Berlin was one of the liveliest cities in the world in 1928, although many of its greatest artists would soon be in exile in the United States. When The Threepenny Opera opened, Berlin was a literal garden spot; over half the city lush with gardens, parks and forest. Audiences could choose between Max Reinhardt’s Shakespeare productions or one of three opera companies, under conductors Bruno Walter, Otto Klemperer and Erich Kleiber. Alban Berg was basking in the success of his opera Wozzeck and was about to begin Lulu. Einstein lived in Berlin, and W.H. Auden and Christopher Isherwood wrote there; Vladimir Nabokov was giving tennis lessons to subsidize his writing. Of course, sexual pleasures of all varieties were available, much to the delight of film actress Louise Brooks, who arrived to make Pandora’s Box with director G.W. Pabst.

Composer Kurt Weill was born in Dessau, Germany on March 2, 1900. He died 50 years later, never having heard Bobby Darin’s finger-snapping hit version of his “Mack the Knife” written for The Threepenny Opera in 1920s Berlin. But, Weill intended to write hit songs, as well as more complex music, and probably would have been pleased. The Gestapo were coming to arrest him when he fled Germany in 1933, and his considered America to be his true home–the best place in the world the New York City drugstore where he could buy his favorite ice cream. Before The Threepenny Opera was a stage sensation, he had been purely a concert composer. He revered Mozart’s music and longed for the vital give and take of Mozart’s audience. Living and working in the US, he felt the Broadway stage was a middle ground between the lifelessness of the opera house and the rampant commercialism of Hollywood. “I have never acknowledged a difference between serious and light music,” he said, “only good music and bad music.”

Kurt Weill met George and Ira Gershwin in Berlin in 1928. Weill was a great admirer of Gershwin’s ability to compose both concert and show music, and of American music in general. He had illuminated his love for jazz in Das Lied von Hoboken, named after that part of New York so famous for African American popular music. After he arrived in the States, one of the first things he and his wife, Lotte Lenya did, as so many before them, was to look for this mecca. After taking the ferry to New Jersey, they learned the place they were looking for was not Hoboken, but Harlem.

The Threepenny Opera was a hot property, a huge theatrical hit that had influenced a generation. The battles that were to ensue over its transition to the screen began almost immediately. Interestingly, it was the author of the play who wished to change it. Berthold Brecht’s politics had become increasingly Marxist, and he wished the play to reflect his stricter ideology. Director G.W. Pabst understandably wanted to make a recognizable version of the stage hit. After reading Brechts completely re-written story treatment, the producers tried to buy him off. Infuriated, Brecht sued the film company, with Weill joining in because they had tried to insert some music into the score written by another composer. The court split the suit into two actions, Brecht losing his case and Weill winning his.

For all that, the film is still quite different from the stage play. There was a great deal of transposition, cutting, songs eliminated and reassigned. Most notably, Lotte Lenya now sang the song that would become her signature, Pirate Jenny. In spite of the differences, the satiric edge of the original isn’t entirely lost, although the whole presentation is considerably more romantic. A modern viewer is struck by the sharp feminist subplot, which was not in the original play. When the film was reissued with new subtitles in 1960, some reviewers found this aspect of the film ludicrous, although it now appears piquantly fresh. The play’s sets were stark, and surrounded by signs with inflammatory phrases written on them were meant to provoke the audience into taking sides. The stylized underworld of the film is wreathed in swirling dust and smoke, real and fantastic at the same time. Pabst made the film in both French and German; multiple language versions were common in early talkie days.

Some considered Pabst Europe’s best director, the one who preserved the best of the silent era while using sound creatively. But, the Nazis soon banned his pictures. He had worked on and off in the States, even directing a film in Hollywood in 1934. He resumed his career in France, but then returned to his native Austria to collect his mother before emigrating to America. His timing was bad; travel was halted when Germany invaded Poland, and Pabst was trapped inside the Reich. He made two films for the Nazis, but his first film after the war denounced anti-Semitism and won the Best Director Prize at the 1948 Venice Film Festival. He died in 1967. 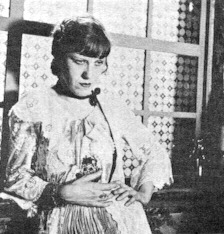 As with most of Weill’s hit songs like “The Saga of Jenny” from Lady in the Dark and “September Song” from Knickerbocker Holiday, “Mack the Knife” was dashed off at the last minute. John Gay’s 18th century, The Beggar’s Opera had been transposed to a late Victorian time period, and the leading actor had commissioned a smart tailor to make him an outfit the authors thought much too flashy. They decided to introduce him with a “moritat” a traditional type of ballad about legendary criminals that used to be sung at German street fairs. Some say Brecht hummed or whistled the melody for Weill after writing the poem, Weill said the sound of the music came out of the Berlin traffic while riding home on the streetcar. Either way, that melody more than any other evokes Berlin in the 1920s.