“A Secretary is Not a Toy” opined How to Succeed … and finally, secretaries wreak revenge as feminism changes offices forever. Tomlin as a veteran, Fonda, the new “girl”, and Parton, the innocent accused of being the office tramp make a crack comic team.  “This picture is a lot of fun” (Variety). Fox Archive Print

In 2012, I programmed a Mad Men series of films at the North Carolina Museum of Art about office life, and one of the earliest was The Best of Everything, a three-heroine film about the new secretary in an office, her friendships, aspirations and love.  Nine to Five is that same story, decades later, with the office worker culture essentially unchanged, until the women take their fate into their own hands.  If the film “offers only dream solutions” (Zaniello) it’s worth reminding audiences that you catch more flies with honey than with vinegar.

Nine to Five, an enormous hit for Fonda’s production company IFC Films, came between her notoriety as Hanoi Jane, and activist whose antiwar stance enraged many, and as an aerobics entrepreneur.  This was the most distinguished stretch of her acting career, in the 1970s, she had been nominated for an Oscar five times, and won for Klute and Coming Home. Her last big hit had been The China Syndrome, and she and her activist husband, Tom Hayden, had just returned from an exhausting tour of the country demonstrating against “unbridled corporate power” (Anderson 220). 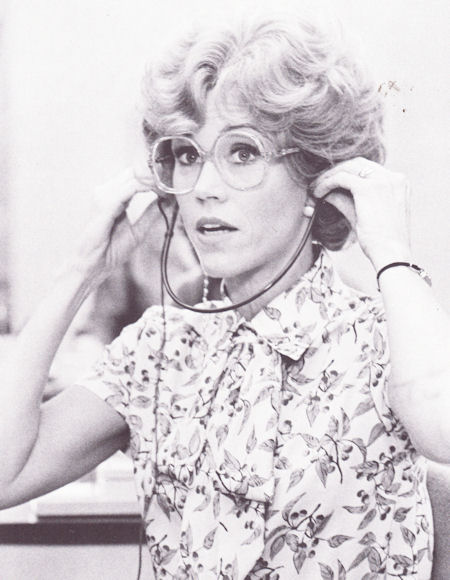 Fonda dressed for character, not glamour

Fonda’s interest in the subject of oppressed secretaries began with memories of her own brief tenure as a secretary in The Paris Review, where she always said, “I was fired when I wouldn’t sleep with the boss” (Anderson 222).  She was also sensitized to the way female workers were treated within her husband’s own political organization, even while representing the rights of a Los Angeles secretaries’ organization. The second wave of feminism was born when female civil rights and anti-war protesters realized they were still getting the coffee, even as they were agitating for others. In her autobiography, Fonda credited her friend Karen Nussbaum for raising her consciousness about office workers, about women who were passed over time and again for promotion, and clerical workers at wealthy companies making so little, they were eligible for food stamps.

Her IFC partner, Bruce Gilbert, was training to be a developmental psychologist, not a Hollywood producer, when he began to work for Fonda at her production company.  He had been a pink-collar worker himself, at the Blue Fairyland Day Care Center.  Because of his academic background, he was an excellent researcher.  He spoke with dozens of secretaries at Cleveland Women Working about their oppressive working conditions.  Gilbert said, “We asked the women to tell us about their jobs and their complaints, and we found again and again that the major problem was in the area of self-respect.  They felt you can run an office without bosses, but not without secretaries” Fonda adds, “one of the stereotypes I had heard about secretaries was not true. I’d heard that these women didn’t like their work, that they would be doing something else if they could.  But, without exception, the women I spoke to liked their work.  They had become independent and liked that, too.  And they all recognized the importance of what they do.  It is important work.  It’s skilled work.  The problem isn’t with the job so much as how management threats their secretaries, showing a lack of respect that reflects itself, in wages, lack of promotion and the menial tasks they’re asked to do” (Haddad-Garcia 246). 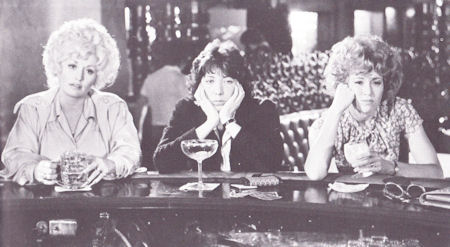 The interviews asked conventional questions, but then, Gilbert had an inspiration. “It all came about when, on a whim, I began asking the women if they ever had had fantasies about getting even with their bosses.  The answers were so funny, and their fantasies were so bizarre, that we decided that the picture just had to be a comedy.” (Davidson 225). Writer Patricia Resnick, who penned the original story for Nine to Five, went undercover as a secretary in an employment agency and an insurance company, and collaborated on the script with ace comedy writer Colin Higgins (Harold and Maude) who, this time, also directed.

Fonda wanted actresses who would contribute to the box office appeal of the film.  Lily Tomlin was a break-out star from television’s Laugh-In, her prissy Ernestine, the telephone operator, had always been a favorite of Fonda’s.  She was just beginning her acting career, but had already been nominated for an Oscar, in Robert Altman’s Nashville. Dolly Parton, a queen of country music was signed, because Fonda said, her “outrageous boobs, outrageous clothes and outrageous talk always had me broken up whenever I watched her on tv” (Davidson 225). This was her first film role. 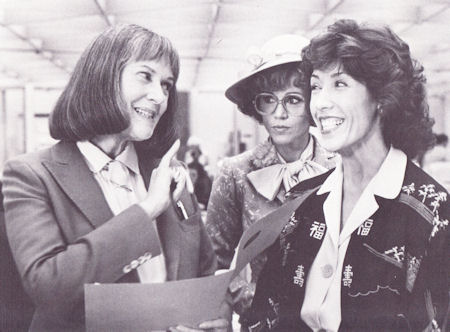 Elizabeth Wilson as Roz, the office snoop, Fonda and Tomlin

Fonda knew all along that her character would not be as prominent as Lily Tomlin’s and Dolly Parton’s.  She researched her role by talking to women who had entered the workplace only after being widowed or divorced. “These were women who had been defined by their husbands all their lives.  You know, all the decisions were made for them.  What they wore, what they did on their vacations, what they did on weekends…now they were in their forties and on their own.  One thing that they all told me was how they arrived overdressed on the first day.  How they felt out of place.  So, I asked our costume designer, Ann Roth, to overdress me.  Give me a hat, an uptight suit.  Make me look out of place” (Anderson 222).  This first day mistake also an echo of The Best of Everything.  A million dollars was spent on the office set, which was the same stage used for Desk Set, with Spencer Tracy and Katharine Hepburn. We’ve seen a lot of office sets in this series! 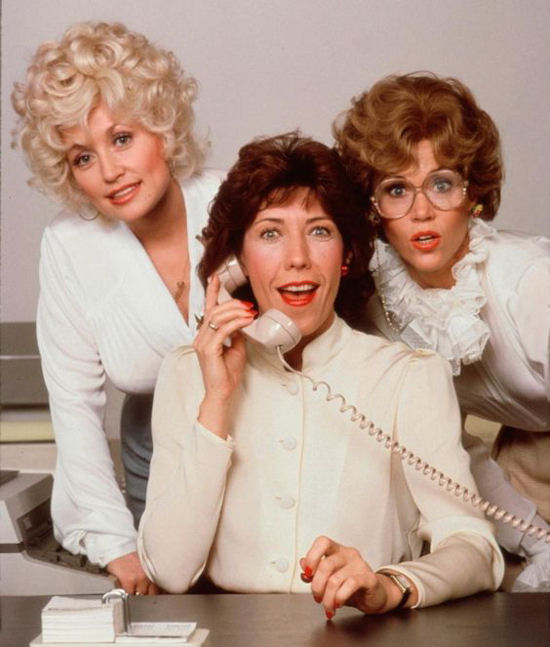 Nine to Five is slapstick, which is why Fox denied Fonda the right for the secretaries to kill their boss, the original ending.  Although there have always been films of female friendship, this film is unique in that the friendship had political overtones.  The women’s shared intimacy is over workplace issues, not the emotional territory of most “women’s” films, men and children. It could never be insulted by the term “chick flick.” The use of female solidarity to reform the office environment is unusual, “Its optimistic celebration of female solidarity and of moderately reformist feminist goals stands in welcome contrast to the use of female friendship in other films merely as a way to denigrate women’s career achievements and affirm the primacy of men and domesticity in women’s lives (Hollinger 110).  Or, as in The Best of Everything, to strongly hint that when a woman focuses on her career, it is a portent of loneliness and isolation away from the contented women who know their place.

The film got mixed reviews; many (male) reviewers felt threatened by the thinly veiled feminism.  But David Anson of Newsweek wrote, “If Oscars were given for the casting coup of the year, Nine to Five would win hands down.  Demographically speaking, those three names constitute a star-studded net from which no prospective movie goer can be expected to escape.  And, since the three portray secretaries who literally take arms against their ogre of a boss, the comedy should prove irresistible to every working woman in America” (Haddad Garcia 249). 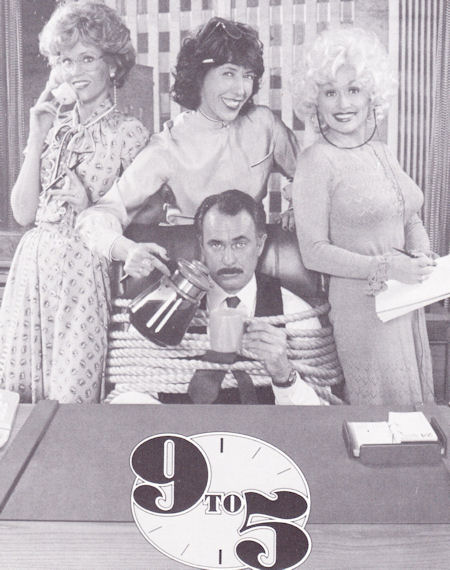 Anson was right.  The public loved it and it was a blockbuster, propelled in part by the hit song written by Dolly Parton, which I’m sure a lot of you can sing before you even hear it in the film tonight.  It did NOT win an Oscar for Best Song (it was beaten by “Fame” from the film of the same name). Dolly Parton won two Grammys for it, though, for Best Song and Best Female Country Performance. 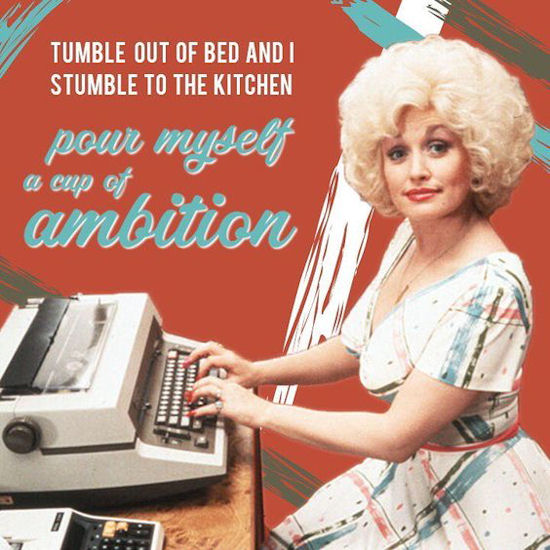 The film was seen by pretty much every 9 to 5er in the US. Karen Nussbaum, who helped inspire Fonda to make the film, loved watching it with audiences.  “I remember being in the theater one time and in the scene where you (Fonda) are working the Xerox machine and it goes wild, a woman stood up in the middle of the theater and yelled out ‘push the star button!’” Women reacted quite vocally to the screen, and this one strong instance of popular culture sparking debate about real issues.  Nine to Five helped spearhead a national union, the Service Employees International Union.  But it was a hit because men loved it too—because who hasn’t worked for the boss from hell? 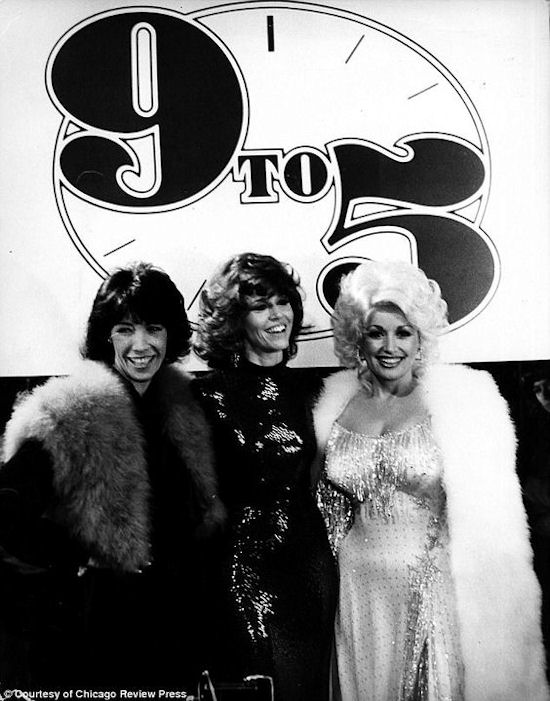 Here is a shot from the premiere. I think Fonda is wearing a Norman Norell “mermaid” sequin dress–or, maybe not, she often wears monochromatic sequin column dresses on the red carpet.

Sources include:  Working stiffs, Union Maids, Reds and Riffraff by Tom Zaniello, The Films of Jane Fonda by George Haddad-Garcia, Jane Fonda: An Intimate Biography by Bill Davidson, Citizen Jane: The Turbulent Life of Jane Fonda by Christopher Anderson, In the Company of Women by Karen Hollinger, My Life So Far by Jane Fonda. B&W photos from Haddad-Garcia.