Exiled to the sticks, a big city newspaperman creates a media circus around a mine cave in, and crosses ethical lines as he exploits the story for selfish gain.  “Here is, half a century out of the past, a movie so acidly au courant it stings: a lurid pulp indictment of exploitation, opportunism, doctored intelligence, torture for profit, insatiable greed, and shady journalism.” (Village Voice).

Film noir is often associated with dark enclosed spaces, and a couple of the films we’ll be seeing in this series contrast urban claustrophobia with the wide open.  Ace in the Hole was filmed outside of Gallup, New Mexico, on the largest non-combat set ever constructed for a film to that point.  Like On Dangerous Ground which we’ll see later on in this series, our unreliable anti-hero finds either corruption or redemption…or both, under the big sky

Ace in the Hole also notable for being the biggest flop of Billy Wilder’s career, although some now consider its anticipation of tabloid culture and the exploitation of the relentless 24 hour news cycle as psychic. It joins Fritz Lang’s Secret Beyond the Door, the biggest flop of HIS career in our lineup.  I didn’t plan it that way, but there it is. 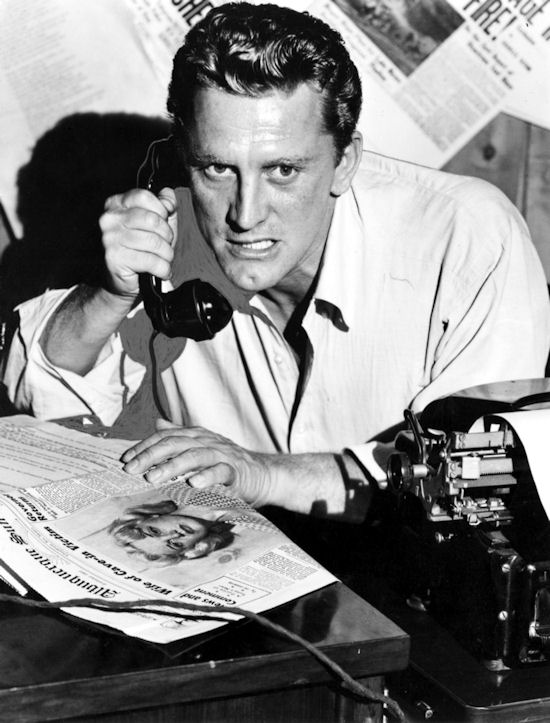 Ace in the Hole was the first film Billy Wilder directed after Sunset Blvd, and the first after parting from his long-time collaborator, Charles Brackett.  His new partner was a young radio writer, Walter Newman, who suggested an idea that Wilder pounced on, about a mine cave in and the cynical reporter who exploits it.  The plot was loosely based on a famous tabloid story of the 1920s, in which Floyd Collins was trapped inside a Kentucky cave he was exploring. Collins’ family owned the cave, which is part of the Mammoth Cave formation, and he was spelunking around, hoping to find a new entrance to increase tourism.  Wedged in by falling rock, he was trapped only 150 ft inside the entrance, so reporters could talk to him. Sadly, rescuers were unable to reach him in time. A Louisville Courier Journal reporter covered the story, and turned it into a Roaring 20s media circus, winning the Pulitzer Prize in the process. Fresher in public memory was a story from 1949, about a little girl named Kathy Fiscus who had fallen down an abandoned well in a Los Angeles suburb.  The tragedy turned into a farce, as Johnny, the Philip Morris cigarette midget, among others, turned up to help, and the rabid crowds gathered, once again without being able to save her.

Lesser Samuels, a playwright, joined  Newman on a script originally called “The Human Interest Story.”  Wilder had himself been a reporter in Vienna and Berlin in the 20s and brought his own ink-stained experience to the project. He commented, “The dramatist who sets out to write on a social theme should not get angry.  He should keep his own temper while driving his audience to anger…In Ace in the Hole we indict morbidity and lust for others but we try to do it so subtly that the onlooker will both laugh at and deride some of our characters before slowly realizing he is, perhaps, pointing the finger at himself” (Sikov 313). 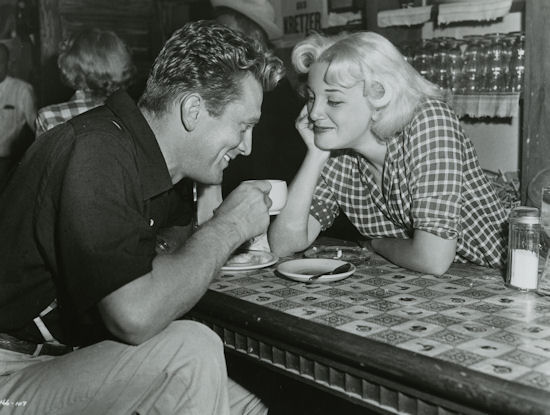 Wilder wanted Kirk Douglas to play the lead. Douglas was a tough, hard-driving person on and off screen, and had just become a hot property in the 1949 boxing drama Champion.  Warner Brothers did not want to lend him out, but the lawyers eventually settled it, and Douglas would appear in Wilder’s film for a fee of $150,000. Douglas said, “I enjoyed working with Billy Wilder. He’s a brilliant writer, and a great raconteur. He was always saying amazing things. Joking, he would very often hit the truth” (Douglas 177).

Opposite him was cast Jan Sterling. She was a cultured New Yorker with a private school education, who attended drama school in London. But, she was often cast as cheap looking bad girls.  She gets the film’s best line, which Wilder was quick to credit to his wife, Audrey. She alternated during her career between stage and screen. Following Judy Holliday as Billie Dawn in Born Yesterday on stage, she landed a Hollywood contract, but not for the part that had brought her to Los Angeles. She was nominated for an Oscar for Best Supporting Actress in The High and the Mighty, although her film career waned at the end of the 1950s. 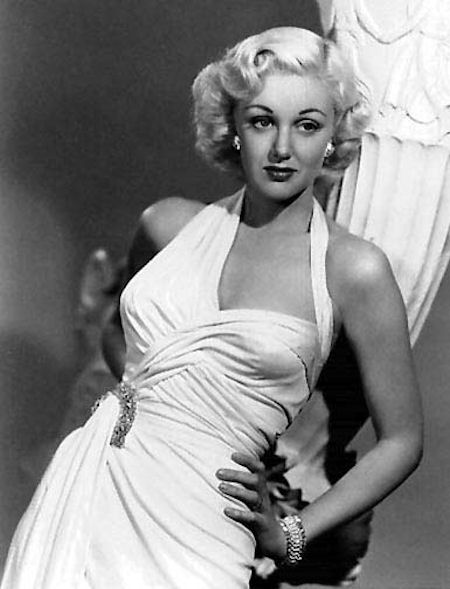 The film cost a little under $2 million, and shot for 45 days, most of it on location. .Wilder correctly guessed that gawkers (and their cars) showing up at the film set could be easily hired as extras. On one filming day, there were 1200 extras and over 600 cars and trucks, mostly locals. 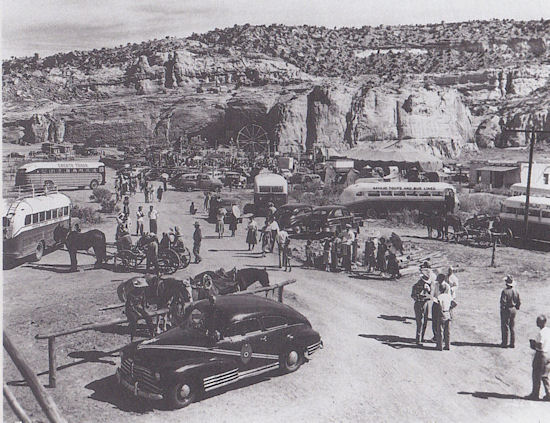 The set outside of Gallup, New Mexico

The Hollywood Reporter’s scathing review was typical, “Ruthless and cynical, Ace in the Hole is a distorted study of corruption and mob psychology that, in this reviewer’s opinion, is nothing more than a brazen, uncalled for slap in the face of two respected and frequently effective American institutions—democratic government  and the free press…(the film) proceeds on the premise that Americans are a bunch of dopes, easily duped, victims of mass hysteria and emotionally placated by vicarious experience” (Sikov 326).  In short, the film was considered, during the McCarthy era, to be “un-American.”  In 1951 the main source for film reviews were newspapers, and in Douglas’ opinion, and many others, they did not like their reflection in Wilder’s scathing film. The studio panicked and renamed the film The Big Carnival, which didn’t help. How would it make America look abroad? reviewers wondered.  In fact, it was much better received in other countries than it was at home.  It even won the Golden Lion, the top prize at the Venice Film Festival. 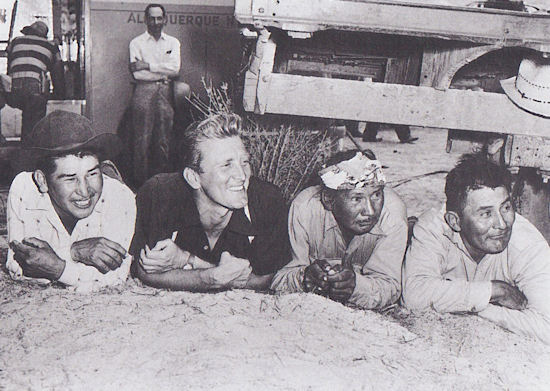 Ace in the Hole did get an Oscar nomination for story and screenplay.  Screenwriter Newman was also Oscar nominated for Cat Ballou (for which Lee Marvin won an Oscar) and Bloodbrothers with Richard Gere.  Newman said working with Wilder was “enchanting, illuminating, constantly exciting, filled with laughs, gilled with good talk, constant surprises…I think he’s the very best of us in all departments” (Lally 215).  Wilder must have had similar fond feelings about Newman, he gave him the cane Gloria Swanson had used for her Chaplin imitation in Sunset Blvd. 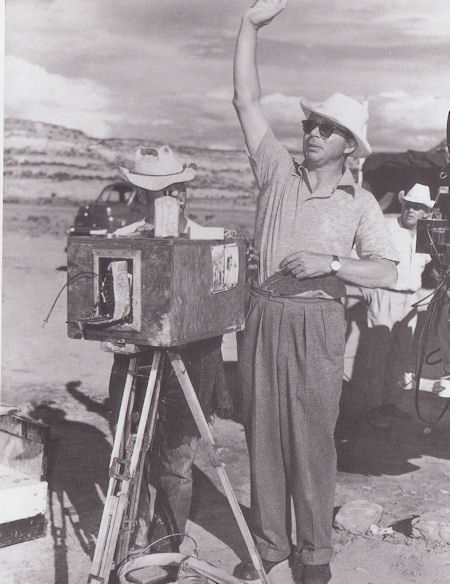 Billy Wilder on location in the New Mexico desert

By the time Wilder died at 96 in 2002, many critics considered this film his masterpiece.   The last of his four film noirs, “one of the most cynical visions of human greed on film” (Rough Guide 33). Michael Atkinson wrote in the Village Voice’s obituary, “Wilder’s freshest movie may be the one he was review-lynched for in 1951.  Ace in the Hole, a corrosive essay on amorality in the badlands that has Kirk Douglas sacrificing a trapped miner for the betterment of his newspaper career.  Here Douglas is the ultimate hotdiggity carpetbagger, and the depths of viciousness the film excavates the film remains shocking, right down to the scissors in the belly….Happy to expect the abject worse of his fellow man in his films, Wilder was never cynical about his audience.  ‘Every single person out there is an idiot’ he once said ‘but collectively, they’re a genius.  The contradiction couldn’t have ever disturbed such a cheerful misanthrope.” 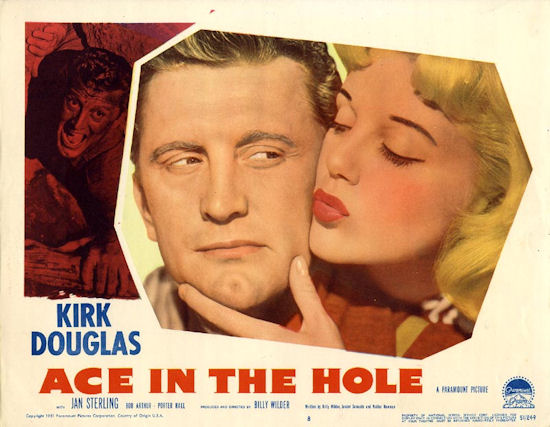 On Sunset Boulevard: The Life and Times of Billy Wilder by Ed Sikov, Wilder Times: The Life of Billy Wilder by Kevin Lally, Obituary in the Village Voice April 9, 2002, Conversations with Wilder by Cameron Crowe, Rough Guide to Film Noir by Alexander Ballinger and Danny Graydon, The Ragman’s Son by Kirk Douglas, Jan Sterling’s obituary in The Guardian UK, Wikipedia entry on Floyd Collins, location photos from 100 Years of Filmmaking in New Mexico, published by New Mexico Magazine, a cool book without an index. Tsk tsk.