Married attorneys Adam and Amanda Bonner spar in and out of the courtroom, in Adam’s Rib, the best of the Hepburn-Tracy films. A satire of rigid gender roles, the film has a light touch and witty switcheroos. “One of the most perfectly rounded comedies of the Golden Age, as time passes, it seems only more modern, loving and wise” (Patrick McGilligan).

George Cukor began his sparkling collaboration with screenwriters Garson Kanin and Ruth Gordon with the proto-feminist comedy, Adam’s Rib. The Kanins incorporated elements both of Hepburn’s politics and Tracy and Hepburn’s personal relationship, which was unknown to the general public, into the script. The stars lived together in a house on Cukor’s estate, and he acted as confidant and protector, especially to Spencer Tracy who was one of Cukor’s closest friends, in spite of their many temperamental differences. He directed Tracy more often than anyone else and greatly admired his acting skills. Cukor liked to go to the rushes and see the subtle emotions in Tracy’s face on screen that he couldn’t see on the set. Cukor directed Hepburn in her first film, A Bill of Divorcement, and in many thereafter, including Little Women, Holiday and The Philadelphia Story.

For the record, Hepburn said that her 27 years with Tracy was blissful, but in fact it was not always so. The late 40s was a particularly rocky time, as Tracy was drinking a lot, and his eye was roving. “Hepburn was hemmed in and worn out when Adam’s Rib finally established the intimate, home-movie interplay and beloved status of the partnership—in 1949, the year that Ingrid Bergman was run out of American movies for being an adultress. The ‘Tracy and Hepburn’ routine was already pat in its mixture of feistiness and comfort, and the pair exemplified what later feminists would gratefully view as ‘an ideal relationship celebrating the most happily integrated emancipated woman of the era.’ At the time, however, the woman was in need of emancipation from nothing so much as the relationship itself.” (Pierpont). In fact, part of Hepburn’s spark in this film emanates from her private decision to liberate herself somewhat from Tracy off screen.

There are no cults dedicated to worshiping Tracy, who played a leading man arguably without much in the way of sex appeal. He rarely romanced younger women on the screen, let his hair turn white and did nothing to retain a youthful figure. But his artistry continues to be admired and his acting aphorisms quoted, as Brian Dennehy did in a tribute to Tracy on his 100th birthday: “Sincerity is the hardest part of acting. When you can fake that, you really have it made.” 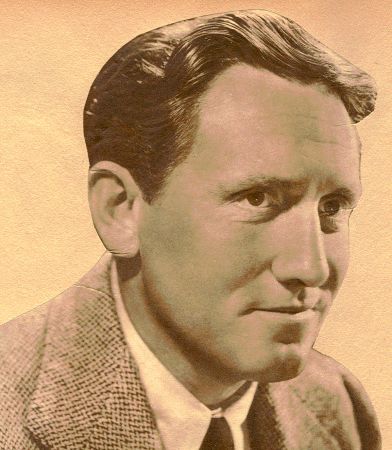 Tracy had many personal demons. He met and married Louise Treadwell in 1923 while acting in stock. When their son John was born deaf, Tracy turned to alcohol (a family demon) and his wife dedicated herself to their son’s care, becoming an effective and influential activist for the hearing impaired. Tracy was one of the most notorious binge drinkers in Hollywood, and required constant vigilance to stay sober. Hepburn nursed him through many an episode, even suspending her career towards the end of his life to nurse him through the combination of alcohol-related illnesses that would kill him.

Tracy and Hepburn had different approaches to acting. He didn’t care about the script and never rehearsed, preferring to do a scene in one take. Hepburn loved worrying over script details, conferred extensively with the Kanins and Cukor and then would happily do 20 or 30 takes of a scene with difference emphases and interpretations. On the set, they were always willing to let the other upstage them. Once Cukor remembered, he had to insist, “I can’t see either of you, I really can’t!”

His philosophy of directing stated, “a director should make a climate where people can make fools of themselves with freedom” but he loathed the whole idea of improvisation. Naturalism was attained by skill, not accident. He incorporated Hepburn’s strong feminism into the part (although with some of the compromise that is inevitable in this era’s movies) and showed a revolutionary picture of individuality in marriage. As James Harvey says, “the battle is at least a draw.”

Just before shooting began, Cukor spent a week attending the trial of Betty Ferrari, who had been accused of stabbing a man. He noted not only authentic details of courtroom procedure, but the appearance of the defendant, who looked rather hard-bitten at the beginning of the trial, but whose expression and wardrobe softened as her defense progressed.

Married screenwriters Garson Kanin and his wife Ruth Gordon brought a particularly warm repartee to the proceedings. Richard Corliss describes the Bonners’ interchanges “less underwritten than overheard.” They also brought a lot of eccentric phrasing to the dialogue of the characters played by Holliday, Ewell and Hagen.

Cukor used four stage actors for the first time on the screen, Judy Holliday, Tom Ewell, Jean Hagen and David Wayne. Hepburn, Cukor and Kanin all plotted to get Holliday the scene stealing notices that would allow her to recreate her stage role in Born Yesterday also directed by Cukor and scripted by the Kanins. Holliday’s jailhouse confession was done in a long take focused on her, because Cukor insisted that only Hepburn’s voice was necessary to register her strong presence in the scene. Ewell would go on to excel as Marilyn Monroe’s foil in Seven Year Itch, and Jean Hagan as the screechy-voiced Lina Lamont in Singing in the Rain.

David Wayne also starred with Monroe in How to Marry a Millionaire. His character’s arty and sophisticated tastes offer a contrast to the Bonners’ more conventional tastes in the comfy duplex across the hall. The Production Code cautioned, “There should not be the slightest intimation that Kip is a pansy.” But, to a more modern eye, of course, no other interpretation is possible.

The collaborations between Cukor, the Kanins and Tracy and Hepburn are unique. “The kind of comedy they created—wry and generous, pertinent and impertinent, modest and rather serene died away.” (Corliss). 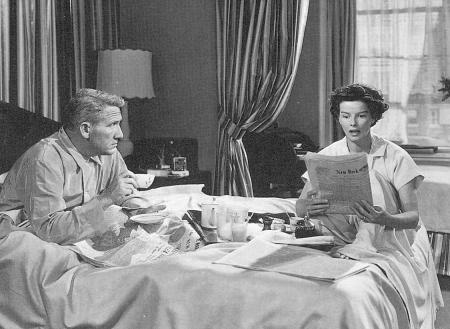 The film was shown with the short “Vout-O-Rooney” starring hepcat Slim Gaillard. He is one of those figures at the interesting intersection between jazz, r & b and the leading edge of what would become rock and roll. He spoke 8 languages, but devised his own language, which he called Vout; he even wrote a dictionary for it. This low tech short was filmed in 1946 in Billy Berg’s Los Angeles nightclub. Gaillard plays piano and electric guitar, with Tiny Brown on bass and Scatman Carrothers on drums. In between “Dunkin’ Bagels” “Dynamite-O-Rooney,” “Spanish Melody” “Chili and Beans” and “Laguna” Slim mumbles some groove-juice-a-rooney introductions. Vout.