“If you’re like me, you’ll be humming the final song to Amar Akbar Anthony for some time. You’ll also be having some odd dreams about giant Easter eggs, WILD, WILD kung-fu back-flips, beautifully appointed death lairs and perhaps something I still can’t purge from my mind—the insane costumes of evil American bodyguard Zebisko. My favorite was certainly the black t-shirt with the small cartoon whale” (Steiner). I can’t believe that I almost didn’t tape this movie off TCM’s Bollywood tribute in the summer of 2003, but Steiner’s on-line film notes made all the difference. A new favorite: there is no other movie quite like Amar Akbar Anthony.

Bollywood conventions evolved from traditional Indian styles, where music and dance were inseparable from drama; there weren’t even words to describe a play without music. These classic works were quite long, and had to evoke all the emotional states, which accounts for the sometimes puzzling genre-busting qualities of popular Indian films—and this one in particular. By the 1940s, the separate genres of “Urdu Parsee plays, Hindu mythologicals, music, song and dance, action and stunt, which were treated as separate genres in early movies, were regularly being mixed together into a single picture, establishing forever the prototype of the Hindi film” (Kabir). While the Indian art film disdains the use of this “masala” formula, it is vital to the Bollywood aesthetic. “These masalas bring to Hindi films a flavour that is similar to the effect that spices have on Indian cuisine. It is believed since ancient times that spices give rise to feelings, or rasas. These rasas, as listed in Bharata’s Natya-Shastra are Shringara (the erotic) Hasya (the comic) Karuna (the pathetic) Raudra (the furious), Vira (the heroic), Bhayanaka (the terrible) Bhibhatsa (the odious), Adbhuta (the marvelous) and Shanta (the serene)” (Kabir). AAA is the apotheosis of the masala style as well as the lost-and-found-family drama, made clear even before the opening credits (which arrive half an hour into the film). Director and choreographer Farah Khan says, “What is saving Indian cinema from being engulfed by Hollywood is our song and dance routines, because they just can’t imitate that” (Kabir). And she ought to know, having made a wonderful contribution to the genre herself with her first directorial effort, Main Hoon Na (2004).

The plot, which may take more than one viewing to completely decipher, concerns three brothers, separated in childhood and raised in three religions, Amar joins a Hindu family and becomes a police officer, Akbar is raised by a Muslim tailor, and Anthony, adopted by a Catholic priest, becomes a street-saavy hoodlum. 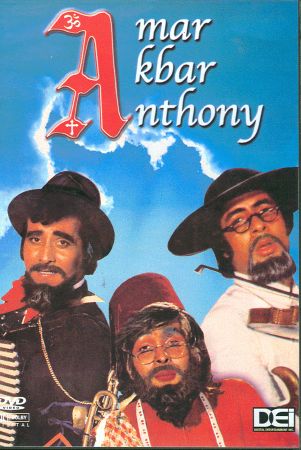 Amitabh Bachchan is not top-billed in the cast, as he was just beginning his movie career in the mid-70s. But this film, along with Dewaar (The Wall), Zanjeer (The Chain) and especially Sholay (Flames) made the tall, lanky actor an icon. He is often referred to as India’s greatest movie star, and to many in India and throughout the Indian Diaspora, he is the greatest movie star of all time, period. In a 2000 BBC online poll, he beat out Laurence Olivier and Alec Guiness for the title Best Actor of the Millennium.

Amitabh reminisced in a monumental book written to celebrate his 60th birthday, “When (director) Manmohan Desai narrated the subject of Amar, Akbar, Anthony, I was flummoxed. I’d never seen or heard of a guy like Anthony. I laughed out loud. ‘Man’ what kind of a movie are you hatching? And he retorted, Look, as soon as it is released, people on the streets will call you Anthonybhai. And, he was so right.

“Throughout the making of Amar, Akbar, Anthony, it was one helluva fun ride. Whether it was handling that Liliputian horse tonga, sweeping the floors to get on with the next scene, it was all one combined effort. There was laughter, gaiety…a fantastically big cast…and ‘Man’ kept us all going. Even the most ridiculous moment was meticulously planned.

“The only scene that was spontaneously done in Amar, Akbar, Anthony was my drunken scene when he wasn’t present on the sets. He’d left the scene to his assistants…he’d rushed off to shoot a portion of the Parvarish climax, which was being filmed simultaneously. He’d be flitting from one set to the other. I told his assistants that I’d do the drunken scene based on my observations of someone who’d get punch drunk on Calcutta’s Park Street…after having two or three too many” (Mohamed). 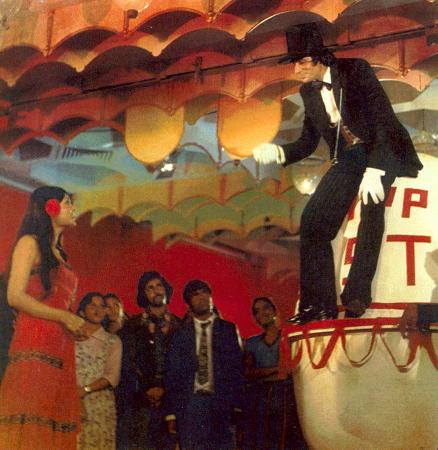 Parveen Babi and Amitabh Bachchan (aided by playback singer Kishore Kumar) frolic through the unforgettable “My Name is Anthony Gonslaves.”

The acting style of many Hindi film stars is considered a bit over the top, which is one reason these films suffer a kind of cultural isolation. But, Amitabh’s signature performances are unique. I’ve shown this film to many people as a “gateway drug” to Hindi cinema, and his goofy anti-hero Anthony Gonsalves transcends temporal, language and international boundries. In these early films, Amitabh often wore his own clothes, so one may interpret a love for white bell bottom trousers as his own. AAA became an important part of his star mythos, although, as the academics say, “The masquerade presented by the film helped create an autonomous cult image for the star, which, because not anchored in a coherent narrative, could not be deployed henceforth as a brand image in disparate contexts.” (Rajadhyaksha and Willemen). 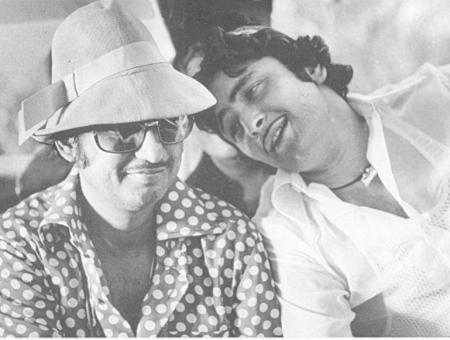 Other cast notes: scenery chewing Jeevan, (as Robert) and his overacting rival Pran, are two legendary Bollywood villains. Long-suffering Nirupa Roy was by this time the veritable symbol of virtuous Hindu motherhood. Vinod Khanna doesn’t make much of an impression as Amar, the upright police inspector, although Rishi Kapoor (son of mid-century movie idol Raj Kapoor) does have a bit more character to work with as the mischievous Akbar.

Shabana Azmi, Neetu Singh, and Parveen Babi are the heroines whose religious faiths match those of their boyfriends.

Vijay Mishra in defending the Bombay film aesthetic suggests its critics “were bound to valorize art cinema over and above the popular because the controlling eye of high modernist directors (Bergman, Fellini, De Sica, Satyajit Ray, for instance) is more readily discernable in works that have a self-conscious aesthetic intention and where, for obvious reasons, there is considerable directorial control…too many other factors contribute to the creation of popular cinema.” But, every national cinema has included escapist films as well as serious ones, and they are just as important, complex and culturally indispensable. And, none are more enjoyable than Amar Akbar Anthony, described by Ashok Banker as “the pinnacle of Bollywood kitsch” and a must-see on any list of Hindi films. What are they so satisfying? Amitabh himself concludes, “Hindi films provide poetic justice in just three hours—a feat that none of us can achieve in a lifetime, or in several lifetimes.” (Kabir). 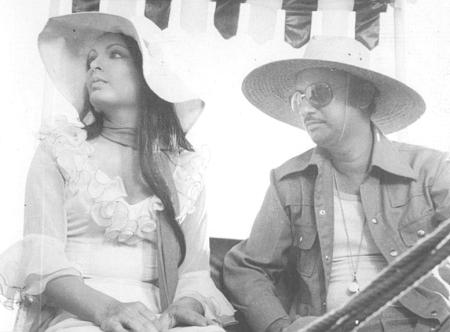 “Who wants to see realism? People in the West! There’s always some bright aspect, even to a poor man’s life…I’m saying there should be humour in a film. These art filmmakers think humour is a sin, it’s a cardinal sin for a person to laugh in the auditorium, according to them. What’s wrong with a person having a bit of enjoyment on the theatre?” –Manmohan Desai (Haham)

Dilwale Dulhania Le Jayenge by Anupama Chopra, Bollywood: Popular Indian Cinema edited by Lalit Mohan Joshi, particularly the essays “Classics and Blockbusters by Pratik Joshi, “Heart of the Movie” by Maithili Rao and “All Time Greats” by Kavita Mehta, Pocket Essential Bollywood by Ashok Banker, Cinema India: The Visual Culture of Hindi Film by Rachel Dwyer and Divia Patel, Bollywood Cinema: Temples of Desire by Vijay Mishra, Encyclopaedia of Indian Cinema by Ashish Rajadhyaksha and Paul Willemen, “Amar Akbar Anthony” by Richard Steiner on the TCM website, Bollywood by Nasreen Munni Kabir, ”Stereotypes and Clichés by Amir Ullah and Saibal Chatterjee in The Encyclopedia of Hindi Cinema, Bollywood by Tejaswini Ganti, To Be or Not to Be Amitabh Bachchan by Khalid Mohamed, Manmohan Desai’s Films:Enchantment of the Mind, by Connie Haham.