Andaz is one of the first films I saw when I became enamored of Hindi cinema. I loved it for its resemblance to an overheated Bette Davis melodrama of the 1940s (although Warners would have been too cheap to give Davis co-stars the magnitude of Dilip Kumar and Raj Kapoor—Davis would have gotten George Brent and Ronald Reagan), the marvelous performances, the photography and, of course, the clothes. The mixed message in Andaz is wonderfully perplexing. Western influences are denounced as corrupting post-colonial India. But, at the same Nargis is so unbelievably gorgeous in her 1940s hair and contemporary styled wardrobe that the temptations are unmistakable. It was one of the biggest box office hits in India to date, as audiences embraced its theme that India must value capitalist expansion while retaining feudal family values. Thus, Nargis’ clothes ARE the movie.
.
One thinks of saris as an ancient, unchanging classically styled garment, but, in fact, at least as far as the movies are concerned, they are heavily influenced by contemporary Europeanized fashions, if often a little behind the times. Nargis here not only has padded shoulder cholis with keyhole necklines and 40s style brooches, but she wears jungle print saris echoing the prints found on flirty dresses worn by any contemporary film goddess, like Rita Hayworth or Betty Grable.

Andaz’ resemblance to a Hollywood film of the era is no coincidence. Director Mehboob Khan loved American movies, and in fact had just returned from a trip to Hollywood, where he met his idol, Cecil B. De Mille. “And the way he wanted to make his own films was the way the Hollywood movie moguls of the thirties and forties made them—glossy, beautifully mounted and lavishly produced—based, always based on highly emotional and melodramatic subjects” (Reuben). He learned another lesson from De Mille, too, a director who loved to extravagant depictions of sinful behavior, and then the inevitable (preferably religious) reformation. Nargis’ stylishly Western ways are the equivalent of a De Mille film’s flashback to an ancient Roman orgy. 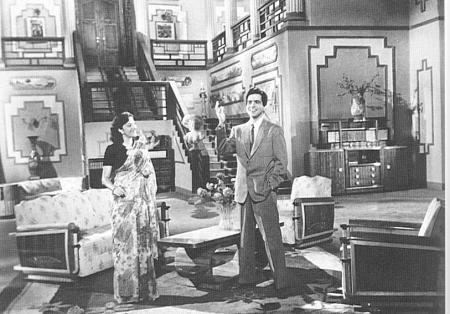 The sets were lavish, Hollywood style

Assembling actors Nargis, Dilip Kumar and Raj Kapoor was a casting coup that no other film would repeat, they were, throughout the 1950s, the three undisputed top stars of the Indian screen. Along with Dev Anand, Dilip Kumar and Raj Kapoor “heralded the new era of youth in Hindi cinema and upset the hold of leading men who had securely occupied top positions until then. Theirs was a magical influence on the youth of the country, able as they were to sway the emotions, mould the thought processes, fashion sartorial taste, hair styles, mannerisms, ideas, sentiments and the behavior patterns of their fans, whose number was legion” (Reuben). Their acting styles were very different from one another, Raj the brash extrovert, with his Errol Flynn-ish looks would later incorporate comedic aspects into his persona. Dilip’s introverted, naturalistic brooding as men torn by conflicting social pressures would for a long time define the romantic Hindi film hero. He was the most recent Hindi film Devdas, in 1955, to precede Shah Rukh Khan’s 2002 Devdas. And, they were rivals behind the camera, as well as in the screenplay. They used all their skills to establish dominance in front of the camera, an intensity which fires their fictional characters, as well. 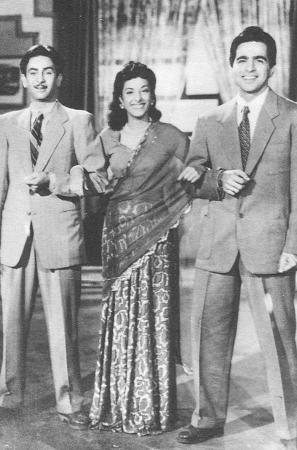 Raj Kapoor was also a director, and he directed Nargis in a number of big, romantic hit films. Their first was Aag; Barsaat, Awaara and Shri 420 followed. Awaara was one of the landmark films of Hindi cinema (and the reason that Iwas inspired to see other films that the couple made, like this one). To me, there is one great difference between the films in which Raj Kapoor directed Nargis and when others, like Mehboob Khan, here. Kapoor was clearly influenced by the films of Orson Welles, and the photography of Gregg Toland—just looking at the rich, deep focus compositions in Awaara, it’s obvious. But, in his films there is a difference in the close-ups of Nargis, too—he was in love with her. You can see the difference between the way she is photographed in the two films, the velvety light and the glamourous sheen in Awaara…Nargis is still beautiful here, but it is different, admiration from a distance. Raj Kapoor was besotted with her, and to this director, she was “just” a very beautiful actress. Nargis’ greatest role was for Mehboob Khan, as the title role in Mother India, an epic, worthy of Mehboob’s guru, De Mille, a film sometimes referred to as “India’s Gone With the Wind.” 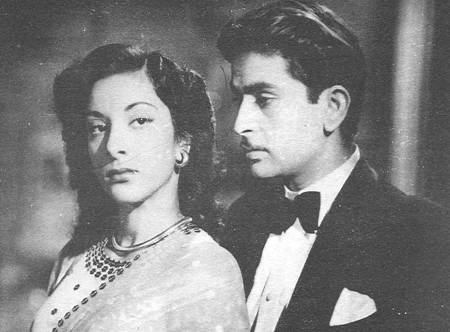 The photo above, and below, the artist’s interpretation: 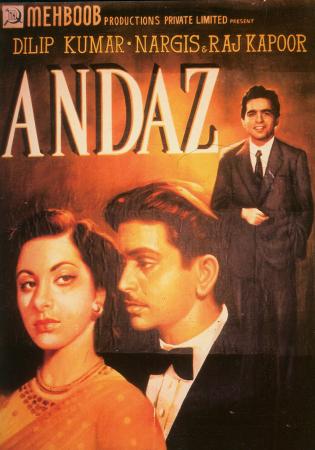 Nargis’ independent character in Andaz, a strong minded feminist that modern viewers can identify with, is a major attraction of the film. Her turbulent emotions, which she seems to be hiding even from herself, are the film’s center. In Indian films of this era (and beyond) the convention is that the heroine falls in love only once, the first time, and never again. The shifting currents between the love triangle are open to interpretation, one of the intriguing qualities of Andaz. When I first saw the film, I was confused by the fact that Nargis and Dilip were living together in the same house, did this alone not compromise her reputation? But, I was told that this would not be an arrangement worth commenting on, since the number of servants and other people living in a big house would not permit Western standards of privacy for any hanky-panky. 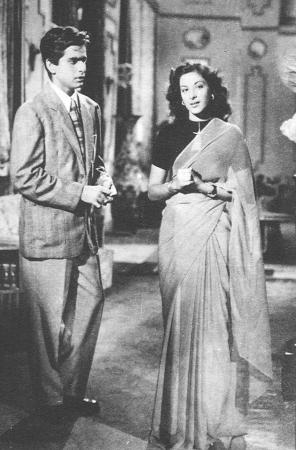 This lavish film with its compelling love triangle is considered to be the first film set in contemporary India amongst the affluent classes. The strong-minded Nargis was a new role model for Indian women, and this film was not only greatly influential in its day, but continues to exert its influence on the many contemporary films which examine the melodramatic travails of the impossibly rich and glamourous. 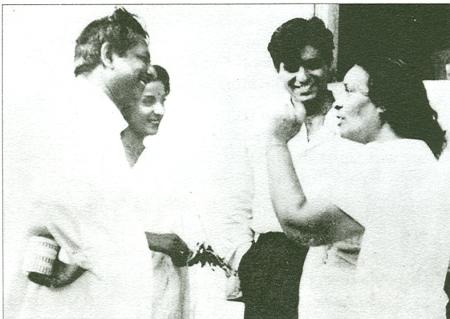 “A Pre-production meeting at Central Studios, Tardeo, where “Andaz” was made, shows the legendary Jaddanbai (extreme right) Nargis’ mother, emphasizing a point to Mehboob, her daughter, and Dilip Kumar.” 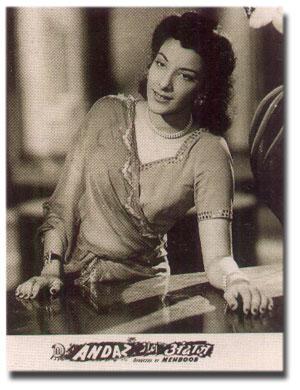