Office peon CC Baxter attempts to scale the corporate ladder by lending out his apartment for executive hanky panky. Oscar’s Best Picture of 1960 is one of Wilder’s sardonic farces, delicately poised between comedy and melancholy. “It’s an early premonition of our modern cubicle politics, and it stings like hell” (Entertainment Weekly).

We begin our Mad About Mad Men Film Series with Oscar’s Best Picture of 1960.  In the course of this series, we will reflect on the cultural changes this last half century has wrought.  Sex outside of marriage was a very shocking topic when this film reached theaters, but the copious amounts of smoking and drinking were not.  These attitudes have completely reversed, as has, thankfully, the condescending manner in which women were treated in an office environment.  I hope, as this series winds its way from January to May, we will have many interesting conversations on the differences between the early 1960s time period of the addictive television series Mad Men and our own.

Billy Wilder said his inspiration for The Apartment was the David Lean film, Brief Encounter, in which a couple borrows a friend’s apartment for their love affair. “What about that friend who has to climb back into that warm bed?” Wilder wondered.

A spicy Hollywood scandal provided more inspiration, when, in 1951, Producer Walter Wanger shot Jennings Lang, a press agent who was sleeping with Wanger’s glamorous wife, Joan Bennett.  The story was, they had trysted at the apartment of one of Lang’s employees, who may have considered the loan a smart career move.

Wilder and his collaborator IAL Diamond wanted to tell the story of a lovable loser, unlike the hard boiled characters the pair often favored. Lemmon claimed that Wilder offered him the part on the way home from the first wildly successful screening of their previous collaboration, Some Like It Hot. For his leading lady, Wilder wanted an actress relatively new to Hollywood, Shirley MacLaine. She accepted based on a few early script pages, and Wilder’s high concept pitch: “This is about a young fellow who gets ahead in a big company by lending his apartment to executives for that grand old American folk ritual, the afternoon shack up.” (Sikov 430).  He could forge ahead with his script because the Production Code was becoming increasingly toothless, and even a Catholic Legion of Decency condemnation had little effect outside the most observant Catholics.

Although MacLaine accepted the part after seeing only a partial script, she said, “I admired the social statement Billy was making, and the extraordinary sophistication he brought to making that statement.  And, I liked the idea that Fran was caught in this maze, like everyone else in the film” (Lally 301). She was taken aback that he insisted that every word in the script be spoken exactly as written, and that he felt the small details of a performance were vital to crafting a character. But, he was never adverse to creative collaboration. When he discovered she played gin rummy with her Rat Pack pals, he incorporated it into Fran’s character, resulting in some of the most affecting moments of bonding in the film.

The coldness of American corporate culture was a theme that struck a chord with 1950s audiences, in films like Executive Suite and The Man in the Grey Flannel Suit.  The Apartment’s black and white photography echoed the look and mood of 40s film noir, and was shot by Joseph LaShelle, who photographed many landmark 20th Century Fox noirs, like Laura.  Visually, Wilder wanted to evoke one of his favorite silent films, the despairing, The Crowd, which begins with the camera singling out the hero as an ordinary fellow working in an impersonal office tower.
The International Style of architecture that began to dominate the post war landscape was clean, modern and featureless.  As James Sanders describes the setting of The Apartment  in his excellent book, Celluloid Skyline, “…we see…a high, flat exterior wall with countless windows, a huge modern box that can hold a veritable city—as big as Natchez, surely—within.  Every window is identical to all others on its floor, every floor identical to those above and below.  We know the nineteenth floor must be in there, somewhere.  But, where?”  Inside, “the character of the exterior continues seamlessly within.  Yet, here that character is not stylish, but foreboding.  The grid of identical desks that fills the sprawling office floor reminds us of nothing so much as the repetitive window grid on the exterior—almost as if the façade had been turned on its side and brought indoors.  We can no more locate Baxter’s desk amidst this endless sea than we could have found the nineteenth floor amidst the vast matrix of windows outside.  Perfection has indeed been achieved inside and out.  Perfect anonymity” (Sanders 134) .

In a contrast, Baxter’s apartment is cozy and warm, the direct opposite of his daytime surroundings.  Although messy, it evokes the solitary life among the big city crowds.  It may be an affordable home for young single people (in 1960, $85 a month, on 67th, one block from Central Park!) but it also is a village, in this case filled with gemütlich Jews.  This is one of the few works in Wilder’s filmography with explicitly Jewish characters, a fact much remarked on by his biographers.  “Be a mensch (a good human being)” becomes the film’s overriding theme, as Wilder juxtaposes the compassion of Baxter’s down to earth Jewish neighbors with the self-centered decadence of his wasp-y workaday world” (Lally 304).

As scripted, C. C. Baxter was not a particularly sympathetic character, like Jerry in Some Like It Hot, others push him around, and he finds it hard to muster any resistance. He feels much worse about his office superiors shameful behavior than they do.  But, Lemmon’s talent, and warmth, made the character appealing, and set the stage for similar characters he’d play throughout his career, such as his Oscar winning turn in Save the Tiger, all the way up to Glengarry Glen Ross.  Casting him opposite 25 year old Shirley MacLaine was also saavy, as Wilder’s collaborator, IAL Diamond said at the time, “There are any number of actresses in Hollywood who can be sexy or funny or sad, but we knew of only one who could be all three simultaneously–Shirley MacLaine (Lally 300).

MacLaine did research for her part by spending a day running an elevator in the LA Times building. This was not a glamorous part, supposedly her entire wardrobe for the film cost the amount a real working girl could afford, $178.50.

Fred MacMurray, who Wilder had rescued from bland song and dance roles when he was cast as the heel in Double Indemnity, was the second choice for the role, but Wilder’s first choice, Paul Douglas, died suddenly of a heart attack two weeks before shooting began.  Murray, who had just starred in The Shaggy Dog for Disney, went back to playing a swine one more time before becoming ensconced in the heart warming tv sitcom My Three Sons.  MacMurray told the story of a visit to Disneyland after The Apartment opened and being accosted by an irate woman who had loved The Shaggy Dog, a gentle family film. “I saw The Apartment last night.  How could you? You spoiled the Disney image” she scolded, and conked him with her purse (438 Sikov).

One actor was cast in New York, Ray Walston.  He said of his audition,”I met him (Wilder) at the Warwick Hotel in New York, while he was there doing exteriors.  I was sent over there by my agent, and I went over about 8:30 one night and went into this living room, where he was sitting at a French table that served as a desk.  He said to me, ‘Josh Logan tells me that you are a good actor.’ I nodded and he said, ‘Do you have an overcoat?’ I said, ‘Yes.” He said, ‘Is it an expensive overcoat?’ I said Yes.’ He said, ‘Good.  Then you got the job.’ How can you resist a man like that?” (Sikov 433).

Wilder began filming this quintessential New York story in November, 1959. C. C. Baxter’s apartment is on West 67th Street, and various other locations were scouted, including the Majestic Theater (where Phantom of the Opera now resides) a bar on Columbus Avenue, and the lobby of a shiny new $38 million Wall Street skyscraper. But, the weather was so cold and inhospitable that the entire production was shifted to the studio, and all the real locations were rebuilt in California. The vast office, designed by Alexander Trauner (and for which he won an Oscar) uses forced perspective, with tall extras seated behind regular desks, and then the desks recede in size, to smaller desks with either midgets or children, and finally toy desks with cut out workers.  All this was dressed with $2.5 million of borrowed IBM office equipment.

Many critics felt uneasy at the film’s mix of comedy and drama, finding it too smutty to be funny. Wilder had not gotten so many negative reviews since his cynical newspaper story Ace in the Hole a decade before.  In spite of many iffy reviews, the film was a big box office hit. The Academy Awards begged to differ with many of the film’s critics; the film received nine nominations, including both Lemmon and MacLaine.  The film won for Art Direction and Editing, with Lemmon losing to Burt Lancaster for Elmer Gantry, and MacLaine to Elizabeth Taylor in BUtterfield 8.  But then, Wilder won three Oscars, for writing, directing and The Apartment as Best Picture, becoming only the second person to win three Oscars in one night.  That such a morally ambiguous film could receive the validation of the conservative Academy was because, as Aljean Harmetz wrote in Wilder’s obituary, “He had an inventive talent for making unpleasant situations hilarious, and he had the courage to deal with traditionally taboo subjects.”

The 35mm wide screen print shown at the NC Museum of Art to a sold out house was a huge hit. Audience laughter at the jokes creates a balance to the sadness in a theater, a different experience to watching at home.. Hope Holiday’s comic turn as Jack Lemmon’s drunken Christmas Eve pick-up was particularly appreciated. The number of martinis consumed in the course of the film was impressive (and would seem to induce alcohol poisoning) and the debauched office Christmas party is fortunately a thing of the past. There are so many great New York accents, too, something else that is less common these days, and the Yiddish accents that have already vanished with their speakers.

We begin our Mad Men series with this film, not just because it perfectly evokes the setting of the television series. The heel, Mr. Sheldrake, even has a secretary, like Don Draper at the beginning of the series, named Miss Olsen. The whole ambiance of the film seems to have been a major inspiration, but it is also specifically mentioned in the show.  The men in the office chuckle over how unrealistic the film is: Who ever heard of a girl who could run an elevator? 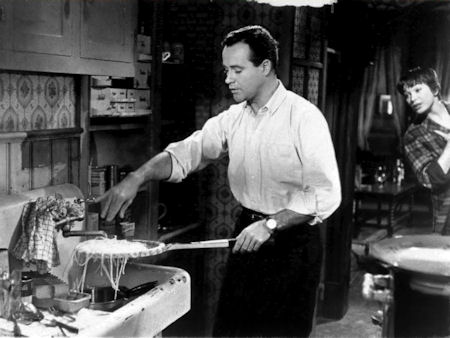