Apu has graduated from college, and he struggles to combine his life as husband and father with his aspirations of a writing career. “Ravishing! Ray make us feel the magic of feathery reeds in the sunlight, the terrible beauty of a monsoon deluge hitting dirty stone streets, the exultation of love, and the inescapability of loss” (John Powers Vogue).

The final film in the Apu trilogy was director Satyajit Ray’s fourth film, his third, The Music Room /Jalsaghar preceded Apu Sansar. Since this film relied less on the two novels by Bibhutibhusan Banerji, Pather Panchali and Aparjito than the previous two films, he was free to use his imagination as to the fate of his characters. Like his other films,”the sights and sounds of railway trains, first heard, then seen, in Pather Panchali—are the woof of the trilogy, drawing it together into an epic work” (Apu Robinson 79).

When Jawaharlal Nehru, India’s Prime Minister, saw Aparajito, he asked Ray, “What happens to Apu, now?” (Apu Robinson 127). At the Venice Film Festival, a reporter asked him the same question, and he began to think about continuing Apu’s story to adulthood. It is a culmination of the story, and of Ray’s artistry, Robin Wood wrote, “surely one of the most moving films ever made” (Apu Robinson 128). He needed new actors yet again. Soumitra Chatterji, who was rejected as the adolescent Apu, because Ray thought he was too old, now played the character as an adult. He identified strongly with Apu, saying “We were to a great extent Apus of our time” (Apu Robinson 78).

Aparna was played by 14 year old Sharmila Tagore, still at school. A dancer, although not yet an actress, she required a lot of coaching to get her through her role. Sharmila made Bengali “art” films, but then became a popular romantic Bollywood star of the 1960s. She married a famous cricketer, who happens also to be royalty, the Nawab of Pautudi, and their oldest son, Saif Ali Khan is himself a big Hindi film star. 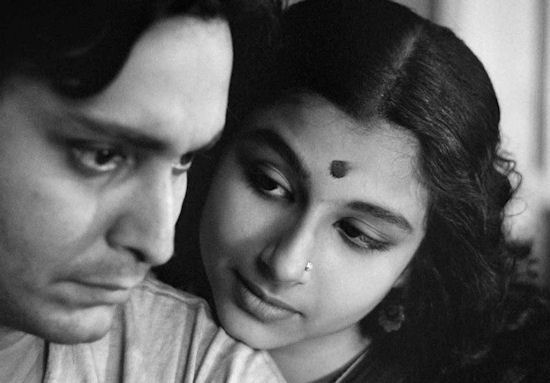 The status of Ray’s films, both in his native India and the West, have been misrepresented to a degree. Ray’s films have always had a small market in India, compared to the big commercial releases, particularly of Hindi language films. The films did have a successful run in Bengal at the time of their release, filling theaters and creating a cultural conversation in and around Calcutta, attracting the attention of the Bengali film industry. But, its depiction of rural poverty was disturbing to many Indian officials and although the West Bengal government produced the films, they hesitated to promote them internationally. There were outspoken critics of the exploitation of poverty, and lack of the appearance of a modern India, by prominent voices such as the Bollywood heroine Nargis, who later became a member of the Indian Parliament.

And, the films were not universally acclaimed by Western critics, in spite of their successes at Cannes and Venice. Pather Panchali was not subtitled when first shown at MoMA, and there was not even an introduction to explain what audiences were about to see. It takes a brave film goer to watch a film in a language they do not understand. The first film did not screen in the UK until late 1957 and in the US until late in 1958. Dilys Powell, writing in the London Sunday Times wrote of Aparajito “So much beauty, yet I had to yawn” although 18 months later she wrote about the film again, how much she had thought about it and how the scenes had haunted her. (Apu Robinson 152) Pather Panchali had won for Best Film and Best Director at the San Francisco Film Festival, and would go on to great acclaim in American theaters.

It’s so interesting to read contemporary accounts of these films, which burst onto the Western art film landscape with so little preparation. Parker Tyler, an early advocate of films in languages other than English said, “Satyajit Ray’s trilogy came from India, whose teeming industry is still so little known to other countries because of its mediocre products” (226 Tyler). Yet, he goes on to praise the films effusively, invoking one of the few Indians widely known to Americans, “To Western audiences, there seems nothing to stand in the way of their being their roles” concluding, “The fact is that Satyajit Ray is one of the most unpretentious of film artists, a leader in the understated meaning of that term; a leader, in fact, such as was his countryman, Mahatma Gandhi” (Tyler 231).

I have stacks of books on Bollywood cinema, none of which even acknowledge Ray’s existence, such is the chasm between popular and art cinema. The 1950s was the heyday of international art house cinema, and the teenaged Martin Scorsese wrote of seeing the trilogy in a New York theater; it ran for a solid 8 months in NYC. “I was totally absorbed as one would be reading a great epic novel. Satyajit Ray’s ability to turn the particular into the universal was a revelation to me. I was 18 or 19 years old and had grown up in a very parochial society of Italian-Americans and yet I was deeply moved by what Ray showed of people so far from my own experience. I was moved by their society and their way of life echoed the same chords in all of us…Ray’s magic, the simple poetry of his images and their emotional impact will always stay with me” (Apu Robinson 158). In Aparajito, Apu’s mother sends her son off to college in Calcutta, and he walks away from her, barely looking back, as her world changes forever, showing an emotional moment all parents have shared, whether or not our child skips happily off to pre-school or leaves for university.

In 1991, with the urging of Martin Scorsese and Ismail Merchant, Ray finally received an honorary Oscar, which he accepted from the hospital bed where he would die only three weeks later.

The audience at the North Carolina Museum of Art had mixed reactions. Some liked this film the best of the three, because there are some light moments, and there is the satisfaction of the story coming full circle. Also, Sharmila Tagore glows in her small role as Aparna. Others felt Apu’s childhood and adolescence were the heart of the story, and Apur Sansar was more of a coda. I leave it to you to watch all three films and decide for yourself.

“The trilogy has the spaciousness and breath of a great novel, and it takes us along on Apu’s journey through life rather than making us mere spectators The Apu Trilogy can, and does, change you. It opens your eyes once again to the wonder and possibilities of the choice that we have, and it reminds us as well of the limitless, untapped potential of the cinema to show us these things” (Wilhelm 421).

“I should be happier with the description ‘timeless.’ Bach is timeless. So is Masaccio. So is Buster Keaton. So are Indian and Egyptian sculpture, the murlas of Ajanta, Chinese painting, Japanese woodcuts, Etruscan vases, Benin bronzes, the horse of Lascauz and the bison of Altamira…” (Ray 87)