Jean Pierre Melville looked back on his own youth in the French Resistance’s clandestine war against the Nazis in this film only recently released in the U.S, undoubtedly, the most highly praised film of 2006. “Bleak and beautiful by turns, that rare work of art that thrills the senses and the mind.”—New York Times.

Jean Pierre Melville is a relatively unknown director, compared to his colleagues in the French New Wave, like François Truffaut or Jean Luc Godard. A major reason is the limited release his films have received in the US. Some, thanks to Rialto Pictures, are being released here for the first time. But, another is his intentional cultivation of mystery around his life, believing it was only his work that mattered. His most famous film is Bob le Flambeur (Bob the Gambler) a paen to American style film noir, if an off kilter one, with its interest in documentary style realism. This cult favorite of many directors and cinefiles was just about the only one of Melville’s films that could be seen in this country.

Melville was born Jean Pierre Grumbach, and modeled his pseudonym after his favorite novelist, Herman Melville, the author of Moby Dick. He took the name, not as a nom de plume, to hide his writing and directing identity, but as a nom du guerre, when he joined the Resistance. His family was Jewish, and his family was close, his parents were first cousins. He was passionate about both watching and making films in his childhood, filming with a camera given to him as a gift by his father when he was 7 years old. By his early 20s he had filmed the equivalent of 30 features in the 9.5mm format, and he collected and projected commercial films in this small gauge, as well. He was drafted into the French Army in 1937, and was still in the military when WW II broke out. His regiment was trapped in Belgium, and evacuated to England. After the Occupation of France, rather than being shipped out to Dunkirk, as he was supposed to, he joined the French Resistance. Later, from England, he joined the Free French forces and participated in the liberation of Italy and of Lyon. Details of his actual service are hazy, as befits the secretive nature of his Resistance work.

He made his first short professional film in 1946, and married in 1952. He would remain married to Florence his entire life, and she was an important behind the scenes influence on his work. Because of his love for Edgar Allan Poe, Jack London, and Herman Melville, all of which he read in English, and Hollywood films of the 1930s, he was fluent in both the language and culture of the US. His passion for movies was constant, and he dressed in an Americanized fashion, with Ray Ban sunglasses and fedoras and Stetson hats.

By the end of the war, he was 30, unable to get a job in the French studios, he formed his own production company, shooting on a shoestring without much of a crew or notable actors. His ingenuity inspired the French New Wave directors, who considered him a “spiritual father” (Lanzoni) even if he did not share their taste for baroque melodramas like Johnny Guitar. They, in turn, did not share his interest in WW II and his love for American crime films of the 1930s. By the early 1960s, he was able to work with bigger budgets and name actors, and even did a bit of acting himself, in Jean Cocteau’s Orpheus and Jean Luc Godard’s Breathless. His uninsured studio burnt down in 1967, a blow to his filmmaking independence./reviewpages/MD_root/reviewpages/MDBreathless/

His personality was prickly, and he argued with virtually all of his collaborators. Lino Ventura, the star of Army of Shadows, was virtually at war with Melville throughout the shooting, and vowed never to work with him again. Melville died in 1973, at the age of 55, of a heart attack while discussing the difficulties he was having with a script for a forthcoming project.

Army of Shadows is considered the most accurate cinematic representation of the French Resistance, drawn as it was from Melville’s own life. Adapted from Joseph Kessel 1943 novel, The Army of Shadows, it depicted the stories of Resistance members, and the brutal choices they had to make for their own survival and their colleagues. Kessel was a WW I hero and the author of the official Resistance anthem, “Le Chant des Partisans,” as well as the erotic Belle du Jour, filmed by Luis Bunuel. The Army of Shadows begins, “There is no propaganda in this book and there is no fiction.” Melville first read the book when it came out, and spent 25 years pursuing his dream of bringing it to the screen. It was released during the quarter century national celebration of the Liberation of Paris. Kessel could not believe his long standing determination to film his book. Melville admitted that there was necessarily a difference in tone between what was written in the heat of the war, and what was filmed in retrospect years later. As autobiography, it avoided clichés, depicting the bravery of individuals doing difficult jobs for which they had no training. If the characters seem cold and austere, a critcism of the French press of the day, it is because of Melville’s commitment to avoid the melodramatic clichés of other war films.

Filmed between Le Samouraï and Le Cercle Rouge, the film is much darker than his earlier films dealing with the war and Resistance, Le Silence de la Mer and Léon Moran, Prêtre. Army of Shadows has clear links to Mellville’s celebrated gangster films. As Ginette Vincendeau points out, “the post war thriller can be read both as oblique representation of the war and as manifestation of its legacy: the emphasis on underground activities and armed struggle, the importance of loyalty and betrayal, the blurred and often corrupt moral universe in which both sides uncannily echo each other.” Melville’s films are the opposite of the fast paced 1930s crime films he loved; here the long, silent shots were intended to engage the imagination of the viewer in the spaces. Kessel wept with emotion when he saw the film. Twenty-two former Resistance fighters were invited to a screening, and praised the accurate reconstruction of their experiences.

The shot of the Germans marching by the Arc de Triomphe was one of the two shots he was most proud of in his career. “ I used the sound of real Germans marching. It’s inimitable. It was a crazy idea to want to shoot this German parade on the Champs-Elysées. Even today I can’t quite believe I did it. No one managed it before me, not even Vincente Minnelli for The Four Horsemen of the Apocalypse, because actors in German uniform had been banned from the Champs-Elysées since the First World War…To do this shot, which may well be the most expensive in the history of French cinema — it cost twenty-five million Old Francs ($50,000) — I was first allowed to rehearse on Avenue d’Iéna. At three o’clock in the morning, with all traffic stopped and the Avenue lit entirely by gas lamps, men in uniform began to march past. It was a fantastic sight. Wagnerian. Unfilmable. I swear to you that I was overwhelmed. Then I was afraid . . . I began to wonder how it would go at six in the morning when I was shooting on the Champs-Elysées.” (Melville interview with Nui Nogueira on Rialto Pictures website).

The opening concentration camp scene was filmed in a reconstructed camp. Melville said that next to it was a unused one, built by the Nazis, ready for inmates. He also wanted to reproduce the privations during the war, when heat was scarce (small enclosures were built in large rooms, and people slept fully clothed) and hunger became a daily preoccupation.

The original cinematographer, Pierre Lhomme, supervised this new restoration by Rialto Pictures, and the photography is remarkable: never was a color film so relentlessly gray. Because it was never released in this country, Rialto promoted it as a new release, and it has landed on many end of the year Ten Best lists, as well as being selected Best Foreign Film of 2006 by the New York Film Critics. Does an Oscar nomination loom in the future? One critic went so far as to say that all the actresses who might land an Academy Award nomination should be grateful that Simone Signoret is dead, and ineligible for competition.

“…any moviegoers with a weakness for dry heroism, dark-toned humor, and storytelling of pantherish pace and grace—in short, lovers of cinema—should reach for their fedoras, turn up the collars of their coats, and sneak to this picture through a mist of rain.”—Anthony Lane, The New Yorker. 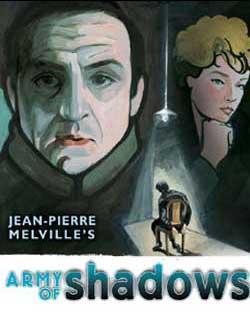 French Cinema: From Its Beginnings to the Present by Rémi Fournier Lanzoni, Jean Pierre Melville by Ginette Vincendeau, Film Encyclopedia by Ephraim Katz, Anthony Lane in The New Yorker, May 8, 2006, Rialto Pictures website.