Pining for Colin Firth’s Mr. Darcy, Jane signs up for some Pride & Prejudice cosplay to jumpstart her romantic fantasies.  This off-kilter rom com is simply delightful. “How much longer before the truth that’s universally acknowledged is that young women and their romantic troubles are lighting up screens in ways that the mope-and-disembowel routine of that Wolverine son of a bitch just can’t?” (Village Voice).

We come, all to soon, to the end of my series on Costume and Character in the Movies. Viewing costume on film has two aspects. First, you say, “look how wonderful Errol Flynn looks as Robin Hood in his leather jerkin, and “doesn’t Greta Garbo look great in her fur-trimmed, ombre coat?” And then you say, I WANT a fur-trimmed ombre coat.

Modern clothes are boring.  There was a cartoon in the New Yorker a few years ago, in which someone is saying, “I thought in the future we would all be wearing identical outfits” (thinking of the sleek stretchy unisex jumpsuits of so much filmic sci fi or the uniforms of Star Trek) and the people in the cartoon frame are all wearing monotonous jeans and tee shirts.  I suspect this is why popular culture has become obsessed with cosplay.  Dressing up as somebody else and enacting a fantasy can take many forms.  I was rather surprised to discover that there are not just Civil War and Revolutionary War reenactments, but World War II and Viet Nam War events as well.  Comic Con, where not just comic books, but science fiction and fantasy themed movies are enjoyed has become a major Hollywood marketing event.  Elaborate costumes are part of the fun, as they are at all kinds of conventions, from video game convocations to gatherings of the devotees of My Little Pony.  Steampunks, who celebrate the future as envisioned by Jules Verne, have picnics on the NCMA lawn.  Moviediva, jr., has been to the Jazz Age Lawn Party, dressed a 1930s belle, and her ex-roommate LARPs, going on role playing camping trips dressed as a elf.  There is a culture of vintage dance enthusiasts, for whom proper period attire is de rigeur. It’s not unusual for hosts to plan events, even weddings, in the spirit of Downton Abbey. Austenland focuses this yearning for fancy dress fantasy placed in the universe of the novels of 19th century author Jane Austen. 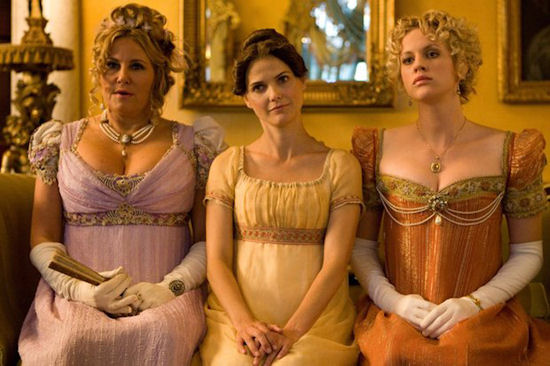 The novels of Jane Austen have been revered since their publication, her writings appeared in the late 1790s through her death in 1817.  Literary scholars and enthusiasts of Jane Austen were first called Janeites by George Saintsbury in his 1894 introduction to a new edition of Pride and Prejudice, and Janeites were the men who shared a literary enthusiasm for her novels.  But by the 1930s and 40s, the term began to be used in a dismissive way, like Trekkies is used to dismiss the superfans of a particular television show.  As Adrianne Wadewitz pointed out in her Wikipedia entry, and recounted in her NY Times obituary, “Janeites deserved credit for codifying contemporary fandom” meaning without Janeites, there would be no Trekkies, no Marshmallows, no Whovians, no Potterheads, no Twihards, no Browncoats, no Bronies, no Cumberbitches.

Janeites have book clubs (and a novel called The Jane Austen Book Club) teas, games, readings, plays, costumed events, and trips to the locations mentioned in Austen’s novels.  There are a flood of Austen related riffs, like Pride and Prejudice and Zombies, Death Comes to Pemberly, Briget Jones’ Diary: the list is long.

Shannon Hale’s Austenland crystallizes Janeite longings with a particular focus, the BBC miniseries version of Pride and Prejudice, which stars Colin Firth as Mr. Darcy and Winston Salem North Carolina’s Jennifer Ehle as Elizabeth Bennett.  There have been versions of this novel before and since, but somehow Colin Firth changed everything.  Hale discovered the miniseries hoping that it would help her younger brother, who had to read the book for school, visualize a world completely alien to him. She watched it once.  She watched it again, and it became a secret passion, one that she discovered she shared with her friends.  She was in an MFA writing program at the University of Montana, and as she began to formulate her story, about vacationing in a Regency era theme park, she realized it would be heartily poo-pooed in her literary writing program.  It eventually took her six years to complete.

The film screenplay was an 18-month collaboration between Hale and Jerusha Hess, who co-wrote Napoleon Dynamite, and is a much closer adaptation of the book than is usual.  Kerri Russell channels the awkward enthusiasm of Jane Hayes for her vacation of a lifetime, and J. J. Fields, who looks alarmingly like Tom Hiddleston, plays Mr. Nobley.

“The room had begun to seem unnaturally crowded, the lamps too bright but the light they make too dim.  Jane caught a glimpse of herself in a mirror, propped up in that ridiculous dress, gawky and silly, a clump of brown bun and curls pinned to her head.  Just the sight was enough to tip her back again.  ‘What a crackpot,’ she whispered to herself.  In all the years Jane had fantasized about an Austenland, she never considered how, once inside its borders, she would feel like an outsider.” 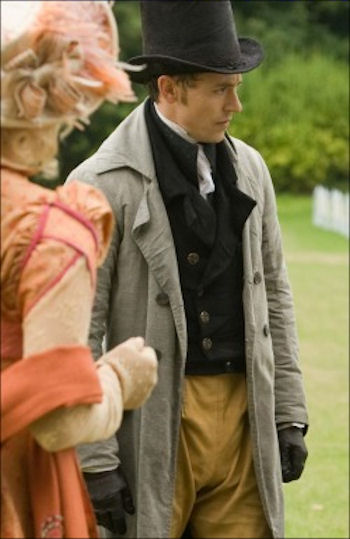 Hilariously, Mr. Nobley wears a coat Colin Firth wore as Mr. Darcy. Thanks to the invaluable www.recycledmoviecostumes.com for this amazing fact.

The film was acclaimed in sold out screenings at the 2013 Sundance Film Festival and was released in theaters later that summer.  It came and it went in record speed, because film reviewers, the fraternity almost entirely male, just didn’t get it.  They thought Austenland was about hiring a surrogate Mr. Darcy to be your gigolo.  Or, as Roger Moore for McClatchy said, “It’s never more than a theme park that isn’t worth the price of admission.”  The amount of vitriol aimed by the reviewers at this film is rather incredible.  Why did they hate it so much?  I agree that Jennifer Coolidge is allowed a bit more leeway in her comic character than perhaps is necessary (although the audience thought she was a scream).  But, enough with Spiderman’s angst and Batman’s brooding over and over again. Aren’t girls allowed their on-screen fantasies, too?

The audience at the North Carolina Museum of Art would seem to agree. Uproarious laughter was heard throughout the movie, and everyone applauded and stayed through the ending credits postscripts. Afterwards, people stopped to thank me for showing a recent film they had never heard of, but thoroughly enjoyed.