Director Harry Dawes (Bogart) discovers the lusciously beautiful Maria Vargas (Gardner) flamencoing in a Spanish dive. A controlling producer (supposedly based on Howard Hughes) wishes to lure her both to Hollywood and his bed. Edmond O’Brien’s toadying press agent creates in her “a hot flame that burns from the screen” yet all Maria craves is “a man you can look at in the daytime.” Francois Truffaut wrote, “A subtle and intelligent film, beautifully directed and acted, it is the best thing around right now.” Ava herself wryly called it, “the apogee of my life as a so-called star.”

Many have assumed the character of Maria Vargas was based on Gardner’s life, although writer-director Joseph L. Mankiewicz said he was inspired by Rita Hayworth; her life as a dancer and her marriage to the international playboy Aly Kahn. Gardner, too, journeyed from a modest background to international stardom. Born in the farming community of Grabtown, about an hour outside of Raleigh in Johnson County, NC, she had no ambition to be an actress, but was discovered when her brother-in-law placed her photo in the window of his New York photography studio. She left North Carolina with an MGM studio contract in August, 1941, when she was 18 years old. By January 10, 1942, she was married to Mickey Rooney, one of the biggest stars of the day, and began to experience the roller coaster ups and downs of a Hollywood career and a celebrity lifestyle. 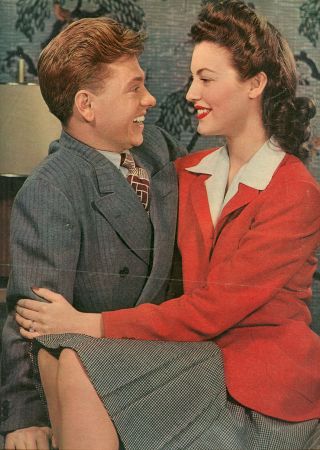 When she arrived in Rome to film Contessa, she had just left her third husband, Frank Sinatra, by all accounts the great love of her life. Her relationship with Bogart was strained on the set, because Bogart was a friend of Sinatra’s, and Bogart disapproved of her affair with bullfighter Luis Miguel Dominguin. This romance must have been an elemental one, since Dominguin did not speak English, nor Ava, Spanish!

Gardner loved Europe, and felt alienated from Hollywood. Soon, she would buy a house in Spain (a place that reminded her of her North Carolina home) and live far from the movie business the rest of her life. She thought Bogart horribly provincial because he “hated Italy and lived on ham and eggs and steak whenever he could.” He didn’t think much of her acting ability; she wrote, “he certainly knew a lot more acting tricks than I did, and didn’t hesitate to use them. I have to admit he probably forced me into a better performance than I could have managed without him.” Sometimes, he gave her the wrong line just to freshen her performance, which he also did when acting in films with his wife, Lauren Bacall. Whatever friction occurred on the set between Gardner and Bogart is not evident in the film, which truly comes alive in the scenes they share. 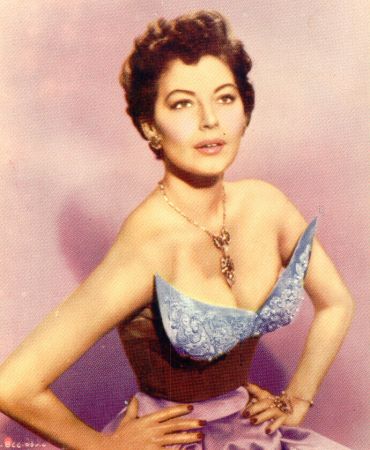 Mankiewicz, who won writing and directing Oscars two years in a row for A Letter to Three Wives (1949) and All About Eve (1950) was the last great director in Bogart’s career. Bogart would make only four more films, and he was already wracked by the coughing spasms that heralded his fatal cancer. Edmond O’Brien, a greatly under-rated actor who won an Oscar for his role in Contessa said, “many takes were printed simply for the lines Mankiewicz could get between the coughs.” Mankiewicz said, “Bogie wanted you to be afraid of him a little. He made perfectly sure that you knew he was going to be an unpredictable man. I caught on to that and I played my own little game of keeping him off balance by never giving him his opportunity. You forstall it by kidding him out of it.” But, he also said of him, “Bogie was the iconoclast in a society that dealt in icons, which is Hollywood. The cynicism that the part required was his by nature. When you’ve been through the Hollywood mill, you’ve been through the mill of mills.”

Writer-director Joseph L. Mankiewicz was a precocious student, graduating from high school at 15 (including a year off at 12 for study in Berlin). At 13 he started writing for the school newspaper. In 1923 he had to opportunity of interviewing one of his theatrical idols, W.C. Fields. “Little did he know at age 14 he would interview the man for whom he would eventually write the phrase, ‘my little chickadee.'” (Lower). He entered Columbia in premedical studies, but ran afoul of the science requirements for a degree in Psychiatry. The films he wrote were deeply concerned with motivation, not plot. Mankiewicz came to Hollywood with the talkies, lured by his older brother Herman’s promises of easy money. His first job was as a title writer for sound films playing in towns where the theaters had not yet been converted to sound. He then graduated to screenwriter, and later producer, where he was being groomed by MGM head Louis B. Mayer to succeed Irving Thalberg. This was the most frustrating period in his career. Thalberg considered the producer’s job creative, but Mankiewicz had other goals. 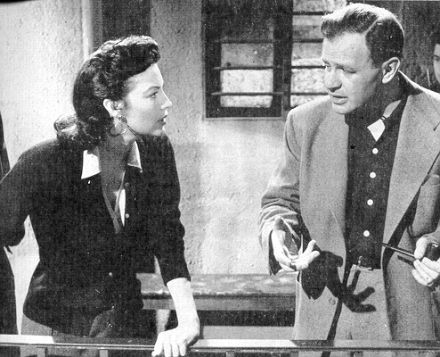 In The Barefoot Contessa, Maria Vargas escapes from her empty Hollywood life by running off with a European playboy. This gave Mankiewicz a chance to vent his disdain of the International Jet Set. He said, “the jet setters essentially fulfill their own dreams and not other people’s. They themselves take their own lives very seriously. They really are the rich scum of the earth, and I detest them.” (No waffling here). Critics thought the film was far too cynical, but Mankiewicz made many compromises. His original story had Maria find her husband in bed with the chauffeur, and indeed, a modern eye will discern the remaining wisps of that storyline.

Kirk Andrews is played by character actor Warren Stevens (an actor who was a “special guest villain” on seemingly every 1960s tv show). Andrews was modeled on Howard Hughes, originally much more so. Hughes was a little touchy about some of the dialogue that seemed to skewer him rather too closely (he was known for his sexual interest in the protegées he put under personal contract, and his obsessive wish to control their every movement afterwards) so “a Texas tycoon” was changed to “a Wall Street lion.” O’Brien’s perspiring press flack was based on two of Hughes’ real-life flunkies. The actor was convinced that it was the telephone scene that got him the Oscar for Best Supporting Actor. Two performers to note in bit parts are busboy Enzo Staiola, who was the heartbreaking little boy in The Bicycle Thief, and silent film actress Bessie Love, one of the older jet-setters in the casino.

The flamenco scene was one of Gardner’s favorites from her career. “Not only was I getting more and more intoxicated by the romantic rhythms of flamenco, but this was the first time I’d ever danced in a film, so I practiced every night on those cold Roman floors for three full weeks. We shot the scene in an olive grove in Tivoli, outside Rome, with 100 gypsies beating time to a phonograph record. When the phonograph broke, they kept right on beating and that was the take we used.” She seemed to understand her character, saying “the only place she feels safe looking for love is back in the gutter where she came from.” But she hated the way the film was promoted, “That damn advertising line, ‘The World’s Most Beautiful Animal’ will probably follow me around until the end of time.” 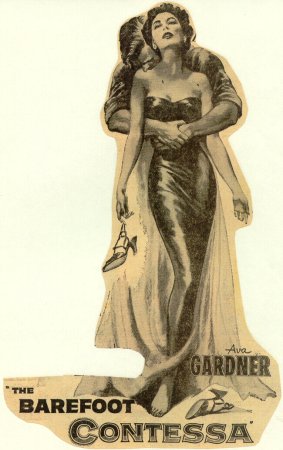 (Note: Bogart’s name has been cut out and thrown away by this collector) 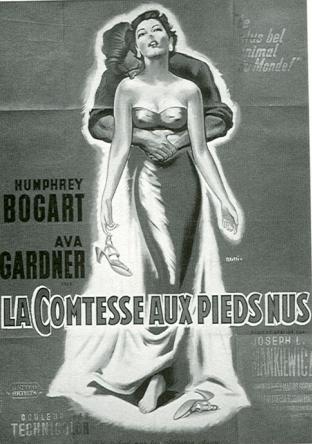 François Truffaut was not the only member of the French New Wave who loved this film. Future Director Claude Chabrol wrote, “…the film’s principal character, perfectly embodied by the beautiful Ava. Frigid with the libertines, a nymphomaniac with the puritans, she is everything the audience isn’t. She is, most importantly, the woman they’ll never possess themselves…This Beauty, turned into a barefoot statue, will evade them. In the end, she belongs to no one, except perhaps the man who is willing to protect her without wanting to posssess her: Mankiewicz, in the guise of Bogart’s chiseled features.” (Doucet).

Gardner is exquisitely lovely and beautifully gowned by the Italian couturier sisters Fontana. There is one particularly stunning strapless pinkish lavender satin gown, beaded in black and white, and a bolero jacket with long trailing sleeves. Shades of lavender and purple envelope her during the stardom phase of Maria’s career. Gardner understood (as well she might) the burden of embodying other people’s sexual fantasies. One recalls Rita Hayworth’s lament, “They go to bed with Rita Hayworth, and they wake up with me.” In Hollywood Costume, the authors summed up, “Sensual, husky voiced, her eyes betraying the untroubled surface of her image, Ava Gardner somehow eluded the strictures of the studio system and invented her own kind of glamourOf all the stars produced by the studio system, Gardner seemed the least reverent, the most sorry about the exploitation. When MGM delivered one of its many bum deals to her, she said, ‘That’s Metro; they louse you up every time.’ With her ravaged image, her world-weariness, and her disregard for publicity, Ava Gardner represented a decisive break with the old idea of the Hollywood star.” 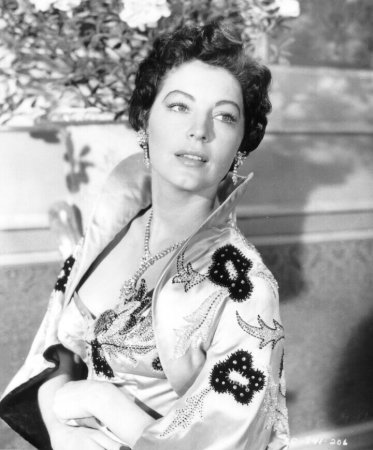 The screening at the North Carolina Museum of Art, on the 61st anniversary of Ava’s marriage to Mickey Rooney, was a sold-out sensation. The Ava Gardner Museum of Smithfield, NC, brought a beautiful embroidered cape that Ava wore in publicity photos for the film, as well as a pair of shoes from The Barefoot Contessa and other memorabilia. Billie Stevens, Director of the Ava Gardner Museum, helped welcome the enthusiastic crowd and said a few words before the screening. Meeting Mary Edna Grantham, Ava’s niece, was a special pleasure. We spoke about how there was never a hint of North Carolina in Ava’s speech; Ms. Grantham said even when she returned home she never lapsed back into her Southern accent–the MGM speech coach’s job was thorough. A restored Technicolor print from the UCLA Film Archive was gorgeous; and the audience gasped at Ava’s first stunning close-up. Once again, the experience of being in a crowded theater, where the audience hangs on every image and every word, makes the theater experience magical, and completely different from watching home video.

Gardner’s interpretation of desire’s elusivness in The Barefoot Contessa dovetails with Mankiewicz’s personal meditation on movie fame. Maria is first a reluctant beneficiary, and then a tragic victim of male vanity. Francois Truffaut, writing as a young film critic, loved this film, “It is a daring, novel and most satisfying venture, and Mankiewicz uses it to settle scores with the Hollywood which condemned him to polishing furniture when he had dreamed of breaking down walls.” 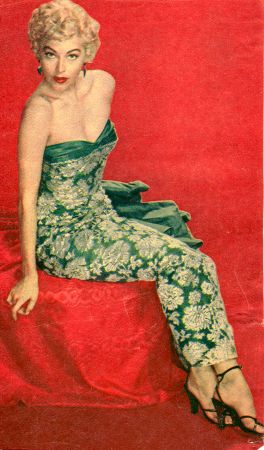 Why did this photographer make her pose in a blonde wig?

(Photo of Gardner and Rooney from anonymous movie star scrapbook, blonde Gardner from 1952 scrapbook, Gardner and Mankiewicz from Films in Review, October, 1954–other films reviewed in this issue include Rear Window and Brigadoon. Imagine! All other photos courtesy of the Ava Gardner Museum in Smithfield, NC. Sources include: Pictures Will Talk by Kenneth Giest, Ava: My Story by Ava Gardner, Grabtown Girl by Doris Rollins Cannon, Bogart: A Life in Hollywood by Jeffrey Myers, The Films in My Life by Francois Truffaut, French New Wave by Jean Douchet, Joseph L. Mankiewicz by Cheryl Bray Lower and R. Barton Palmer, Hollywood Costume, Glamour Glitter Romance, Dale McConathy and Diana Vreeland, https://fashion-history.lovetoknow.com/fashion-clothing-industry/fashion-designers/fontana-sisters