The uglier we grow with age, the more beautiful our work must become, reflecting us like a child that takes after its parents. –Jean Cocteau

Beauty and the Beast was written in 1756 by Mme. Leprince de Beaumont. She deftly streamlined a slightly older allegorical tale written to amuse the French court into a story intended as a moral lesson for 15-18 year old girls. As with all such fables, it can be interpreted on many levels. Bruno Bettelheim, in The Uses of Enchantment, classified it with the cycle of “animal bridegroom” stories, like The Frog Prince, in which a young girl must exchange the secure love and protection of her father for an uncertain future with a husband. Or, as Cocteau wrote, “My goal was to make the Beast so human, so likeable, so superior to man that his transformation into Prince Charming would be for Belle, a terrible disappointment, and would oblige her to accept a marriage of reason.” Greta Garbo attended a screening of the film and reportedly cried out, “Give me back my beast!” after the transformation (Paris). The tale can appeal to young or old, and the many variations, including Grimm, Andrew Lang or Disney, can be considered either constructive–or destructive. One interesting aspect of the original; the Beast is not merely ugly but simple minded, proving kindness in a husband is more important than being either handsome OR clever. 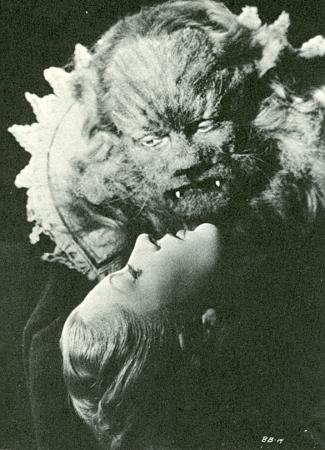 Jean Cocteau was a Renaissance man of mid-20th century arts and letters. He was a Surrealist, a poet, playwright, novelist, artist, designer and filmmaker. Although other Surrealists made short, experimental films, he was the primary director who brought the Surrealist aesthetic to feature length narrative movies. His mysterious, dreamlike films, including Le Sang d’un Poet, Orphée and Le Testament d’Orphée could never be mistaken for the work of another director.

The young actor Jean Marais became Cocteau’s partner and muse in 1937, and it was he who suggested filming Beauty and the Beast. Marais recalled the evolution of the Beast in his autobiography, “For my mask we went to Pontet, an elderly gentleman, a real genius, one of those men who make you realize that one can be passionately in love with one’s work, whatever it might be. He devoted a great deal of thought to how the mask could be given the look of my own face, and not interfere with its mobility. He made a cast and worked on it endlessly. I often went to see him with Moulouk and the dog taught us things: the uneveness and shagginess and spottiness of the fur that made it seem so alive are due to Moulouk. M. Pontet made my mask like a wig, hair on a webbing base, but in three parts–one down to the eyes, a second as far as the upper lip and the third to the base of the neckit took me five hours to make up—that meant 13 hours a day at the studio. Because of the fangs attached to my teeth, all I could eat was mush, and that by the spoonful. Between takes, I scarcely dared open my mouth lest the makeup become unglued; no one understood what I said, and that exasperated me.” “In my opinion,” wrote Cocteau, “one must have Marais’ passion for his work and devotion to his dog to persevere as he did in deserting the human race for the animal race.” 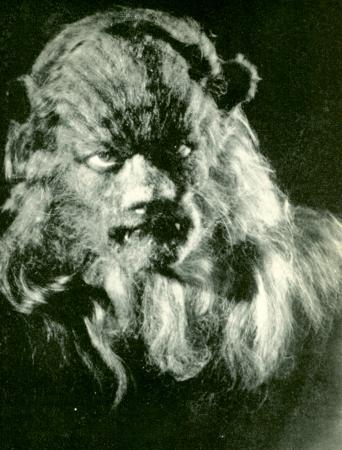 Cocteau collaborated with designer Christian Bérard on the sumptuous look of the film, with tableaux echoing the work of Gustave Dore, Vermeer and Le Nain. Bérard was another brilliantly talented artist who brought his skills to many different disciplines, a painter who designed clothes, décors and theater and ballet productions. Although his name was not on many of his creations, he was a hugely influential figure in the creative endeavors of his time. Cecil Beaton wrote admiringly of his many talents in one of my all time favorite books, The Glass of Fashion. 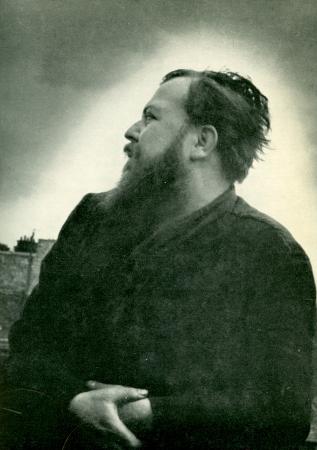 Cocteau wrote in his Diary of a Film, “Watching Christian Bérard at work is an extraordinary sight. At (couture house)Paquin’s, surrounded by tulle and ostrich feathers, smeared with charcoal, covered with perspiration and spots, his beard on fire, his shirt hanging out, he gives to luxury a profound significance. Between his small ink stained hands, the costumes cease to be mere props and take on the arrogant actuality of fashion. He makes us realize that a period dress is not merely a costume, but a fashion which belonged to a period and changed with it. People dressed by Bérard look as though they lived at a place, in a definite period, and not as though they were going to a fancy dress ball.

“By a miracle, he has succeeded in merging the style of Vermeer with that of the illustrations of Gustave Doré, to Perrault’s stories which are in the big book with the red and gold cover.

“What impressed me in these big dressmaking houses, is the love, care and grace with which the women work. Three or four old women, who used to embroider theater costumes for Gaby Deslys and Ida Rubinstein have a real genius which will die with them.”

Cocteau occasionally bemoaned that the film was not in color. “The arrival of Beauty at the wash-house, wearing her grand sky-blue dress, surrounded by black chickens, was an absolute miracle.” 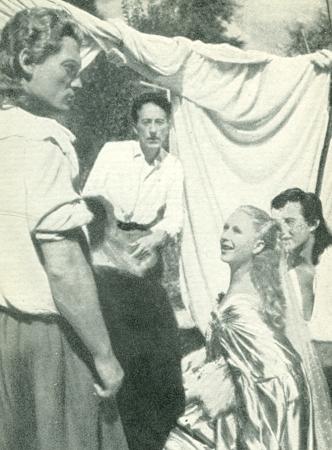 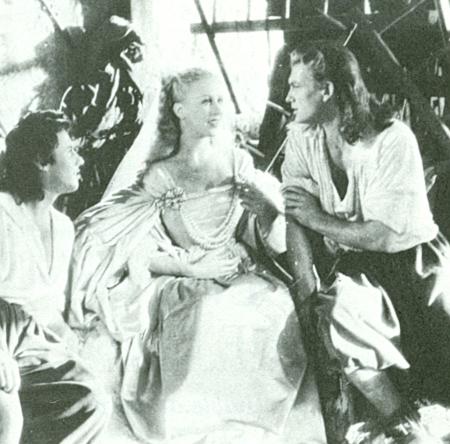 Bérard’s fantastical effects and lavish costumes were enriched by the photography of Henri Alekan, giving, “the soft gleam of hand-polished old silver.” After WWII, everything was in short supply and even collecting 12 white bed sheets without patches for the laundry scene was a struggle. The electricity was aggravatingly intermittent. Old cameras and lenses were unreliable and film stock was inconsistent, although Cocteau and Alekan exploited the older film stock by using it for the scenes where the background was intentionally dark, creating an air of mystery. There was small choice of fabrics and material for costumes and sets. Both Cocteau and Marais were plagued with painful and debilitating ailments. Yet, Cocteau felt the project enchanted, “I wonder whether these days of hard work aren’t the most delicious of my life. Full of friendship, affectionate disagreement, laughter, profiting from every moment.”

When the film was originally released, it was greatly criticized for a shocking emphasis on a subject as trivial as a fairy tale, but Cocteau viewed it as a postwar spiritual renewal. “The movie screen is the true mirror, reflecting the flesh and blood of my dreams.” In his diary, he wrote, “…it was necessary for a poet to try and tell a story through the medium of the camera. It had to be done once. I’m well aware that people think I am wasting my time, exhausting myself like this over a film. They are quite wrong.” 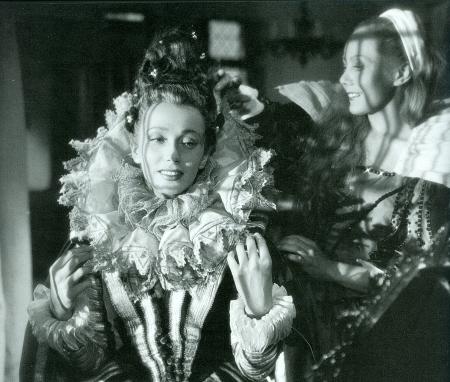 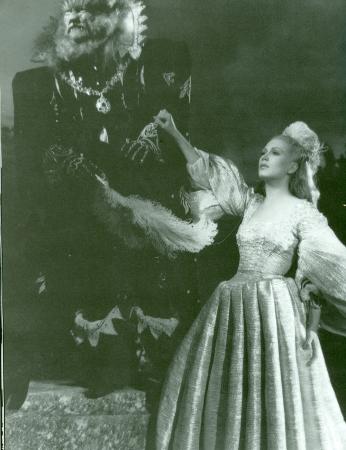 Two illustrations from a museum catalogue, Les Plus Belles Robes du Cinema, from the collection of the Cinematheque Française.

Those children familiar with Disney’s Beauty and the Beast (which possesses its own charms) will find Cocteau’s version relatively easy to follow, even with the subtitles. They will also notice that Disney animators were greatly influenced by Cocteau’s poetic imagery. Janus Films beautiful new print includes retranslated subtitles, an opening credit sequence with Cocteau himself writing the titles on a chalkboard, and restoration of the richly layered photography, so that every detail, even the shimmer in the mane of the horse Magnifique, can be seen and appreciated. La Belle et la Bête has an intoxicatingly dreamlike atmosphere unlike any other cinematic fairy tale. Cocteau aspired to “the realism of the unreal” and wanted his enchanting film “not to be admired, but to be believed.” 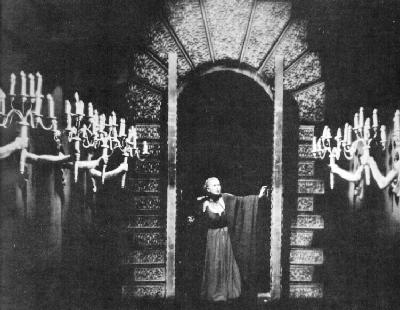 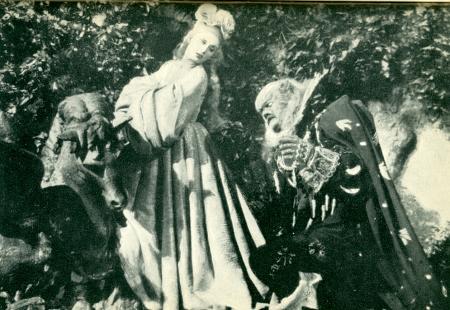 The classic fairy tale atmosphere is revealed in this posed photo.

(First portrait, and Belle in the corridor from a Janus Films catalogue from the 1970s, Beast, Bérard, Cocteau and last photo from Diary of a Film (La Belle et la Bête) by Jean Cocteau, translated by Ronald Duncan. Sky blue gown photo from The Great French Films by James Reid Paris. Apologies for the lack of proper footnoting in this earlier version of this piece. Cocteau’s own writings were consulted, as well as the excellent biography of Cocteau by Francis Steegmüller).