Gillian Holyrod is a witch. She is also smart, sensual and independent. Must she give up her magic if a 1950s happy ending is to prevail? The source for Bewitched and its ilk, Lemmon plays a beatnik warlock in collusion with genius comedian Kovacs. The setting is an exquisite 1950s fantasy Manhattan, with midcentury modern decor, Russell Wright china, tribal art, and Kim in gorgeous black, red and leopard print clothes. “Bell, Book and Candle is an intensely pleasurable film to watch, every image is rich and gorgeous.” (Diana Rico).

Are there movies you want to live inside of?  Bell Book and Candle is one of mine. I love Kim Novak’s apartment, her clothes, and her cat.  The unique color design is courtesy of Life magazine photographer, Eliot Elisofon, who was brought in as a color consultant to cinematographer James Wong Howe.  They created a suitably magical atmosphere.

“Kim Novak’s nova was born of Harry Cohn’s pique.” (Marjorie Rosen) Cohen was furious when his protegee Rita Hayworth married without his permission, and that he’d failed to appreciate Marilyn Monroe’s potential and she had signed with 20th Century Fox. Marilyn Novak had done some modeling (including as Miss Deep Freeze) and Columbia’s star-making machinery went into full gear on her behalf, changing her name (although she declined to be known as Kit Marlowe) tinting her hair lavender and photographing her in her lavender colored pad. Cohen cast her interestingly, including as the lead in the film version of the popular play Picnic, co-starring a hunky William Holden. 1958 was her big year. She had just been lent to Hitchcock for Vertigo and garnered the best reviews of her career in a film many list makers consider among the greatest ever made. Bell, Book and Candle was another success. Cohn died in the middle of this, her 12th film, and for all intents and purposes, her star career ended. Critics never really embraced her, her acting range was somewhat limited, and she was ambivalent about her manufactured sex symbol image. She always seemed rather a sad beauty. Novak was often criticized as having a somnambulistic style, but it serves her well here, as if she were answering a call from another dimension. B B & C director Richard Quine directed a number of Kim Novak’s films and had a long-term relationship with her, although they never married. And the cast of this film resented his attention to her on set.  As for James Stewart, at 50, this was his last romantic leading role.  He was exactly twice the age of Novak, who was 25.

James Stewart had not wanted to do the film.  He was disappointed that he had been passed over for Hitchcock’s North by Northwest. It certainly wasn’t a strong part for him, as a stuffy, uptight publisher.  His career was in a box office slump, and he did not get good reviews. And is does seem much too old for Novak.

The supporting actors have much flashier roles than the leading man.  “Jack Lemmon was born not so much with a silver spoon in his mouth, as with a golden doughnut clenched in his fist.” His cosseted Boston childhood was due to his father’s Vice-Presidency of the Doughnut Corporation of America. John Lemmon, senior, was credited with introducing the doughnut to Britain, as well as the previous advertising successes of having invented Mr. Peanut for Planters’ and the little tin Bayer aspirin box. His mother, on the other hand, was flighty, having delayed a trip to the hospital for little Jack’s birth on account of a good hand at bridge. He was born in the hospital elevator, so alarming his mother that she vowed to have no more children. She spent so much time at the Ritz Carleton bar in Boston that she wished after her death to have her ashes displayed among the liquor bottles; the hotel politely declined. Lemmon’s father traveled on business, his mother drank, and Jack dutifully went to Phillips-Andover Academy and Harvard, taught himself to play the piano, ran track and dreamed of being an actor.

Commissioned an Ensign in the Navy towards the end of WWII, his indifferent military career was useful mainly for the experience that allowed him to play Ensign Pulver in Mr. Roberts so well he won his first Academy Award in 1956. After the war, Manhattan called, and Lemmon spent several broke and hungry years trying to survive on his piano and his acting. TV soap operas led to live dramas, which led to the lead in Room Service on Broadway, where he caught the eye of Columbia Pictures’ despotic mogul, Harry Cohn. Lemmon had extraordinary luck with his first film, It Should Happen to You. He was the male lead, as comedienne Judy Holliday’s disapproving boyfriend. He was directed by George Cukor, and the script was by Garson Kanin and Ruth Gordon, who had written many of the Tracy-Hepburn films. Cohn tried to convince him to change his name to John Lennon, but was satisfied when Lemmon and the film were hits. The year after BB&C, Billy Wilder would star him in Some Like It Hot and The Apartment and he would no longer be merely “comedian Jack Lemmon.” 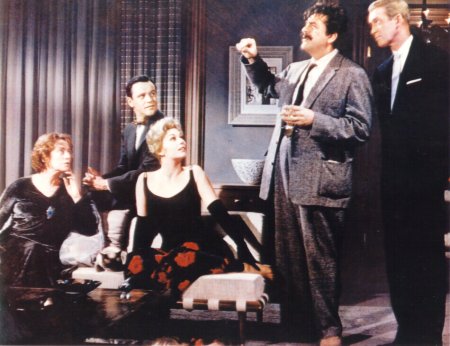 Ernie Kovacs, the iconoclast who transformed television comedy, plays the rumpled and boozy author Sidney Redlitch. This was his 2nd of 10 films; in his first three he co-starred with Jack Lemmon and was directed by Richard Quine. To play against his disheveled appearance, Kovacks gave Redlitch a softspoken tone, and was given “pretty free rein” to create his character. Quine said, Kovacs was “an intuitive actor. He was an extremely sensitive man, and everything I ever worked on with him he required very little direction. He was always quick to find that extra little shtick.” For his entrance, Quine told him, “When the secretary tells you to go in, just walk in talking. Start before you get through the door, no hellos, nothing, just start talking. And he grabbed it like a hungry trout. Stewart looked so astonished at this absurd entrance, it cracked him up.” 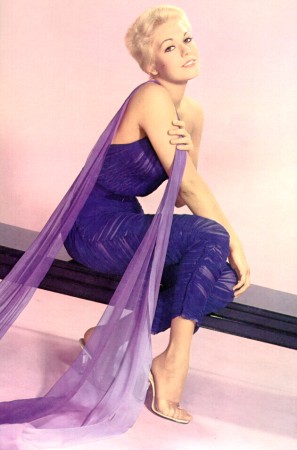 Lemmon said, “My relationship with Ernie, personally and professionally, will always remain very dear to my heart.” Director Quine believed, “If Ernie had lived, the Lemmon-(Walter) Matthau team might well have been Lemmon-Kovacs. They remind me of a sophisticated Laurel and Hardy.” Kovacs, of course, died in a tragic auto accident when he lost control of his fatally engineered Corvair and crashed. (Ralph Nader’s book, Unsafe at Any Speed, was written as an indictment against Chevrolet’s lax safety practices, of which Kovacs was the most famous victim). Lemmon hosted the 10-episode, The Best of Ernie Kovacs and appeared on Ernie Kovacs, TV’s Original Genius. He revealed on the latter that he had occasionally donned a gorilla suit as one of Kovacs’ Nairobi Trio.

John Van Druten wrote Bell, Book and Candle. It ran for almost a year on Broadway, starring Rex Harrison and Lili Palmer and directed by its author. It closed only because he could not find a satisfactory substitute cast. Here, Gillian Holyrod is not just a witch, but a dealer in “primitive” art and with her black clothes, bare feet and hipster brother is clearly a beatnik, a threat to the 1950s status quo. Feminist scholars note she must trade in her chic Jean Louis wardrobe for a dumpy shirtwaist and jam her bare feet into spike heels to be worthy of love. As we learned from the tv show Bewitched, you just can’t be a wife AND a witch. 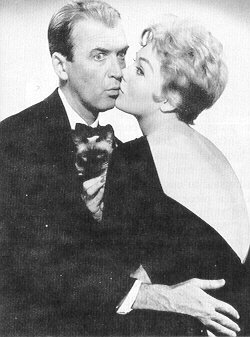 Yet, there is another interpretation. John Van Druten was gay, most famous for his play I Am a Camera, which became Cabaret. But, in Open Secret, David Ehrenstein notes that Bell, Book and Candle is his gayest work. “No one with any degree of familiarity with post WWII Greenwich Village will have any trouble seeing the “witches” and “warlocks” of this romantic fantasy for the gays and lesbians they really are, even in the midst of a purely heterosexual main plot.” So, there are three ways of watching this glamorous product of the twilight of the Hollywood studio era. Uncritically, enjoying the superb comic performances and exquisite production design, as a pre-feminist cautionary tale, or with an intriguing subtext the author slipped magically through the Hollywood Production Code. 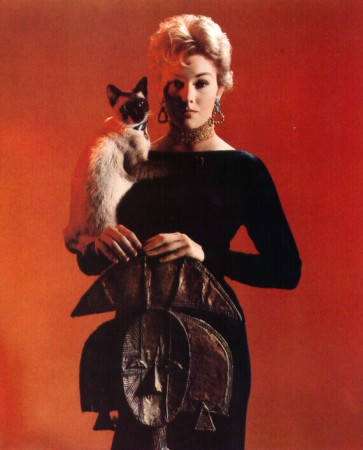 (Sources include, The Other Fifties: Interrogating Midcentury American Icons “The Prime of Miss Kim Novak: Struggling over the feminine in the star image” by Jackie Byars, Kovacsland by Diana Rico, Jack Lemmon by Michael Freedland, Popcorn Venus by Marjorie Rosen, “Kim Novak” by James Robert Haspiel in the February 1978 Films in Review, “Jack Lemmon II” by Michael Buckley in January, 1985 Films in Review, Open Secret by David Ehrenstein. Production still from Jerry Ohlinger’s Movie Materials Store, character portrait from the Kim Novak FIR article, Novak’s glamour pose from A World of Movies (1974) by Richard Lawson and Kim and Pyewacket pose by Robert Coburn, in the 1987 LA Museum of Art exhibit and book Masters of Starlight: Photographers in Hollywood. The November 24, 1958 cover story in Life magazine was on Bell Book and Candle), James Stewart:  A Biography by Donald Dewey.