Three returning veterans–a bombardier, a sergeant and a sailor–meet on their way home after the end of WWII. They are eager to return home, but know it will be difficult to resume their former lives. Unlike the treacly flag-waving that characterized so many war-time films, The Best Years… frankly shows the combat veterans wounded in their souls as well as their bodies. By refusing to be blindly optimistic about post-war America, “The Best Years…is a powerfully felt, deeply moving examination of the human condition” (Michael A. Anderegg).

In 1944, independent producer Samuel Goldwyn’s wife read a Time magazine article on the difficulties faced by returning veterans and suggested this timely topic to her husband as a film subject. MacKinlay Kantor, a novelist and war correspondent, was commissioned to write a screenplay, but instead wrote Glory for Me, a novel written in blank verse. Robert Sherwood, a Pulitzer Prize winning playwright, had been the head of the Office of War Information, and Goldwyn asked him to adapt Kantor’s novel for the screen.

The Best Years… begins with a cross-country flight home. Screen time is spent not only establishing the bond between the home town soldiers from the fictional Boone City, but in showing the view from an airplane, an experience that few civilians, but many in the military, had experienced by 1946. The protagonists are from different branches of the service and different social classes, and they had never met before. But, their soldiering provides a common bond, more real at that moment than the families to whom they return. Home and the meaning of home have changed since the three men, Frederic March, playing a middle aged sergeant, Dana Andrews as a bombardier and Harold Russell as a sailor, left for their military service. The sequence also implies the class mobility many in the service experienced. A soda jerk has become a decorated war hero, while a bank executive finds himself characteristically lower in the hierarchy. There is also the hint of another kind of transformation, as African American servicemen appear in the early scenes attempting to return to their homes. The armed forces in WWII were segregated, but the black servicemen’s empowering experiences defending their country would help inspire the post-war Civil Rights movement.

The most visible manifestation of change in their lives is Russell’s portrayal of the returning sailor. A real-life disabled veteran, who lost his hands in a training accident, he plays a man who lost his hands in combat. His physical loss represents all the wounds, corporeal and psychological, suffered by the servicemen, and the irrevocable changes they will find at home. March’s homecoming dilemmas are markedly different from Russell’s. His teen-aged son doesn’t revere the death-haunted souvenirs his father has brought back for him, and the son pointedly acknowledges the enemy’s humanity, much to his father’s bewilderment. March’s daughter has worked for two years at a hospital, and is a no-nonsense, practical person, not requiring her father’s recommended lecture on birds and bees. Dana Andrews returns to his impulsive marriage, and to a wife he barely knows. Butch’s bar, where the three men will rendezvous several times during the course of the film, is neutral ground, making them feel as if they were on leave from the service. They escape to Butch’s when family pressures threaten to overwhelm them.

William Wyler, who had worked for Goldwyn on several films, including Wuthering Heights and The Little Foxes, was hired to direct The Best Years…. He was an Army Air Force veteran who had spent 3 ½ years in the service and had recently returned from overseas, bringing his experience to the film as both a serviceman and a director of war-time documentaries. Other major contributors to the film included cinematographer Gregg Toland, who had pioneered deep focus photography for Orson Welles’ Citizen Kane. This technique is used eloquently in this film, showing action in both the foreground and background, creating layered meanings as one character observes others at a distance. Hugo Friedhofer’s understated, emotional score is reminiscent of Aaron Copeland’s music. The Best Years…has a leisurely novelistic pace, and at almost three hours is much longer than the average studio film of its day.

There is not a weak performance in the ensemble cast. Frederic March won an Oscar for his role as a middle aged banker; at 49, the actor was at the end of his days as a matinee idol. He liked the complexity of the part: his kids had grown up without him, his new job overseeing GI loans creates unexpected conflicts and so he drinks to relieve his suppressed emotions. His character has psychological dimensions the other characters lack, “few actors would be capable of the combination of sarcasm, exasperation, scorn and self pity March invests into the otherwise fairly obvious line, ‘Last year it was kill Japs and this year it’s make money’” (Anderegg). Top billed Myrna Loy had been wary of William Wyler’s reputation as a bully who insisted on numerous retakes, but they got along well. She said of the experience, “Although that is perhaps my most serious film, as moving and meaningful today as it was then, Freddy and I did with great humor, otherwise it could have been trying” (Kotsilibas). Teresa Wright, playing their daughter, said years later, “To me their scenes still stand as the epitome of married love on the screen.”

Wright’s character is romantically involved with Dana Andrews, who conveys stoic suffering as the mismatched husband of trampy Virginia Mayo. But the most remembered performance is that of Russell. Sherwood had seen a training film called Diary of a Sergeant, which told Harold Russell’s own story, that of a handless paratrooper and his rehabilitation. His character had originally been envisioned as a soldier with combat trauma, but this less visible injury was changed when Russell became part of the cast. Wyler was able to integrate his amateur performance seamlessly into the professional company. Russell won two Oscars for his part, one as Best Supporting Actor and an honorary one “for bringing hope and courage to his fellow veterans.” Miss Loy said of meeting him, “The first time we met, Harold made a point of reaching out with those hooks and taking hold of my hand. You didn’t put him at his ease, he put you at your ease. It was unbelievable—before long you didn’t even notice them anymore. Yet, somehow, that very acceptance of his was an indictment, inspiring deep, knowing resolve to see that this would never happen again. The tragedy of course is that it keeps happening—in Korea, in Viet Nam, in the Middle East and Central America. I’ve spent most of my life opposing war. Harold is more practical. He has devoted his life to rehabilitating war casualties” (Kotsilibas).

Hugely praised when released, this film was the winner of many awards and 7 Oscars (of 8 nominations) including Best Picture. It has also suffered somewhat of a critical backlash in recent years, to some, “What may have looked courageous and innovative in 1946 looks tame and evasive today” (Anderegg). But, in the context of post-war American filmmaking, it broached topics forbidden by Production Code censorship, such as wartime sexual liaisons, alcoholism and the sometimes hypocritical reception of the returning soldiers. Dana Andrews’ nightmares, and his self-treatment by reliving some of his wartime trauma in the nose of a junked plane, would be clearly recognized today as the symptoms of a post-traumatic stress disorder. The stoicism of the Greatest Generation sometimes became self-destructive in the pre-therapy “I have to work this out all by myself” era. No suffering soul is ever helped by a spouse’s irritated “snap out of it.” In fact, the film itself became therapeutic as the audience saw, for example, both the joy and the hesitation in the faces of the reunited families who had been living apart for so long. It was hard for audiences to acknowledge that wives and children had become estranged from absent husbands and fathers, that women may have reluctantly returned to the home from the workplace where they had enjoyed unaccustomed autonomy and that the hasty wartime marriages that sexual mores demanded were often repented at leisure. The film was “emotional dynamite for American post-war audiences” (Peterson) and remains an important cinematic commentary to this day. 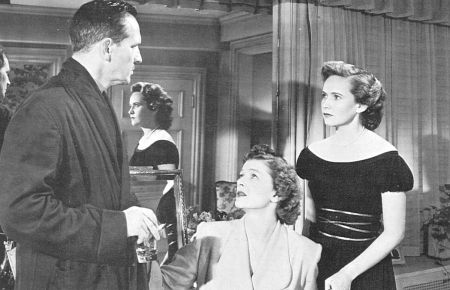 (Photo from “Myrna Loy” by Gene Ringgold in the February, 1963 Films in Review. Sources include: Myrna Loy: Being and Becoming by James Kotsilibas and Davis A. Loy, Frederic March: Craftsman First, Star Second by Debora C. Peterson,
William Wyler by Michael A. Anderegg, American War Film: History and Hollywood by Frank McAdams.