Emotional spasms wrack a suburban paradise when a schoolteacher is prescribed the miracle drug cortisone for pain. His wife witnesses as (the tagline put it) “a handful of hope became a fistful of hell.” Rebel Without a Cause director Ray imagines “Father Knows Best reconfigured as Greek tragedy” (Scott Foundas, Village Voice). New Cinemascope print from Fox.

Bigger Than Life is a film I remember watching on The Early Show, the movie program I watched on tv daily after school. At the time, I was living in one of those post-war suburbs, all with stay-at-home moms and WW II vet dads, who worked every day at middle class, mostly white-collar jobs. This film terrified me. Looking back, I can see that the setting of the film is identical to the comforting environs of the tv sitcom, echoing our own lives. But, the film begins with horror movie music, and each scene is full of disquieting images. It is our own placid lives gone horribly wrong.

Starting in the exact same place as Pleasantville, the film which ended the first part of our Norman Rockwell: Sunshine and Shadow film series, with a boy sitting in the family living room, watching tv. Television, another drug, takes viewers out of an uneasy reality. Ed Avery (James Mason) is scrambling to make ends meet and living a lie. His teacher’s pay is not enough for a comfortable lifestyle, but he fears the revelation of his financial situation, not just to his neighbors and friends, but to his own wife, whose blind faith in her husband is apparently boundless. Their home is decorated with maps and travel posters denoting a striving for a worldly sophistication that is both elusive and undervalued in the suburbs.

Although this is a color film, the palate is dull, browns and greys… with certain bright shades used expressionistically—again, like Pleasantville. Note the use of red within the frame, the edgy purple pill bottle, the dangerously orange dress. They are danger signs, like James Dean’s red windbreaker in Ray’s Rebel Without a Cause, here echoed in the son’s jacket.

The family is located as a place of both peace, but also of ultimate danger. A glass of milk, the most wholesome of drinks, can create psychological mayhem. Couples are comfortably paired off, but an unmarried lady schoolteacher (especially a pretty one) can cause undercurrents of anxiety, and Wally Gibbs (Walter Matthau) the bachelor gym teacher operates treacherously outside the suburban couple system, in spite of all the ceaseless urgings to pair off.

The film stars James Mason, rather oddly cast as a typical American school teacher. Mason studied architecture at Cambridge, but had some experience in theatricals and decided that during the Depression there was more of a chance finding a job in acting than in architecture. He became a screen heartthrob as a series of rake and scoundrel in a series of British historical films. His UK film career peaked when he starred as the wounded Irish revolutionary seeking shelter in Carol Reed’s Odd Man Out. Mason had always been contemptuous of England’s film industry, and he came to the US planning to recreate his matinee idol stardom. The studios were not anxious to cast him as a romantic hero, and the dream factory did not care for his rather pompous press statements. But, in 1954 he received an Oscar nomination for co-starring with Judy Garland in A Star is Born, and had his most financially successful release, ever, Walt Disney’s 20,000 Leagues Under the Sea, where he played Captain Nemo. Typically, for he was often his own worst enemy when it came to selecting projects, he was unable to cash in on his newfound success, and his career languished

Nicolas Ray was devastated by James Dean’s death; he and the Rebel Without a Cause star had hoped to make other films together. He read the story, “Ten Feet Tall” by Berton Roueché in the New Yorker. Supposedly upset by the low wages paid to America’s teachers, he convinced 20th Century Fox to make this, one of the two films he was pledged to make under contract. With James Mason, looking for suitable projects, decided to produce the film for Ray, resulting in a lot of freedom for the director.

The first script, written by Cyril Hume and Richard Maibaum made the mild-mannered teacher a Jekyll and Hyde character, reasonable during the day and dangerously erratic at night. Revised at some length by Gavin Lambert and Clifford Odets and by Ray himself, this film marked Ray’s last relatively peaceful collaboration with the Hollywood studio system. In the story, the character was careful about following his prescribed dosage, but the psychotic effects of the cortisone resulted from the doctors’ inexperience with administering the drug. The AMA insisted that the script show that Ed Avery increases his dose against doctors’ orders. Fox was disturbed when they heard that Ray was not treating CinemaScope with the usual respect, shooting strange angles and giant close-ups. In fact, although the setting for the film is Rockwellesque, it was hard to screen cap scenes that invoke that idyllic reality, since nearly every scene has looming shadows or alarmingly off kilter points of view. Bigger Than Life was received triumphantly at that year’s Venice Film Festival. But, the drug industry hated it, the critics lambasted it and the public stayed away. Mason suggested the wide screen Cinemascope and DeLuxe color were the problem, they, “had a way of making all films look like very cheap advertisements from colour magazines” (Sweeney 27).

Barbara Rush’s Lou Avery is a particularly interesting character. Infuriating to us today, she’s presented as a typical housewife of the day. She seems quite a bit younger than her husband and one can only imagine their courtship, filled with exciting travel plans, but resting on his abilities as a solid provider. Her loyalty is to her husband, and to her marriage, trumps personal happiness, (unthinkable post Me Generation). She is single-mindedly determined to keep any hint of discord behind the walls of the family home. One of the major conflicts of the film is when, or even if, she will finally stand up to her husband’s erratically dangerous behavior. When is he crossing the line? We ask the same question as we silently urge her to break the family wall of silence. Keeping the family affairs private trumps not only her happiness, and her son’s, but eventually their safety and mental health, as well.

Many of the French New Wave directors loved Nicholas Ray’s films, they saw the director as a sterling example of someone making extremely personal films within the Hollywood studio system. They adored They Live By Night, In a Lonely Place, Johnny Guitar, Rebel Without a Cause. But, at the Venice Film Festival, the film was brushed aside “because you cannot construct a tragedy out of as ordinary an incident as a man taking an overdose of cortisone” (Truffaut 145). But Truffaut observed, “The cortisone wasn’t responsible for Avery’s megalomania; it simply revealed it” (ibid) and that the method could easily have been alcohol, another drug, anything. It is not documentary, it is meant to be a fable, one which includes Ray’s antipathy towards doctors, whom Truffaut thought he shot in threatening, gangster-like groupings. “A film of implacable logic and sanity, Bigger Than Life uses those very qualities as targets, and scores a bull’s-eye in every frame” (Truffaut 147).

This was precisely Ray’s intent. He explained that the film shows the folly of believing in any miracle, whether it be drugs, alcohol, psychiatry or religion or a peaceful suburban family. The cortisone exaggerates what was wrong in Ed’s world to begin with. It’s melodrama, but it’s also tragedy, done in an intensely flamboyant style. Where does Ed begin to cross the line from confidence to paranoia?

Unsurprisingly, the film was a box office disaster. One contemporary review questioned the need for color and CinemaScope, when those tools perfectly delineate Ed’s skewed universe. Time has made Bigger Than Life appear prescient. “Its emotional intensity—a result, partly, of the taut economy of the narrative, which runs only 95 minutes—its thematic depth and its wholly convincing analysis of the social ills of middle-class America in the 1950s are such that it may justifiably be seen as Ray’s masterpiece” (Andrew 104). 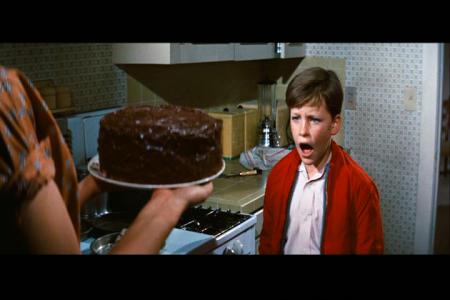 The Films in My Life by François Truffaut, The Films of Nicolas Ray: Poet of Nightfall by Geoff Andrew, Nicolas Ray by John Francis Kreidel, Movie Love in the Fifties by James Harvey, James Mason: A Bio Bibliography by Kevin Sweeney, “Bigger Than Life” by George Wittman, Films in Review October 1956.