A tough and risque lark about cheating cheaters, Blonde Crazy pairs Cagney, fresh from his brutal gangster triumph, Public Enemy with the lush and sassy Blondell. The jazzy comedy was written for them, and they are amorous buddies, a bellhop and a chambermaid riding an escalating whirlwind of swindles. Tart and sweet Blondell, born in a trunk on the vaudeville circuit, was the most perfect romantic partner Cagney ever had on film. He really was a street smart tough guy, but one who aspired to art, agitating relentlessly for good scripts. This overlooked gem crackles with their movie-star electricity.

The Great Depression lurks just offscreen in many Pre-Code movies. Pre-Code refers to films made between 1930-34, before the Motion Picture Production Code was strictly enforced. This was an industry group, like the one that assigns film ratings today, that hoped to stave off a threat of Government censorship. The desperation of American citizens was one of the things the Hays Office, which was responsible for censoring films, wished to erase from the screen. In the US, it was work or starve. But they did not want a medium as potent as the movies showing the desperation of average citizens, breadlines, Hoovervilles; the women who sold themselves for the price of a meal. 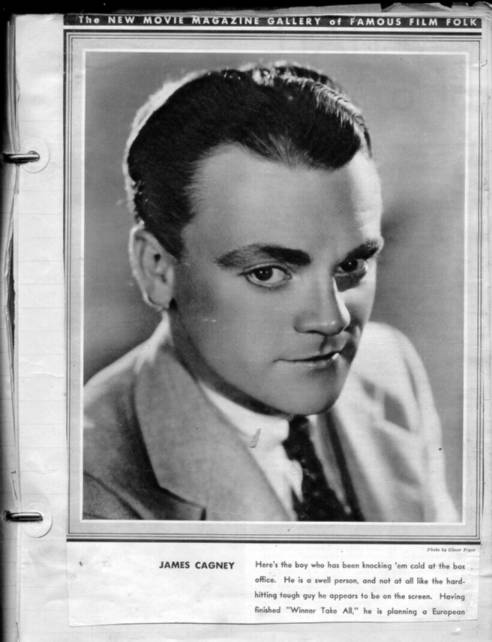 “Here’s the boy who has been knocking ’em cold at the box office. He is a swell person, and not at all like the hard-hitting tough guy he appears to be on the screen. Having finished “Winner Take All,” he is planning a European…”

Warner Brothers was a factory, churning out 52 pictures a year. Players worked day and night 6-7 days a week. Printing more than one take had to be oked by the head of production. The films of the 30s were just programmers, if they were art, it was by accident. Cagney made 5 films in 1931, Blondell made 8 and the director, Roy del Ruth made 10 films in 18 months of 1931-33. As Mick LaSalle points out in Complicated Women, Joan Blondell made 27 films between 1931-1933, as many as Greta Garbo made in her entire career. But, in most cases Warners rough edges have aged better than MGM’s glamour. Smart Money with Edward G. Robinson, and Cagney in his last co-starring role, was filmed just before this film, and shares a number of sets, and in one case, a gown worn by a leading actress in Smart Money shows up on an extra in Blonde Crazy.

Blonde Crazy was filmed in three weeks. The film was written for Cagney and Blondell by the team of Kubec Glasmon and John Bright, who drew on their own familiarity with Prohibition era Chicago life to write a novel called Beer and Blood that became Cagney’s star-making The Public Enemy. Gangster films were an inside-out version of the get-rich quick business schemes of the 1920s that resulted in the Crash. Edward G. Robinson in Little Caesar and Paul Muni in Scarface played versions of Italian mobster Al “Scarface” Capone. Cagney himself had just supported handsome Lew Ayres playing a milder take on Capone in Doorway to Hell.

The Hays Office considered Cagney’s screen image threatening to public morals, and the film’s remorseful ending was tacked on later at their insistence. He signaled the end of the pretty boy hero; urban, Irish, masculine, more like the criminal loner enshrined in popular culture by John Dillinger, than businessman Capone. Thomas Doughtery’s fascinating book Pre-Code Hollywood explores the topical underpinnings of the gangster film

Cagney’s characters could win a fight, and be funnier than the next guy, an essential part of the movie male’s self-image, just being codified in the talkies. He was soulful, with a mask of toughness. Unlike Robinson, a thoughtful “Method” type actor who used his salary to amass a famous art collection, or Bogart, an upper middle class WASP who spent his career playing against type, Cagney projected heightened facets of his own personality. He had grown up in a poor NYC neighborhood, a tough and wily street brawler. One close boyhood friend died in the electric chair for murdering a cop, and plenty of his other pals ended up in Sing-Sing.

He was serious about his craft, insisting on the best possible scripts (and threatening to quit the movies and move back to New York, or later, his farm in Martha’s Vineyard, which he did periodically. The “European vacation” alluded to in the picture caption was the press release excuse covering a walkout for refusing to play in Blessed Event ). He was a founding member of the Screen Actor’s Guild, which eventually demanded perks for actors like quitting time. He was contemptuous of most of his directors, and the vocal tricks, gestures, things he called “goodies” to invigorate his characters were devised by him. This didn’t sit well with Blonde Crazy director Roy del Ruth, who told him to cut it out…until three days of lackluster rushes provoked the front office to insist Cagney be allowed to do whatever he wanted in front of the camera. Del Ruth pointedly ignored him from then on.

Cagney was married for 64 years to the vaudeville partner he wed in 1922. He hated romantic scenes. He wouldn’t even kiss an actress on the mouth if he didn’t like her; in at least one film, the final clich ends with Cagney kissing his leading lady chastely on the forehead. But, Blondell and Cagney were lifelong pals. They met at a play audition in 1929. Blondell wrote: “Suddenly, a few feet from where I was standing, squashed, I became aware of a young man’s unforgettable face grinning at me. His hair was a Van Gogh, Renoir, Titian red with blobs of gold waving through. His eyes were delft blue, with the longest, thickest lashes I had ever seen. He blinked his eyes at me, and since I had never seen a blink like that before, I instantaneously fell in love. The jolt was so horrendous, I kept my eyes floorward.” 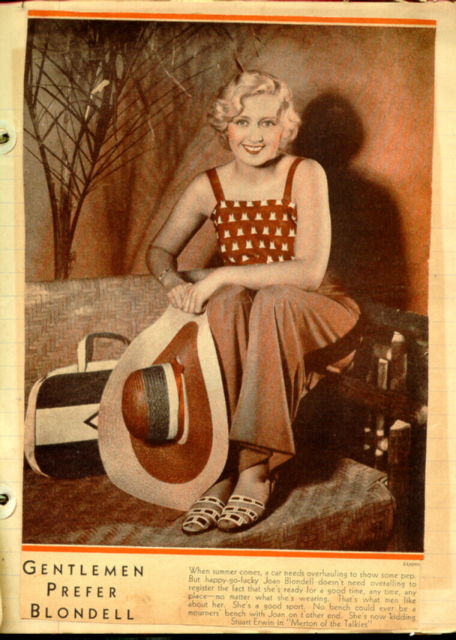 “When summer comes, a car needs overhauling to show some pep. But happy-go-lucky Joan Blondell doesn’t need overhauling to register the fact that she’s ready for a good time, any time, any place–no matter what she’s wearing. That what men like about her. She’s a good sport. No bench could ever be a mourners’ bench with Joan on t’other end. She’s now kidding Stuart Erwin in Merton of the Talkies.” 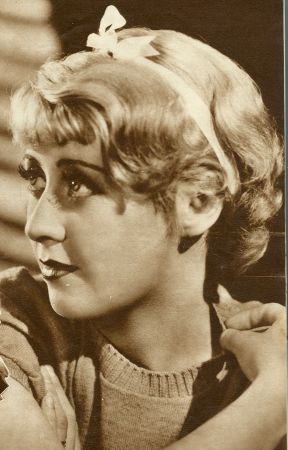 A portrait from the February, 1934 Silver Screen Magazine.

Molly Haskell writing about Blonde Crazy at a 1970s revival, celebrates …”the rapport between Cagney and Blondell–buddies, would-be lovers, he calling her “hon-ey” she self-reliant and soft, giving as much as she gets and more. Blondell’s beauty as a” broad” is that she can outsmart the man without unsexing him. Cagney’s beauty as a man is that he can be made a fool of without becoming a fool. They flesh out the spare Warners script with intimations of love, life, confidence and sexual equality that only reinforce all one’s suspicions that they don’t make movie stars-or men-like they use to.” 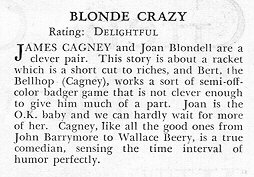 (Photos from Hilda Price’s 1932 Movie Star Scrapbook. The caption under Blondell’s photo is particularly incomprehensible.Couldn’t the caption writer come up with anything else to say? The first capsule review is under the original title, Larceny Lane, Silver Screen, December, 1931. The second is from Silver Screen, March, 1932)