Billie Dawn is the unpredictable mistress of millionaire junk dealer Harry Brock. Afraid she’ll embarrass him in front of the congressman he is planning to bribe, Harry hires a tweedy tutor to smooth her rough edges.  Of course, everyone gets the education they deserve.  Almost seventy years ago, Judy Holliday won the Best Actress Oscar in this comic fable, confounding her heavyweight competition, Bette Davis in All About Eve and Gloria Swanson in Sunset Blvd.

Comedy heroines can get away with plenty that dramatic heroines cannot. But, unlike the madcap heiresses of 1930s screwball comedy, the wacky behavior of the 1950s dumb blonde is linked to dimness, rather than a liberating eccentricity. Holliday was a comedienne of shrewd intelligence and exuberant talent. Her not-so-dumb blondes were a model for the slightly later comic characters of Marilyn Monroe.

Holliday’s Oscar win is considered one of the great upsets in Academy Award history. From a modern point of view, it does not seem at all odd that two flamboyant “older” actresses, playing aggressive, sexually active women with younger lovers, were rejected in favor of a pretty young actress validating the 1950s status quo. But Billie Dawn’s stealth liberation is deceptively powerful, and in the current political climate, inspirational.

Garson Kanin wrote the play, Born Yesterday for Jean Arthur, who dropped out right before opening night. Judy Holliday learned the role in 3 days, and played it on Broadway for 4 years opposite Paul Douglas.  Douglas did not want to have to deal with Columbia Pictures studio head Harry Cohn to recreate his role in the film.  In the play, Harry, the millionaire junk dealer, was a more sympathetic character, and the young reporter (played by Gary Merrill) was a bit of a prig.  One writer offered the following horrific opinion, “When Douglas punched Holliday, it was at once painful and erotic” (Levy 190).  Theater audience members were conflicted at whether they wanted Billie to end up with Harry or Paul.  Broderick Crawford specialized in boorish characters, and was cast in the film because he had just starred in All the King’s Men, for which he would shortly win an Oscar. His Harry Brock is not much of a romantic rival for William Holden’s Paul Verrall. 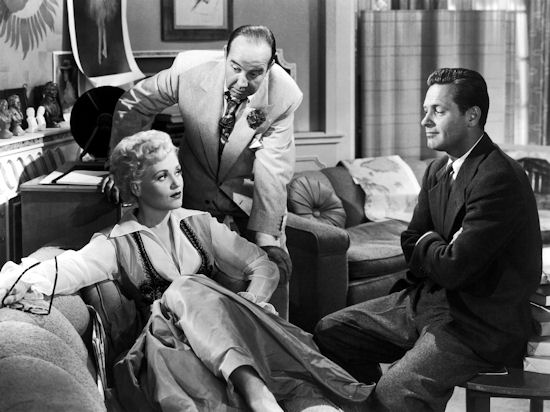 Harry Cohn of Columbia paid a record-setting $1 million for the play Born Yesterday intending to star his hottest property, Rita Hayworth. He was forced to shelve the project after her marriage to Aly Kahn.  If Rita couldn’t do it, he’d take one of his other contract actresses, Alice Faye, Barbara Stanwyck or Lucille Ball.  Cohn, a famously vulgar and abusive film mogul, did not want Holliday “that fat Jewish broad” in the part. Director George Cukor shrewdly showcased Holliday in a pivotal part in the Katharine Hepburn–Spencer Tracy film Adam’s Rib and he relented.

Garson Kanin would not adapt his play for the screen without more money, so Albert Mannheimer was hired to write a draft that everyone hated, even though he would eventually be nominated for an Oscar for the script.  Cohn then tapped the Epstein twins, Julius and Philip, who had written Casablanca, among other great hits, to do a rewrite.  It was so extensive, that Cohn felt he wasn’t getting his money’s worth out of the original script, and Garson Kanin was brought in, uncredited and in self defense, to repair the damage to his play.  In order to get the comic timing just right, Cukor rehearsed the actors for two weeks and then staged six performances before an audience of studio employees.  Holliday was thrown off her timing, since you don’t hear any laughter during filming, laughter she was used to hearing on stage.  The performances gave her the confidence that the laughs were there, even if there was quiet on the set.  Cukor felt an affinity for the Pygmalion-esque theme of the film, as he was used to transforming actresses into movie stars, and in this case, as in many others, Oscar-winners.

To open out the stage play, Cukor filmed two weeks on location in Washington D.C., visiting the Supreme Court, the Washington Monument, the Treasury Department, the National Gallery, the Jefferson Memorial, the Library of Congress, and the National Archives, where the movie lights had to be dimmed to prevent damage to the Constitution.  The cast stayed at the Hilton Hotel, where William Holden and Broderick Crawford, both serious drinkers, ordered champagne and caviar from room service every night and charged it to Columbia Pictures. 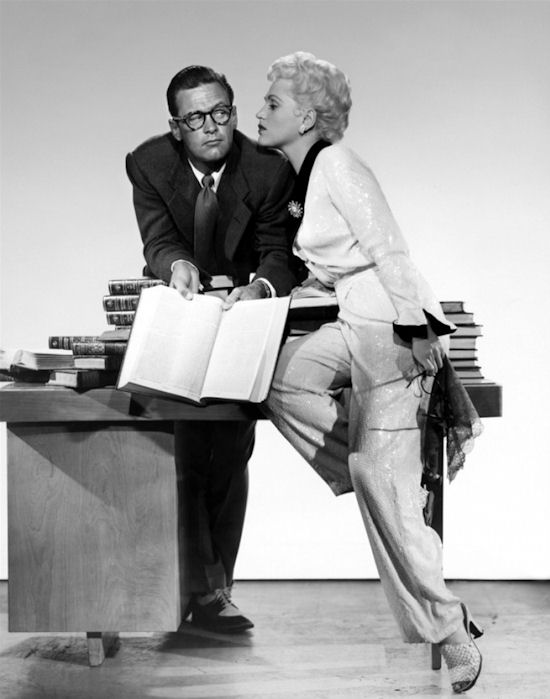 There are a lot of great posed photos from this film.

Judy Holliday was born Judith Tuvim in Brooklyn, but grew up in Sunnyside, Queens.   Her obit in the NY Times said “she could not enter the Yale School of Drama” which I assume means that she was kept out by the Ivy League School quotas for Jewish students.   Still a teenager, she assembled the comedy group, The Revuers, with her friend Adolph Green, and his friend, Betty Comden; their occasional accompanist was Leonard Bernstein.  When material became scarce, they wrote their own scripts; she originally wanted to be a writer and director, not a performer.  She changed her name to Judy Holliday, which was a creative translation of her Hebrew surname, Tuvim.  The Revuers were hired to appear in a Carmen Miranda movie called Greenwich Village. Their act was cut out of the film, although they can still be glimpsed as extras. One of their nightclub routines was a satire of the early days of talking pictures, which Comden and Green expanded into the brilliant musical Singing in the Rain. In the film, Jean Hagen closely modeled her performance of the screeching diva Lina Lamont on Holliday’s performance in the nightclub skit.

On Broadway, Billie Dawn had five costume changes, but for the screen, Holliday was glamourized in classic Hollywood style, with 13 elaborate outfits by designer Jean Louis. The censors were very concerned that the curvy Holliday was sufficiently covered up, as no cleavage or breast movement was permitted on screen.  She said later, “I love to cook and I love to eat what I’ve cooked. But when I was doing Born Yesterday for Columbia, I had to diet for months. I had to show up at the studio 2 hours before they started shooting. From 7-8, they worked on my hair. From 8-9, they worked on my face. And, they bleached me every other day.” (*) 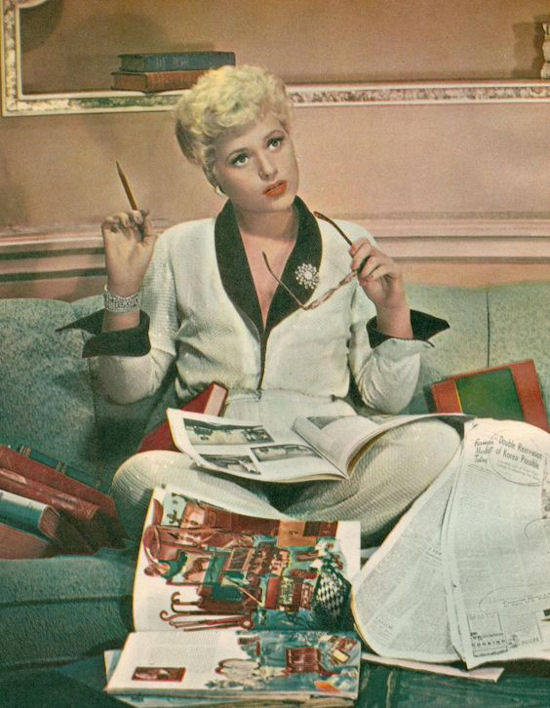 This Jean Louis pantsuit is covered in sequins. He did not particularly like dressing her, because he thought she wasn’t glamorous enough, but when he saw her in character, in his costumes, he changed his mind, deciding that she was a “great actress.” (Landis 183).

Holliday was called before the House on Un-American Activities Committee right after making this film. She mystified the questioners who accused her of Communist activities by answering in the voice and illogical logic of her Born Yesterday character, Billie Dawn. The senators accused her of being a Communist dupe, which she acknowledged, saying that she had hired two private investigators to find out what she had been doing.  She escaped being blacklisted, but her career was short, six Broadway plays and six other films.  She continued to act in New York City, and won a Tony for Bells Are Ringing in 1960.  She died of breast cancer in 1965 at the age of 43. No grand mystique clung to her after her death, as it so often does to movie stars who die prematurely.  Her obit in the NY Times said, “In one line, she managed to forge the image of an intellectually vacuous young woman with a peasant shrewdness and hard honesty: “Do Me a favor will ya, Harry?” she told her boorish lover in the comedy.  “Drop dead.”

William Holden was born William Beedle in O’Fallon, IL.  His family moved to California when he was a boy, and he enrolled after high school at South Pasadena Junior College as a chemistry major.  One of his classmates was Jackie Robinson, and like him, played sports.   Holden became an amateur boxer and began acting in theater, interests which would merge when he was cast in the title role of the film version Clifford Odets’ play, Golden Boy, as a youth forced to choose between boxing and the violin.  At 21, he became a star, and played a lot of handsome heroes before enlisting in the Air Force during WW II.  After the war, his film career carried on as before, until Montgomery Clift refused to play a gigolo in Sunset Blvd, and Holden got the part.  He co-starred in Born Yesterday immediately afterwards.  Holden’s cynical outlook and slightly used pretty boy looks are shown to great advantage in these two films, and his career would peak in a series of excellent roles in the 1950s and his winning an Oscar for Stalag 17.

Broderick Crawford was the child of actors, his father in vaudeville, and his mother was comedian Helen Broderick, who is seen most often as a sidekick of Astaire and Rogers in Top Hat and Swing Time.  He went to Harvard for three weeks, and then worked as a longshoreman, and on a tanker.  He acted on the NY stage (he created the role of Lennie in Of Mice and Men) and then played small parts in films.  His major career was basically this film, and the one for which he won a Best Actor Oscar in 1949, as a politician modeled after Louisana populist Huey Long, in All the King’s Men.  In the late 50s he played a cop in Highway Patrol, which is how baby boomers remember him.  He finished his career playing small parts in low-budget European films.

In Born Yesterday, Harry’s junk business represents the abuses of capitalism, which must be reformed by the ideals of democracy. This is symbolized by the 1950s agenda of taming Billie’s comically rowdy behavior and indoctrinate her with a little middle class virtue and restraint, especially sexual restraint. This film is shockingly topical in 2018, I don’t have to connect the dots for you. In many films, hero or heroine are transformed when they take off their glasses. In Born Yesterday Billie puts her glasses on. 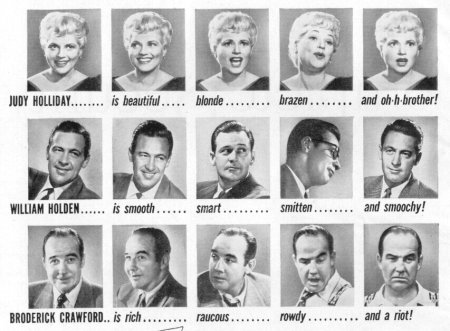 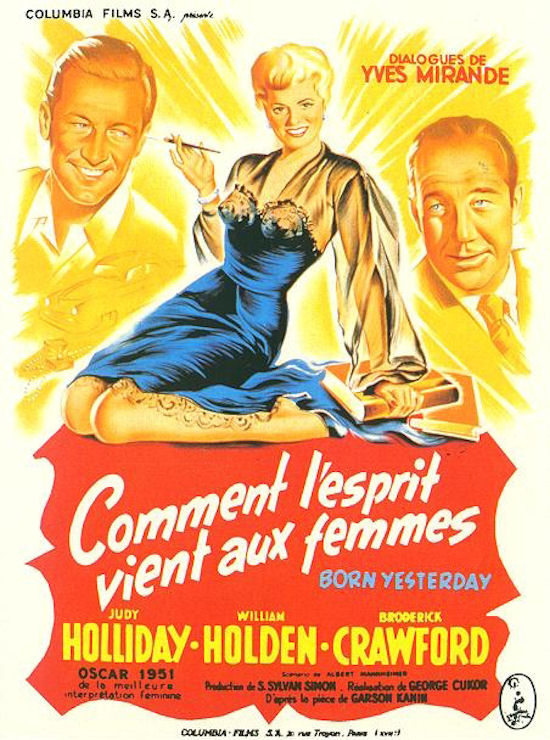 * I copied this quote in 2000, it must have been out of a biography of Judy Holliday no longer available in the library in 2018.