An amoral thug who styles himself after Humphrey Bogart, and an aimless girl selling the Herald Tribune live on borrowed time, falling in and out of bed and soulless crime. A jazzy Paris of the imagination intoxicates this subversive film noir. “Breathless is generally regarded as the seminal film of the French New Wave and it still feels revolutionary—and seductively dangerous—today” (Elliot Wilhelm).

Cinema is constantly reinventing itself. One of the more significant transformations occurred when a group of young film critics, disgusted with the genteel literary “tradition of quality” they felt stifled French filmmaking, exploded onto the international cinema scene in 1959 with la nouvelle vague or New Wave. Godard’s Breathless (A Bout de Souffle), as well as Truffaut’s The Four Hundred Blows are the vanguard of this style. These directors adored classical Hollywood cinema (and were the first people to take studio directors like Alfred Hitchcock seriously as artists) but were also steeped in the philosophy of existentialism, which stressed both free will and the absurdity of all human striving. Their heroes were “outcasts, antiheroes and loners” (Lanzoni) and the films reveled in a low-budget aesthetic, off-hand dialogue, outdoor locations, hand held camera, jagged editing, and a new freedom to show sexual activity on the screen.

Jean-Luc Godard was one of the film critics in an iconoclastic crowd including Francois Truffaut (who supplied the story for Breathless) Claude Chabrol (the film’s assistant director), Jacques Rivette and Eric Rohmer. They were obsessive cineastes who met sitting a few seats away from each other in the dark of Henri Langlois’ Cinematheque Francaise watching perhaps 1000 films a year. Their shared education, beginning in the early 1950s, moved from the screening room to their articles in Andre Bazin’s magazine Cahiers du Cinema. Here, they devised the theory of the politique des auteurs (that one man created one film, just as a single author writes a book) and the camera-stylo, the camera as pen. In 1959, they began to recapitulate a half century of film history in their own work. Alain Renais, Claude Lelouch and Jacques Demy also made their first films in 1959, the year of Antonioni’s L’Avventura, Fellini’s La Dolce Vita, Bergman’s The Virgin Spring and Cassavetes’ Shadows.

“So, it was not the substance of A Bout de Souffle that gave it its unique cachet, but rather its subtext—the attitudes of the filmmaker, his sensibility—that set it in stark contrast to the general tradition of film history.” (Monoco). Instead of writing criticism, Godard would make films…or tv shows, it was all the same. His work was not supposed to be entertainment, but essays, meant for participatory viewing. When asked in exasperation by a more conventional filmmaker if he would concede that films should have a beginning, a middle and an end, he said, “Yes, but not necessarily in that order.” (Monoco).

Godard was born into a bourgeois family, but became an anti-bourgeois, and his films became more and more radical as the end of the 1960s approached. He’s still making films for an increasingly rarified audience. But, during the 8 years between 1960-68, he made 14 features and 5 shorts which transcended and redefined genre filmmaking, as diverse as the mock sci-fi detective film Alphaville, and the lush Cinemascope dissection of big-budget film-making Contempt, starring sex kitten Brigitte Bardot at her most sex-kittenish.

Godard raised the money for this film based on Truffaut’s story treatment, since The 400 Blows had just created a sensation at Cannes and Truffaut was suddenly bankable.Godard’s cinematographer was Raoul Coutard, a former war correspondent and photographer who used a hand-held camera, natural light, and a fast black and white film created for still and not motion-picture photography. These cutting-edge techniques transformed the traditional visual aesthetic. Breathless was made in 4 weeks, shot silent and using a hand-held camera because conventional camera and lighting set-ups would have added time to the shooting schedule, and it was not in the budget. The jump cuts were used partly because the film was an hour longer, and cutting out sections of the takes brought it down to a manageable length. The language was slangy–and vulgar–in a way French film dialogue hadn’t been before. The heroine’s shaky, heavily American-accented French was a metaphor for nagging miscommunication. “I told the story of an American girl and a Frenchman. Things couldn’t go well between them because he thinks about death all the time while she never gives it a thought…The American, Patricia, is on a psychological level, whereas the guy, Michel is on a poetic level. They use words—the same words—but they don’t have the same meaning.” (Godard interview in Andrew).

American actress Jean Seberg was sorry that she had agreed to be in the film, and the more experienced Belmondo was disgusted with what he considered to be an amateurish production. Unexpectedly, the film would both make them cinema icons, to fulfill the fate of all movie stars, “to become immortal and then die” as one character in the film wishes for his own fate.

Godard, like Truffaut, was somewhat of a social misfit (perhaps all obsessive cinephiles are!), and they had both had their own personal brushes with petty crime. Truffaut later said that Godard “was in the depths of despair when he made that film” (Hayward and Vincendeau) but when it was received ecstatically around the globe “he was no longer a penurious critic, but a famous filmmaker” (Bellour). He felt it became almost too famous, but in fact, only 260,000 people saw it in Paris in its original 7 week run.

“’Am I unhappy because I am free, or free because I am unhappy?’ asks Jean Seberg. It’s at one and the same time a Catholic film because it shows us that human beings play with their lives, and every second, stage their own executions in one way or another, and it’s a Marxist film, more Marxist than Salt of the Earth because it shows the state of moral decadence of your people in a capitalist country. Besides, Catholicism and Marxism, they’re the same thing; it’s just a matter of how you are engaged in life. Breathless is a film about the necessity of engagement” (interview in Andrew).

“What sneaks up on you in Breathless is that the engagingly coy young hood and his loose random grace and the imperviously passive butch American girl are as shallow and empty as the shiny young faces you see in sports cars and in suburban supermarkets and in newspapers after unmotivated, pointless crimes. And you’re left with the horrible suspicion that this is a new race, bred in chaos, accepting chaos as natural, and not caring one way or another about it or anything else…The characters are casual, carefree, moral idots…And possibly because we Americans live among just such people and have come to take them for granted, the film may not, at first, seem quite so startling as it is. And that’s what’s frightening about Breathless: not only are the characters familiar in an exciting, revealing way, they are terribly attractive” (Pauline Kael in I Lost it at the Movies).

“Although it exists in an anti-conventional world and although Michel’s hero is Humphrey Bogart, this is not a hard-boiled film. It is the epic of a romantic outlaw, as egocentric as romantics and outlaws always are, whose life seems the only natural one to him. It is a film of flawless consistency and uncompromised truth. It may not be your truth, but that, of course, is not the primary point…” (Stanley Kaufman, quoted in Andrew). 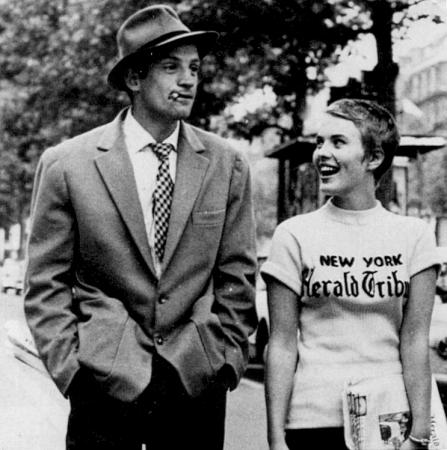