Pinky, a vicious hood, tries to cover up a rival’s murder in this British noir set in the seediest back alleys of the resort town of Brighton. Adapted by Graham Greene from his novel, “Richard Attenborough will scare the bejesus out of you” (Michael Sragow The Baltimore Sun). Restored print from Rialto Pictures.

Graham Greene was a novelist, screenwriter and film critic best known for his novel and screenplay for The Third Man. His first novel was published in 1929, and he supplemented his fiction income by free-lance journalism. His reviews in The Spectator set a high standard for film criticism at a time when it was regarded as a trivial pursuit, although his speculation on the effect of Shirley Temple’s pre-pubescent sexuality on middle aged men in John Ford’s Wee Willie Winkie resulted in a lawsuit which still prohibits this essay from being published today. He wrote popular fiction but added layers of moral ambiguity with a literary skill not often found in genre writing. He was attracted to political themes, and countries in crisis, in novels and films such as The Ugly American (set in Viet Nam) and Our Man in Havana and was a member of the British Secret Service (MI6) during WW II. His conversion to Catholicism deeply informed his writing and the “guilt saturated, Catholic undertow” (254 Ballinger) of Brighton Rock contributed to its memorable atmosphere. His writing was central to the development of film noir styles on both sides of the Atlantic. Hollywood filmed his novels This Gun for Hire and Ministry of Fear; almost all of his 25 novels and many of his short stories were filmed, some more than once.

Greene intended Brighton Rock to be a simple detective story, a popular fiction suitable for sale to the film companies. It was steeped in the atmosphere of the resort of Brighton, where Greene made many trips seeking inspiration. One hour south of London, and home to a signature hard candy called “Brighton Rock,” in the 1930s tough and murderous racetrack gangs terrorized the holiday town. Ida Arnold, the traveling show performer who begins to investigate the murder, was supposed to be the central character. Eventually, the character of Pinky took over, as Greene said, “the novel…turned around and bit me” (RP).

Greene’s Catholic obsession with the allure of sin is clearly on display here. “In some strange way his religion and his skill at telling stories on film seem here to be two faces of the same rare coin…why filmmaking might have appealed to him so strongly. In what other activity could he so reliably enjoy the dashed hopes, the queasy compromises and the nagging knowledge of failure, which for him were the staple of life in this fallen world? (Rafferty).

Greene wrote “It’s true that I have a predilection for shady places,” he said. “It enabled me to understand Brighton and its seamy side. When I went there to work on novels, I would read up all the news about the fights between rival gangs, for in those days knives and razorblades were quickly drawn, particularly in the racing crowd” (TCM).

The book was published in 1938, and adapted for the stage in 1943, 20-year-old Richard Attenborough starred as the gangster, Pinky. Hermione Baddeley and William Hartnell also revisited their stage roles. John and Ray Boulting were identical twin brothers who traded producer and director roles throughout their careers. They are best known for creating the classic British comedy genre of the 50s and 60s which made stars of Ian Carmichael, Terry-Thomas and, especially, Peter Sellers. The Boultings commissioned a screenplay for a film version by noted playwright Terrence Rattigan, but Greene hated the adaptation, which he thought prettied up and rewrote it himself.

The film begins with a newspaper publicity stunt. A man hired to impersonate a character called Kolly Kibber arrives in Brighton to distribute cards that, when found, can be redeemed for a cash prize. But he’s recognized as one racetrack’s gang old enemy, named Fred Hale, whom they blame for the death of their former leader.

The daytime locations were shot in Brighton, using hidden cameras and real-life crowds. John Boulting was much taken with the seedy atmosphere of Brighton’s cheap boarding houses, modest tea shops and shabby bars. The town of Brighton objected to violent scenes being shot on location, since it would not be very good publicity, so these were either recreated on sets or shot at night. “The setting was not a backdrop; it was one of the characters” captured perfectly by Harry Waxman’s chiaroscuro photography. (BFI)

The established Colleoni gang was based on a real Brighton gang, the Sabini gang. As John Boulting said, “We had a marvelous little man called Carl Ramon, who used to carry the razor for Sabini, as our technical advisor” (TCM)

In the US, it was known as Young Scarface, a clear indication that it was in the spirit of American gangster movies. But rather than Prohibition being the engine of corruption, in Britain it was the wartime and post war deprivations that spawned the gangsters known as “spivs.” Although the verbose prologue title is careful to indicate that the crime depicted in the film had long ago been eradicated by the police, the characters are clearly post war “spivs.”

A contemporary review though the film “false, nasty, cheap sensationalism” (BFI) but over time the atmosphere has come to be appreciated. The script is based on fact, in spite of the disclaimer demanded by the town. The film was a hit, if not a big one, and a critical success. Although, it was Greene, himself, with the greatest praise, writing to John Boulting, “how delighted I was with the production. I think this is the first time I have seen one of my own books on the screen with any real pleasure” (RP).

Richard Attenborough was born in Cambridge, England. His younger brother is naturalist David Attenborough. After attending the Royal Academy of Dramatic Art, he debuted on stage at 18, and made his first film appearance in David Lean’s In Which We Serve in 1942, playing the first of a series of disreputable characters. He worked steadily throughout the 1950s, but became really successful in the 1960s, co-starring with Steve McQueen several times in Hollywood, most notably in The Great Escape. His first film as a director was Oh, What a Lovely War! and he won an Oscar for directing Gandhi, starring Ben Kingsley. He was knighted, and later made a life peer, he is now Lord Richard Attenborough, a distinction shared by only one other actor, Laurence Olivier. Attenborough later recalled: “Greene wrote to me after seeing the film. He mentioned his misgivings but added he didn’t think it could have been done any better. I’ve kept and treasured that letter… In those days the character of Pinkie was a macabre novelty in British films. It was hard to understand how somebody like that would feel as he razor-slashed you, or as he told a girl to put a gun in her mouth to shoot herself. That is the kind of enormity I had to convey.” (TCM)

Hermione Baddeley made her film debut in 1927, she played supporting parts in many films, including another excellent British noir, It Always Rains on Sunday. She was also in Mary Poppins, and had a supporting role on the US tv series, Maude.

William Hartnell who plays Dallow had played many supporting roles in British films, usually as a tough guy. He is best known for having created the role of Doctor Who in 1963, which he enjoyed as a complete change of pace for the roles for which he was known. If Spicer looks familiar, it’s because he played Mr. Memory in Hitchcock’s The 39 Steps.

Brighton Rock has been remade and was well received at the2010 London Film Festival. The setting has been updated to the mods and rockers era of the 1960s and stars Sam Riley as Pinky and Helen Mirren as the tenacious Ida Arnold. The main justification for the remake seems to be the freedom to show more graphic violence.

Yet, the original film was considered excessively violent, and Pinky’s weirdly puritanical sadism is terribly creepy. The Daily Mirror wrote “No woman will want to see it. No parents will want their children to see it. The razor-slashing scenes are horrific.” This prompted Grahame Greene to write a reply, saying in a published letter: “Your critic’s disgust is an indication that one purpose of the film – the presentation of a character possessed by evil – has been successfully achieved” (TCM).

The year 1947 was key in the genre known as British noir, with Odd Man Out, It Never Rains on Sunday and They Made Me a Fugitive as well as Brighton Rock all releasing that year. The film is still shocking today, “Like its counterparts of the same year, Brighton Rock marries an attention to the seedy underbelly of everyday British life—what Andrew Spicer has termed a ‘paranoid world of social and sexual corruption’—with a rich degree of shrewdly observed character analysis and local vernacular detail” (38 Hillier). Attenborough intense performance is disturbing, as is the depiction of Brighton Pier, “by daylight a venue of light entertainment and casual promiscuity, by night a site of murderous desire and retribution” (Hillier 40).

“…the rise and fall of this seaside hoodlum was a razor slash across the face of British Cinema. Moody, disturbing, realistic, nasty, exhilarating… pick your adjective, Brighton Rock is all of them” Total Film.

As Terrence Rafferty wrote of Graham Greene in The New Yorker, “Film is exciting, and impure in ways which obviously thrilled him to the depths of his soul. The movies are not innocent. That’s why he loved them like sin.” 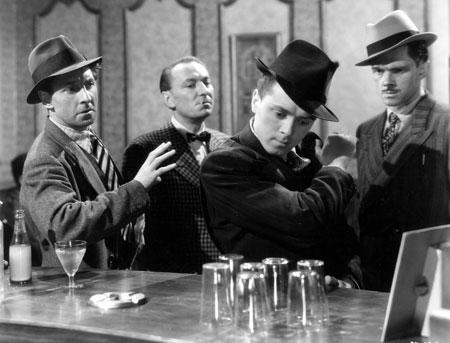