Butch and Sundance are easy-going, non-violent bank robbers until a railroad tycoon’s vendetta chases them to the wilds of Bolivia and their luck runs out. This beloved, prototypical buddy movie is an ode, not so much to the romance of the vanished Old West, as to the moment in time when dreamboats Newman and Redford were the sexiest men on earth. Lush (Oscar-winning) photography by Conrad Hall, crackerjack (Oscar-winning) dialogue by William Goldman (“I’ve got vision,” Butch announces, “and the rest of the world wears bifocals”) and a sappy 12-minute (Oscar-winning) score by Burt Bacharach.

Screenwriter William Goldman became interested in the Butch and Sundance story in the late 1950s. He researched their outlaw careers, and wrote the first draft of a screenplay in 1966 that kicked around Hollywood for a while. The studio executives hated the final third of the script, because, Goldman thought, “Butch did something Western heroes simply did not do, he ran away.” One studio executive told him flatly that Butch and Sundance had to stay and fight in the Old West. “I tried explaining that they really did go to South America, that what was so moving to me was these two guys repeating the past, then dying alone in a strange land. He replied, I don’t give a s*** about that–all I know is one thing: JOHN WAYNE don’t run away.” Goldman also calculated that until the final shoot-out there is a total of only about one minute of standard Western action. So it was not violent enough to be an action film, yet he felt it wasn’t funny enough to be a comedy.

When the screenplay finally did sell, it was for a record (at the time) $400,000. Goldman’s plan was for Jack Lemmon to be Butch, and Paul Newman Sundance. Producer Richard Zanuck preferred Steve McQueen for Butch, but that fell through, as well as a plan for Marlon Brando to play Butch, or for Newman to play Butch with Warren Beatty as Sundance. Producer Richard Zanuck hated the idea of Redford in a Western, denouncing him as a “Wall Street lawyer type.” The final perfect casting was greatly responsible for the film’s huge success, propelling Newman to the ranking of #1 box office star. The film was shot in Durango and Silverton, Colorado, St. George and Grafton, Utah, with Cuernavaca and Taxco, Mexico, standing in for South America.

Goldman had already worked with Newman on Harper and wrote, “Newman is the least starlike superstar I’ve ever worked with. He’s an educated man and a trained actor and he never wants more close-ups. What he wants is the best possible script and character he can have. And, he loves to be surrounded by the finest actors available, because he believes the better they are the better the picture’s apt to be, and the better he’ll come out. Many stars, maybe even most, don’t want that competition.”

Charles Hamblett quotes Paul Newman on the Butch experience: “Those were marvelous days. A glorious affectionate game one critic called it, and that’s what it was all through the shooting stages. I respect Robert Redford as an actor and value him as a friend. It was a perfect example of film making as a community experience. Nobody had to defend their position and everybody was geared to invent and create. Redford and I would fool around during rehearsals, needling George Roy Hill, the director, until he’d say, very anxious, ”Hey, you guys aren’t really going to play the scene that way? We’d look kinda dumb, until he’d roll the camera and then play the scene for all it was worth. Laughs all the way.” Paul looked thoughtful. “You know, I don’ think people realize what that picture was all about. It’s a love affair between two men. The girl in incidental.” (I think that’s pretty clear). 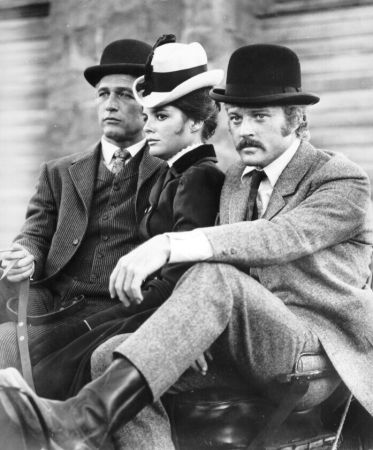 Newman, Ross and Redford. She was a girl of the moment, having just played Dustin Hoffman’s love in “The Graduate”. That and “Butch” were virtually her entire career.

Butch, Sundance and Etta Place were real people. Etta was either a schoolteacher or a prostitute, two jobs that you would not think easily confused. Goldman votes for the former: “There are numbers of photographs of prostitutes in the Old West. There are also some pictures of Etta. She looked like Jeanne Crain, and even the young whores then looked old. To me, she had to be a schoolteacher.” The three did have a NYC vacation in 1902, (complete with photos, Butch loved to have his picture taken) and ranched in Argentina for a spell, before taking up their six guns again. Etta came back home in 1907, and the Kid was killed by Bolivian troops two years later and Cassidy committed suicideor they escaped and died peacefully in the States in 1937.

The film characters of Butch and Sundance had their “roots in the rebellious sixties, in which a disgruntled younger generation made heroes out of social outcasts and even outlaws.” (Andreychuk). This was a huge part of the film’s appeal, and provoked skittish reviews by older critics. A fuddy-duddy reviewer like Henry Hart in Films in Review was stumped: “This film is so interesting cinematically one is carried away–from the fact that there’s a lot of anti-Establishmentarian glamorizing of criminals in it.”

Kim Newman writes, “Paul Newman’s Butch and Robert Redford’s Sundance are excused from their crimes by their sheer charm and prettiness. Incredibly popular at the time, Butch Cassidy now looks as if it simply could not bear to be The Wild Bunch.” Sam Peckinpah’s landmark western of the same year was bleak, not spoofy like Butch, and ended in a visceral bloodbath. Both films were prophetic in different ways, one permanently ratcheting up the acceptable violence level in films, and the other by setting the standard by which all other buddy movies are judged. Butch and Sundance are doomed romantics, destroyed by an impersonal force, as were many sixties heroes. Their fate intentionally mirrored that of the anti-Vietnam war protesters seen battling the police on the nightly news. Many films of this era, attacking the censors’ crumbling sex and violence taboos, now seem quite dated. This is not one of them.

Butch‘s lukewarm reviews depressed Goldman and Hill. Everyone involved with the film thought it was really good. Goldman mood lifted when a friend told him a story about waiting in line on a drizzly cold October day to buy tickets. “As the preceding show broke, a number of people piled out of the theater. And, one of them, a guy who’d just seen the movie, stopped and looked at the others waiting in the rain. Then, he cupped his hands and shouted out the following: “Hey–it’s really worth it.” And hey, when I heard that story, I thought for the first time that we really might have something after all”

Trivia question: Homage or Thievery? What incident in this film is identical to one in John Huston’s Treasure of the Sierra Madre? (Answer at the bottom of the page). 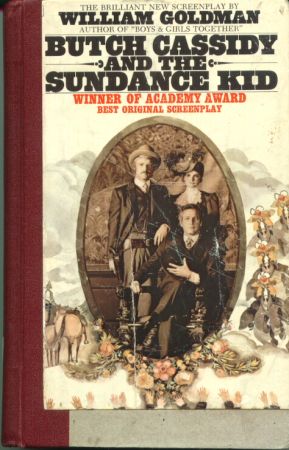 Few screenplays were published as mass-market paperbacks at the time, indicating the film’s wild popularity.

Photo from Jerry Ohlinger’s Movie Material Store. Book cover from the library. Sources include: Adventures in the Screen Trade by William Goldman, Paul Newman by Charles Hamblett, Wild West Movies: Or, How the West was found, won, lost, lied about, filmed and forgotten, by Kim Newman, The Golden Corral by Ed Andreychuk, Henry Hart’s review in the October, 1969 Films in Review.