Dr. Caligari exhibits a ghostly sleepwalker in a carnival, just as a series of terrifying murders erupt.  The stark Expressionism of the twisted alleys and jagged buildings haunt this pioneering horror film, both a world cinema landmark, and a menacing foreshadowing of World War II.  “The most famous and influential work of the German expressionist cinema…A one-of-a-kind masterpiece (Chicago Reader).

The Cabinet of Dr. Caligari is among the most famous silent films, because of its striking production design, horror tinged story, placement on many early “Best Of” cinema lists, and because it has long been in the public domain, available for screenings.  An example of the “gothic” “the potent blend of horror and romance with intent to thrill (Robinson 6) it rode a wave of similar works, including The Picture of Dorian Gray, Dracula, the short story, “The Monkey’s Paw” and The Phantom of the Opera, which, along with lesser known spooky titles, would find themselves filmed in the silent era.

Caligari’s plot blends elements of E. T. A. Hoffman’s tales and Edgar Allen Poe terror-strewn stories, tinged with folktales of medieval Prague.  But, a lightning bolt of modernism cuts through these ancient threads.  Cubism, Surrealism, Expressionism, Futurism and Constructionism had their roots in different European countries, “but they were also a part of an international assault on traditional artistic processes and styles…time-honored forms and conventions were attacked, ridiculed and ignored by modernist artists” (Budd13).  These were artistic responses to World War I’s political chaos. 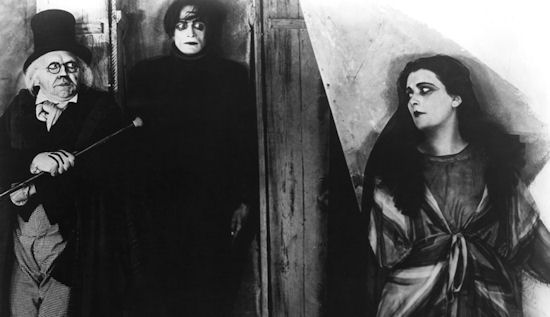 Script writers Carl Mayer and Hans Janowitz met in Berlin after the war.  They felt a kinship of revolutionary ideas, and that the new medium of the cinema would be a perfect form to express their views.  They subconsciously combined their revulsion over a government they hated for conscripting them into military service. They felt forced, like the sleepwalker Cesare, to commit atrocities.  Blended with a haunted memory of a fairground murder, they combined their own experiences with family madness in the script.  They were infuriated that the framing story superimposed on their plot reinstated the authoritarian power of the institution over their characters, feeling it completely negated their intentions.  Janowitz wrote, “Here was a filmed fable that had become the expression of the time, expressing all that for ten years had moved us, depressed and tortured us, even haunted us, in our nightmares!  That was the true expressionism of the Caligari picture!”(Budd 238). 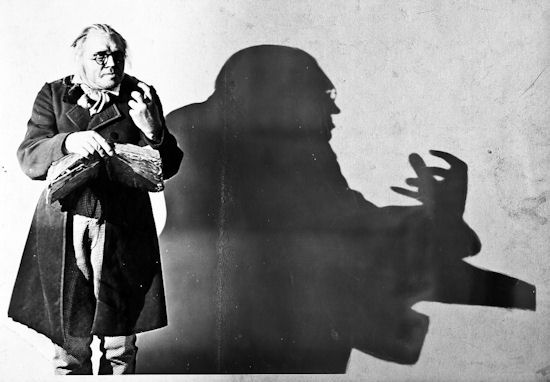 Producer Erich Pommer told an interviewer in 1959 that Mayer and Janowitz begged him to read what was their first movie script. They said the name Caligari emerged from a minor character in Stendhal’s Unknown Letters, and they had been inspired by Poe’s story “The System of Dr. Tarr and Prof. Feather.”  Pommer spent less than $200 on the script, thinking it a quickie horror story, but his art directors Hermann Warm, Walter Reimann and Walther Rohrig convinced him to invest $800 in the visually striking sets, telling him they would save electricity, since the lighting effects would be painted on.  The actors were paid approximately $30 day, bringing in the cost of the film at around $18,000—based on my source, in 1959 dollars, I presume.  Pommer marketed the film to its first great success, plastering Berlin with posters reading, “Du Must Caligari Werden!” You must become a Caligari. 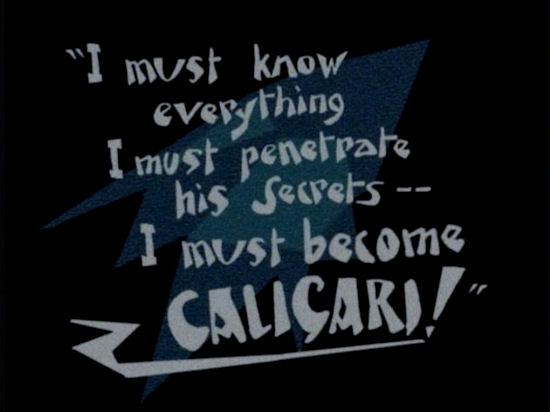 Expressionism , in Germany, encompassed all the arts; music, literature, theater, the fine arts and film.  Because of its clear links with this artistic movement, intellectuals watched the film with an interest perhaps they brought to no previous cinema.  “We must detach ourselves from nature, say the Expressionists, and strive to isolate an object’s most expressive expression…the Expressionist does not see, he has visions” (Barsacq 25).  Walter Reimann was painting in an Expressionist style before he began designing the film, and he and the other two designers came to believe that the production’s look should be as extreme as possible.  The sets were painted, but not realistically.  They were meant to evoke nightmares.  This stylization crept into the costumes, make up and acting;  Werner Krauss “by his jerky, broken gestures and his hopping walk, and (Veidt) by the slowness of his movements and his gliding somnambulist’s gait” (Barsacq 27). 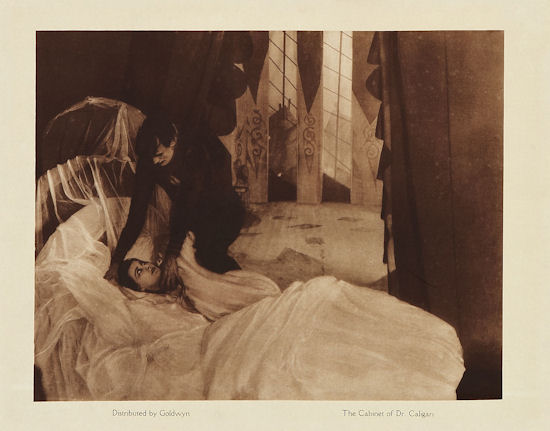 Pommer assigned Fritz Lang to direct the film, but he was in midst of filming his serial, The Spiders, and the distributors thought that film’s completion more pressing.  Pommer replaced him with Robert Wiene, who was comfortable with the macabre story, in part because his father, too, had descended into madness at the end of his life. He agreed with Lang on the final framing of the story, infuriating its authors.  Siegfried Kracauer in From Caligari to Hitler wrote, “Janowitz and Mayer knew why they raged against the framing story, it perverted, if not reversed their intrinsic intentions.  While the original story exposed the madness inherent in authority, Wiene’s  Caligari glorified authority and convicted its antagonist of madness.  A revolutionary film was thus turned into a conformist one—following the much-used pattern of declaring some normal but troublesome  individual insane and sending him to a lunatic asylum” (Budd 246).  But, his concerns were likely strictly commercial.  He felt that’s what the audience preferred to see. And, as David Robinson points out, the modern viewer, more accustomed to anti-authoritarianism, can easily imagine that the sly Caligari, knowing Franzis’ story is true, has put him in the asylum to discredit him (Robinson 40). 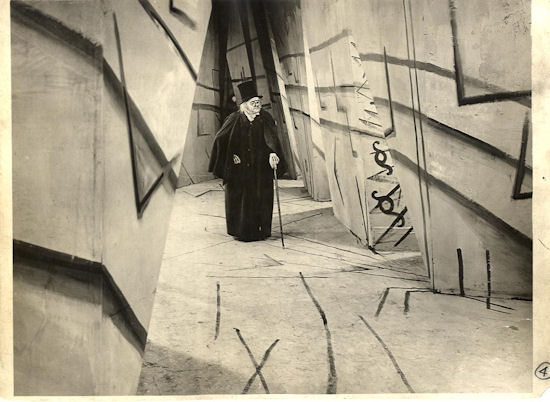 There has been a great deal of revisionist history surrounding this famous film.  Because director Weine died first, at the end of the 1930s, he was unable to defend his contributions, and he has been relegated somewhat to the background.  Some of the most famous writing, for example Siegfried Kracauer’s From Caligari to Hitler, have been more recently accused of twisting the film to fit the film theory.

Conrad Veidt had already made over thirty films before starring in the sensational Caligari.  He starred as Jaffar in the 1940 version of The Thief of Bagdad, and his performance is reproduced pretty accurately in the Disney Aladdin.  His most famous role is as Major Strasser in Casablanca ironically, he was one of cinema’s most famous fictional Nazis; but he had fled Hitler’s Germany with his wife in 1933.  His wife was Jewish, he was not, but on all official forms he described himself as a Jew, presumably in solidarity with her.  He devoted his life to fighting oppression. On screen he may have played villains, but he also made a silent film seeking to decriminalize abortion, one of the earliest films pleading for the understanding of gay men, and made films in Britain combatting anti-Semitism.  Casablana was his second last film, he died, on the golf course, only 50 years old.  (For more on Veidt’s career see The Man Who Laughs). 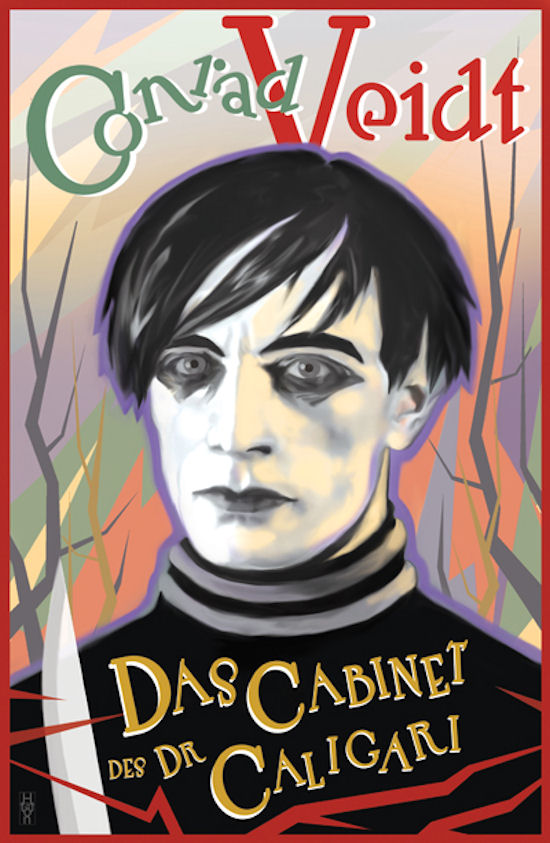 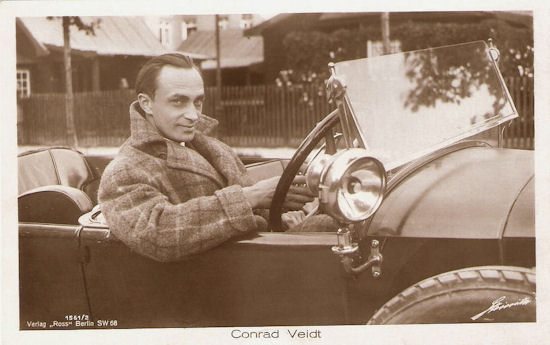 He co-starred with Lil Dagover, a member of Berlin’s Deutsches Theater and an actress who would make over 100 films, including some of Fritz Lang’s most popular silents.  She stayed in Germany during World War II. Her last film was in 1979, she died a year later, aged 92.  She remembered filming with Veidt, “ I still see how Veidt seems compelled to open the dead, black eyes; how the gleam fills the pupils, how the terror fills the eyes ate the bloodless lips speak the words, ‘Until dawn’” (Soister 13). 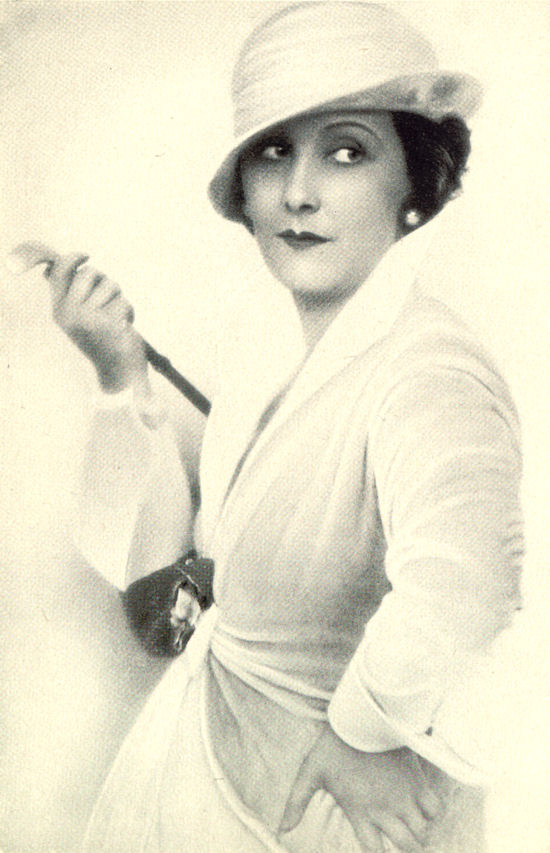 The camera work is rudimentary, and the lighting stark, but in spite of these shortcomings, Caligari was hugely influential, as each individual frame was a work of art.  It was in commercial circulation throughout the 1920s and 30s, and was an early acquisition of the Museum of Modern Art.  Caligari was the first film acquired by the Cinematheque Francais, and indeed, Henri Langois had one of the sets in his museum, as well.  I went to the old museum of the Cinematheque in 1985, before it closed.  This set rested unguarded, and I gingerly placed my toe on the slanting street…a religious experience for a movie lover. 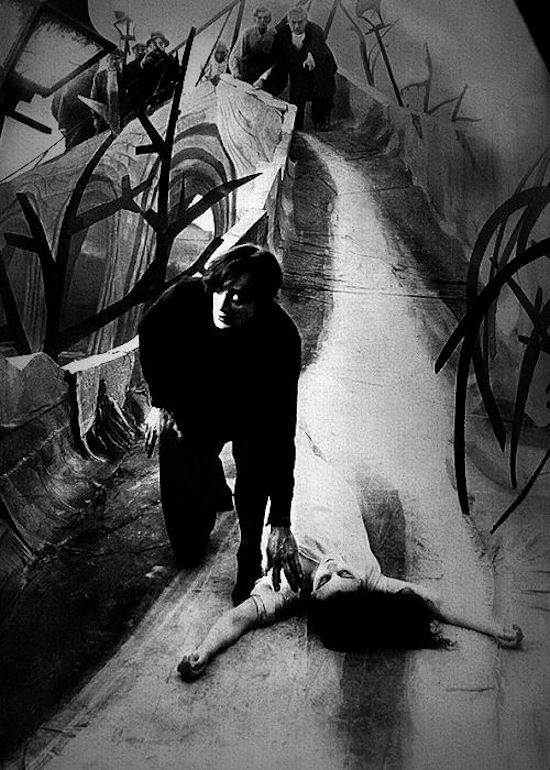 For its American premiere, Erno Rapee assembled a challenging score, a pastiche of Debussy, Strauss, Stravinsky, Schoenberg and Prokovieff.  Calgari’s theme was from Strauss’ Til Eulenspiegel, and the somnambulist, Cesare, a motif from Debussy’s “Afternoon of a Faun.”

Although it appears to be an avant garde film, it’s not like Un Chien Anadalou, or L’Age d’Or, with disjointed, hallucinatory scenes: Caligari tells a story. Although it was an art film, its horrific tale of murder and mayhem centered it in popular art, both making cinema palatable to the intelligentsia, and introducing popular audiences to a daring new visual form.  Throughout its history, it was a flash point both for art house cinema and cinema clubs, but its popularity made it a pioneer in revival houses, when it was typical for a film to come to the end of its run, and then be forgotten and replaced with the next new thing, Caligari played on.

Caligari was a huge success, and a prototype for horror films, but had no stylistic imitators.  “German cinema picked up on the picture’s underlying theme—man as puppet, torn between madness and subjugation—and dealt with it in a variety of ways time and time again for the next several years” but, according to Sigfried Kracauer “It stood out lonely, like a monolith” (Soister 99).

Early film historians felt this film a clear foreshadowing of Nazi Germany.  “Whether intentionally or not, Caligari exposes the soul wavering between tyranny and chaos, and facing a desperate situation: any escape from tyranny seems to throw it into a state of utter confusion.  Quite logically, the film spreads an all-pervading atmosphere of horror.  Like the Nazi world, that of Caligari overflows with sinister portents, acts of terror and outbursts of panic.  The equation of horror and hopelessness comes to a climax in the final episode, which can only pretend to re-establish normal life (Atkinson 23). 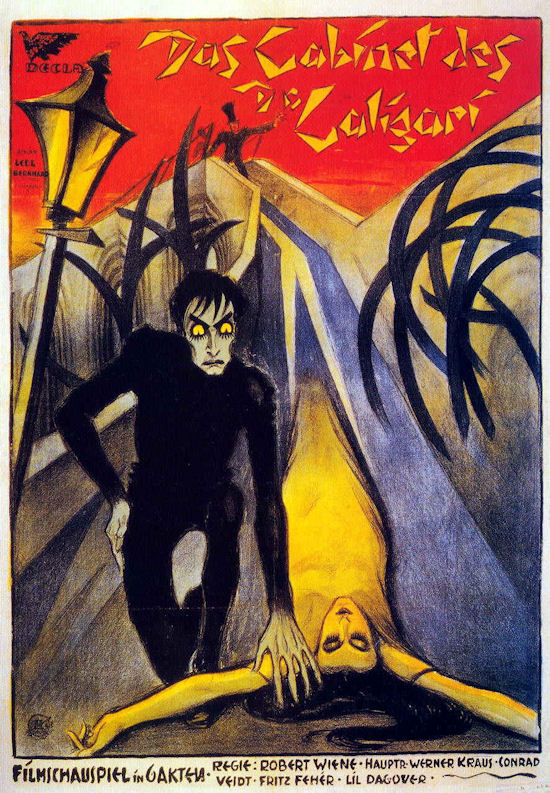