The Grandpappy of haunted house movies invites pert LaPlante to the old manse for the midnight reading of a will…can she survive the night?  Based on a stage play that mixed laughs and thrills, Expressionist Leni, newly arrived from Germany, inaugurates Universal Studio’s brand as the studio of horrors. “It’s the cat’s meow” (Entertainment Weekly). Silent with live music by David Drazin. Preserved by The Museum of Modern Art with support from the National Endowment for the Arts and The Film Foundation.

Horror comedies are an American tradition. After all they date back to 1820’s The Legend of Sleepy Hollow, by Washington Irving. There were a few laughs and thrills plays in the early 20th century, like The Ghost Breaker, The Gorilla and The Bat, but the most popular one debuted in 1922, with all the elements of the Old Dark House mystery in place, the fortune, the heir, the will, and the evil forces conspiring against the heroine.  The Cat and the Canary was written by John Willard, and after The Bat became a hit film, and short haunted house comedies by Buster Keaton, Harold Lloyd and others became popular, studio head Carl Laemmle sought to expand on Universal’s horror brand, begun by Lon Chaney’s Hunchback of Notre Dame and Phantom of the Opera. The Cat and the Canary was still playing on Broadway 5 years after its debut, and Willard hesitated to sell his play to the movies, afraid that once the surprise ending was given away, nobody would ever see his play again.  Laemmle convinced him that it would only increase the play’s fame…which is of course, completely true.  If it wasn’t for this film version, and the later one with Bob Hope, this play would have completely faded into the mists of time.

Laemmle was taken by the atmospheric film Waxworks, directed by Paul Leni in Germany, with a screenplay by Henrik Galeen, who had written Nosferatu.  This film, which told the tales of Ivan the Terrible, Harun al Rashid and Jack the Ripper in suitably lurid fashion brought Leni international fame.  Carl Laemele, who liked having fellow Germans working at his studio, invited him to Hollywood in 1927, and he gladly accepted. One of the things that Laemmle loved about Waxworks was the way Leni threaded humor through the horrors of some of history’s great criminals. He hoped that with Leni’s penchant for the Gothic, and his Expressionist design credentials, he could provide a hit for the studio. 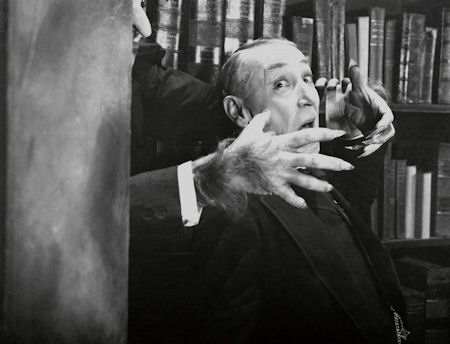 Paul Leni was born in Germany and worded as an avant-garde painter before joining Max Reinhardt’s celebrated theater group as a stage designer.  Starting in 1916 he went from art direction to film direction in a series of expressionistic films, most notably Waxworks.  Leni also designed the sets for The Cat and the Canary, collaborating with Charles D. Hall, who would design the sets for both Frankenstein and Dracula.  Laemmele and Leni wanted to explore the Expressionistic style with its “distorted sets, stylized performances, sexy dream sequences, relentlessly mobile cameras, dramatic spotlights and staccato editing” (Viera 18). Although Leni died tragically of blood poisoning from an ulcerated tooth in 1929 at the age of 44, his influence is felt in all the great Universal horrors, Frankenstein, Dracula, The Mummy, The Black Cat and The Werewolf of London, all founding monsters of Hollywood.  He made a few other films, including the incredibly creepy The Man Who Laughs with Conrad Veidt. He inaugurated a new genre with The Cat and the Canary, and many of his innovations, the clutching hands, sliding panels and cobwebby sets have been imitated in the countless haunted house horror comedies succeeding this one.

His cinematographer, Gilbert Warrenton, admired Leni’s mobile camera, “If one can squeeze through knot holes, hang by his feet from the ceiling, stand on his head on a moving platform and fly, one can follow Leni with ease and grace” (Viera 19).  The New York Times film critic agreed, “Mr Leni has not lost a single chance in this new film to show what can be done with the camera.  He creates excitement by pitching his camera high and low, or rolling it along.  He makes you feel that you are one of the characters in the haunted house of the story” (ibid.).  As Leni himself said, “I have tried to create sets so stylized that they evince no reality.  It is not extreme reality that the camera perceives, but the reality of the inner event, which is more profound, effective and moving than what we see through everyday eyes” (Viera 22).

Laura La Plante was Universal’s #1 female star from 1924 to 1930, at her peak she was making $5000 a week.  Most of her films were comedies, in which she often played young married women coping with domestic life of the roaring 20s.  She was born in St. Louis, MO in 1904.  Her family was poor, and her parents divorced when she was 8 years old.  Her mother took her and her sister to California.  A cousin lived a block away from the Christie comedy studios, and one summer vacation, her cousin took her to the studio to find a job.  She had no particular interest in acting, but needed to contribute to the family’s finances.  Soon, she was working steadily in small parts, eventually ending up at Universal as cowboy star Hoot Gibson’s leading lady.  Her comedy parts, especially opposite Reginald Denny, were extremely popular. 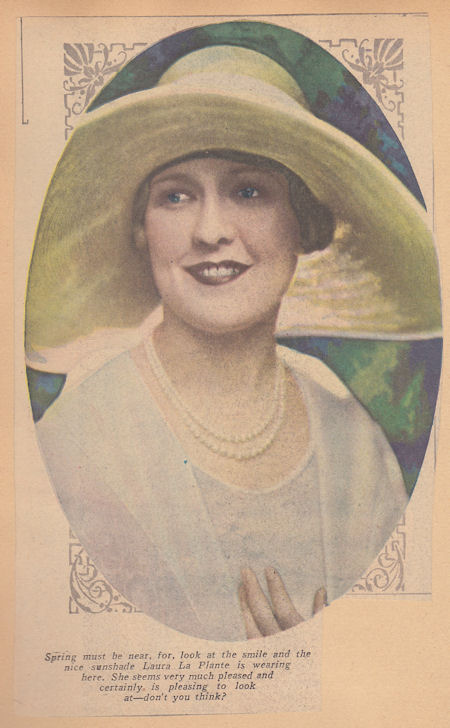 In 1985 she said in an interview, “I did a mystery, The Cat and the Canary, in 1927.  It was directed by Paul Leni.  I remember Mr. Leni as being kind of a short man, and he had a strong German accent.  I thought he was remarkable in that he was working in a language that he didn’t know, and he seemed to be barging ahead without any worry about that.  He just did the best he could, you know.  I kind of watched him from the sidelines.  Although he had such trouble with the language, I don’t know how to put it into words, he had a way of getting your ear and giving you directions that could be followed with some ease” (Drew 99).  As you can see, Miss La Plante took a rather casual attitude towards her acting, at least in her reminiscences.  She was uneasy with the advent of talkies, and while she made a few talking pictures, including originating the role on screen of Magnolia in Show Boat, she decided to retire to England with her husband, who was in charge of the Warner Brothers Studio there.  Although she made a few more films during her career, essentially, when she walked out on her Universal contract in 1930, she retired from the screen at the age of 26.

When writers speak of the late silent era as being the epitome of motion picture art, they are speaking of films like The Cat and the Canary.  The story isn’t much, but Leni’s expressive camera is almost a character in itself.  No less than the New York Times praised it “as one of the finest examples of motion picture art” (Kobel 252). 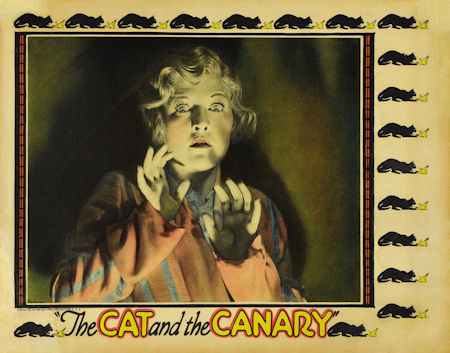