The Bright Young Things are having a scavenger hunt, and they scrounge up, not a Forgotten Man, as Carole Lombard would in My Man Godfrey, but a faithful husband and a beautiful young virgin. The meeting is fateful, of course, and soon Sir Christopher Strong, a Member of Parliament on the edge of a midlife crisis, will be unable to resist the reckless allure of Lady Cynthia Darrington.

Lady Cynthia is an aviatrix, a daring record-breaker with the “instincts of a pioneer,” her character inspired both by the American Amelia Earhart and British Amy Johnson. The novel by Gilbert Frankau on which Zoe Adkins based her script was about a race car driver, not a pilot. And, for all the lip service paid to feminist daring, the film is still about a woman loving, waiting, suffering, sacrificing. In the afterglow of Cynthia’s yielding her virtue, a vignette of her arm lingers before the lamp on the bedside table and says of her lover’s gift, “I love my beautiful bracelet. And I’ve never cared a button for jewels before. Now I’m shackled.” In the next instant, Sir Christopher asks her to give up flying, she languidly consents and turns off the light.

Director Dorothy Arzner and outspoken Katharine Hepburn seemed to be promising collaborators, but their experience on Christopher Strong was not a happy one. Although Hepburn’s own recollection (for the record) in Me was, “She wore pants. So did I. We had a good time working together” Anne Edwards describes “a mutual respect (cold, distant and competitive though it was).” This was only Hepburn’s second film after her debut opposite John Barrymore in A Bill of Divorcement, yet she was already being compared with Garbo.

Colin Clive plays the title role. He’d became famous in the stage and film versions of Journey’s End, a harrowing WWI drama directed by James Whale, but is, of course immortalized as Dr. Henry Frankenstein in Whale’s Frankenstein and Bride of Frankenstein. His “neurotic charisma” seems an odd choice to ensnare the determined Lady Cynthia and her attraction to a weakling (let’s face it) mystifying. Billie Burke, as Sir Christopher’s wife, plays an understated scene with Hepburn in which she indicates she knows about her husband’s infidelity. Here is the most intensely felt emotion in the film, displaying Arzner’s characteristic sensitivity to female rivalries and friendships. 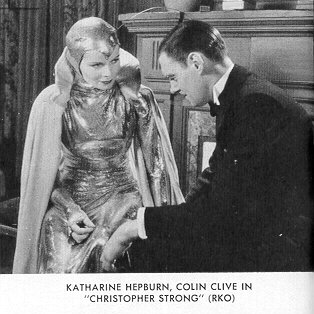 Dorothy Arzner was the only female director in Hollywood to make the transition from silent to sound pictures. In the free-wheeling silent era there were numerous women directors. The studio system only became institutionalized when men realized that there was a lot of money to be made in the movies. These studios were ruled autocratically by men with strong egos and strong opinions. Arzner was tolerated and condescended to as a “woman director” and a “woman’s director” as long as her pictures were profitable and no longer. The 17 features she made between 1927 and 1943 were rediscovered and honored by a generation of 1970s feminists hungry for role models in the “classical Hollywood cinema” era. But Arzner was both a product of her time and a woman existing cautiously in a man’s world. If only her movies had a genuine auteur stamp!

Arzner was born January 3, 1900 and grew up in Los Angeles, where her father ran a café popular with movie people. She convinced William C. de Mille to hire her as a typist (after she decided medical school was not for her) as an entrée into the film business. She was an incompetent typist, but a gifted editor. She cut Valentino’s Blood and Sand (and may have directed some of the bullfighting sequences) and several films for James Cruze, including the sprawling epic, The Covered Wagon, a film much admired for its sweeping vistas and historical accuracy. But, Arzner wanted to direct, and would not be sidetracked into the scenario department as were other ambitious women in the film business by the late twenties. “The greater part of the motion-picture audience is feminine. Box-office appeal is thought of largely in terms of women lined up at the ticket window. If there are no women directors, there ought to be,” she said.

Arzner accepted an offer to direct at Columbia, but Paramount was loath to lose her and allowed her direct Fashions for Women in 1927 starring Esther Ralston. She directed Clara Bow’s first sound film, The Wild Party, featuring Frederic March as a dishy college professor. Bow had terrible mike fright, and Arzner devised the first boom, attaching a microphone to a fishpole to track Bow as she moved around the set. Pear-shaped tones were much admired at the dawn of the talkies, but Arzner showed how Bow’s Brooklyn accent suited her vivaciousness. Arzner made several successful films at Paramount, but decided to free-lance as a director rather than take a Depression-related pay-cut the studio was asking of all its employees. At RKO, she directed Katharine Hepburn in her second starring film, Christopher Strong.

Howard Greer designed Hepburn’s remarkable wardrobe; masculine flying togs and a sheer evening gown covered in fluttering petals in which she acknowledges her love. Walter Plunkett designed the clinging silver moth costume, complete with curling antennae. Plunkett said, “The difficulty was that all these little metal squares had little prongs on the back of them holding them together. It was all fine for fitting and everything until she (Hepburn) got on the set and spent a few hours in it and discovered these little prongs were scratching and irritating her body. So I got in a crew and put in a lining of very, very thin chiffon velvet throughout the thing to keep it from digging into her.” This fancy dress costume is symbolic of the airplane in which Lady Cynthia hopes to break the altitude record, named the Silver Moth. Dressed in her shimmering gown, she holds a match for the infatuated Sir Christopher. Is he the moth to her flame, or she to his?

(Photo from Daniel Blum’s A Pictorial History of the Talkies, 1958).