A film director returns to the village where his childhood was illuminated by the movies and the man who projected them. Winner of the Best Foreign Language Film Oscar. “There are films as lovely, but none lovelier than Cinema Paradiso, a folkloric salute to the medium itself, flickering with yesterday’s innocence and lingering on the mind like bubbles in wine” (Washington Post).

When I was in Italy last summer, we stayed in a little village on the Amalfi coast called Minori, because I could rent an apartment there through airbnb.com.   I was delighted to discover that there was an outdoor summer movie series, and one night that we were in residence, the town would be screening Men in Black 3, with Will Smith, Josh Brolin and Tommy Lee Jones, dubbed into Italian.  The seats were arranged in a school courtyard, and there was one 35mm projector.  Half the film was spliced onto one reel, and the other half onto a second, so there was a reel change intermission, during which the entire audience leaped up and ran to the concession stand.  It was just like Cinema Paradiso!  And, I learned an important lesson about global film distribution.  Although I speak little Italian, I could understand everything that went on in the film.  True, I didn’t get all of Will Smith’s Italian wisecracks, but one could get the drift.  When we watched it later in English, we could confirm that nothing important was lost without translation.  That’s why the modern Hollywood blockbuster has so little dialogue and so many explosions. 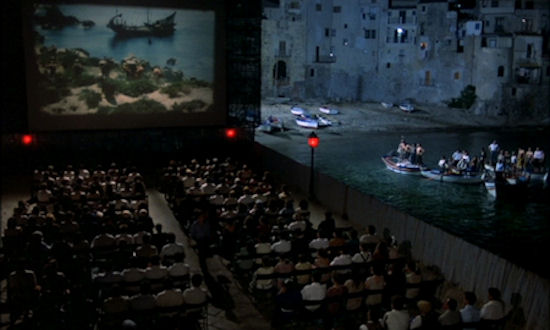 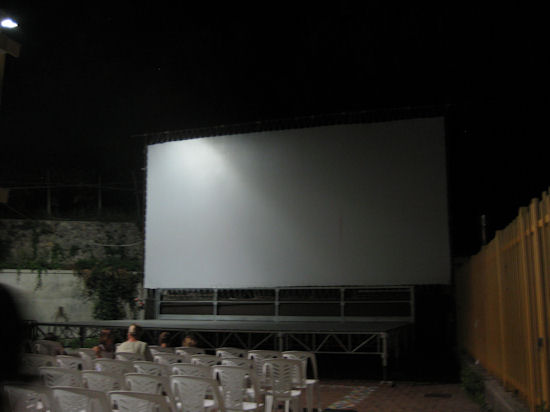 But now, rewatching  Cinema Paradiso, another reflection forcefully presents itself.   As many of you may know, we are at the end of the era of celluloid.  The physicality of the film is such an important part of this movie,  the cutting and splicing, the sound of the projector, the image of film on a screen.  Studios don’t want the expense of printing and shipping film anymore, and theaters are being forced to convert to digital at a rapid rate.  We will show film as long as someone will ship it to us, because I love the velvety depth of the film image, and the action of changing from one reel to the next. And, once again and never too often, I’d like to praise our fantastic projectionists, Doug Vuncannon and Kevin Porter, without whom these screenings would not happen.  It’s cheaper for studios to send a download, but what will happen to the future of film preservation is another question, that can be pondered by anyone with a laserdisc player, or a VCR.  Cinema Paradiso now seems nostalgic, not just for an idyllic childhood, but for the medium of film, itself.  Cinema is a guide to an alternate personal history, not just family, friends, home town, but a history of an individual’s imagination. 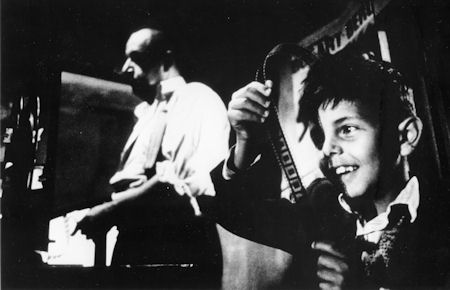 The film was shot in director Giuseppe Tornatore’s own hometown, Bagheria, Sicily. He was born in 1956, and began both staging plays and shooting 8mm film when he was a teenager.  He worked for Italian television beginning in the 1970s and shot documentaries, including the award winning Ethnic Minorities in Sicily.  Cinema Paradiso had a lukewarm response in a version that was 40 minutes longer than the shorter “International Cut” which won global acclaim and a Best Foreign Film Oscar. The longer version contained a lengthy episode centered on what happened to Toto’s teenaged crush.   In the 1990s, Tornatore dedicated himself to preservation of classic Italian films, including La Terra Trema (seen in clips in Cinema Paradiso) and Vittorio de Sica’s Shoeshine. He has continued making films, but none have achieved the success of this one.

Cinema Paradiso was originally panned by Italian reviewers as “cinema di papa” (that tugs at the heartstrings)  (Marcus 199) but, particularly after its international success, was celebrated as part of a new wave of Italian cinema, replacing the alienation of the previous generation of filmmakers  who eschewed sentiment.  The yearning for an embracing community dominates, here exemplified by the imaginary small town of Giancaldo, Sicily.  Alfredo, the venerable projectionist is a father figure, but he also represents the nurturing embrace of the movies.  On screen, both the audience in the imaginary theater, and on our theater watching the film, enjoys clips from Hollywood’s Golden Age and European classics, as well as an international pantheon of beloved movie stars, and Italian favorites like Alida Valli and the comedian Toto, who shares a name with our hero. Part of coming of age is realizing that “Life isn’t like the movies, it’s much harder.” Yet his youth, the strong community of his provincial town and his lost love all dovetail with the inescapable perfection of the movies. “The film attributes to cinema a powerful role as surrogate for family, superior to the dreary, even hostile, nature of family life.  Cinema becomes a bonding agent for the community, a relief from the drudgery of work, and finally, an index to the changing nature of social life in Sicily” (Landry 364).

Jess Walters, in Beautiful Ruins, states the power of the movies beautifully, “Weren’t movies his generation’s faith anyway–its true religion? Wasn’t the theater our temple, the one place we enter separately but emerge from two hours later together, with the same experience, same guided emotions, same moral? A million schools taught ten million curricula, a million churches featured ten thousand texts with a billion sermons–but the same movie showed in every mall in the country. And we all saw it! That summer, the one you’ll never forget, every movie house beamed the same set of thematic and narrative images–the same Avatar, same Harry Potter, same Fast and the Furious, flickering pictures stitched in our minds that replaced our own memories, archetypal stories that became our shared history, that taught us what to expect from life, that defined our values. What was that but a religion?”

Tornatore’s film  transcended national boundaries because of the global malaise mourning the increasing commodification of culture, and the splintering of traditional communities.  Toto’s sterile life in Rome, its cool surfaces and silences (even the woman in his bed is asleep) contrasts with the scrappy existence of his childhood, a nostalgia common to many people in many countries, which connects vividly to any filmgoing audience, as they mourn the inevitable changes in the entertainment beloved in their formative years. Film is now a medium now in flux towards an uncertain future.

Unfortunately, my timing for screening this film is painfully perfect, as Cary’s Galaxy Cinema was bulldozed this week.  I have never felt an affection for any theater like I did with the Galaxy, not because it was central to my childhood, but to my daughter’s.  The Galaxy is where we learned to share a love for Bollywood films, a special bond for us.  The tears we once shed for the romantic films of Shah Rukh Khan, we now shed for his spiritual home, our own Cinema Paradiso. 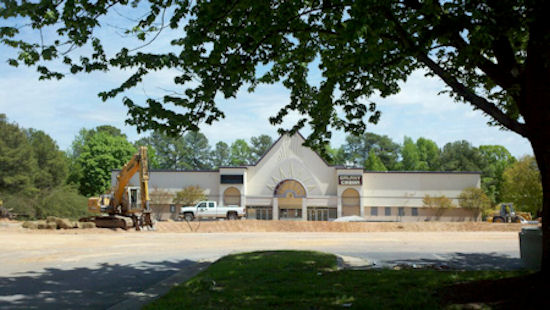 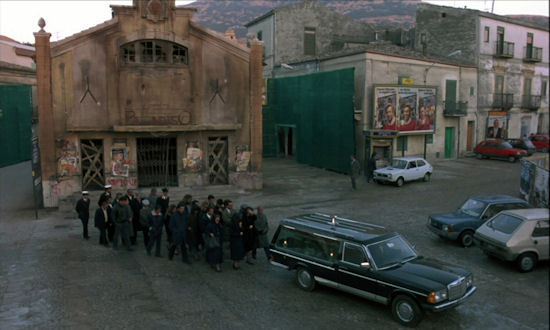