Welles, a 26-year-old “Boy Wonder” stormed cinema with a Shakespearian expose of a power-mad media mogul’s rise and fall.  His daring subject, splintered timeline and bold visuals sent a shock wave through Hollywood, which never quite forgave him for being a genius. 100% positive on Rotten Tomatoes. “Citizen Kane still feels fresh and contemporary…it shows Welles to be a master of genre, it’s a newspaper comedy, a domestic melodrama, a gothic romance and a historical epic” (A. O. Scott, NY Times).

Citizen Kane lost its Sight and Sound Poll ranking as the greatest movie ever made to Vertigo in 2012.   But, it’s hard for someone like me to cede its preeminent status to any other film.  It remains, as Borges described it, a labyrinth without a center (Gottesman 128). The film’s structure leads you to believe that somewhere within the public record and memories of the characters, a solution to the mystery will be found, as is reliably the case in Hollywood films.  Decoding comes within only the last few seconds of the film, encouraging viewers to see it again and again to unravel all the narrative strands.

The stylistic and narrative innovations of a young iconoclast have “become the symbol for every sensitive young man alienated from his environment and dreaming about movies.” (James Naremore). “Citizen Kane is like watching a consummate artist grappling for the first time with the intoxication of his found vocation.  All his passions, theater, magic, circus, radio, painting, literature suddenly fused into one.” (Peter Bogdanovich). But, entangled with this legend is that of a visionary artist defiled by the Hollywood studio system, or as Laura Mulvey said about RKO studio head George Schaefer’s hiring of the young director, “putting the cat of genius among the pigeons of the entertainment industry” (Mulvey 10). Credit for the film belongs partly to Schaefer, who gave the young director carte blanche to begin with, and as the process progressed, defended him, and gave him what he wanted and needed (pretty much) to make his masterwork. 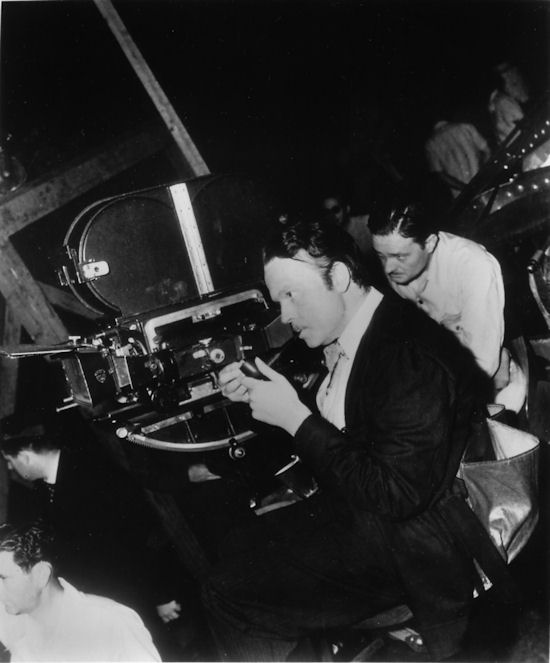 Welles cajoled Ireland’s Abbey Theater into giving him an audition at the tender age of 15, and his lush voice soon catapulted him into a lucrative radio career in NYC, where he made $1500 a week in a myriad of radio programs before anyone even knew his name.  He put his salary into the Federal Theater Project; FDR told him he was the only person ever to have siphoned money illegally INTO a government program.  After his Mercury Theater Company convinced radio listeners that New Jersey was being invaded by Martians, Hollywood threw open the gates.

He collaborated on a screenplay with Hollywood veteran Herman J. Manckiewicz, who had been an intimate at San Simeon, the palatial home of William Randolph Hearst.  Hearst lived there with his mistress, Marian Davies, a talented silent film comedienne who was devoted to him.  Manckiewicz’s alcoholism had resulted in his banishment from San Simeon.  “Nursing his resentment, had subsequently become obsessed by both Hearst and Davies, collecting stories about them the way small boys collect stamps (Callow 484). Welles had been looking for an expansive theme, which would combine a change to ponder American history with a showcase role for him.  Some of the parallels with Hearst are close (his role in the Spanish-American War, for example) and others are not. They collaborated closely, and was deeply wounded when, later in life, his authorship in Kane was questioned by John Houseman and Pauline Kael, among others.  The process of filming Citizen Kane constantly evolved.  “Under legal and financial and creative pressure it had changed and changed and changed. All was compromise: adaptation, alteration, condensation; trimming, sharpening, honing” (Callow 505).  Film is an intensely collaborative art. The Oscar he shared for the script was the only one he ever won. 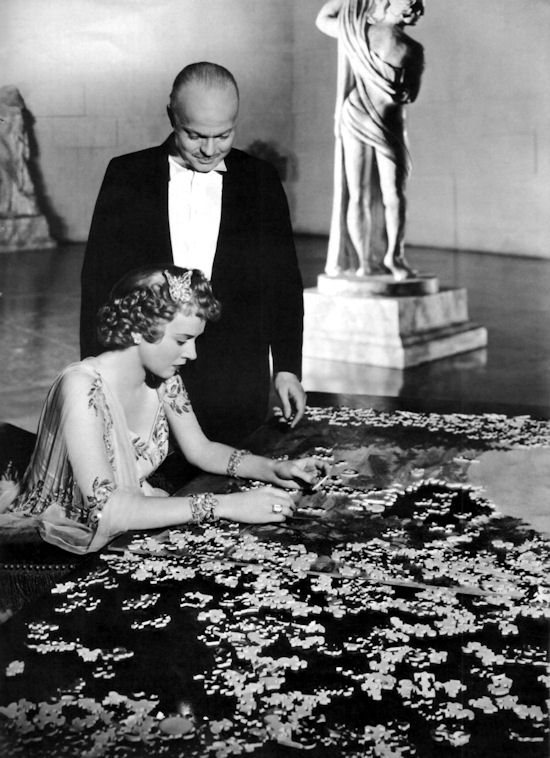 He always impishly maintained that Kane reflected Robert McCormick’s life, not William Randolph Hearst’s, but the collecting mania was Hearst’s and “Rosebud” was allegedly a private joke whose use infuriated Hearst.  “The Hearst-Kane parallels in various versions of the script…create a psychological portrait of Hearst, and they send what film historians call a ‘contraband message’ to audiences, a cinematic diatribe against Hearst’s yellow journalism and his embrace of capitalism, isolationism and fascism.” (Pizzitola)

Delighted with the resources at his command, Welles called RKO studios, “the biggest electric train set a boy ever had,” but he also said, “If they ever let me do a second picture, I’m lucky.”

Photographer Gregg Toland asked to work on Citizen Kane: he wanted to shoot a film with someone who had never directed one.  He let Welles think the director always set the lighting and was infuriated when Welles was tipped off that Toland had been quietly coming in behind him and fixing things so as many of his radical ideas as possible would work.  “That’s the only way to learn anything,” Toland told him, “from someone who doesn’t know anything…There’s no mystery to it, you can be a cameraman, too.  In a couple of days, I can teach you everything that matters.” 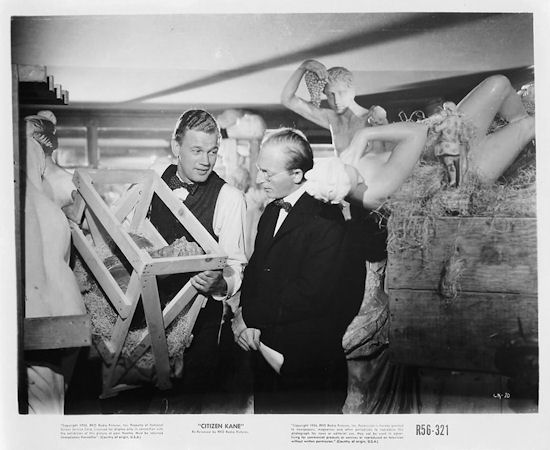 They wanted the film to look as real as possible.  “The finished result seems to us, no, the opposite of real.  It seems stylized in the extreme” (Callow 501).  The tension between the objective and subjective creates a fascinating tension on screen.  Toland’s generous tutoring influenced Welles’ entire film career, and the credits of Citizen Kane reflect his gratitude.  But, it wasn’t just the visuals that were revolutionary.  Welles was a radio guy, and he understood sound in a different way than others in Hollywood, it could be ambient or demanding, it could overlap, or there could be silence.  Editor Robert Wise said, “He overwhelmed me with his radio background and his masterful use of sound, stretching the boundaries of how I thought sound could be used” (Callow 524).

Welles is in every respect the creator of Charles Foster Kane, and plays him from youth to old age.  He told Bogdanovich in This is Orson Welles, “I was just as heavily made up as a young man as I was as an old man.  I read once–Norman Mailer wrote something or other–that when I was young, I was the most beautiful man anybody had ever seen.  Yes! Made up for Citizen Kane! And for only 5 days!” (Callow 506). 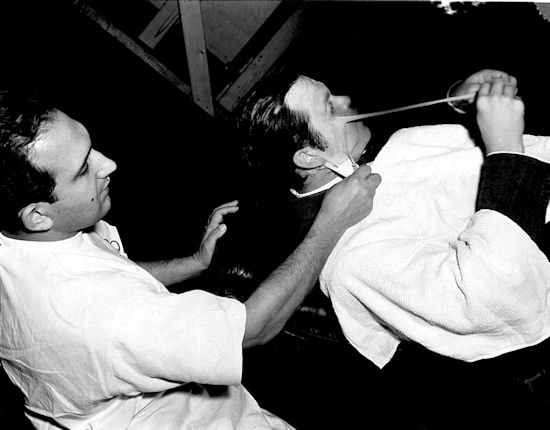 The film enraged William Randolph Hearst, who tried to have it banned (no such thing as bad publicity—he of all people should have known that). Does a public figure have the rights to fictional treatment of their own life? In this Kardashian-drenched era, fewer and fewer people seem to care.  The Hearst press refused to run ads, and RKO was intimidated enough to delay the release, and then booking it into less prestigious theaters than they had originally planned.  The critics loved it, but the public stayed away, and the lingering threat of a Hearst lawsuit impeded wide distribution.

RKO hid it in the vaults by 1942, after showing a loss of $150,000.  After 1950, screenings evaporated.  The film was not shown in Paris until 1946, but then Andre Bazin of Cahiers du Cinema began to champion it.  Francois Truffaut wrote, “To shoot Citizen Kane at twenty five years of age, is this not the dream of all the young habitues of the cinematheques?” (Carringer 118). “We loved this film because it was complete: psychological, social, poetic, dramatic, comic, baroque, strict and demanding.  It is a demonstration of the force of power, and an attack on the force of power, it is a hymn to youth, and a meditation on old age, it is an essay on the vanity of all material ambition and at the same time a poem on old age and the solitude of exceptional human beings, genius or monster or monstrous genius (Gottesman 130). In the late fifties, the film became a staple of college repertory film series, at the same time RKO sold its film library to television.  Pauline Kael wrote about the film at a Berkeley screening, and Peter Bogdanovich’s program notes for a MoMA showing in 1961 was a major force in creating its reputation as a classic.  As the decades passed by, the reputation of Citizen Kane remains stellar.  Martin Scorsese said, “The one key element we learned from Welles was the power of ambition.  In a sense, he is responsible for inspiring more people to be film directors than anyone else in the history of the cinema” (Leaming 200) 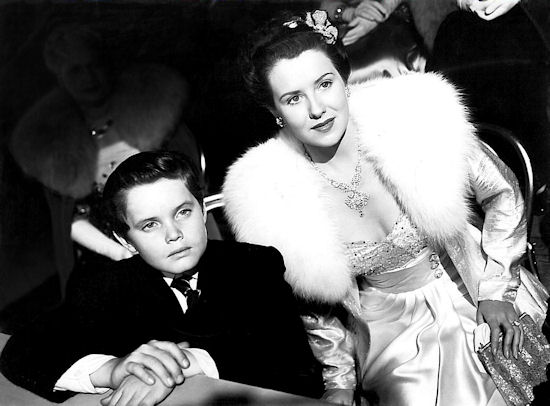 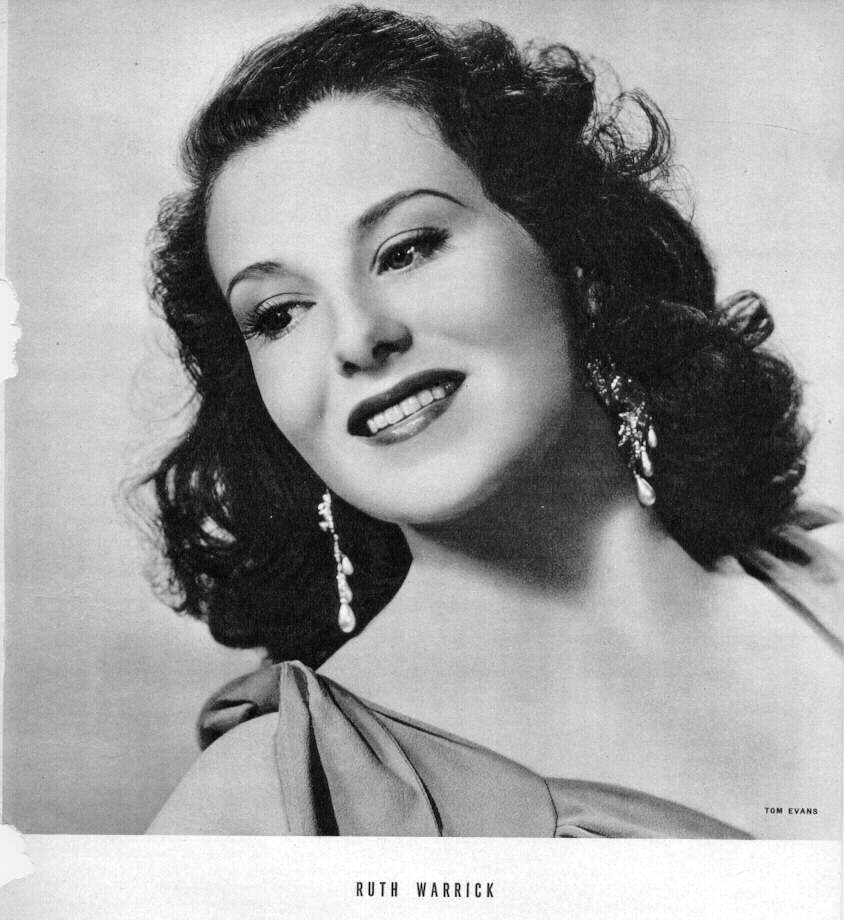 Photo from anonymous Movie Star Scrapbook, c. 1941. Caption reads: “Orson Welles’ discoveries have a way of going places, and St. Louis Mo.’s Ruth Warrick’s no exception. Neighboring Kansas City liked the looks of the 5’6” 120-lb. blue-eyed kid, elected her “Miss Jubilesta” and god-sped her off to N.Y. There she debuted on the City Hall steps with an armful of turkeys for Mayor La Guardia. So nifty a job did she do of this and soap-opry-ing on the radio, it wasn’t long before she was exposed to the great Mr. Welles and shot upwards in the world in “Citizen Kane” and currently in United Artists’ “The Corsican Brothers.” Radio proved her forte romantically, too ’cause it was there she met Eric Rolf, her hubby and papa to 9-month old Karen Elizabeth. She can coax music out of a piano and violin like a one-man band. Reads constantly and has something of a literary bug, harking back to a $5 prize for a “Prevention and Cure of Tuberculosis” thesis in high school. Hates bridge and dieting. And it’s no wonder, what with a figger like hers and angel food al la Warrick around the house!”

“I found myself alone with him (Hearst) in an elevator in the Fairmont Hotel on the night Kane opened in San Francisco.  He and my father had been chums, so I introduced myself and asked him if he’d like to come to the opening of the picture.  He didn’t answer.  As he was getting off at his floor, I said, “Charles Foster Kane would have accepted!”–Orson Welles. 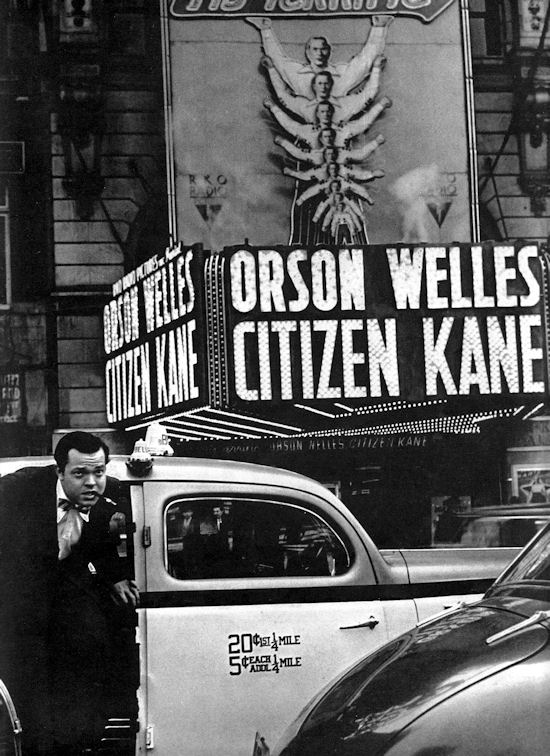 If you would like to hear me on the radio discussing Citizen Kane with Frank Stasio and Marsha Gordon on WUNC radio’s “The State of Things” listen here:

Sources include:  Citizen Kane: A BFI Film Classic Guide by Laura Mulvey, Orson Welles: A Biography by Barbara Leaming, Orson Welles: The Road to Xanadu by Simon Callow, The Making of Citizen Kane, by Robert L. Carringer, Focus on Citizen Kane edited by Ronald Gottesman, This is Orson Welles by Peter Bogdanovich, Louis Pizzitola’s chapter on Citizen Kane in Hearst Over Hollywood: Power, Passion and Propaganda in the Movies has a fresh point of view. Check out the great website at www.hearstoverhollywood.com.