Chaplin was the first international media celebrity, touching hearts and funny bones world wide. In his masterpiece, voted #1 on AFI’s list of great romantic comedies, the Little Tramp falls in love with a blind flower seller, whose poignant gesture clearly inspired the creators of the 2008 hit Wall*E.

In City Lights, Charles Chaplin plays the Little Tramp, a character who entranced a wide audience, from famous writers and British royalty to the most humble movie-going public. Chaplin’s comedies are funny and wildly inventive, but at the same time do not flinch from portraying the down and out world that the youthful comedian had known too well. Francois Truffaut notes, “In his chase films for Keystone, Chaplin runs faster and farther than his music-hall colleagues because, if he is not the only filmmaker to have described hunger, he is the only one who knew it at first hand. This is what his audiences all over the world felt when his films began to be circulated in 1914.”

Chaplin was born in London, England, April 16, 1889. His childhood was miserably unhappy. Although his mother, Hannah, an unsuccessful music hall performer, was briefly married to and then deserted by a man named Charles Chaplin, Sr., it’s unclear whether he was in fact Charlie Chaplin’s father. Hannah was pregnant with another man’s child, Charlie’s older brother Sydney, when she married him. Plagued by mental illness that became increasingly debilitating, she often abandoned her children to the schools and workhouses that served the poor during her institutionalization. Charlie and Sydney’s nomadic life, spotty schooling and the pressure of dealing with an unstable parent were to cause lasting psychological scars. Chaplin endlessly mythologized his childhood, particularly his mother, making the biographers’ task a difficult one. Yet, when he was a rich movie star, he only reluctantly brought her to live near him and rarely visited her. Visits were so depressing that he found himself unable to return to work afterwards, surely haunted by the fear that he, too, might become insane. The shabby streets of Lambeth, the London neighborhood where Chaplin and his brother grew up, eventually were razed. Ironically, they now are home to, among other things, the former Museum of the Moving Image (now closed) where Chaplin’s Little Tramp costume used to reside as a precious artifact behind glass.

Chaplin’s mother was an inspired mimic and fostered in her son the ability to observe and imitate, a skill that would serve him well. At a young age, little Charlie began performing on street corners, and later toured Britain in stock companies and eventually as one of the star knockabout comedians in Fred Karno’s music hall troupe. Karno brought his company to the U.S. for a tour in 1913 and Chaplin was singled out and hired to be a supporting comedian at the premiere slapstick movie studio, Keystone. Chaplin may have been hired because of his rough-house comedy skills, but he soon realized that cinema offered him a chance for greater character subtlety than the stage. This brought him into conflict with Mack Sennett, Keystone’s founder, who felt film footage used for character development a waste of time and money. Sennett decided to fire the upstart Englishman, but the revenues pouring in from Chaplin’s unique films persuaded him to reconsider.

Chaplin did not experiment with many costume characters before settling on the Little Tramp. Hobo characters had provided a criminal stereotype in fiction and melodrama since the late 19th century, when a series of economic depressions created widespread unemployment, and many men hit the road in search of work. Tramps were reviled in polite society for their perceived laziness, lawlessness and drunkenness. But Chaplin was attracted to the vagabond’s freedom and saw his character of the Little Tramp as “many-sided—a tramp, a gentleman, a poet, a dreamer, a lonely fellow always hopeful of romance and adventure. He would have you believe he is a scientist, a musician, a duke, a polo player. However, he’s not above picking up a cigarette butt or robbing a baby of his candy.” While his films were admired by aristocrats and intellectuals, his main audience was the common people who shared many of the Little Tramp’s privations. Although Chaplin’s character had a fastidious gentility that made him seem ridiculous, his appealing independence transcended the standard tramp clichés. Throughout the teens he moved from studio to studio, pocketing ever bigger paychecks, until he became one of the founders of United Artists in 1919, giving him a creative freedom virtually unmatched in the whole of cinema history.

Chaplin’s life, and the movie business itself, had undergone enormous changes as he embarked on the film that would become City Lights. In his personal life, he endured a lurid divorce trial, brought by his 19 year old 2nd wife, Lita Grey Chaplin, mother of his two young sons. Her alimony would be the largest such settlement in history to that date. He was also sued for back taxes, and his financial outlay for these two calamities would be 3.5 million 1920s dollars. Chaplin’s beloved mother died just as he began production, freeing him from that complicated relationship, but triggering sorrow and regret. One writer has suggested that, even though Chaplin’s autobiography was not particularly evident in his film works, the Little Tramp’s desire to heal the Flower Girl’s affliction in City Lights was a reflection of the powerlessness he felt about his mother’s condition.

And, when he commenced filming, the movie business had definitely shunned silent film, the medium that had made the Little Tramp beloved in every corner of the globe. What would this character’s voice, his language, his accent be like? Chaplin knew that making any decision at all would shatter the universality of his character, and determined that in his next film he would remain silent. Asked his opinion of talking films in general, he announced, “You can tell ‘em I loathe them…they are spoiling the oldest art in the world, the art of pantomime” (Maland 29). He was thought, in some corners, for being arrogant in his avoidance of talking pictures. And, of course, 1929, in midst of filming, the stock market crash heralded the beginning of a world wide depression. The irony of the spreading economic calamity, rarely examined by his legion of fans, was that Chaplin became stratospherically wealthy, the highest paid entertainer in history, for playing a homeless man.

Chaplin worked carefully on the story for his films, outlining the story and individual scenes, and he worked on City Lights for a year before the cameras rolled. While he may have reshot individual scenes many times to get the effect that he want, he rarely eliminated whole sequences once shooting began. He began to build his bustling city at his studio and had staff design sets and costumes, in spite of the tremendous disruption of the widening of La Brea Avenue, necessitating many of the studio buildings being moved 15 feet back to accommodate the construction. His leading lady was a young Chicago socialite Virginia Cherrill. She was lovely, but had no acting experience, but Chaplin cast her because he said she was the only actress who could simulate blindness without being offensive, taking his instruction “to look inwardly and not to see me” (Robinson 398). He always preferred inexperienced players for important roles, because he acted out every character, every gesture himself, and expected his instructions to be followed precisely. The first scene he shot with her became legendary for his insistence that she hand him a flower, and say one line, “Flower, sir?” which would not be heard. He spent hours, days, weeks–take after take, fuming at Virginia’s inexperience and her inability to do a simple gesture as he instructed. Perhaps part of the problem was that, unlike the passionate relationships he had with many of his leading ladies, he simply didn’t care for her personally. She said many years later, “I never liked Charlie and he never liked me” and he never met her outside the studio or invited her to his home (ibid 399). He finally gave up and decided to shoot the film around her, and she didn’t return to the studio for the next six months. 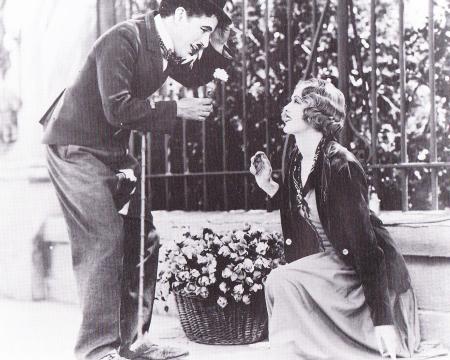 Cherrill had no interest in an acting career. She stayed out late, and came in for shooting looking tired. Chaplin was frustrated; he needed collaborators around him who could share his level of enthusiasm for his work. When he was preparing himself for the emotional final scene, she asked if she could leave early, as she had a hair appointment before a party that evening. In a rage, Chaplin fired her, and decided to reshoot the entire film with his heroine from The Gold Rush, Georgia Hale. So, he screen-tested her, and other actresses, as well. When he finally decided to ask her to return, Cherrill had been coached by her friend Marion Davies to point out that the contract she had signed as a minor was no longer valid, since she had turned 21. Chaplin couldn’t believe it, but a week later, Cherrill was asked to return to the studio, at double her previous salary of $75 a week. Chaplin may have admired the show of spunk, at any rate, she went to his dressing room and after an hour’s lecture emerged in tears, and there were no further problems. Chaplin’s biographer David Robinson suggests that is precisely her lack of interest in an acting career that makes her role avoid the obvious pits of sentimentality that a more experienced or ambitious actress may have brought to the role.

Chaplin composed the music for the film, and added the sound effects. He was not a trained musician he “la-laed” it and it was transcribed by composer Arthur Johnson. (The person who would do this job for his next film, Modern Times, was David Raksin, who would go on to compose the theme to Laura, which we heard in our fall series.) In fact, the Chaplin estate does not permit screenings of Chaplin’s films without his original scores.

Chaplin took situations that could have been played for tragedy and transform them into comedy. Homelessness and hunger are not laughing matters, but Chaplin suggests there is more than one way of looking at misfortune. Some critics admired the vulgar impulsiveness of the Little Tramp, while others found him too close to the gutter. You can see that Chaplin never forgot the sting and shame of poverty.

Kevin Brownlow, in Hollywood: The Pioneers, notes that Chaplin is currently out of fashion, as comedians like Keaton and Lloyd have temporarily eclipsed him in the public taste. Brownlow sees this as a passing phase. “Fashion will change again and so long as Chaplin’s films survive, so will his genius. He was, and he will always remain, the greatest comedian in the history of motion pictures.”

City Lights was Chaplin’s favorite of his films, even though the creation of it had been agony. The film was acclaimed from the moment of its premiere to, Life Magazine choosing it as the best film of 1950 to, well, the latest headline grabbing AFI poll. James Agee wrote of the final scene, “It is enough to shrivel the heart to see, and it is the greatest piece of acting and the highest moment in movies” (Robinson 410). 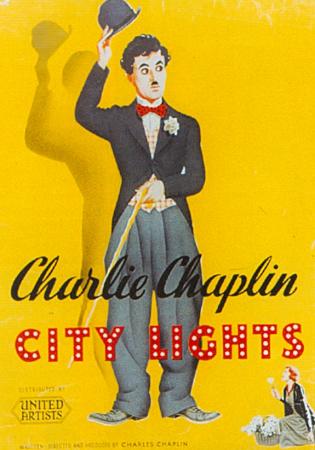 (Poster from Robinson (2) still from Sinyard. Sources include, Chaplin: His Life and Art by David Robinson, Charlie Chaplin: The Art of Comedy by David Robinson, The Films in My Life by Francois Truffaut, Classic Movie Comedians by Neil Sinyard, City Lights by Charles Maland one of the BFI Film Classics series, Hollywood: The Pioneers by Kevin Brownlow).