A daring daylight robbery goes awry, and macho bravado intersects with tender emotions. Ventura (Army of Shadows) is a hardened hood on the lam, aided by the youthful, charismatic Belmondo, who shot Classe back to back with his iconic role in Godard’s Breathless. Fans of The Sopranos will recognize this view of criminals as both ordinary and supremely vicious. Lisa Swartzbaum in Entertainment Weekly raved about the revival “…a doozy of a French gangster pic…a neorealist, neo-noir black-and-white masterpiece…one of the highlights of the 2005 movie year.”

Director Claude Sautet’s love for fine arts directed him first to sculpture, and then to painting film sets. He wrote music reviews for the leftist journal Combat, and after meeting a film editor began to consider cinema as a career. He had the usual long apprenticeship in French cinema, and was known for his technical skills. He went to film school, made shorts, was an assistant to Jaques Becker, notably on his horror film Eyes Without a Face, and wrote scripts in collaboration with established directors. François Truffaut called him a “’patcher-upper’ of screenplays” as he was able to bring a mediocre film back to life via his great talent of montage’ (Lanzoni 270). His first feature was in 1955, followed by this film, in 1969 he did what contemporary critics called his first “major” film, Les Choses de la Vie in 1969. Nominated for a Golden Palm at the Cannes Festival, it was remade by Mark Rydell as Intersection. His film Un Histoire Simple was nominated for a Best Foreign Film Oscar in 1978. Later films, more well known in the US, are Un Coeur en Hiver and Nelly and Monsieur Arnaud, which earned him the accolade of being ones of the heirs of humanist French director Jean Renoir.

Classe Tous Risques was based on a serie noir book by Jose Giovanni, who wrote in a more realistic style than some of the other serie noir authors beloved of French New Wave directors. Giovanni was a bit of a shadowy figure. He joined the French Resistance during WWII. After the war, he was convicted of being part of a criminal gang and sentenced to death. His father worked tirelessly to secure his release (the subject of Giovanni’s final film script) and after he gained his freedom, he wrote a book, Le Trou about a prison break he participated in, which he later turned into a script for director Jacques Becker.

Sautet described this film as “a thriller of a kind that did not exist in France at that time…a crime film heavily influenced by American B movies, but at the same time, very French, with a rhythm of tenderness and violence” (Buss 102). Like many others, he was influenced in his directing by what was considered “good” literature, the novels of Faulkner and Dos Passos, as well as the “bad” crime novels.

Sautet collaborated with Giovanni on the script, with the encouragement of Lino Venturi, his leading man. But, his producers hated the script, because they thought the hero should be more sympathetic, and the film was made only through the participation of Italian producer Morris Ergaz, who insisted they cast his girlfriend, Sandra Milo, as love interest. Sautet was attracted to the story for a simple reason, “It was seeing two men on the run, lost in a city, Milan. Former mobsters, big bank robbers reduced to committing some pathetic crime: in other words, the theme of downfall” (Sautet 1). He wanted the film to be stark, neo-realistic, but the producers insisted on more action, and an explanatory voice over. “All that was left was for me to treat a noir-ish love story through harsh violence, a willfully impoverished and anti-literary language. I saw it as an opportunity to make a French film with all that I’d learned from the American B movies” (Sautet 2).

His Italian crew had a lot of experience with location shooting, which Sautet preferred to the studio. On location, the cameraman is forced to use short lenses, because you can’t pull back to show obtrusive backgrounds. In the studio, longer lenses can photograph a controlled set, but it is almost impossible to get inside and outside lighting to match, especially under rather straightened financial circumstances. He rehearsed the robbery on the Via Orefici at midnight, when there were no passers by, and then shot in midst of real crowds, which caused an unexpected problem, as people not in the film began to chase the robbers thinking it was a real crime. The assistants had to stop the crowds from interfering in the action. The Italian extras were extremely conscientious. “One of them, who was playing a carabinieri, was supposed to be knocked unconscious off-camera. He remained lying on the sidewalk after we cut. An ambulance pulled up without our realizing. Inside, he kept playing his part until he reached the hospital, thinking he was still being filmed” (Sautet 3).

Lino Venturi was born Angelo Borrini in Parma Italy, coming to France when he was 8 years old. He found his first fame as a wrestler and fight manager. His debut in Touchez Pas au Grisbi, led to his fame in a series of French secret Agent movies, in which he was nicknamed The Gorilla. He was also in Elevator to the Gallows, another great French thriller we’ve shown here at the NCMA. He often played tough guys with a sensitive side, and was praised for his naturalistic style.

Sautet wanted to cast Jean Paul Belmondo, who at the time had little experience. Perhaps, it was because Belmondo had a strong physical resemblence to Venturi, accentuating the father-son subtext. Belmondo was a sculptor’s son who had studied acting at the Paris Conservatory. The producers begged him to cast a more well-know actor in the pivotal part, little realizing that Belmondo, who was simultaneously filming Breathless for Jean Luc Godard, would soon rocket to the top, becoming perhaps the most famous French actor of the day. He worked with virtually every major director of the 60s and 70s, including Godard in films like Pierrot le Fou, and Truffaut in Mississipi Mermaid. His anti-heroic handsomeness led many critics to compare him to the tough guy of another era, Humphrey Bogart, a parallel drawn explicitly in Breathless.

Sautet cast all the roles carefully, including Marcel Dalio, who had been in Renoir’s masterpieces, La Regle du Jeu and Grand Illusion, as well as American films like Casablanca. Stan Kroll, who plays Naldi, Abel Davros’ partner at the beginning of the film, was someone that author Giovanni knew from prison. Sandra Milo was dubbed because of her Italian accented French, Sautet had no interest in her clothes or hair style, so she did what she liked. Her sultry beauty would adorn, most notably, Fellini’s films 8 ½ and Juliet of the Spirits.

Sautet didn’t realize that Giovanni had used a gangster who had been part of a famous mob during the Occupation as a model for Venturi’s character of Abel Davos, realizing it only when tipped off by the appreciative complements of some real underworld characters. Sautet denied he was familiar with the world of crime, “’Familiar with’ is saying a lot. I had a minimum of contact with it, which helped me to straighten out the inevitably picturesque vision you have of gangsters. They liked to drink champagne. Aside from their sinister activities, they seemed polite, friendly” (Sautet 4).

John Woo considers this one of his favorite film noirs, and Jean Pierre Melville was such a fan of Sautet’s work, that he would champion him from the audience at screenings. Future director Bertrand Tavernier’s first published film review was on Classe Tous Risques, ignored, because it did not fit comfortably into the exploding stylistics of the French New Wave, “Classe Tous Risques is not a B film. It is one of the best French gangster films, tense and warm, elliptical and human, which revealed Jean-Paul Belmondo before Breathless.”

Dubbed into English, and briefly released in the US as The Big Risk, this print has yummy new subtitles by the king of vintage French underworld slang, Lenny Borger. The title translates as a type of insurance policy, kind of like Double Indemnity, but is also a pun on “tourist class.” Claude Sautet’s “Classe Tous Risques is the kind of French movie that makes you want to throw on your trench coat, light up a cigarette and shoot somebody.” A.O Scott enthused in the NY Times, adding, “It is worth seeking out, not only because Classe Tous Risques represents a missing piece of film history – a link between the great postwar policiers and the brooding 1960’s gangster dramas of Jean-Pierre Melville – but because it is a tough and touching exploration of honor and friendship among thieves.” 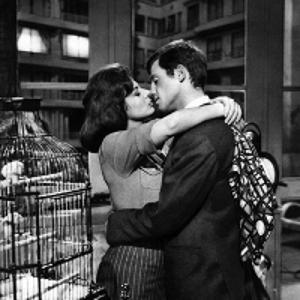