This first half of the 2023 season of the Moviediva Film Series will focus on twinning, as I’ll show two films that spark off each other on a single theme.  We begin with two movies highlighting the 1940s nostalgia for the Good Old Days of the so-called Gay 90s, Cover Girl and It All Came True.  There were many others!  Rita Hayworth, her voice dubbed by Martha Mears, plays her own grandmother as a soubrette in flashback, singing a genuine turn of the century song, “Poor John” made popular by music hall performer Vesta Victoria in 1907 and written by composer Henry E. Pether and lyricist Fred W. Leigh. 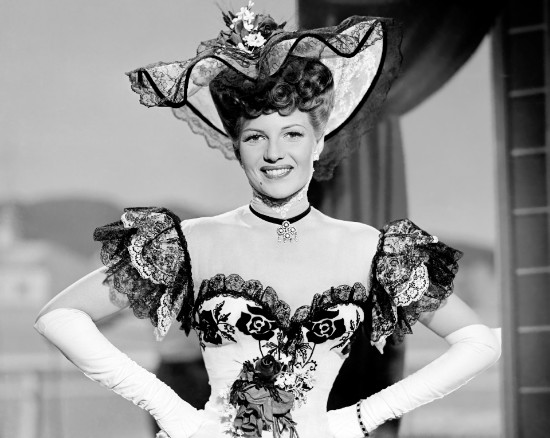 Cover Girl was a crucial turning point in Gene Kelly’s career. He was a contract player at MGM, and he was antsy. He dreamed of reinventing the Hollywood musical inspired by the model created by choreographer Agnes De Mille on stage. In her landmark Broadway dances in Oklahoma, the dance evolved from the drama, instead of interrupting it. He got his chance when Cover Girl‘s producer, Arthur Schwartz, wanted to borrow him from MGM for the part of nightclub owner Danny McGuire opposite Rita Hayworth. Columbia’s belligerent mogul, Harry Cohn, was reluctant. He considered Hayworth his protégée and protested, “That tough Irishman with his tough Irish mug? You must be joking. You couldn’t put him in the same frame with my Rita.”

Cohn finally relented, but some footage had already been shot, including the opening number “The Show Must Go On.” Kelly and 19-year-old co-choreographer Stanley Donen were so appalled at the chorus’ sloppy footwork, that they brashly inserted three reaction shots of Kelly in the wings, shaking his head in disapproval, so no one would mistake the routine for their work. 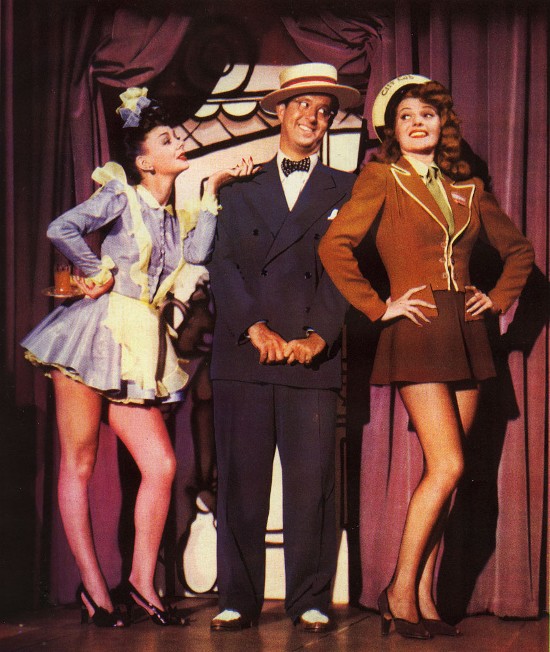 Thanks to Axis trickery, my coffee now is chicory, and I can rarely purloin…a sirloin. Phil Silvers brings some vaudeville verve.

Cover Girl‘s haphazard screenplay had been cobbled together by Virginia Van Upp, who fashioned this musical classic from 7 or 8 weak scripts. This was her first screenplay for Columbia, she had been wooed to the studio to work on Hayworth’s films.  The dialogue was created specifically for Hayworth, Van Upp even changed it on the set, which was unusual, since writers were rarely welcome there. “Van Upp’s involvement in the project extended beyond tailoring a role for Hayworth on the page; she paid attention to the grooming of the actress into top-line material right down to organizing her costumes.  During the production, a bond developed between the writer and the actress” (Franke 63) and they would work closely on her next film, Gilda. 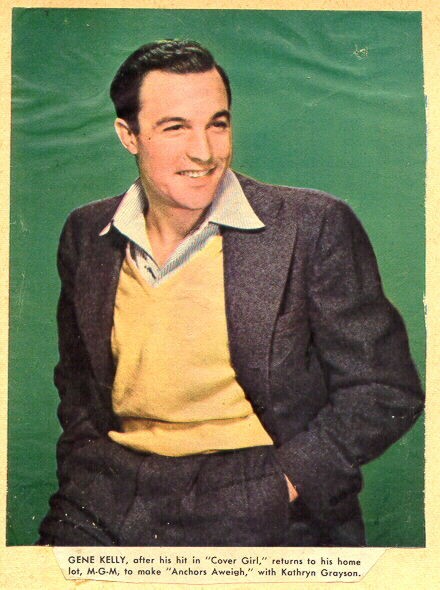 Rita Hayworth was never more radiant than as Rusty Parker, a Brooklyn chorus girl who ends up on a Vanity magazine cover as The Golden Wedding Girl. Hayworth was exquisitely happy during the filming; she eloped with the great love of her life, Orson Welles after a day of filming Cover Girl. She was 24, and 28-year-old Welles was still riding the crest of his great early successes. 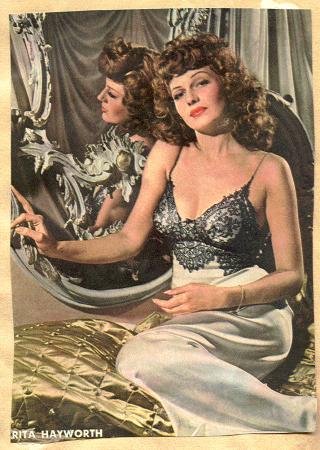 Jerome Kern’s “Long Ago and Far Away” was considered by many to be the film’s musical highlight. But the exuberant trio “Make Way for Tomorrow” with Kelly, Hayworth and Phil Silvers is even better, and foreshadows the three sailors Kelly and Donan would later take On the Town. Some film historians date the moment the three of them push back from the lunch counter and start to sing as a transitional film moment between backstage and character musicals. 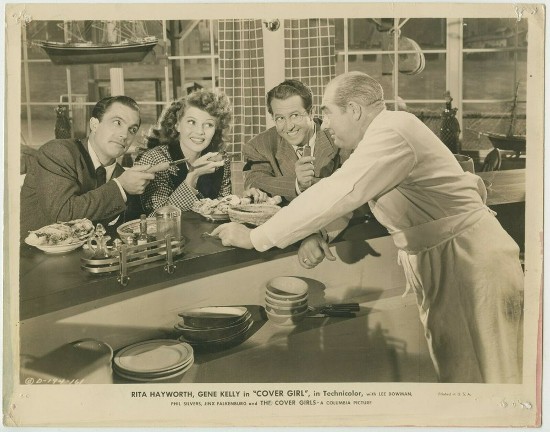 “Come on, poil (pearl, in Brooklynese)”

Kelly’s “Alter-Ego” dance with his own reflection inspired his “Singin in the Rain” solo in the film of the same name several years later. Kelly remembered…” I wanted to further the plot emotionally and not just be a musical interlude. But unless you’re in a ballet, you just can’t start to dance…so in Cover Girl what I decided to do at this point was not state my thesis in a song, but in a few words which came over the soundtrack as if they were my ‘stream of consciousness’ and then go into a dance.”

Director Charles Vidor washed his hands of the number, believing it was technically impossible. Donen said, “We would have to repeat the camera moves by ourselves, with Gene performing the dance twice to the prerecorded soundtrack. I knew it could be done by having him hit the same spots the second time as he did the first, which Gene could do, and then we could film it by having the camera hit the same marks both times, which I knew I could do.” The amazing precision had a lot to do with Kelly’s incredible ability…some called him the human metronome. 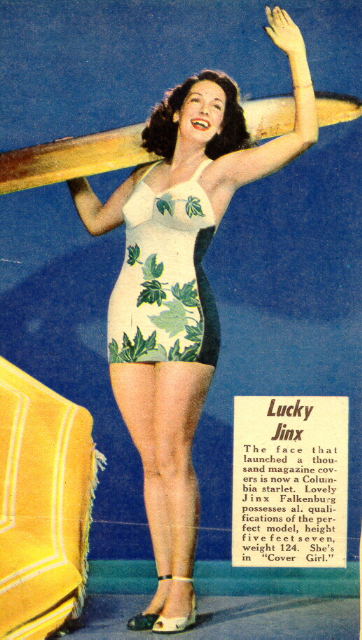 The world of Cover Girl seems like total fantasy. But former Vogue editor Rosamond Bernier wrote: “Vogue was something in those days. I came in my first morning and saw all the editors at the typewriters wearing hats with veils and big rhinestone chokers and earrings. I looked with absolute wonder!” Cover Girl is about glamour, a word that alludes to an attractiveness so powerful, that it must be sorcery. None of the real 1940s cover girls in the film (like Jinx Falkenberg) could ever dream of coming close to Rita Hayworth’s goddess-like perfection. 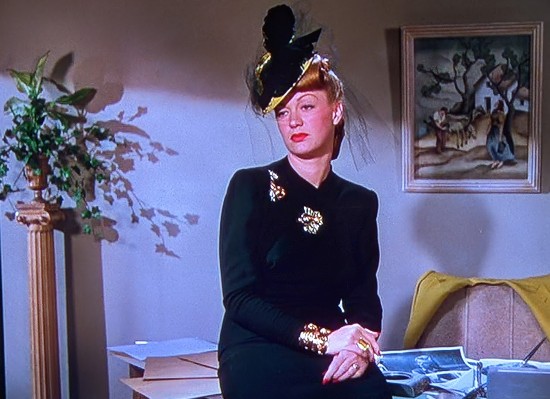 The costume credit is shared by Travis Banton, Muriel King and Gwen Wakeling.  I would dress like Eve Arden in this film every day if I could. 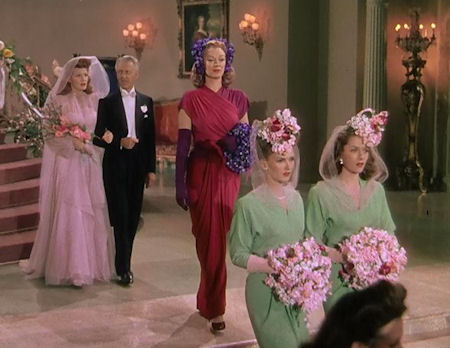 Greatest wedding ever! Arden carries a muff made of fake flowers instead of a bouquet! 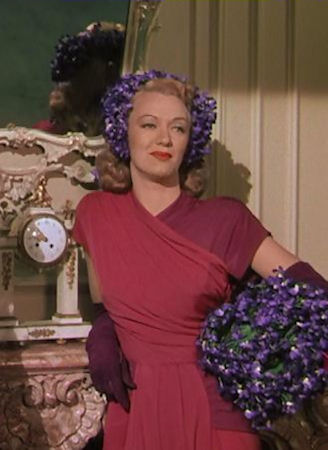 Eve Arden’s draped dress and matching hat and muff.  Her tart wit is a highlight of every film she’s in. 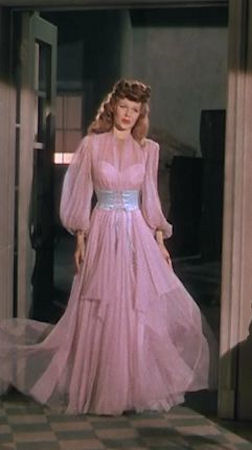 Rusty’s dilemma, according to Janine Basinger in A Woman’s View, is choosing between an older suitor who offers her fame and success, a man who loves her (and is rich, manipulative and bossy), or the man she really loves (who is poor, manipulative and bossy). Poor Rusty spends all her time soothing fragile male egos.  Has it ever been any other way on screen?  Can an exception be made if he looks and dances like Gene Kelly…?

(Kelly and Falkenburg photographs from Claire Drazin’s Movie Star Scrapbook, Hayworth from anonymous movie star scrapbook. I’d only seen Cover Girl on a little tv, on video tape or broadcast TCM…a giant tv and a DVD makes it shimmer!)  Sorry my footnotes are uncredited by and large, this is one of my earliest essays.  I must have shown Cover Girl in my very first NC Museum of Art series in 2000.  Sources include Script Girls: Women Screenwriters in Hollywood by Lizzie Francke.