A murderer on the run is also the wildly successful author of France’s rootin’ tootin’ cowboy, “Arizona Jim.” Renoir (Grand Illusion) and his screenwriter, Jacques Prevert (Children of Paradise) are fully on the side of the office workers, laundresses, street kids and typesetters victimized by the monstrous publisher, Batala.  “Of all Renoir’s films Monsieur Lange is the most spontaneous, the richest in miracles of camera work, the most full of pure beauty and truth. In short, it is a film touched by divine grace.” (Francois Truffaut) 100% on Rotten Tomatoes.

Jean Renoir was the middle of three sons born to Impressionist painter Auguste Renoir, and as a boy was the subject of many of his father’s paintings. He grew up in a lively and unconventional atmosphere amongst family and friends who valued beauty and creativity. Renoir discovered a passion for the movies during his long recovery from several WWI injuries. He inherited money from his father and set up his own film production company. In the 1930s he made a number of superb movies, at least two of which, La Regle du Jeu (The Rules of the Game) and La Grande Illusion recur time and again on lists of the greatest films of all time.

The Crime of Monsieur Lange was made at a time of great political turmoil in France.  Fascist groups in France were gaining traction, and in opposition, left leaning parties joined to create Le Front Populaire, to stem the authoritarian tide.  The Popular Front won power in the 1936 election. Leon Blum became Prime Minister and instituted reforms like paid holidays and the 40-hour work week.  Due to internal politics and right-wing pressures, the Popular Front fractured, Blum resigned in 1937 and the movement ended in 1938, paving the way for the Nazi occupation of France.  Tthe political situation in France was deeply entwined with the creative impulses fueling this film. 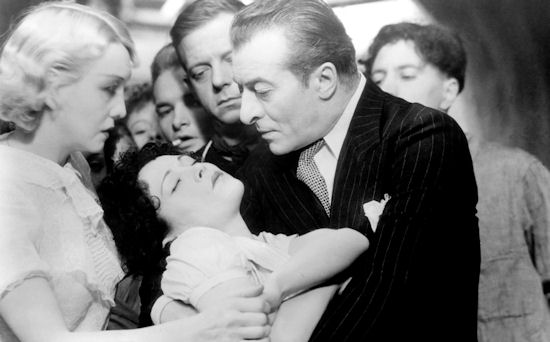 Renoir and other cinema colleagues were close with a radical theater company who called themselves Groupe Octobre (named after the month in which the Russian Revolution succeeded).  They took activist plays to the people, in factories and other workplaces, and to strike meetings.  Members of this group included many who would collaborate with Renoir on his films, and their philosophies were influential.  Renoir also made anti-Nazi propaganda films in the 1930s, stating, “I believed that every honest man owed it to himself to resist Nazism. I am a filmmaker, and this is the only way in which I could play a part in the battle” (Renoir 125).  The Nazis eventually attempted to recruit him, after which he fled France for Hollywood.  He was unappreciated as a movie director in California.  “Renoir has a lot of talent, but he is not one of us” said Darryl F. Zanuck, his studio boss.  The director’s reply was that “it has been a pleasure working at 16th Century Fox” (Thompson).

One of Renoir’s Groupe Octobre friends was Jean Castanier, a Catalan painter who had designed sets for several of his films.  Castanier wanted to make a film called Sur la cour (Overlooking the Courtyard) about a group of printers and laundresses living and working on the same square, who turn their businesses into cooperatives.  Castanier and Renoir started working on a script, but it was not until they brought in surrealist poet Jacques Prévert that the film began to take shape.  This was the only collaboration between Renoir and Prévert, but Prévert would go on to write many renowned films like Les Enfants du Paradis.  Although some feel the title Sur la cour is a more descriptive title, the film’s name includes a pun, Monsieur Lange, because with the addition of an apostrophe, the word becomes L’ange—the Angel.  Immediately the tantalizing question is posed, “What is the angel’s crime?”

The Crime of Monsieur Lange was filmed in a month, for a relatively low budget, on location in Paris, and in a complex courtyard set built at the Billancourt Studios.  Renoir said, “Prévert came on the set every day.  I constantly said to him, ‘Well, old man, here we have to improvise,’ and the film was improvised, as were all my films, but with Prévert’s constant collaboration.  I’m sure that it would be impossible to know the origin of which ideas were mine and which were Jacques.  Actually, we found everything together” (Bergan 148).  One critic wrote, “Prévert has brought his spritely, mordant wit to Renoir, who lent, in turn, the depth and resonance of his authentic romanticism to Prévert’s imagination, which is more clever than creative.  The result is a stunning spectacle, uneven, moving, and terribly non-conformist” (Bazin 42).

It not only references the Popular Front political mood, but the 1933 Paris-Strasbourg railway disaster, at the time, the second worst in history.  And, the communal feeling enfolds businesses run by both men and women, the print shop may be mostly male, but the laundry is staffed entirely by female workers.  Future director Jacques Becker Falbalas, Casque d’or, Toucher pas au grisbi) was Renoir’s assistant at this period in his career, and it’s likely he worked on this film, perhaps even on the original script with Castanier (Naumann 19). 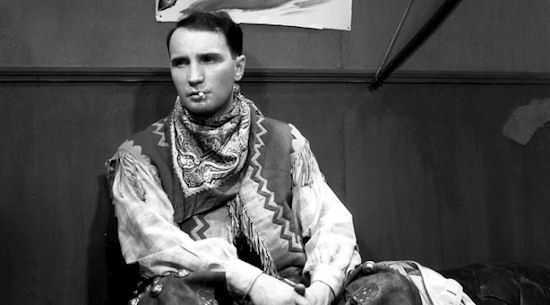 The odious publisher, Batala, is played by Jules Berry, considered the most despicable villain in 1930s French cinema. Berry had been a stage actor since the early years of the 20th century and made his first film in 1911.  He acted in 89 movies and is most famous for his role as the Devil in Marcel Carné’s Les Visiteurs du Soir. Andre Bazin said of his performance, “Renoir adores this kind of genial ham actor, who is never better than when working with him.  He knows how to put them at ease, while at the same time giving them the necessary direction.  The Crime of Monsieur Lange Berry’s is a sublime creation of villainy” (Bazin 46)

One of the most remarkable qualities of the film is the fluid camera movement, visually linking all the characters in the courtyard. The circular pan near the end encompassing the community, and the deep focus photography, were admired greatly.  But the film was not a critical or audience success, as the communal sentiments were a little too radical for French audiences of the day.

Although this film reflects the 1930s politics, its lively characters and approachable humor makes it universal.  And, as J. Hoberman recently wrote in the New York Times, “With its splendid 4K restoration, Monsieur Lange looks brand-new. Given its emphasis on the predatory behavior of powerful men and the precariousness of the journalistic profession, it is as topical as any movie made this year, and a good deal funnier than most” (NY Times). 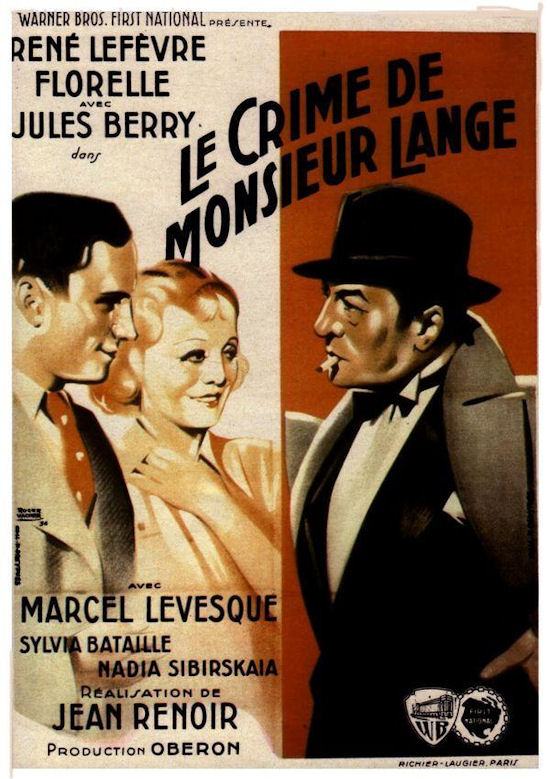