A chump (Lancaster in one of his earliest films) and a temptress, divorced but still passionately entwined, become entrapped in a security truck robbery doomed by a double, double cross. Working class Los Angeles is the setting for “the most underrated noir of the classic era” (Rough Guide to Film Noir). Universal Studios archive print.

In classic film noir style, the hero is usually a “poor sap” a weak man who doesn’t have a chance against the rapacious female who has targeted him. The classic example is Double Indemnity with Barbara Stanwyck and Fred McMurray. Part of the reason for this imbalance might have been the studio system itself. Often studios hesitated to cast strong leading men opposite their best actresses, thinking one big star was enough to insure a box office hit. Hence, all the Bette Davis movies in which she pines for George Brent. But, Criss Cross has the virile and athletic Burt Lancaster as the man hopelessly snared by the voluptuous Yvonne de Carlo. This brings another layer to the formula, in which a man, no matter how street smart, is doomed when he is no longer thinking with his brain. Lancaster’s character has “a slick instinct for the wrong girl, the wrong choice, all the while blaming it on fate” (Buford 92).

Criss Cross was inspired by a novel by Don Tracy about a racetrack robbery meshing dangerously with sexual passion. Daniel Fuchs rewrote the film to foreground an armored car robbery. Part of its appeal is the dramatic cinematography. “The film was shot on location in Los Angeles and his depiction of the city is nuanced, textured and gritty. He (Directeor Robert Siodmack) has an avid eye for the glamorously grungy.” (Brody). It’s almost like a documentary portrait of working class LA, what David Thomson called “the dusty sheen of an LA that John Fante wrote about” (Hillier and Phillips 57). Mark Hellinger, the original producer of the film, had wanted the it to reflect the entire city, but Siodmak used the claustrophobia of Bunker Hill and its rooming houses to reflect the sense of the hero’s narrowing options. This was a part of town beloved of Raymond Chandler, as well, a more established neighborhood far from the suburbs that began to sprawl around Los Angeles after WW II. Now long gone, Bunker Hill also figured prominently in The Exiles, a film we showed a couple of years ago about Native American looking for work in Los Angeles. Urban renewal destroyed Bunker Hill in the 1960s, but the Angel Flight funicular railway has been refurbished and relocated. The two cars, named Olivet and Sinah, are available for rides costing 25 cents. 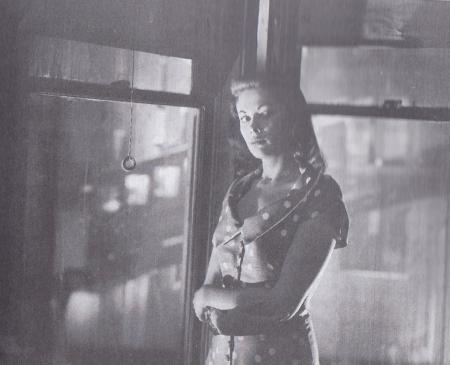 Burt Lancaster’s first important film was The Killers, also directed by Robert Siodmak. He was cast in Criss Cross by Damon Runyon-esque newspaperman turned producer, Mark Hellinger. Lancaster was born in East Harlem, his mind as sharp as his good looks. Although he first disdained acting as “sissified,” after knocking around as a circus acrobat he got a small part on Broadway in a play that closed in three weeks. But, the short run resulted in 7 Hollywood contract offers for him. He spent most of the 40s appearing in a series of hard hitting noirs “in which the main attraction was the somewhat kinky spectacle of a chiseled Adonis mercilessly flogged, either by brutal authority or treacherous women” (Muller 100). But, Lancaster was more than just good looking. He was interested in film technique and was an astute businessman, skills he would eventually use by creating his own production company.

Criss Cross was the last film Lancaster would make under a contract that he had hoped to avoid completing. He thought it was going to be “celluloid trash.” Hellinger, had hoped it would do for LA what his hit film, The Naked City, had done for New York. But, Hellinger died suddenly, and director Robert Siodmak was now in charge. With a low budget and nobody who much cared about a crime film, he “made a little masterpiece” (Buford 92). The locations included the aforementioned Bunker Hill, Union Station, and a factory on Terminal Island; all other sets were constructed on a single sound stage.

Yvonne de Carlo is best known today for her role in the tv show, The Munsters, but she was once the winner of a studio search for “the most beautiful girl in the world.” She was cast in the title role in “Salome, Where She Danced,” the first in a series of exotic roles spotlighting her ability as a dancer. She was anxious to play a role of more substance in this film, but thought that when producer Mark Hellinger died another actress would be cast. But, the studio passed by Ava Gardner and Shelly Winters to honor Hellinger’s promise to de Carlo to play Anna.

Dan Duryea was a New Yorker from White Plains. He attended Cornell, where he was President of the Drama Society! He starred on Broadway in Dead End, and then in The Little Foxes, by Lillian Hellman. He recreated his role as the weakling Leo Hubbard in the 1940 film adaptation of the latter, and stayed on to play a series of violent gangsters, and, later in his career, Western villains. Needless to say, these characters bore absolutely no resemblance to his real life.

This film includes one of Tony Curtis’ earliest appearances, an unbilled bit, a little preview of our tribute to him in March. You can see him dancing in a nightclub with Yvonne de Carlo. Shortly after signing a seven year contract at Universal, he was walking across the lot when a man stopped him and asked “can you dance?” It was Robert Siodmak, who had just directed “The Killers” with Burt Lancaster and Ava Gardner. Curtis said yes—even though he couldn’t dance.

“I was on the screen for about two minutes. I was supposed to do the rumba, whatever that was. I just shook my body like crazy, and everyone loved it. When Yvonne’s character and I are dancing, Burt walks in and sees us. She goes over to him, and I’m left standing there, but I decided not to let that bother me. I was going to dance dammit, girl or no girl. So, I kept on going. They liked that, too.”(Curtis 98).

All Curtis’ friends and family in New York were waiting anxiously for the picture to come out, and gave it a big reception at the neighborhood bijou. But, it wasn’t just the people who knew the kid from the Bronx who were impressed. Movie fans wrote the studio, “Who was that guy who danced with Yvonne De Carlo?” The studio instantly renewed his contract and gave him a raise to $125/week. He said he may have only been on the screen for two minutes, but they were the most important two minutes of his life.

Criss Cross is “…one of the bleakest, if also the most visually rich film noirs of the 1940s” (Hillier and Phillips 58) The stylization and flamboyant acting style is the opposite of Steve Soderbergh’s remake, The Underneath, which foregrounded realistic acting, neglecting memorable shots like the camera swooping down like a bird of prey on the trysting lovers at the beginning. “Modern film noir plays like real life. Classic film noir plays like fevered memory” (Muller 102).

“Criss Cross is arguably the most complete noir of the classic era. It combines archetypal characters—a doomed protagonist, a calculating femme fatale, a reptilian hoodlum—with the tale of a meticulously planned then botched heist, all seasoned by a complex flashback and Lancaster’s self-deluding voice over. For the perfect introduction to classic Los Angeles noir, there can be no better place to start than here” (Ballinger and Graydon 78). 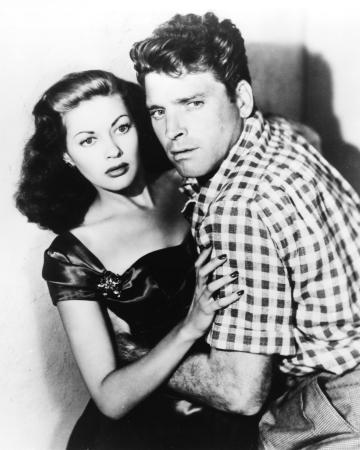