Portly cubicle drone Bruce has banked down the fires fueling his passion for competitive salsa dancing.  Challenged by a horrible workplace bully, and his dawning feelings for the new boss, Bruce (Frost, soloing without Simon Pegg, his usual comic partner) dons the ruffled satin shirt once more to a pulsing soundtrack of Latin superstars.  “Ratatouille meets Billy Elliot… An enjoyably lightweight comedy thanks mostly to Frost and his endearing castmates.” (Newsday).

I always feel that part of my job as Film Curator is to scout out upbeat, funny films that are overlooked by the mainstream critics touting the next explosion heavy blockbuster, or the art house purists who prefer edgy downers. Simon Pegg, Edgar Wright and Nick Frost are the Cornetto Trilogy auteurs, Hot Fuzz, Shaun of the Dead and World’s End are all hilarious genre-busting comedies that you should put on your Netflix queue. But, in this film, Nick Frost breaks away from his usual collaborators to follow his own passion project.  Frost wanted to do a dance film to stretch himself as an actor, “I don’t want to be just a stoned mate or a drug dealer in films” (Low).

When Frost’s family furniture store went out of business when he was a young teen, his family was moved to a council estate, a housing project.  His father had a nervous breakdown, his mother was drinking, and he dropped out of school.  After working as a shipping clerk, he lived on an Israeli kibbutz for a couple of years and then returned to London.  He got a job at a Mexican restaurant, where he worked with a girl who was dating Simon Pegg, and they became inseparable friends.   “I worked in a restaurant and I kind of secretly knew I was a bit of a show-off, but I was happy being a waiter and I didn’t really challenge myself.”  Pegg encouraged him to try stand up, and then wrote a part for him in a tv comedy called Spaced.  Frost told himself, “You should do this because you’re 29 years old now, and you left school at 15 and have no qualifications; this could be it for you” (Arnold).

He’d never danced salsa before (this is NOT his life’s story) and he trained for 7 hours a day, 5-6 days a week for 7 months with a variety of championship teachers.  “When you do a dance film with someone, I didn’t realize that you’d get so close. With me and Olivia Colman” (I’ll keep you from wracking your brain, you know her from Broadchurch—she smiles so much here that she is hard to recognize*) “who plays my sister, because you’re together all the time, you’re just dancing all the time. I think there definitely is a connection between dancing and happiness. Throughout the whole seven-month period, I met hundreds of dancers and probably had 10 of them who were my trainers full time, and I never once saw them sad or upset. They just loved dancing. There’s definitely a connection” (Arnold).

“Listen, being an Englishman, those first two weeks I found myself constantly apologizing for having to take a girl into hold. It’s just not something that my culture does—we don’t dance like that anymore, which is a sad thing, but we dance on our own, singularly, or maybe at the end of a disco when they play slow music and you’ve had a few drinks, then you might dance with a girl. But that’s for its own ends. It’s not dancing for the joy of dancing. Just those first few weeks of having to dance with a girl was so alien to me” (Kourlas).

The whole point of me learning to dance for seven months was so that I could do that three-and-a-half-minute finale dance as a live dance in one shot. We did do that. We shot that a bunch of times as a wide, from top to bottom with me doing it all (Kourlas). 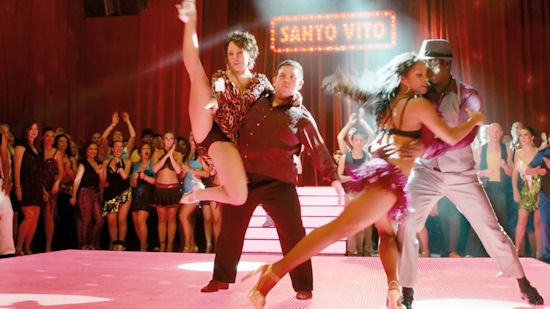 In a lot of romantic comedies, if the guy does it for the girl, and if you’ve created believable characters that you think had a life before we met them, they will then have a life after the film ends. If the guy does it for the girl, if that girl two weeks down the line says, “You know what? I really liked you, but this is kind of not working for me. Goodbye,” then that character is back to square one. But with Bruce, I thought it was important that if Julia got called back to Los Angeles to work, he would be sad, but he’d kind of be better. It’s about him doing it for himself and not just doing it for the woman. I think she was the catalyst that reignited him and reignited his passion for life, essentially. Because of that then, he suddenly becomes attractive. I think if there is a message in this film, it’s that passion is attractive. There’s more to attraction than the kind of crackle of aesthetic beauty, which essentially and in the long-term fades and gets flabby, but passion doesn’t (Arnold).

Making fun of fat people has been a cinematic tradition since the silent era.  Fatty Arbuckle (who preferred to be called by his name, Roscoe) and Oliver Hardy are the two most famous rotund early comics, but there were many more. As our esteemed projectionist, Doug Vuncannon remarked, Oliver Hardy doesn’t even look that fat, anymore.

Are you laughing at the overweight person, or with them?  I thought Melissa McCarthy in Spy made a lot of good points about women who look a certain way are underestimated, and undervalued.  Some people did think she was being mocked in an uncomfortable way.  She is in charge of her onscreen image; much the way Amy Schumer is.  But they choose to view themselves differently, perhaps because McCarthy’s gift for physical comedy takes her back to comedy basics.  Frost gives Bruce his dignity, while remarking on Bruce’s weight, and how this is reflected in the dance community.  He’s funny in his salsa passion, but I feel we are in on the joke with him.

I hope you avoided the film’s tepid reviews before you decided to come.  Or, maybe, you seek to be pleasantly surprised.  Having an enjoyable 90 minutes in the theater, like dancing, is an underrated pleasure. Roscoe Arbuckle, born 129 years ago this March 2016, once said, “I don’t believe there is any finer mission on earth than just to make people laugh.” I agree wholeheartedly. 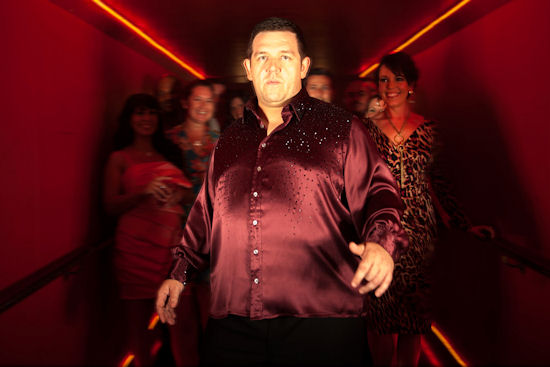