Dave is an ordinary guy with an uncanny resemblance to the current inhabitant of the White House.  When President Mitchell has a stroke, Dave steps in, but turns out to have his own big hearted ideas about how to run the country.  Ghostbusters director Reitman and former political speechwriter Gary Ross (Big) plump up their fantasy with political cameos and a sparkling comic turn by Oscar winner Kline.  “Mixing comedy and corn with surprising savvy…. It’s a winner.  The movie is selling the myth that the little guy can make a difference. Reality may give the lie to such sweet blindness. But for two blissful hours, Dave makes for a soul-satisfying game of let’s pretend” (Rolling Stone).

Most films about politics are cynical or scary.  It’s rare to find a film with a positive message about public service merged with basic humanity.  Mr. Smith Goes to Washington is the rare example of a nice guy finishing first in American politics, although that film is more cynical than you might remember.  That confidence in American goodness is sometimes called, Capraesque . Now, politics are so partisan and so bitter that this film seems like more of a fantasy than when it came out 26 years ago.  One of 2018’s surprise hits was the documentary about Mr. Rogers, Won’t You Be My Neighbor?  Dave gives a glimpse of what would happen if a person with Mr. Rogers’ kindness occupied the Oval Office. 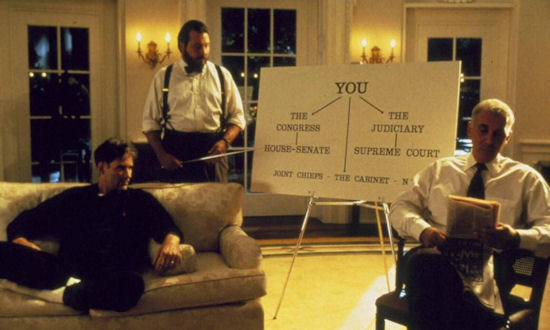 The basic plot is hardly original, dating back at least to Mark Twin’s The Prince and the Pauper, and The Prisoner of Zenda by Anthony Hope.  A regular person resembles a special person, and impersonation ensues.  The thrill is watching the ordinary one fake the specialness that got him/herself into the dilemma in the first place.

Screenwriter and political speechwriter Gary Ross had the original idea for the film, and along with producer Lauren Shuler Donner pitched the idea to a studio that refused to accept that a person could convincingly impersonate the President.  Eventually, Warner Brothers bit, and Ross wrote the script while simultaneously crafting slogans for presidential candidate Michael Dukakis.  The studio wanted a more high-powered actor, like Arnold Swartzenegger to play the part, and lacking him, Warren Beatty or Kevin Costner.  Beatty actually was the one who brought Ivan Reitman onto the film, and wanted to play the part, but negotiations stalled.  Ross then collaborated with director Ivan Reitman, and they brainstormed who could be the perfect casting.  They were pleased when Kevin Kline agreed to do it.  They needed someone tall, with good hair, and someone who could play three roles, Dave, the President, and Dave pretending to be the President.  Kline, to my mind, has more charm than any of those other actors, and a comic lightness that serves the role well.  At first, he hesitated, not wanting to repeat the kind of slapsticky comic role that won him an Oscar for A Fish Called Wanda.

Reitman thought some DC cameos would give the film a jolt of authenticity.  Reitman deputized Ross “to go to Washington and round up as many [cameos] as I could. So Warner Bros. printed me some business cards with their logo on it and I hit the White House Correspondents’ dinner trying to round up cameos. The cameos provided ‘verisimilitude,’” Ross said. “But I also had backed off the political point of view I had in the first draft. I tried to make it too neutral politically. When I committed to Dave’s character owning an employment agency and trying to help people get jobs, the script got much easier to write.” (Variety.com). 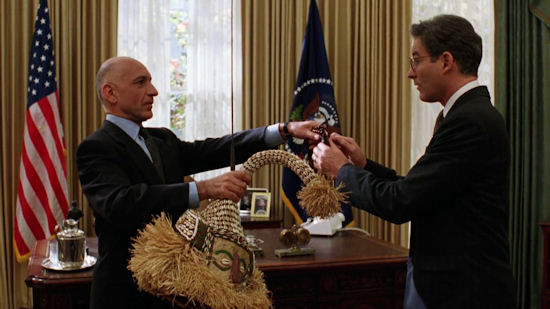 Chris Matthews, now on MSNBC,  was an old friend of Ross’ and was particularly taken by Frank Langella’s sinister turn as the White House Chief of Staff.  “I can’t say enough about how well Frank Langella played that part,” said Matthews.  “The way he came in organized and set up his press conference. The way he threw his notebook, his binder on the lectern. Complete confidence. This is his world. He owns his world. Totally at ease in his surroundings and a command of them and used to calling the shots, even with a president around.”  Still, Matthews added, “I do think the idea of this movie is that a good person can be a good president.” (Variety.com).
Reitman, Kline explained, “edited the film to make it as real as possible and not too silly — that perfect balance of comedy and romance against the most cynical background imaginable.” (Variety.com).

Kevin Kline was born in St. Louis and studied at Indiana University in Bloomington, where he became obsessed with theater.  He went to Julliard and then formed an acting company with fellow Julliard graduates including Patti LuPone.  He big breakthrough was as the Pirate King in Gilbert and Sullivan’s The Pirates of Penzance for Shakespeare in the Park, winning his second Tony Award (the first was in a supporting role in On The Twentieth Century).  Spending his early career in various roles at the New York Shakespeare Festival, he was called “the American Olivier.”  His first film role was in 1983’s Sophie’s Choice.  He’s continued to work steadily both on stage and screen.

Reitman had already worked with Sigourney Weaver on Ghostbusters, and decided she would be the perfect First Lady.  He said, “It had to be her.  So, I just called her up and said, ‘You and Kevin’ and she said yes.  It was very quick” (Collider.com). 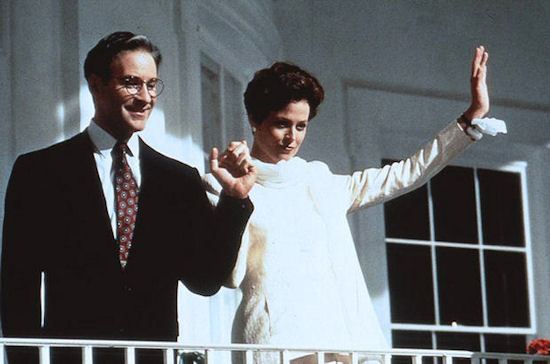 Reitman was used to working with comic actors who took a hand in shaping their starring screenplays. He was happy to have Ross collaborate with him both on the set and in the editing room.  Ross was nominated for an Academy Award for his screenplay.

Kevin Kline’s performance has lots of Presidential fans.  Bill Clinton gave Gary Ross a framed script, autographed and inscribed, “a funny, often accurate lampooning of politics” and a photograph of him holding a “Dave” coffee mug. He recalled walking down the Fifth Avenue during George W. Bush’s presidency when the POTUS was visiting. “There was a police escort,” Kline said. “I was just looking, and someone said, ‘I wish it was you. Why didn’t you run?’’ Former President Barack Obama once told Kline “‘I love ‘Dave.’ I love watching it when I’m depressed because you make it look so fun, you make it so easy.’ I think if our current president saw the movie, he’d be rooting for [President Mitchell].” (Variety.com)

“If you haven’t seen Dave, watch it soon. Enjoy the movie. Absorb the leadership lessons. And vote for Dave Kovic in 2020″ (Forbes.com).