A pacifist sheriff tames the wild frontier town of Bottleneck with brains instead of bullets. This Western spoof contains plenty of clowning, as well as an epic barroom brawl between saloon floozy Dietrich, and her rival, Una Merkel.  Marlene sings one of her signature songs, “See What the Boys in the Back Room Will Have.” 100% Fresh on Rotten Tomatoes.

James Stewart played two characters named for Thomas Jefferson in 1939, Jefferson Smith, in Mr. Smith Goes to Washington, and Thomas Jefferson Destry, in Destry Rides Again. Jefferson was not a president during a time of war, like Abraham Lincoln, a parallel that studios would hesitate to draw as the war clouds gathered over Europe.  Jefferson stood for the patriotism of the forefathers, but in a much vaguer sense to 1930s audiences.  The western, Stewart’s first, was his 5th film in 1939. “The lead role was tailored to fit him as perfectly as a thousand dollar custom cut cowboy suit” (Eliot 131).

Destry was based on a Western novel by Max Brand.  In the book, Destry was a cowboy framed for a killing, who seeks revenge after his release from jail.  Tom Mix had filmed the story in 1932 in a version sometimes called Justice Rides Again. Producer Joe Pasternak first thought of a straight remake with Gary Cooper, but when Cooper couldn’t do it, and Stewart was signed, writer Felix Jackson thought that Stewart would be unconvincing as a steel-eyed avenger.

The character of Tom Destry was not just a parody of typical two-gun cowboy heroes, but also of the “crackerbarrel philosopher” a rural man of the people, who typically uses his wit to combat political corruption.  Will Rogers, the sly commentator who “never met a man I didn’t like” is the best example.  This fellow uses homespun wisdom, in the form of folksy anecdotes, to prove his points, as does Tom Destry with his endless store of “I had a friend once…” stories.  In fact, Destry could almost be considered a comic spin on the crusades of Jeff Smith, in Mr. Smith Goes to Washington.

Frank Capra’s Mr. Smith…was a sensation, and more than any other film, helped cement Stewart’s screen persona. He had been floundering as a contract player at MGM, but his loan outs, first to Columbia and Frank Capra and then to Universal for Destry made him a star.  Columbia was wary of how Mr. Smith would be received, and in fact many considered it to be virtually treasonous. Outraged members of Congress walked out on the Washington D.C. premiere.  Senator Alban Barkley, Harry Truman’s future Vice-President called it “as grotesque as anything I have ever seen” (Dewy 195) but when it was a runaway hit, Destry was rushed into release only five weeks later.

Marlene Dietrich, recently labeled “box office poison” after a series of sophisticated, but unsuccessful films at Paramount, was living in France, and thought she was finished in Hollywood.  Pasternak, another German expatriate, suggested doing this Western, but he saw it as closer to her roots as a theatrical performer than might be visible at first glance.  A wide open saloon in the Wild West of the 1880s had a lot in common with a 1920s Berlin cabaret, with the bawdy sex and strong female in command of her image, as well as the town’s men, much like Lola Lola in The Blue Angel.  Both Dietrich and her producer were fans of German author Karl May, who wrote novels set in the American Wild West, although a Wild West that Americans might not recognize. Pasternak said, after reading May’s The Black Mustang, “I wanted to take the first boat over here and be a cowboy.” Dietrich agreed, “So did I.  And, now I am in a Western, at last” (Gehring 66).  In a recent New York Times interview, even Arnold Swartzenegger said that May’s novels had him dreaming of America. 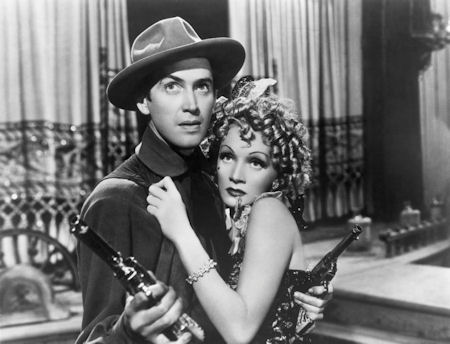 Pasternak also proposed it as a sort of role reversal, with Stewart seemingly as meek and mild as the female lead had been in the Tom Mix version, and Dietrich rough, tough and in control.  She also needed the $75,000 salary, 1/6 of what she was making at her former studio, although reportedly most of the salary went for bribes and fares for friends to escape from a Germany which would soon be at war.

Universal sweetened the pot for Marlene by hiring a number of German artists to craft her character.  Frederick Hollander, who gave her a signature song, “Falling in Love Again” in The Blue Angel, wrote “See What the Boys in the Back Room Will Have” with Frank Loesser, which she sang in rowdy style. This would become another song she would sing throughout her career. The script was written by Felix Jackson, formerly Joachimshon.  These German artists would succeed in “Americanizing” the image of that once exotic hot house bloom, Marlene Dietrich. 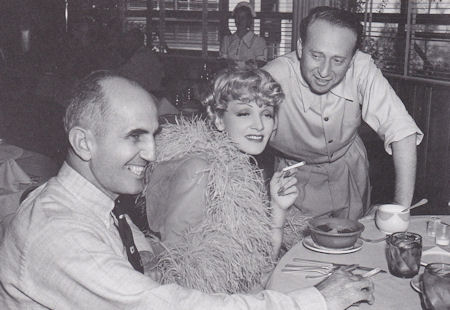 Although Dietrich, well known for her amorous affairs with both men and women was involved with novelist Erich Maria Remarque, and the fan magazines had Stewart practically married to Olivia de Havilland, Dietrich and Stewart conducted a passionate affair on the sets of Destry, and for a while afterwards.  Stewart was a big fan of Flash Gordon comics, and Dietrich had the studio art department make him a life size Flash Gordon doll as a gift.  He, in return, gave her a copy of John O’Hara’s Butterfield 8.  According to many biographers, she became pregnant, but when Stewart did not profess his desire for any sort of a permanent arrangement, she terminated the pregnancy.  Movie stars did not have babies out of wedlock in the 1930s.

There had been comic Westerns before Destry Rides Again, but they had always centered on character comedians, like Buster Keaton in Go West, or Laurel and Hardy in Way Out West.  Destry mixes comedy and drama within the classic “cleaning up the town” genre of Western. It highlights role reversal, not just with the male and female leads, but making the classic barroom brawl between women, instead of men.

The most famous scene in the film was a raucous fight between Dietrich and Una Merkel.  George Marshall said, “Let it rip” and Merkel recalled: “Neither of us knew what we were doing.  We just plunged in and punched and slapped and kicked for all we were worth.  They never did call in the stunt girls.  Marlene stepped on my feet with her French heels.  The toenails never grew back. She was stronger than me.  She was very powerful, and I was very thin.  Luckily I have a remarkable constitution.  I was bruised from head to foot when it was over.  I looked like an old peach, green with brown spots.  And, I felt like one, too.  At the end of the scene, Jimmy Stewart came in and dumped a whole bucket of water over us.  He did it in long shot.  Then he had to do it over for close-ups.  Then Life Magazine wanted pictures, so they did it over again.  He dumped water on us for hours” (Pickard 38).

That bucket of water would forever wash away the taint of “box office poison.”  Dietrich said, “To think that after all these years, it was a brawl, and not a love scene that took me right to the top and kept me there” (Frewin 94). 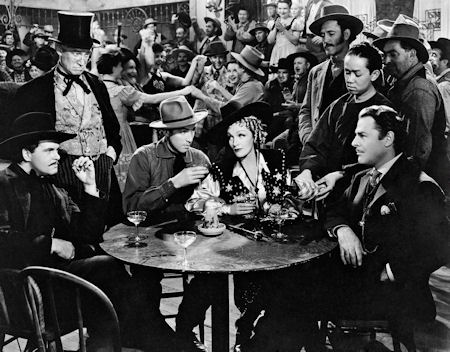 Stewart’s reviews were even better for Destry than they had been for Mr. Smith, with NY Times’ curmudgeon Bosley Crowther saying the part “was a masterpiece of underplaying in a deliberately sardonic vein—the freshest, most offbeat characterization that this popular actor ever played.  It was, in my mind, even better than the rampant young senator…” (Dewey 203).

I don’t show a lot of Westerns in my series here at the NCMA, because I am not terribly fond of them.  As a peace loving person, I don’t think most disputes are best settled with a gun, certainly not when Native Americans are involved.  A lot of the genre seems as politically incorrect to me as any film in which an actor dons blackface.  Destry does not think law and order needs a gun to enforce it, but next week, in Winchester 73, we see the other side of the coin, as Stewart plays a man obsessed with one particular, life-changing weapon.

Destry Rides Again was filmed as war was encroaching on Europe. The hero arrives, in peace, without a gun.  His father had cleaned up the town of Bottleneck a generation before, but now, it needs the help of another Destry.  Dietrich, although called Frenchy, evokes a previous war with Germany. The US struggled with isolationism in the face of another conflict, much as Destry weighs how much to get involved, while facing the outrage of justice seeking townspeople.  To audiences of 1939, the parallels between what would become WWII and the conflict in this film were inescapable.