The doomed love between Devdas (Shah Rukh Khan) and his childhood sweetheart, Paro (Aishwarya Rai) and a beautiful courtesan’s (Madhuri Dixit) unrequited love for Devdas is recounted in an epic period romance. This classic of early 20th century Bengali literature echoes stories from Hindu mythology, and with its hero and heroines yearning across class and caste barriers, it is as well-known in India as Romeo and Juliet in the West. Director Sanjay Leela Bhansali created a lush fantasy setting in the studio, reminiscent of the glory days of the MGM musical. The most expensive film ever made in India is a pleasure best enjoyed on the big screen. A stunning score highlights Rai and Dixit’s superb classically derived dancing. Khan is an unabashedly emotional actor in a decidedly non-Hollywood style and his self-destructive misery as Devdas dominates the gorgeous, irony-free, non-CGI spectacle of the sort that Western film has largely abandoned.

A poem by Moviediva, jr.

It was July of 2002
School was out
My dad was out as well,
Out of town

It was a spectacle of color
The color was tremendous, as
Soon as there was no other possible
Color in the universe, another appeared:

Then in a whirl of color and emotions
It was over. I sat shaking
With a jacket dripping wet with tears
Over the heroes hideous fate

My mind was buzzing
It was dizzily, spinning
With the information it would
Take a life time to understand

I staggered out of the theater
With my mom as wet as I
We sat in silence on the drive home
Our first Bollywood movie. 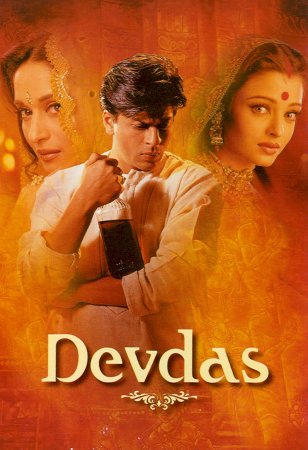