Poor Katey has to move to Havana, Cuba, and live with her family in a fancy hotel, while her daddy flogs Fords to the locals.  But, it’s November, 1958, and Revolution is brewing.  She loves dancing with dreamy waiter Javier, but will Castro toss all the gringos out before they can compete in the big Latin Ballroom contest?  “I’ll admit it if you will.  “Dirty Dancing: Havana Nights” is a pelvis-gyrating, ponytail-releasing, shirt-unbuttoning good time” (Chicago Tribune).

Happy April Fool’s Day! For the last film in our dance series, I chose one for its fun quotient.  I almost programmed Footloose, which, among all the 1980s dance movies has really held up well, and the plea for understanding the desires of randy teens has a contemporary currency.  Others in this category don’t fare so well.

People love Dirty Dancing with Patrick Swayze and Jennifer Grey, filmed in part, at Lake Lure in the North Carolina mountains.  But, as a parent, I cannot endorse 16 year old Baby’s infatuation with the sleazy dance instructor twice her age, no matter how hot he is.  There’s a hilarious French movie called Heartbreaker, with Romain Durais, who was in Populaire, which we showed last year, in which he plays someone hired by disgruntled third parties to break up romances.  One of his targets is obsessed with Dirty Dancing, and he worms his way into her affection by pretending to be enamored of the same film, to the extent of learning the signature dance routine.

Flashdance is another film popular in its day, about an 18 year old welder and modern dancer who yearns for a life on stage.  Again, there is a creepy older man, and her sexual precocity at such a young age screams out that she was sexually abused as a child and only knows how to gain approval by being seductive.  Sorry, I’ll pass on that one, too.

On my radio show, we talked about food movies, and how tasting someone else’s food is a way of sharing culture.  This series of ballroom dance movies has a similar inspiration.  In three of the four of these competition films, the exuberance and passion of Latin dance allow the protagonists to step outside of their comfort zones.  Where once African-American culture was intriguing to adventurous dancers (see Hairspray, for example) these films embrace flamenco, rhumba and salsa, much as the 1940s films which were propaganda for the Good Neighbor Policy, and the arrival in the US of Cuban musicians Machito, Perez Prado and Desi Arnaz. Snicker if you will, but Arnaz had a very hot Latin swing band in the 1940s.

You will be surprised to learn, as I was, that the film was based on an original screenplay by the NPR show Wait, Wait Don’t Tell Me’s host Peter Sagal. In his previous career, he was a playwrite. “A Hollywood producer called me and asked me to write a screenplay based on the life of a teenage American girl named JoAnn Jansen. Her father was transferred to Havana in 1958—they moved just in time for the Cuban revolution. I started with that idea. I interviewed a guy who photographed [Fidel] Castro for Life magazine; I talked to the people who were there and I read a lot of books. I thought it was really interesting; I learned a lot about the Cuban revolution I didn’t know” (Mental Floss).

Sagal wrote a serious, political drama, in which the heroine falls in love with a revolutionary.  Producer Lawrence Bender had been trying for years to make a sequel to the original Dirty Dancing, but as Sagal quipped , it was tough to craft, since obviously Baby became a lawyer and never saw the Patrick Swayze character again, who would just go on harassing guests at the resort (NPR).  Harvey Weinstein, who owned the rights to Dirty Dancing, suggested to Bender that he had already paid for this Cuba script, and he should just put in some dancing.  Sagal was told that “today’s audience just wants to have some dancing and sexy fun, and does not want to hear about the flaws of the Batista regime” (NPR).  Sagal rewrote and rewrote, trying to make it what they wanted and finally gave up.  He was shocked to hear four years later that the film was being made.  “The movie was completely rewritten, there’s not a line of dialog that I wrote. But they used my basic story and there are certain things in the movie, mainly the beginning and end, that I came up with. The Writer’s Guild decided that I would get half the story credit. I have no complaints about what they did. It’s the business and I’m delighted to have been a part of it” (Mental Floss).  It does account for the oddly political backdrop to what is essentially a coming of age romance. Sagal was grateful that his Writer’s Guild minimum wage qualified him for the health insurance that paid for the birth of his daughter, which is what he thinks of when he sees the film.

It stars Romola Garai, who I love in BBC productions like Daniel Deronda and The Hour.  She was only 22 when she made this film, languishing for five months in Puerto Rico, standing in for Havana, while being hassled for being a healthy and attractive 135 lbs.  She had her first role while still in school, and eventually left the University of London to star in I Capture the Castle.  She’s serious about her craft, but uninterested in the trappings of stardom “I’d like this to be my job,” she nods firmly, “but not feel that it’s my life.”

The cast has other fun people, Sela Ward, and John Slattery and January Jones from Mad Men.  Diego Luna has been in both English and Spanish language films and tv shows, Y Tu Mama Tambien, Frida and Milk.

I was surprised and delighted at the large and enthusiastic audience at the North Carolina Museum of Art! One person asked me about the dancing, surely they didn’t dance like that in Cuba in 1958. One of the producers of the film, the choreographer, and the dance partner of the super secret cameo dance instructor is JoAnn Jansen, on whose life the film is (kinda) based. So, maybe, yes? I’m pretty sure they didn’t dance to “Hips Don’t Lie” by Shakira, though.

Well, I have no excuses for programming this silly film.  The print we received was a wreck. The reels were out of order, and some had a leader spliced on from another film. Clearly, the print was torn off a platter in 2004, hastily put into storage, and not touched since then. The North Carolina Museum of Art is in the vanguard of this revival. We’re all a little bit interested in going to Cuba right now, aren’t we? A friend of mine went on a cultural exchange a few years ago. She’s an avid salsa dancer, and in one club, an old Cuban man asked her to dance. She posted the video, and her joy at dancing with a man who had the music in his bones was amazing. It was her own personal Dirty Dancing: Havana Nights.  Isn’t that what we all hope will happen when we visit Cuba?  Baile! Baile! 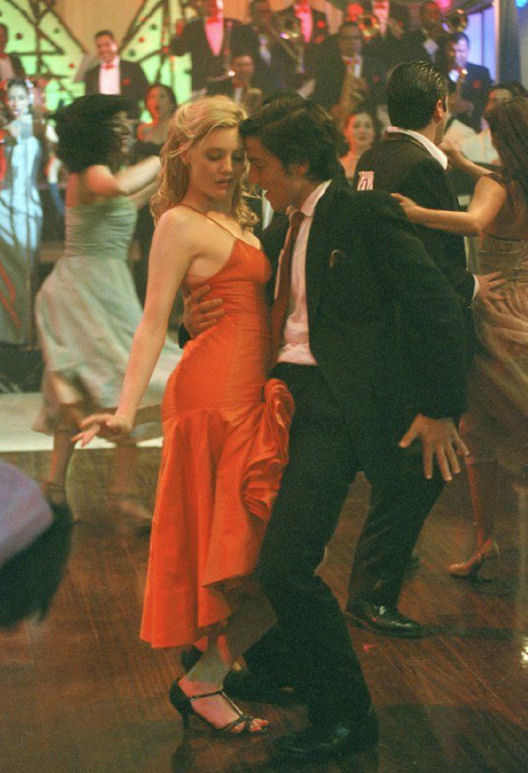