During a scorching summer, a dissolute baron, living in a wing of the crumbling family palazzo, disdains the cloying warmth of his wife’s affection and lusts after his dewy cousin. Marcello Mastroianni was nominated for an Oscar, the screenplay won. “It remains a terrific entertainment, a European corollary to Preston Sturges” Chicago Reader.

The decade of roughly 1958-1968 is regarded by some as the Golden Age of Italian Cinema.  Directors like Fellini, Antonioni and Visconti made “art” films, and their international popularity brought both critical attention and vast profits to Italian studios.  La Dolce Vita was widely seen and universally praised, and stars like Marcello Mastrioanni, Sophia Loren, Monica Vitti and Claudia Cardinale gained global celebrity. In this period, commedia all’Italiana was the most popular film genre in Italy, although some serious filmmakers disapproved of the entertainment that deflected attention from serious social issues.  But Divorce, Italian Style had some sharp satiric points to make, that divorce (illegal in Italy until 1970, only two European countries waited longer) was taken much more seriously by both the law and the church than a murderous crime of passion. The precise law cited in the film, 587, was not repealed in Italy until 1981.  Italy was slow to change the legal code from the Fascist edicts of the WWII era, and it took feminist activists to change the environment which would allow legalized divorce to become possible.  Divorce, Italian Style did actually contribute to the discussion, as was director Pietro Germi’s intention.

The film is set in the present day (1961) “although one of the film’s operative ironies is the oxymoron implied by the very phrase ‘modern day Sicily’” (Rhodes 113). The backwardness of Southern Italy is used as an indication of the sluggish pace of change in the whole country, perhaps the way the Southern United States is sometimes used towards the same ends. Germi used a comedic canvas to examine marriage, patriarchal society and male and female roles in an isolated small town, the whole of Italian society dissected under the lens of family relationships. He uses his neorealist experience to bring a comedic lens to serious societal problems. 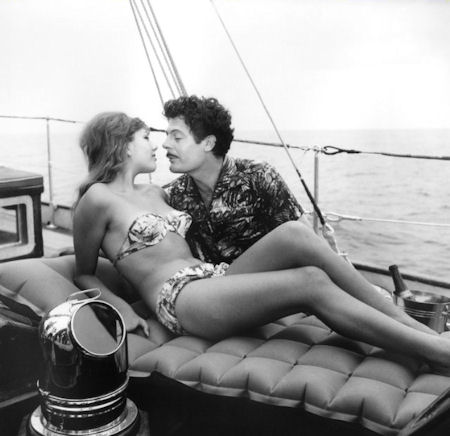 “As the screenplay slowly took shape and the film got its tone, we realized that the really comic side would always suffocate the tragic aspect, so it was only natural to pick a grotesque vein, the only one really possible for these incredible stories of “crimes of honor.” It is sad that they lead to blood and mourning; but all the rest, the thoughts, acts and facts that lie behind and around the crime are absolutely foolish, ridiculous” said Germi (Lanzoni 106).

The male-dominated, insular culture is portrayed as laughable, and the sanctity of marriage presented as non-existent as the hypocritical men philander, or plan to, under the glare of their families and neighbors. As in many repressive societies in many conservative religions, a woman’s “purity” is central to male honor and family sanctity.  The fact that the men constantly seek to undermine female virtue is perceived as irrelevant.  The townspeople are confined by peer pressure, constant spying by their neighbors and a fever of repressed sexuality, initiated by the men, but certainly endorsed by the women. Mastrioanni’s deft characterization of Fefé, a preening dandy who believes his aristocratic privilege grants him the power to fulfill his amorous whims, focuses the attention of the entire town on imagined intrigues.

“The film stresses the controlling dimensions of the townspeople’s observing the family drama, as well as their judgmental role in determining the extent of the ‘crime’ and its ‘punishment.’ The emphasis of spectatorship illuminated the double standard that determines distinctions between public appearances and permissible private peccadilloes.  Though it is possible to violate sexual codes, such a transgression must remain secret: once it becomes known, judgment must follow” (Landy 221).  This is parallel to the way a movie audience observes what happens on the screen and judges, as a comparison is drawn between the townspeople’s stunned reaction while seeing the film La Dolce Vita (starring, of course, Mastrioanni).

Pietro Germi, like many directors of his generation (he was born in 1914) first made films in the neorealist style, after studying acting and directing in Rome.  His early films dealt with social problems faced by people with Sicilian heritage.  In nom della legge (In the Name of the Law) was about the Sicilian mafia, and Il cammino della speranza (The Path of Hope) followed a group of Sicilian laborers searching for work in France, and acknowledged the narrative patterns of the American Western, particularly those of John Ford. Germi’s films were admired by Billy Wilder, who must have felt some affinity with the black comedy of Divorzio all’italiana. Divorce, Italian Style was Germi’s first comedy, and he was nominated for Oscars both for writing and directing, as was Mastrioanni for acting; the film won for Best Original Screenplay all honors unusual for a non-English film.

Germi didn’t want Mastrioanni for the role, he thought he was a lazy Latin lover, happy to hang out on the Via Veneto, and not serious about his work (this was the image that Fellini perpetuated of his alter-ego at the time he filmed 8 ½ and La Dolce Vita. But other actors turned Germi down, since he had only made dramas before.  Fellini later corrected his impression of Mastrioanni:  ”He spends hours discussing his role until he thoroughly understands it, extracting the most extraordinary nuances. When he has it inside him, and he trusts his director, we can get what we’re really after: a look at the inner reality of life” (New York Times). Mastrioanni said in an interview, “If an actor is casual and say, like I do, that his profession is fun, people make light of him.”  He did not like being tagged a Latin Lover, calling it “a crazy, stupid idea.  It cheapens me, too.”

Mastrioanni was born in 1924 in a small town 50 miles south of Rome.  His family was poor, his father a cabinet maker.  Mastrioanni became a movie extra at 12, since a family friend owned a restaurant at Cinecittá and got him onto the lot.  He studied to be a surveyor, with hopes of moving onto architecture. During WWII he drew maps for Mussolini’s retreating armies.  After the war, he joined Visconti’s theater troupe, where stayed for 10 years, meeting both Federico Fellini, and his wife, Giulietta Masina.  He married Flora Carabella, a colleague, in 1948, with whom he had a daughter, Barbara.  But that did not stop him from having well-publicized affairs with many of his beautiful co-stars, particularly Catherine Deneuve, with whom he had a second daughter, Chiara. He made over 120 films and found his greatest critical success in the existential crises of Fellini and Antonioni.  He co-starred in 12 films with Sophia Loren, who “alternately married, divorced, seduced and pined after him” (New York Times), and with whom he had an easy on-screen rapport.  He died, of pancreatic cancer, at the age of 72, having never won an Oscar.  He was mourned from the highest levels of government to the waiters in restaurants near his Roman apartment.  The Eternal City dimmed the lights and turned off the water at the Trevi Fountain, where he and Anita Ekberg had a memorable dip in La Dolce Vita. 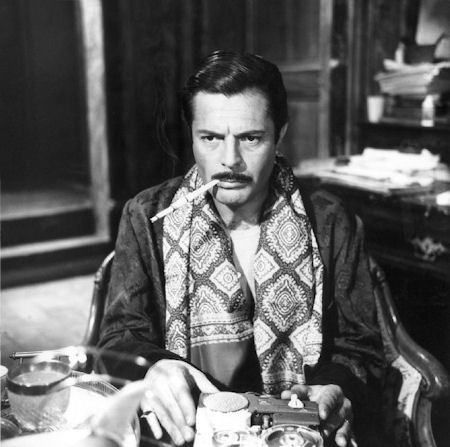 He did not want to play a traditional hero, and his character in this film is certainly not very admirable.  He preferred parts, “in which the complications of life, its drudgery, its pitfalls, are accepted with compassion and simplicity.  I don’t want to sound pretentious, but I actually prefer characters with certain limits, with weaknesses, not winners.  This corresponds to my own character…real people are much more ambiguous, much more complicated than the saints and John Waynes of this world…” (156 Cardullo, etc.)

“What makes it funny as a film comedy is also what makes it serious as a political intervention…singular in its success at so deftly marrying tradition to innovation, humor to seriousness and pleasure to politics” (Rhodes 120). 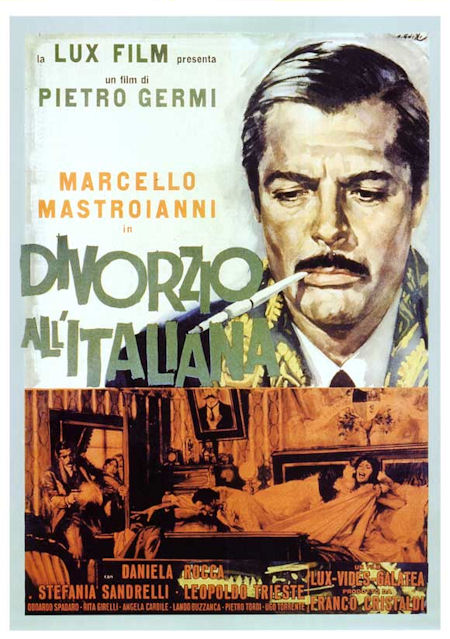