A dreary, haunted Venice holds uneasy secrets, in a film that begins with the ultimate horror, the death of a child.  A shiny red raincoat signals all is not as it should be, and ominous signs dapple an art restorer’s crumbling marriage. Adapted from a chilling story by Daphne du Maurier, “Nicolas Roeg’s 1973 film remains one of the great horror masterpieces, working not with fright, which is easy, but with dread, grief and apprehension” (Roger Ebert).

Don’t Look Now was voted the greatest British film of all time by a panel of Time Out magazine film experts, acknowledging a maverick director whose career on top was brief, but indelible, courtesy of Performance, Walkabout, Don’t Look Now, The Man Who Fell to Earth and a handful of lesser acclaimed films.  Roeg is considered the greatest living British director, yet he has never been a commercial director, as his films occupy a space in between art and popular cinema. Don’t Look Now is a common entry in “best” lists of all kinds, as a literary adaptation, a supernatural thriller, an exploration of marriage and grief; a film once seen, impossible to forget.

It’s is based on a short story by Daphne du Maurier, author of Rebecca, My Cousin Rachel, Frenchman’s Creek and the story on which Alfred Hitchcock based The Birds.  Although the film is a fairly close adaptation of the story, the screen can do something which may be harder on the page, establish from the very beginning two of the themes that will weave throughout the story, the importance of water and the dominance of the color red.  Red was also a strong symbolic presence in three of Roeg’s films as cinematographer, Masque of the Red Death, Fahrenheit 451, and Far From the Madding Crowd.  In the story, du Maurier is finely attuned to noises, reflected in the movie’s complex sound design, and she often uses the word “glittering” which is indicated by shots of light on reflective surfaces.  Authors often are pained by seeing their work on screen, but du Maurier wrote to Roeg to tell him he had perfectly captured the emotions of John and Laura.

The atmosphere here is described in the invaluable BFI guide to the film as “Gothic” a reference to the original Gothic novel, Horace Walpole’s The Castle of Otranto. Gothic became a catch-all term for “bizarre goings-on in the novel: ghosts, sinister statues, strange visions and uncontrollable passions—love, agony and despair—suffered against a backdrop of graveyards, subterranean chambers and ruins.  The secret stuff of nightmares was splattered across the page with panache.  Fictional fear became highly fashionable” (Sanderson 28). Gothic novels also aim to evoke the fear of death. The Baxters think they are running away from their traumatic experience, but instead are running headlong towards another. 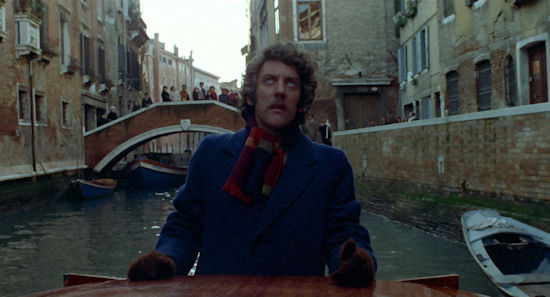 Don’t Look Now like Fahrenheit 451, on which Roeg was cinematographer, is full of Hitchcockian moments, in part because Hitchcock’s unique touches make his works ripe for little homages. Truffaut’s film was made just after his book length interview with Hitchcock had been published.  Roeg’s nods to the elder British director occur because of Hitchcock’s indelible mark on the psychological thriller.

Natalie Wood and Robert Wagner were first proposed for the leading roles, although Roeg had Christie and Sutherland in mind from the beginning.  Christie was busy campaigning for George McGovern in the US presidential election, and Sutherland was about to start shooting another film.  When both projects fell through, (Nixon was elected and Sutherland’s movie evaporated) they were cast in the roles.  At first, Sutherland was hoping for a bit of a more positive view of ESP, but Roeg countered that it was not what the film was about.  The otherworldly never seems very far away; especially as channeled by two strange sisters. Laura Baxter believes in psychic powers, yet it is her husband who seems to possess them.

Christie had worked with Roeg both on Fahrenheit 451 and Far From the Madding Crowd.  “Nic has an unusual eye and an unusual mind.  As a director he is quite secretive, not enormously collaborative, but this is the way he succeeds.  The whole film could have gone completely haywire, it was a bit of a risk, but I don’t like run-of-the-mill stuff.  In any event, the risk paid off” (Sanderson 23).

Filming in Venice lasted six cold and damp, wintery weeks in January-February of 1973. Christie remembered accompanying  Roeg as he searched for locations.  “I remember walking through Venice at night with Nic and Tony, the photographer.  We…wandered through all these mysterious, damp alleyways looking at the reflection of the water on the wet stone and the reflection of the buildings in the canals”  Sanderson 23).  Filming was difficult.  The rhythm of the tides made continuity between shots difficult, and at high tide, the equipment couldn’t fit under the bridges, so timing was critical.  Roeg wanted to avoid anything that smacked of a tourist film, or travelogue; indeed, few will be inspired to travel to Venice when it is used in such an ominous manner.  The echo-y shadows of damp alleyways make individuals seem impossibly isolated, and then unexpectedly give way to light and life.  Many of the films I screened before I programmed this series have similar sequences, apparently a common experience for visitors to the city. 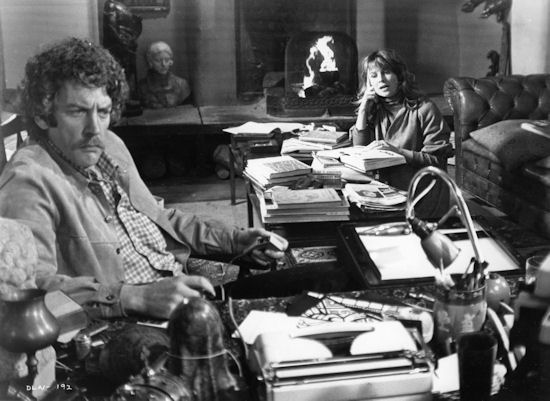 The love scene was frank for its day, and was given an X (adults only) rating in England.  American censors wanted to make sure there was no tell tale “rising and falling” to indicate what was occurring, which luckily could be repaired by the removal of 9 frames of film.  The scene was not meant to show mere lust and eroticism, but the intimacy of a long term couple, stressed by the way it’s intercut with their dressing for dinner, another intimate scene of shared experience.  And yes, it remains a frank and sensual scene, even by the standards more than 40 years later. Christie and Sutherland’s rapport throughout the film is natural and unforced, David Thomson finds it to be a career best performance for each of them.

“While maintaining its strong narrative line with several heart-stopping sequences, Don’t Look Now is replete with such original moments, true to Roeg’s ethos of remaining open to the happy accidents that occur in filming, so that the meeting of life and celluloid becomes a dialogue, not a prescription. The result is an outstandingly rich film that—for a genre that is usually all about explaining a mystery away—can chill and surprise on repeated viewings. Roeg boldly demonstrates that psychic phenomena need not be the stuff of fantasy but can be rooted in the life experiences we all share—birth, sex, and death. Everything is connected” (Thompson).

I don’t often show scary films, because I, myself am pretty easily scared.  But, if you ask people about movies set in Venice, this one is always at the top of the list. Although I remembered being disquieted to such an extent when it first played theaters, I was not sure than I wanted to revisit the film. But seeing it again, knowing what will happen, allows you to appreciate Roeg’s extremely artful evocation of the uncanny. 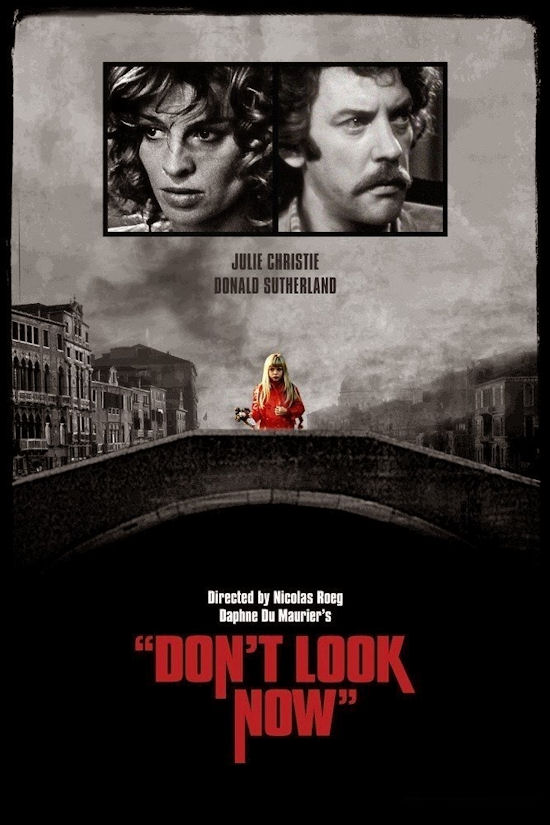 Don’t Look Now: BFI Film Classic by Mark Sanderson, The Films of Nicolas Roeg: Myth and Mind, Horror Films of the 1970s by John Kenneth Muir, Classic Horror Films and the Literature That Inspired Them by Ron Backer, “Beneath the Surface” by Andrew Patch in Don’t Look Now: British Cinema in the 1970s edited by Paul Newland, David Thompson on criterion.com https://www.criterion.com/current/posts/3460-don-t-look-now-seeing-red