A deranged general obsessed with the corruption of his precious bodily fluids single handedly launches a nuclear Holocaust. And, it’s a comedy! This ferocious Cold War era satire has, unfortunately, never become dated. Kubrick immersed himself in books and journals on nuclear strategy to produce this outrageous parable about sex and death. “What the wacky characters in Dr. Strangelove are saying is precisely what needs to be said; this nightmare eventuality we have concocted for our children is nothing but a crazy fantasy, by nature as horribly crippled and dehumanized as Dr. Strangelove himself.” (Lewis Mumford, 1964).

“When Ronald Reagan became President, one of the first things he asked to see was the War Room, and somebody had to say ‘Well’ He had expected the one from Dr. Strangelove.” Or so said Production Designer Ken Adam. His creation, centered by a glowing ring like the one that vivified the Robot Maria in Fritz Lang’s Metropolis, is one of cinema’s most distinctive sets. Although Armageddon is no longer contained between the covers of a three-ring notebook as it was 40 years ago, Reagan’s misapprehension indicates the persuasive reality of Dr. Strangelove.

Director Stanley Kubrick had been subscribing to the journals Nuclear Tactics, Aviation Week, and the Bulletin of Atomic Scientists since the 1950s. His avowed source material was a thriller called Two Hours to Midnight in Britain, (Red Alert in the US) and published under a pseudonym by RAF officer Peter George. In the novel, a dying, insane American general orders an unprovoked attack on the Soviet Union, and the President is forced to offer to annihilate Atlantic City as tit for tat. In 1964, the Cold War was at its hottest. Berlin Wall tensions simmered and the superpowers jockeyed over the debris of the failed Bay of Pigs invasion. Kennedy had just been assassinated. As Kubrick worked on the script, the tone shifted away from seriousness and more and more to that of a “nightmare comedy.” Kubrick said, “After a month or so, I began to realize that all the things I was throwing out were the things that were the most truthful. After all, what could be more absurd that the very idea of 2 mega-powers willing to wipe out all human life because of an accident, spiced up by political difference that will seem as meaningless to people in a hundred years from now as the theological conflicts of the Middle Ages seem to us today?” (Starr).

Kubrick summarized, “Confront a man in his office with a nuclear alarm, and you have a documentary. If the news reaches him in his living room, you have a drama. If it catches him in the lavatory, the result is comedy.”

The film occurs in approximately real time in three basic settings, designed by Adam, who also designed the early James Bond films. The low ceilinged sets were lit by available light, and the cast wore body mikes. Intervals of hand-held camera work heightened the documentary feel. While the War Room was a flight of fancy, the B-52 flight deck was based on a single official still, carelessly published in a British flying magazine. It gave the Pentagon quite a turn when they saw a $100,000 set replica of a top-secret military plane’s interior.

Dr. Strangelove is infused with the comic genius of Peter Sellers, here at the height of his powers. He plays three parts, the US President (resembling Democratic Presidential candidate Adlai Stevenson) an RAF officer and, of course, Dr. Strangelove, himself. There had been discussion of his doing the characters played eventually by Slim Pickens and George C. Scott, but it was agreed Sellers should concentrate on the three. At first, the President was played as somewhat effeminate, but the scenes were reshot to show him as an oasis of reason in a desert of madness. Kubrick was always ready to accommodate Sellers’ sudden improvisations. In the President’s phone call to the Russian premiere, he’d ad libbed, “Well, how do you think I feel?” Both Kubrick and Sellers denied that Dr.Strangelove was inspired by Henry Kissinger. Sellers said, “Strangelove was never modeled after Kissinger, that’s popular misconception. He was always Wernher Von Braun. But the one gloved hand that kept rising to salute, well, the man was a Nazi. That idea just came to me, it was entirely spontaneous. And Stanley stopped everything and shot the gesture with three cameras.” (Starr). 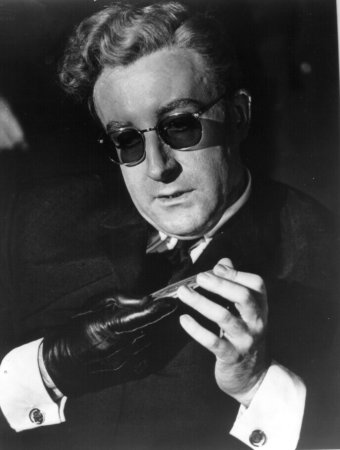 “Kubrick spoke of how he became struck by people’s virtual listless acquiescence in the possibility–in fact the increasing probability–of nuclear war by either design or accident. Dr. Strangelove was undertaken with the conscious aim of sounding an alert that would startle people into a response and even resistance to such a fate. And, laughter, not for the first time was the device selected to penetrate the sound proofing of the paralyzed will.” (Walker). Kubrick and Sellers shared the conviction that power figures are impotent in one way or another, and riffed on the motif of sexual panic motivating deadly military strategy. The original ending was to have been a food fight at the buffet table. The footage was shot, but was clearly out of sync with the rest of the film and the conclusion rethought. Fail-Safe, a serious film on the same topic, was thought to be a box-office threat, but turned out not to be, and is not revived nearly as often as its comedic counterpart. My Fair Lady swept the Oscars that year; Dr. Strangelove won exactly zero Academy Awards.

As India and Pakistan edge up to a nuclear face off, and volatile Middle East situation seems stymied, this film remains depressingly topical. “Dr Strangelove is one of those rare films that show no sign of inventiveness running down. It keeps pumping grotesque energy to the surface like an oil gusher” (Walker). If only it were mandatory viewing for our cowboy-hatted president.