When European and American silent films first came to Japan they were difficult for audiences to understand. This was both because the intertitles weren’t always translated but also because they were culturally opaque. A tradition arose where benshis; storytellers, interpreted the films for the audiences. They supplied plot, character, song, commentary and sound effects for films. Perhaps they themselves did not fully understand what they saw on the screen, and sometimes they used the film as an inspiration for their own poetical flights of fancy. These benshis developed devoted followings, and people would come to see their favorite benshi, rather than a particular film or a favorite actor. The practice continued long after Japan began their own national film industry. Benshis were so popular that indigenous silent film lingered in Japan years after other countries converted to sound.

El Automovil Gris is likely the most important film made in Mexico prior to 1920 and is one of the few surviving Mexican silents. It synthesizes many elements popular in international cinema; from the Italian historical epics, like Cabiria, and the American equivalent, especially Intolerance, along with the popular French crime serials, like Les Vampires. El Auto was originally a 12 chapter serial, and now survives in a version edited down to about 90 minutes. In the earliest days, serials did not have cliff-hanger endings, but were a series of self-contained episodes. Few characters would continue throughout the entire extended storyline. This extant version of El Auto has few intertitles (although I know of someone who saw another, elusive, version with such long and complicated subtitles that the Spanish translator finally gave up). The film was so popular that it was edited, and sound–improvised voices–added on two separate occasions in the 1930s and 40s. The initial audience was quite familiar with the story of the Grey Automobile Gang. Because the film was considerably longer, and much exposition was edited out, be advised the Gang wears military uniforms and gain entrance to the homes of wealthy residents with false search warrants. 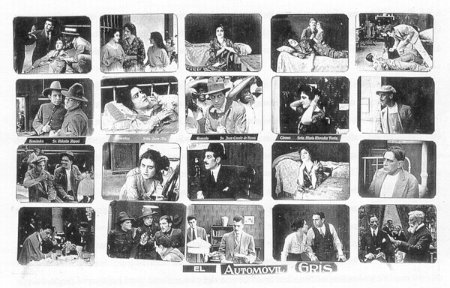 This montage of lobby cards is from a Spanish language history of Mexican cinema. Few of these scenes appear in the exisiting version.

There are both professional and non-professional actors in each scene, resulting in discordant performance styles. Juan Manuel Cabrera, the lead detective on the case, plays himself, and is a co-writer of the film. Many of the thefts were filmed at the actual crime scenes, and the victims also play themselves. There is a fusion of melodrama and documentary, never more extreme as in the intensely emotional reinactment of the hours prior to the Gang’s excecution, followed by actual footage of the Gang being shot by a firing squad filmed by the director of the fiction film, Enrique Rosas. Valdés Kuri explained that since the Mexican silent film tradition grew out of films made about the Revolution, contemporary audiences were quite used to this morbid cinema verité. Rosas filmed the excecution first, and then later recreated the crimes to frame his documentary footage. While this ultimate scene is disturbing to modern eyes, the “crime does not pay” moral was vital in order for the film’s earlier glamorization of the Grey Automobile Gang’s crimes to pass the censors.

Claudio Valdés Kuri’s North Carolina production begins with an evocation of the traditional benshi style, performed in Japanese by Irene Akiko Iida. As the different episodes evolve, so does the interpretation. Pianist Ernesto Gomez Santana provides a musical interpretation of the proceedings, and he is joined by actor Enrique Arreola, who soon begins his narrative in Spanish. There are new subititles on the screen, both in English and Spanish and sometimes in nonsense. During a (theoretical) reel change, the two actors perform a charming song. Sometimes the subtitles make sense, and sometimes not. Sometimes the language is comprehensible, sometimes not. Unexpected juxtapositions create new meanings. Valdés Kuri explores different ways to illuminate and interpret both history and historical styles of entertainment. This is not a reverent view, but one enlivened by the director’s playful sense of humor, so silent film purists may feel a little uneasy with this post-modern interpretation..

Old movies do contain mysteries. Just as when you watch any silent film, you must supply the voices and emotions of the characters through your imagination, so the director, through a variety of techniques, asks you to look at El Automovil Gris in novel ways. Or, as Baz Luhrman said when talking about his new interpretation of La Boheme: “Stories never change. The way we tell them must change, so that we can reenliven the eyes and ears of the audience.” 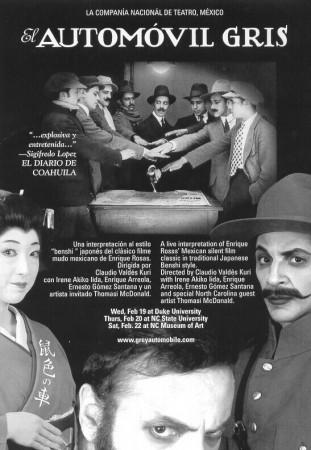 A scene from the film on top, and Iida, Santana and Arreola from left to right.