Department Store Girls–This is your picture, about your lives and your problems! See what happens in department store aisles and offices after closing hours! Girls who couldn’t have been touched with a 100-ft yacht–ready to do anything to get a job! Beautiful models who whisper their dread of the “Boss” who can “make” or break more women than a sultan!– Advertising copy for Employees’ Entrance

A ruthless department store executive imposes his “smash or be smashed” credo on his Depression-panicked workforce. Sexual harassment is common currency and a little homoerotic subtext links the lives of a striving young couple with their fanatical workaholic boss.

The department store was an early 20th century fantasy-land, where any poor schmo could get a job and work his/her way up the ladder of success. The array of luxurious items juxtaposed with daily necessities created an environment of plentiful opulence. The Wal-Mart experience can’t compare with the ritual elegance of the trip to a downtown department store. People actually dressed up and spent the day shopping in a grandly designed retail palace. One could wander the aisles, and perhaps end up in a replica of a cozy cottage like the one where Warren William picks up broke and hungry Loretta Young.

There were many films in the 1920s and 30s set in a department store. Perhaps the most famous one was It, starring Clara Bow, who flirted madly until she caught the eye of Antonio Moreno, the store owner. Harold Lloyd scaled the side of a building in Safety Last as a store promotion, and in Our Blushing Brides, Robert Montgomery uses his position as retail heir to spy on model Joan Crawford in her scanties. One interesting difference here is that William does not own the store, he manages it. His power is not in his wealth, but in his ability to hire and fire.

Director Roy del Ruth made 10 films in 18 months of 1931-33 (including Blonde Crazy) “all worth looking at for the exposure of the raw nerves of the Great Depression.” (Doherty) America craved leadership and if Herbert Hoover couldn’t provide it, perhaps Warren William could. He “appeared in film after film as an electrifying if caddish professional whose mean exterior concealed a meaner interior. A joy to watch in action, William played men callous in character but commanding in presence, harsh dynamos with not a whit of self-doubt or common decency.” William was Warner Brothers’ “house seducer” and inexplicably, he is an actor without much of a following today. After a few silents under his real name, Warren Krech, he came to Warners in 1931 and promptly became an indispensable member of the stock company. His skill at amorally devastating charm wrecked on-screen havoc amongst the dewy studio ingenues. Today, no star would play such an unsympathetic part. The screenwriter would be forced to explain that he was doing it all for his poor old mother. 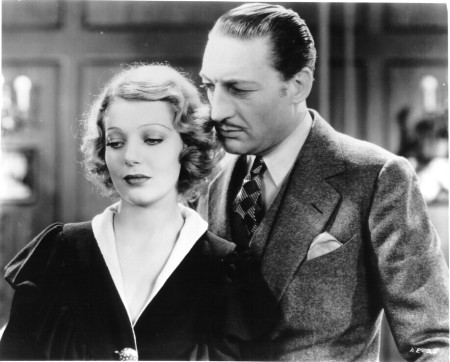 Loretta Young was one of a family of sisters who did extra work as children in the silent era. Director Mervyn Le Roy called the house one day in 1926 asking for her sister Polly Ann, but only Gretchen (her real name) was available. Small parts led to a supporting role at 14 with Lon Chaney in Laugh, Clown, Laugh. She made 36 films between her first talkie in 1929 and 1933, many for First National-Warner Brothers. These films are always slighted in her filmographies (and her own autobiography) but these nervy Pre-Code dramas are fascinating, if sometimes infuriating. Play Girl is a shrill tale of a young marriage wrecked by the husband’s compulsive gambling. She Had to Say Yes is about a stenographer pimped to department store buyers as a condition to keeping her job. The Hatchet Man is a politically incorrect story about hired killers in Chinatown, and ends with a murder as gruesome as any in current films. She may be remembered (and may wish to be remembered) for her devout Catholicism, the fines she made her co-stars pay for swearing on the set, and her more sedate roles in The Farmer’s Daughter, The Bishops’s Wife and on tv in The Loretta Young Show. But they intentionally ignore the impulsive passions of the17-year old Young who leapt into a brief, disastrous marriage with an older co-star, and the jittery intensity of these early roles. She made this film when she was barely 20. 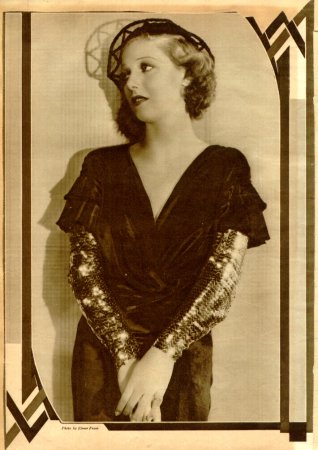 As always, seeing the film with an audience is a revelation. Viewers gasped in horror at William’s ruthless behavior, bareless supressing an urge to hiss the villain (if villain he is). Alice White’s career was on a downward slide. She’d been a star just a year or two before, but was now just a featured player. But, her flirty little tramp stole all her scenes, getting big laughs and a lot of sympathy. Orry-Kelly’s wardrobe, as always, is to die for, particularly a deeply fringed and low cut white wedding gown which Madeline models in the store, and the draped wool suit in which she is really married. 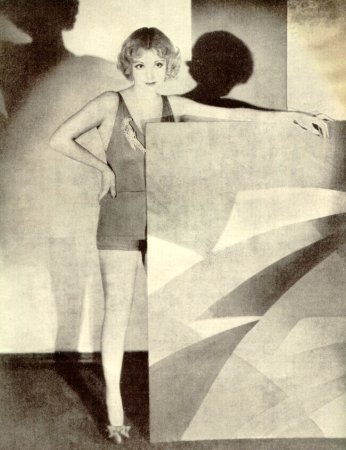 Alice White, in a futuristic setting, is a girl followed by two shadows. One is a talkie shadow, and the other is silent. First National is surrounding Alice with plenty of singing and dancing in her musical film, “Broadway Babies.”

Pre-Code refers to those films made between the dawn of the talkies and July 1, 1934, when the Hays Production Code enforced a system of self-censorship for the movies that would endure until the 1960s. What is it that makes these films so fascinating? For one thing, they were not easily seen, still banned on television when the stations started buying film libraries for broadcast. They are like a cracked mirror, reflecting a less than ideal vision of the recent past, where maybe even a nice girl had to trade sex for the price of a meal.

But first, two early Vitaphone musical shorts from 1929. Stoll, Flynn and Company is notable for the completely unadorned, one-take only sweet and hot jazz musicand the interesting personal interaction between the musicians. Many of you are familiar with wise-cracking comedy writer Sally Rogers on the old Dick Van Dyke Show, and perhaps even knew that she had been a child star. But 6 year old Baby Rose Marie, The Child Wonder is a surprisingly good jazz singer, although one can sense her stage mother hovering; Rose Marie glances off-camera now and then. In her recently published autobiography, she says this short played before Al Jolson’s debut in The Jazz Singer. He was infuriated that she might be stealing some of his thunder. But, after the premiere, he was forced to reply after her compliment to him, “You were great too, ya little runt.” Vitaphone was a process that synchronized big 78 discs with silent film run through a projector, and over the years the two elements often became separated. This short recently reunited film and disc, surprising Rose Marie herself. She was too young to remember the filming, and never thought to get a chance to see it. Having children makes you appreciate the genius of these child performers. I’ve certainly never met a kindergartener who can belt like a red hot mama.