A tyrannical fashion designer pauses in midst of frantic preparation for his seasonal collection to poach a friend’s fiancée.  Surrounded by women, but understanding nothing about them, this rediscovery by Rialto Pictures is adorned by fabulous designs of a real Parisian couturier, Marcel Rochas. Shot right at the end of the Occupation of Paris, it’s catnip for lovers of 1940s fashion.  “With its brooding, doom-laden photography, intense performances and razor sharp editing, Falbalas feels more like a film noir thriller than a conventional melodrama” (filmsdefrance.com).

I first heard about this film in an article written by Susan Orlean about the couturier Jean Paul Gaultier, in the September 26, 2011, issue of The New Yorker.  “The good thing about working for Patou, though, was that the experience mirrored Gaultier’s idea of what it would be like to work in fashion.  Like many of his notions, this one sprang from a movie, the 1945 Jacques Becker film, Fabalas…Gaultier loved the drama and the romance of the movie, and he also loved the work it described—the mansions where the couturiers worked, the ateliers staffed by legions of stern seamstresses, the precision and the detail of the work.  He has said that if he hadn’t seen Falbalas, he might not have become a designer.  The House of Patou, headquartered in a spectacular 18th century building, made he feel that he was living in his favorite film.” 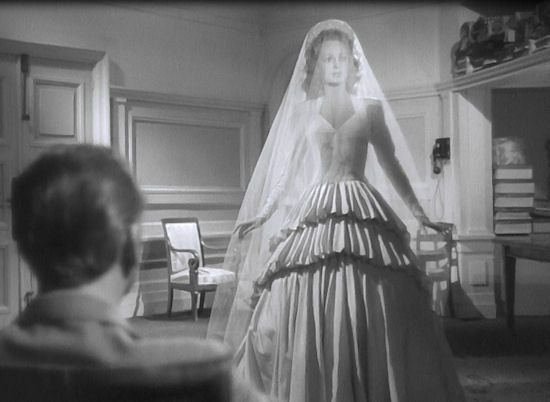 This is a screencap of a wedding gown from Falbalas. 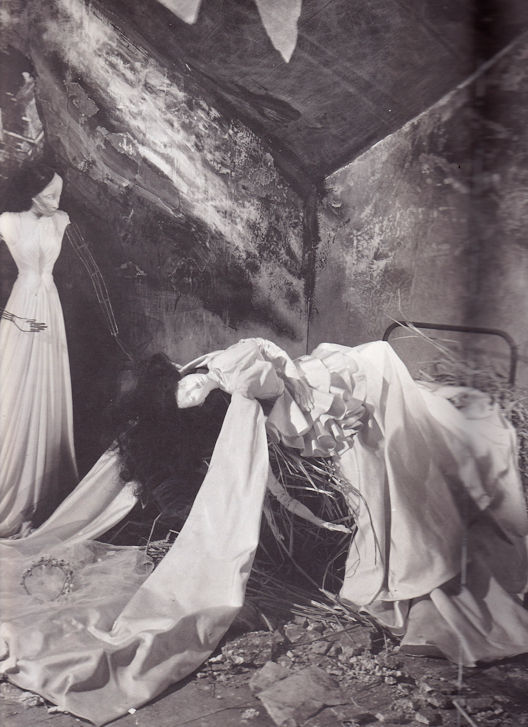 This is a tableau from Theatre de la Mode, a travelling show of haute couture dolls assembled after the war to promote the French fashion industry. One of Rochas’ contributions was this very similar bridal gown with a layered, ruffled peplum, only this bride is dead amongst the rubble of war.

So then, of course, I had to see Falbalas.  It was only available as a pricey, un-subtitled, region 2 DVD.  Never mind, I had my high school French to fall back on!  I loved it for deep dive into post-war French fashion, with the film’s wardrobe being designed by a real couturier, Marcel Rochas.  It had a bit of a Jean Cocteau, Beauty and the Beast-ish vibe, too.  When I met Bruce Goldstein, the head programmer at Film Forum in NYC, and the owner of Rialto Pictures, I asked him about the film, and he said, “oh I have the rights to that film.”  Over the years, I have asked when he was going to release it, and when he said, last fall, that it was going to be at a Jacques Becker retrospective at Film Forum, I immediately asked to book it here at the NCMA.  It has subtitles, now!

Becker was born into a well to do family in Paris.  His father was an industrialist, who hoped his son would choose engineering.  Becker no doubt disappointed his father, as so many artists do, by becoming an assistant director for his friend, Jean Renoir.   During the 1930s, he worked on some of his most acclaimed films, including Boudu sauve des eaux, Partie de campagne and La Grande Illusion, and even played bit parts.  In the latter film, he is the English officer who destroys his watch, rather than have the Germans confiscate it.  Becker fought the Germans during France’s brief skirmish before Occupation, but was captured and became a prisoner of war.  He faked epileptic seizures in order to be released.  He began his film career in earnest during the Nazi occupation of France.  Fabalas was his third feature, his first original script, and his first “masterwork…  “In “Falbalas,” for the first time, he proved himself—while Ingmar Bergman was still serving his apprenticeship—to be a master of the close-up, the burning stare into camera, the nearly unbearable intimacy with characters that the cinema grants directors—and viewers” (New Yorker).  He made some well-regarded films after the war, including Casque d’Or, Touchez pas au grisbi and Le trou, but died young, at the age of 53 in 1960. Francois Truffaut wrote of his colleague, “Becker was a film lover.  You could feel, even after twenty years spent at his trade, how overwhelmed he was to have fulfilled his adolescent dream of making movies” (Truffaut 186). 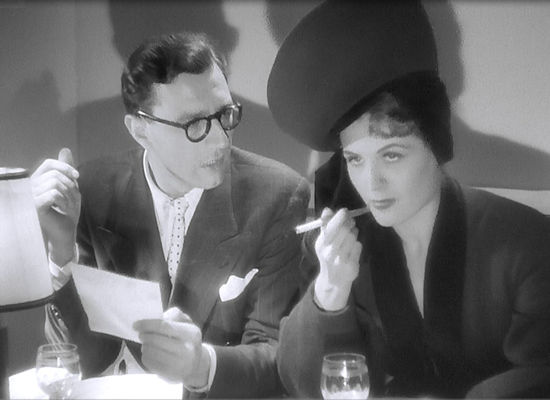 Falbalas has the most amazing hats! Frivolous hats constructed from non-rationed materials were considered to be a defiant gesture in the face of the Nazi occupiers.  The hats in the film were created by Gabrielle.

Becker, who co-wrote the script with Maurice Auberge, knew the world of haute couture well.  His mother was a “premiere” a pattern-maker for Callot-Soeurs, a distinguished couture house, but then opened her own dressmaking salon in Paris. Becker grew up in this environment, at least until his father, supposedly managing the finances of the establishment proved himself more interested in the models.  His mother then devoted her energies to educating her only son.

High fashion houses were allowed to continue to operate During WW II (under the shadow of collaboration) because, although visited by French clients who felt they were saving the honor of France by ordering new gowns, the haute couture was also patronized by the wives of Nazi officers.  The Nazis had wanted to move French couture, the second largest business in France, to Berlin and establish the German city as the center of style.  Lucien Lelong, the head of the French Fashion Syndicate, argued passionately that there were too many artisans in the supporting industries like embroidery, beading, millinery and leatherwork to make such a shift practical. He also kept 25,000 specialized workers, many Jewish, from being deported to Nazi labor camps.  Fabalas was meant to be an escapist glimpse at this fraught situation, as the buzzy glamour of a great couture house was shown to be removed both from the intense labor in the sewing rooms and the fraught situation in France. 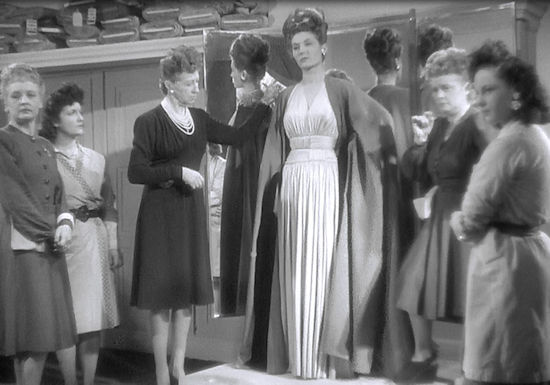 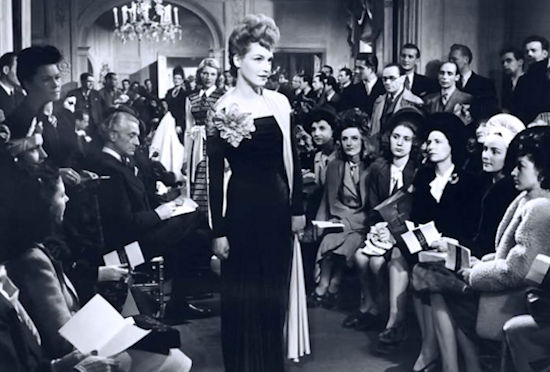 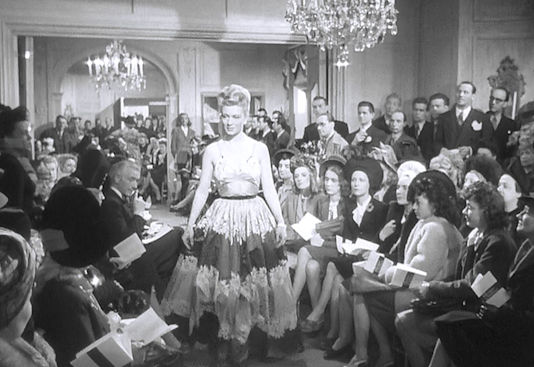 Falbalas began filming March 1, 1944, at a moment when France was still occupied, but the end of the war seemed near.  There is no sign of the Germans, who were still in Paris during filming.  Like American film noir, it reflects how women’s autonomy, while men were at war, either in combat or the Resistance, became a threat to the patriarchy as civilian life was resumed.   Phillipe, the main character in Falbalas, (I hesitate to describe him as a hero) is obsessed with the bodies and beauty of the women who become his muses, but isn’t remotely concerned with their emotional lives, for him, they are as hollow as the mannequin he idolizes.  Micheline, his current inspiration, discovers passions of her own transcending her relationship with her rather dull fiancé, but to Phillipe, she remains merely an elegant, and infinitely replaceable image.

Micheline was written for the actress who plays her, Micheline Presle.  She said of him, “Becker was a man of great elegance, physical and moral. He was handsome in his own way, tall with gray hair, an original spirit, he stammered a little… He was very seductive”  She remembered that most of the film was shot at night, because during the Occupation, there was no electricity in the studio during the day (Naumann 137-8). 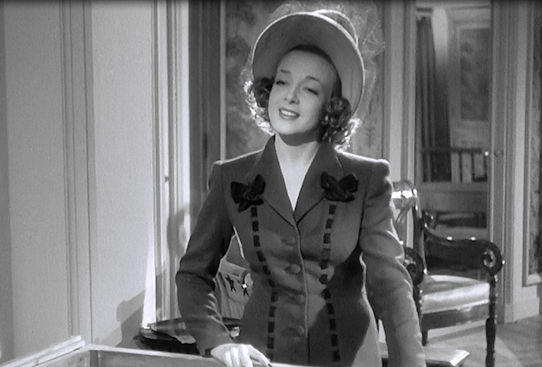 As in The Phantom Thread, which must surely have been influenced by this film, the head of the fashion house, Solange, is the matriarch, and part of her job is facilitating the affairs that her boss requires for inspiration.  She presides over a community of independent working women, yet she occasionally betrays them at his behest.  Phillip’s fantasies are his own:  Micheline, an actual woman, is only an image.  Yet, her affair with the narcissistic Phillipe sparks her liberation.  This was part of Becker’s inspiration for the film.  “The period of the Occupation marked the beginning of a certain degree of emancipation for young women from a wealthy background.  Some of them took lovers before getting married.  Such behaviour was previously found only among young women from a less well-off background” (Burch and Sellier 225). This was part of the crisis of masculinity in these Occupation-era films, “The men are unable to summon up the talent or the emotional depth necessary to match the women they claim to love” (Sieglohr 69).

The film gives a rare view of Paris’ empty grand boulevards during the Occupation, and hints at the privations of war, when both wealthy and poor Parisians alike rode bicycles, because of gasoline shortages.

A news photo of fashionable Parisians on their bicycles.

The fashions in this extremely fashionable film were designed by Marcel Rochas, a Becker family friend.  He was a native Parisian who opened his own couture house in 1924.  He was married and divorced twice before meeting Helene, his third wife.  The family lore had it that he saw her taking the last Metro home late one night in 1941.  He told her she had a head for hats, and she became his model, then muse, then wife.  He was controlling about her image, which caused her great frustration.  After his early death, she continued to run his company, the first headed by a woman in France.  Rochas loved prints, especially flowers and birds, and three dimensional birds were sometimes were incorporated into his designs “why settle with feathers if you can have all the bird?” He made bold color choices, once mixing a lavender grey with yellow in an evening gown.  In the early 1930s, his designs foreshadowed both the wide shoulder-look often attributed to Schiaparelli, and a decade later, the longer skirts of Christian Dior’s New Look, and he designed a grey flannel pantsuit at a time when slacks for women were not often worn in public.  He was fond of the ¾ length coat, and featured pockets in skirts.  Although his house survives, if his name is known at all today, it is because of the perfumes, especially Femme, created in 1943 for Helene. Becker, at ease in the haute couture world, also contributed to the look of the film’s fashion. 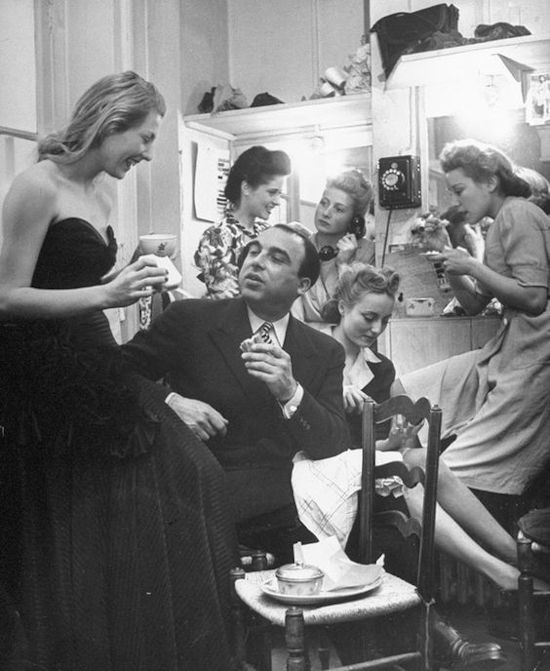 Marcel Rochas in his salon. 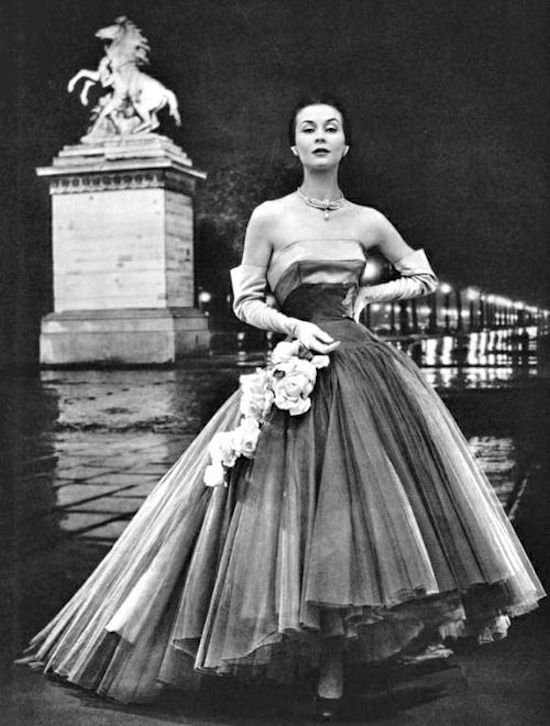 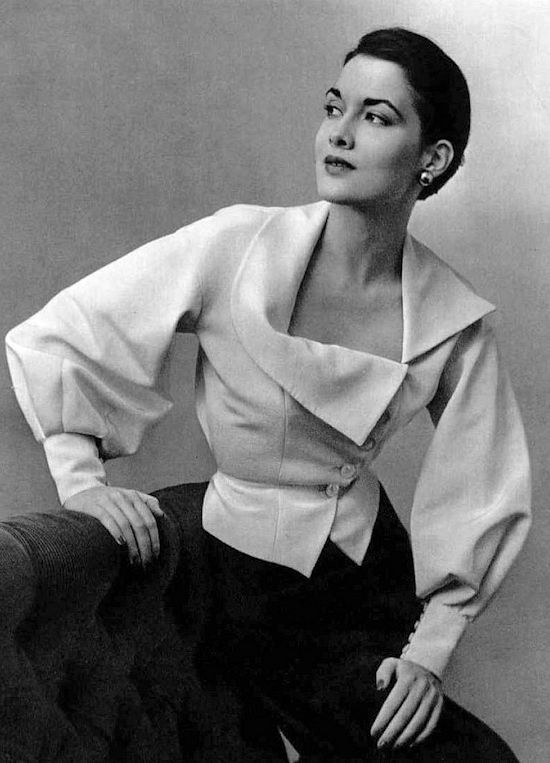 These are two Rochas couture creations not in the film.

Becker said of his career, “I believe in the possibility of entertaining friendship and in the difficulty of maintaining love.  I believe in the value of effort.  And, I believe above all, in Paris.  In my work I do not want to prove anything except that life is stronger than everything else” (Paris 142).

The Great French Films by James Reid Paris, French Cinema: From Its Beginnings to the Present by Remi Fournier Lanzoni, The Films in My Life by Francois Truffaut , The Battle of the Sexes in French Cinema 1930-1956 by Noel Burch and Genevieve Sellier, Heroines without Heroes edited by Ulrike Sieglohr, Film and Community in Britain and France by Margaret Butler, https://wwd.com/eye/people/sophie-rochas-writes-book-on-father-marcel-rochas-10106130/##!3/marcelrochas_p100,  https://thebiography.us/en/rochas-marcel (This link is broken). https://www.newyorker.com/culture/the-front-row/an-essential-retrospective-of-the-french-filmmaker-jacques-becker-at-the-newly-renovated-film-forum , Theatre de la Mode edited by Susan Train, Fashion in the Forties by Julian Robinson, Jacques Becker: Entre Classicisme et modernite par Claude Naumann