Baines, the butler at the French Embassy in London, has a shrewish wife, a furtive lover, and a fierce admirer in the lonely little boy who unknowingly betrays him. Reed is best known for The Third Man, and this Hitchcock-style collaboration with writer Graham Greene is clever and nerve-wracking.

Carol Reed was the illegitimate son of the great British actor-manager, Sir Herbert Beerbohm Tree. In the Victorian era, it was not unusual for prominent or aristocratic gentlemen to maintain discreet, separate households, with a wife and children in one, and mistress and her children in another. Tree was a notorious womanizer in a day that may have granted license to famous men, but still attached a terrible stigma to illegitimacy. Reed was one of six children born to Beatrice May Pinney by Tree, and necessity of being discreet about his private life carried over into a lifetime of reticence about his relationships. She gave her children the surname Reed, “Because I was but a broken Reed at the foot of the mighty Tree.” (Wapshott). Carol Reed resembled Tree physically, and in his career aspirations; he wished to become an actor. Tree died when Reed was 10, and his shadowy father disappeared permanently from his life. Perhaps, this feeling of abandonment was tapped in his direction of the lonely little boy who is the central figure in The Fallen Idol.

Reed had a comfortable upbringing and a public school education. He was sent to the US in 1922 to learn chicken farming, but he “did not warm to the barnyard” and was sent quickly home (Moss). His mother acquiesced to his theatrical ambitions, and he eventually joined a theatrical troupe founded by the mystery writer, Edgar Wallace. Wallace would provide Reed’s entrée to the movies in the early 1930s, when he joined a studio making film versions of Wallace’s novels. In 1937 he briefly visited Hollywood, where he hoped to be invited to stay, but he wasn’t. Right before the war, he directed a couple of popular films in Britain, The Stars Look Down and Night Train. He made documentaries during the war, including The True Glory about the Normandy invasion, which he co-directed with Garson Kanin. His first film after the war was Odd Man Out, starring James Mason as a wounded IRA soldier on the run, which was Reed’s break-out hit.

The Fallen Idol is a relatively optimistic adaptation of a bleak 1935 story by Graham Greene, “The Basement Room.” In Greene’s story, a crime is committed by a sympathetic character. The trauma is relived by a witness, at the time, a little boy and now an elderly man. Greene wrote it on a cargo steamer, to relieve the boredom of a voyage from Liberia to London. He thought his story “unfilmable” with “an unhappy ending which would certainly have imperiled the 250,000 pounds that films nowadays cost”(Evans). But Reed, with a new studio behind him, and the great critical and financial success of Odd Man Out, did not envision a film as depressing as Greene’s story. His version would take the bare bones of that English standard, the drawing room mystery, and turn it on its head. The screenplay was written in 10 days in a suite of rooms at a Brighton hotel, with each writer working in separate rooms and a secretary between them both. The amicable relationship gave Greene quite a lot of control over the content of the finished film. It was Reed’s suggestion to change the private home of the story into an embassy, since after the war nobody could afford a London mansion big enough for a child to lose himself. In spite of Reed’s love of animals, it was Greene who added the pet snake, MacGregor.

The films on which Reed and Green collaborated highlight their mutual “interest in betrayal, the overlaps of guilt and innocence, the glamour of evil and the dullness of virtue, the hypocrisy of governments and just causes…” (Evans). For many years Green was the film critic for the London Spectator, so he did not grouse at writing for the movies. The Fallen Idol was Green’s favorite of his many screenplay adaptations.

Ralph Richardson was considered to be primarily a stage actor, in spite of his making 81 films between 1933 and his death 50 years later in 1983. He did not have the matinée idol looks of his contemporaries like Laurence Olivier and Michael Redgrave, and he made his most well known movies in middle age and later. He considered his role in this film to be his best, although he was Oscar nominated the following year (1949) for his role in The Heiress, playing Olivia de Havilland’s father. He was knighted in 1947.

Michele Morgan’s most famous role was as Jean Gabin’s lover in the moody Quai des Brumes; she was one of France’s most popular actresses. She came to Hollywood, as did many of her compatriots, to escape the Nazi occupation of France, married an American actor and signed an RKO contract. Warner Brothers wanted her for the lead in Casablanca, but RKO wouldn’t lend her out, and the part went to Ingrid Bergman. Morgan did star in a still entertaining Casablanca rehash, Passage to Marseilles. 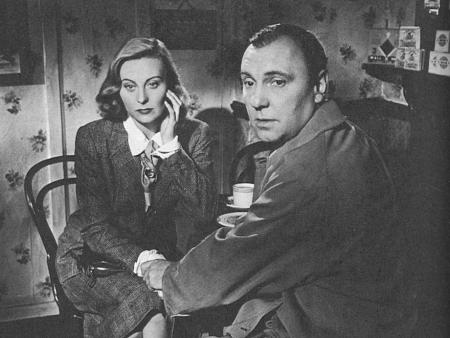 The Fallen Idol benefits from an extraordinary performance by 8 year old Bobby Henrey. Henrey’s father was an author, and Reed has spotted the boy’s photo on the jacket of one of his father’s books. His mother was contacted to request the boy for a screen test. He spoke English with the faintest of French accents, which was perfect for the part, and, as an only child living with parents who were both writers, was at ease with adults.

Reed was, by all accounts, somewhat like an overgrown boy himself, and he had great sympathy with his young performer. He observed the Henrey, and changed his direction to incorporate his natural postures and expressions. Richardson, at 6 ft 3 inches was quite a bit taller than Henrey, and as they walked along together, only his trousers could be seen when the camera was focused on the child. Reed put on the costume himself and walked along side Henrey, coaching him on camera. The dialogue was kept short, although it is not true, as is so often asserted, that Henrey’s longest line was only 14 words long.

One reason professional actors hate acting with children is that they may remember their dialogue, but often forget their cues. Reed would shoot the scene up until Henrey’s line, then cut, do a separate take of the line reading and start again. Sometimes, Reed would speak Henrey’s line himself, and the boy would dub the dialogue later. This relaxed the actors worried about working with a non-professional. He was also able to share his love of animals with Henrey’s whose rather pathetic affection for his snake, MacGregor, propels the action. Reed collected animals, his wife had an agreement with the local pet shop that if any of his acquisitions was unsuitable, she had 24 hours to return it.

The film also benefits from most unusual camera angles and a sly humor amidst the seriousness, a quality that has almost completely deserted modern filmmaking. The skewed camera angles, the ominous game of hide and seek, and the floor of the embassy like a giant chess board over which the characters glide to their fates, contribute to the film’s mood of hidden pursuits and double lives. The Fallen Idol was the Best British Film of 1948, and Reed won the New York Film Critic’s Best Director Award.

Reed directed his most famous film, The Third Man, directly after The Fallen Idol. Writers have speculated that Orson Welles, employed as an actor for the film, also contributed to the direction, as well. But, The Fallen Idol is strongly related stylisticly to The Third Man, and little Phil’s pyjama-clad run though the deeply shadowed streets of London can help but evoke the later landscape of The Third Man’s Vienna. I saw a revival showing of Odd Man Out in LA a few years ago, introduced by David Thomson, the author of A Biographical Dictionary of Film. He made a remark that really struck me, when explaining how Reed could have made a few splendid films amongst a career that many would consider rather modest. He said, “A great director is not great all the time.” I think it’s clear that Reed’s greatness is on display here. 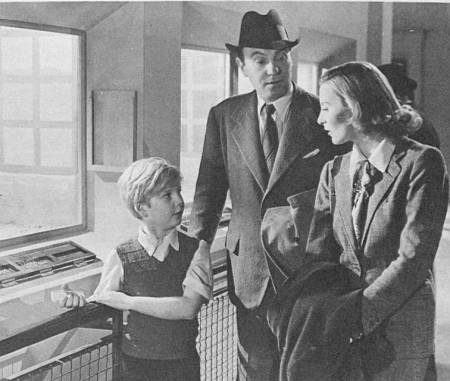