Edward G. Robinson’s hard-boiled tabloid editor has a crisis of conscience when his publisher demands he resurrect a 20-year old sex and murder scandal as a circulation stunt. His self-loathing battles his cynicism after he sends a failed divinity student (played by Boris Karloff one of his last roles before Frankenstein) to callously wreck the lives of a happy family.

The 1920s was flooded with sordid tabloid exposes, only in print, instead of on reality tv or the internet.  There were the famous Hollywood scandals:  comic Fatty Arbuckle was implicated in a starlet’s death, director William Desmond Taylor’s unsolved murder embroiled two popular actresses, clean-cut Wallace Reid, beautiful Barbara LaMarr and other movie stars died of drug addiction. Mae West was tried for obscenity for writing and performing in her play,Sex, although she was not indicted until after the premiere of The Drag; the third act employed real drag queens in a staged wild party. “Peaches” Browning a gold digger whose extremely public marriage and divorce from an older man who exploited underage girls, fought for space with the murder charges against Ruth Snyder and her lover Judd Gray, accused of killing her husband. A news photographer in the death house, with a camera secretly strapped to his ankle, immortalized the moment of her execution. 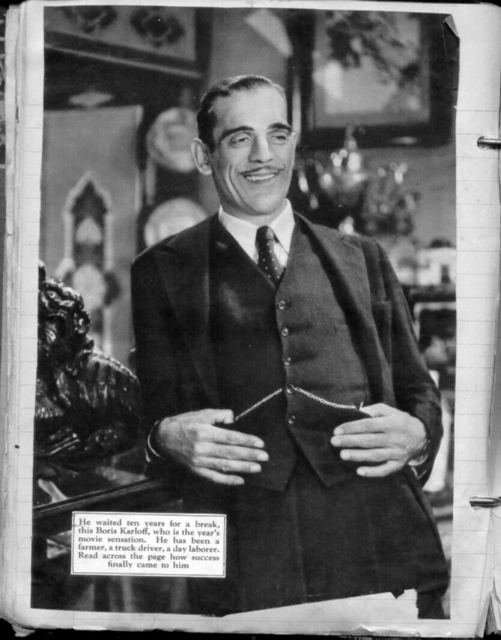 “He waited ten years for a break, this Boris Karloff, who is the year’s movie sensation. He has been a farmer, a truck driver, a day laborer. Read across the page how success finally came to him.”

Publisher and media mogul William Randolph Hearst hated the early 1930s cycle of anti-yellow journalism films, considering them a personal attack. Five Star Final seemed more personal than most, since both the play and film referenced Hearst’s New York Mirror‘s 1926 reopening of a notorious unsolved murder case from 1922. The tabloid had claimed new evidence, there was an arrest and a trial,  which resulted only in anguish and humiliation, thanks to the Hearst paper’s “careless disregard for fact and an insatiable thirst for blood.” (Pizzitola). Five Star Final‘s unscrupulous publisher, Hinchecliffe, seemed to Hearst a caricature of himself.  His attempt to have the film banned ended in failure.

Five-Star Final was based on a play by Louis Weitzenkorn, a former editor of the NY Evening Graphic, nicknamed the “porno” Graphic, for the tone of its stories; “produced by swindlers for suckers.”  The play lasted 175 performances on Broadway, and is perfect for Warner Brothers ripped from the headlines aesthetics.  As William M. Drew points out in At the Center of the Frame, a wonderful book of interviews with actresses active in the late silent and early sound eras, adapting hit plays was in itself not unusual, but the staging was unusual, since there were 20 scenes played out on a trisected stage. The startling split screen technique used in one sequence, where a mother pleads on the telephone with the managing editor on one side and the publisher on the other, was played up in the studio publicity. But, the composition derived from the original staging, and was merely adapted by director Mervyn LeRoy. 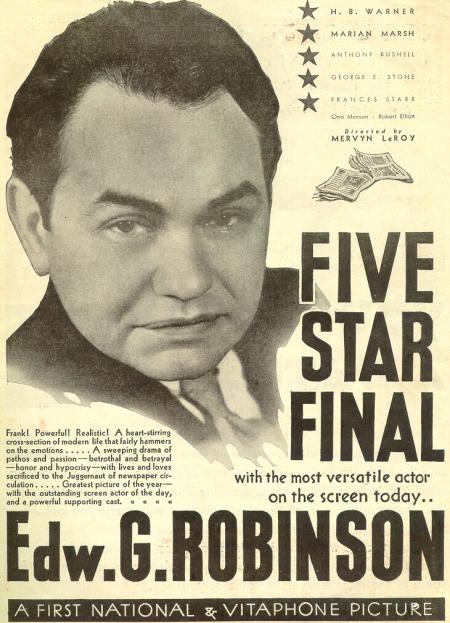 Ad inside front cover of The New Movie Magazine, October, 1931

Edward G. Robinson exploded onto the screen as the gangster Little Caesar in 1931. Although the film may seem slow paced to modern eyes, Robinson’s performance, as a criminal slaughtering his way up the ladder of success, is still scintillating.  He was born Emmanuel Goldenberg in Bucharest, Romania, in 1893 and arrived in the US when he was nine. His love of acting revealed itself early when young Manny gave what was considered to be the longest Bar Mitzvah speech in the history of his Lower East Side synagogue. He was drawn to acting soon after, and studied at the American Academy of Dramatic Arts in NYC. He was encouraged to change his name and chose Edward G. Robinson, keeping his initials and adding the de rigueur Anglo-Saxon surname. He honed his craft in stock, but in looking for jobs in New York in the ‘teens remarked, “In those days I would go for an interview and find myself competing with this other chap who would always be younger and taller, and much handsomer than I. I would recognize immediately that the producer wasn’t particularly sympathetic and I learned to say, out of intuition, ‘I know I’m not much on face value, but when it comes to stage value, I’ll deliver for you’” (Parish 17).

Robinson worked steadily on Broadway throughout the 1920s, and made his first talkie (he’d been in one silent film) at Paramount’s Astoria studio in New York. Irving Thalberg of MGM brought him to Hollywood in 1930 and he stayed, eventually signing a contract with Warner Brothers, offering him the role of Caesar Enrico Bandello, Little Caesar.  Most leading men don’t look like Robinson. He always maintained that his looks, rather than being a handicap, kept him from being cast in the bland romantic parts that were often the lot of the usual leading man. The reverse was also true, in that handsome actors were kept from playing parts that were perfect for him. He said in his autobiography of his character, “I loved Randall because he wasn’t a gangster.  I suspect he was conceived as an Anglo-Saxon.  To look at me nobody would believe it, but I enjoyed doing him.  He made sense, and thus I’m able to say that Five Star Final is one of my favorite films” (Robinson 142).

Randall, the hard-boiled self-loathing tabloid editor is a subtle character compared to his star-making turn earlier that year. The same director, Mervyn Le Roy, did both, although in six months his style transformed from the static Little Caesar to the rat-a-tat pace of Five Star Final. Perhaps, he learned from a play, that was trying to compose scenes like a movie, how to keep a movie from looking like a play.

One image that disappeared from movie screens after the end of the Pre-Code era in 1934 was the recognizably Jewish character, of whom there are two in this film, and the casual use of Yiddish. It’s no secret that anti-Semitism was prevalent in the US before WWII. All but one major movie studio was run by Jewish moguls, and the largely Catholic Legion of Decency felt Hollywood (by implication Jewish) morals were tainting the country, and sought to impose their standards on what was largely a Protestant nation.

When the talkies came in, much Broadway talent migrated West. Show business has always attracted marginalized minorities; at that time, primarily Jewish and Irish, and they brought their melting pot mentality to the movies. James Cagney, who was Irish, grew up in the New York city neighborhood of Yorkville, and spoke Yiddish fluently. The story goes that the Warner Brothers were dismayed to discover this, when they thought they were having a private Yiddish conversation in front of him about his new contract, and he let them know, in Yiddish, that he understood. In the early days, Cagney ad libbed Yiddish phrases into some of his films.

George E. Stone, born Gerschon Lichtenstein in Lodz, Poland, plays one of these Jewish characters, Ziggy Feinstein.  Family lore says he is a distant cousin, so I like to think of him as my personal link to classic Hollywood.  He was in Little Caesar with Robinson, and played Toothpick Charlie in Some Like It Hot. His acting career stretched from 1927 to 1963. 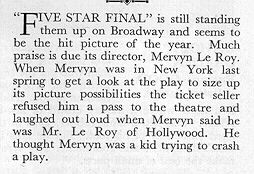 A few other cast notes…H. B. Warner, who plays Michael Townsend, played Christ in the silent King of Kings a fact that audiences would have brought to the film. Boris Karloff was in 18 films in 1931, seven between Five Star Final and Frankenstein. Randall’s lovelorn secretary is played by Aline MacMahon, whose tart intelligence enlivened many Warners films, this was her first film; we saw her star last week in Heat Lightning. 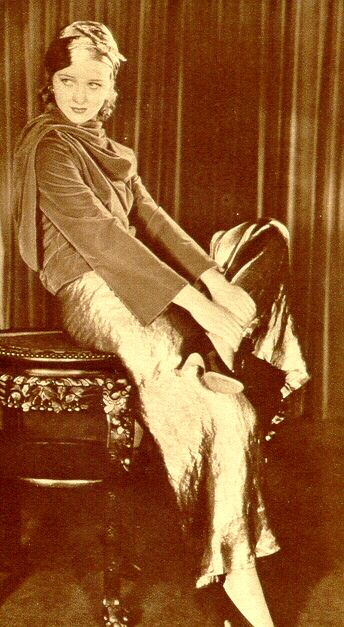 Eighteen year old Marian Marsh was just beginning her film career, but it would end almost as soon as it began.  All her major film roles were before she had a tiff with Warner Brothers and rebelled against the studio in 1932, after which they cancelled her contract, a has-been at 19. She was advised by both Robinson and MacMahon to save her energy for her tour-de-force scene at the end, and not dissipate her emotional strength in rehearsal. There has always been a seemingly unlimited supply of bland starlets to play movie ingénues. Marsh is not one of them. Her accusation scene is chilling, and she more than holds her own against more experienced players.  Although she continued to act from time to time, she never regained the footing that she had at WB in her teens.

Warner Bros Studios was a factory, churning out 52 pictures a year. Players worked day and night, 6-7 days a week. Printing more than one take had to be okayed by the head of production. This film was shot in a quick four weeks. But, in most cases, Warners rough edges have aged better than MGMs glamour. Studio policy stated: “A scenario must have the punch and smash that would entitle it to be a headline on the front page of any successful metropolitan daily. “

This may have been one of the first Pre-Code films that I ever saw. I think it was shown on WUAB the UHF tv channel that showed old Warner Brothers films; I wrote introductions for the movie host, Bob McLean, around 1970. There’s no sex, no violence, no unpunished crime, no ladies in lingerie, so maybe it was sold to tv, where I could see it. My first version of this essay was in 2001, for my second series at the North Carolina Museun of Art.

The conflict between morality and money was a common one in the social consciousness films that Warners made in the 1930s with the same verve as their gangster pictures. The film’s publicity highlighted that “a noted California justice” claimed “the strongest editorials in the country are not in the newspapers but in the talking pictures.” Significantly, this film makes tabloid readers complicit in the sleazy editorial policy of the fictional “Gazette;” the same readers who made up the movie’s audience. The plot hinges on a concept as quaint as the candlestick phones everyone is barking into, that a person can, and perhaps should, feel shame. 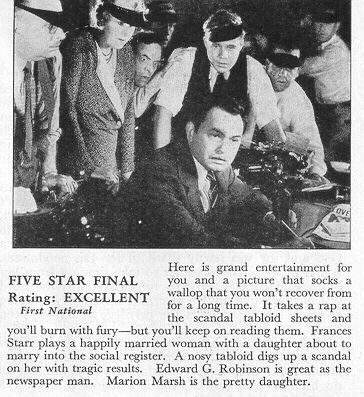