Shakespeare and Freud collide under the green skies of Altair IV. Leslie Nielsen (in his MGM starlet days) plays a proto-Captain Kirk whose space ship scouts for a long-lost Earth colony and unleashes forces best left alone. Suavely mysterious Dr. Morbius and his chaste daughter Altaira appear to be the only survivorsbut are they? Robby the Robot plays Ariel in this lavish outer space version of The Tempest.

MGM spared no expense in this elegant and unusual science fiction film, quite a departure from the studio’s usual fare. Robby the Robot is hardly the first mechanical wo/man in the movies, but he is surely the inspiration for C3PO (Star Wars) and HAL (2001). Robert Kinoshita designed “one of the most elaborate robots ever built for a film production. More than two months of trial and error labour were needed to install the 2600 feet of electrical wiring that operated all his flashing lights, spinning antennae and the complicated gadgets that can be seen moving inside his transparent, dome shaped head.” (John Brosnan, The Primal Screen). Vivan Sobchak described him in Screening Space as a “mad mating between the Michelin tire man and a juke box.” He cost $125,000; a lot of money for a single prop, and was inhabited by a couple of different actors. His voice was courtesy of Marvin Miller, whose other brief moment of fame was in The Millionaire, a 50s tv show, where every week he was tasked by a rich benefactor with delivering a million dollar check to a surprised guest star. Robby obeys Isaac Asimov’s Laws of Robotics. (A robot may not injure a human being, or through inaction allow harm to one, A robot must obey human orders, unless in conflicts with Rule 1, A robot must protect its own existence, as long as Rule 1 or 2 are not violated.) He is a fully drawn character, and his smug superiority provides much of the film’s humor.

Robby turned out to be a pioneernot just of galaxy exploration but of movie merchandising tie-ins. The toy version was hugely popular and still is. You can still get the Robby the Robot of your dreams from a site that includes a generous helping of Robby the Robot history and trivia and a movie robot timeline, as well as shopping (address below). Forbidden Planet‘s monster was created by Joshua Meador, the head of the Disney animation effects studio. Although tame by current standards, it was considered excessively frightening at the time, and was edited out by some state censor boards.

Forbidden Planet is somewhat confined by an elaborate sound stage landscape (although I’ll take it over those foam rubber Star Trek “on location” boulders any day). Dr. Morbius has a California modern house that would look natural in Big Sur. Anne Francis wears a goofy series of “futuristic” dresses supposedly tailored by the resourceful Robby, but actually designed by Helen Rose. Rose decided that “with excercise, dieting, health and beauty consciousness, the human body, especially the female body was getting more and more beautiful…I had been nurturing a costume idea for over twenty years, ever since I did the special show for (ballroom dancers) Fanchon and Marco when I painted the performers with gold paint. I thought this would be a good idea for the film Forbidden Planet, as I could easily imagine ‘sprayed -on-clothes’ in the year 2000, but no one wanted to go along with me. We settled for a very short, styish dress that was to become the first ‘mini-skirt.’ My most favorite outfit was never seen.” 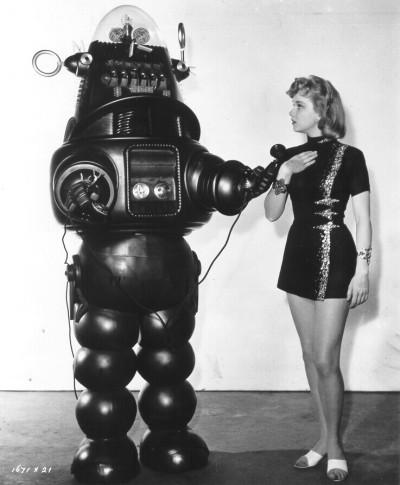 “For Me?” The limits of imagination: space travel and dial telephones.

Anne Francis describes it: “The most exotic outfit Helen designed for me was for Forbidden Planet, and it was never seen in the film. Mr. Dore Schary (head of MGM) nixed it as being too revealing! It was an all-in-one form fitting jump suit of silver lame. It was long sleeved and covered me from neck to toe, with silver cuffed gloves to match. It also had a skull fitting lame hood, similar to the hoods worn by the Knights of Old. Over this was to be worn a see-through coat that was knee length and belted in at the waist. Specially made see-through shoes were to adorn my silver feet. It was sexy for sure…”A fond wish for the future has always been that women would all choose to wear skimpy clothes.

Walter Pigeon’s career lasted over 50 years, from the late silent era to the 1970s. He was most closely identified with his 1940s work, particularly John Ford’s How Green Was My Valley and partnered with Greer Garson in 8 films, including Mrs. Miniver. His dignity gives Forbidden Planet a beneficial gravitas. Anne Francis is stuck playing a dumbell, but for ingenues, it is ever so. Leslie Nielsen’s straight-laced commander gives no hint of the humor he brings to his late career spoofing parts. Comic relief of the strictly heavy handed kind is courtesy of Earl Hollimandid anyone ever think his antics were funny? Crew member Warren Stevens is a 60s tv villain stalwart, always a welcome sight.

The musical score, termed “electronic tonalities,” was composed by Louis and Bebe Barron. They were a married couple, collaborators of avant-garde composer John Cage. The “bleats, burps, whirs, whines, throbs, hums and screeches” that make up the sound track contained carefully developed themes and motifs, as well as providing general atmosphere. Unlike Bernard Herrmann’s score for The Day the Earth Stood Still, which used the Theremin as well as an unconventional selection of standard musical instruments, Forbidden Planet’s innovative score was entirely electronic. 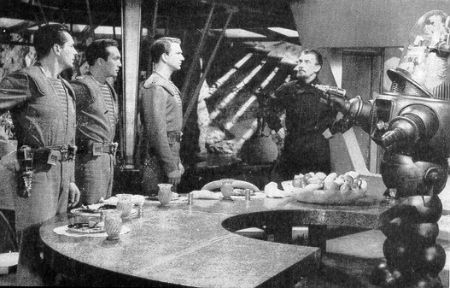 The Tempest was special effects wizard Irving Block’s favorite play, and he helped write the story with Allen Adler. It incorporates mythological themes, such as the loss of the heroine’s innocence resulting in the destruction of her supernatural powers. But, since it was aimed, at least in part, at children, the linked theme of Dr. Morbius’ incestuous desire for his daughter was somewhat sublimated.

John Brosnan is convinced Shakespeare would have approved of this treatment, “if he received screen credit and a percentage of the gross.” He added, “This was indeed the real thing for the first time in the cinema: a science fiction movie set in the future just as it should be, calmly presenting the fact that the human race would survive long enough not only to develop a highly advanced technology, but expand into the stars. Science fiction fans wept openly in the cinemas.”

(Robby and Anne photo from Jerry Ohlinger’s Movie Material Store. Other photo (and music quote) from April 1956 Films in Review. They liked it (for a change). Helen Rose and Anne Francis quotes from Rose’s autobiography, Just Make Them Beautiful. Get your very own 7 foot tall Robby the Robot at www.the-robotman.com.