A struggling impresario In 1880s Paris features a notorious dance at his new café, the Moulin Rouge.  A paean to creative collaboration (even between feuding dancers) it is a cinema artist’s tribute to the art of his father, painter Auguste Renoir. “Ultimately, French Cancan has turned out to be the happiest and most exuberant ripple in Renoir’s career as a river of personal expression” (Andrew Sarris). 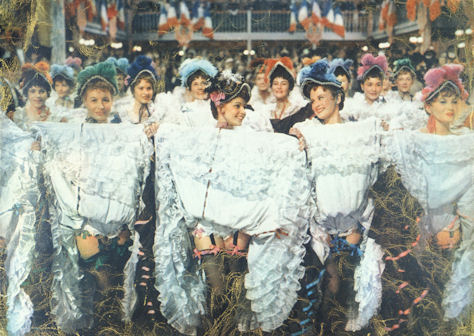 Jean Renoir was the middle of three sons born to Impressionist artist Auguste Renoir, and as a boy was the subject of many of his father’s paintings. He grew up in a lively and unconventional atmosphere amongst family and friends who valued beauty and creativity. Renoir discovered a passion for the movies during his long recovery from several WWI injuries. He inherited money from his father and set up his own film production company. In the 1930s he made a number of superb movies, at least two of which, La Regle du Jeu (The Rules of the Game) and La Grande Illusion recur time and again on lists of the greatest films of all time. He left France during the the Occupation and made films in Hollywood, (and also in India and Italy) although he was unappreciated in California.  “Renoir has a lot of talent, but he is not one of us” said Darryl F. Zanuck, his studio boss.  The director’s reply was that “it has been a pleasure working at 16th Century Fox” (Thompson).

The film was a homecoming for the director, his first film made in France after a long period of exile, since The Rules of the Game in 1939. Dave Kehr writes, “Indeed, Renoir seems determined to gorge himself on images of ‘Frenchness’…one French critic complained that the spectator cannot believe for one second that he has been taken into an actual Paris street’” (Kehr 269). 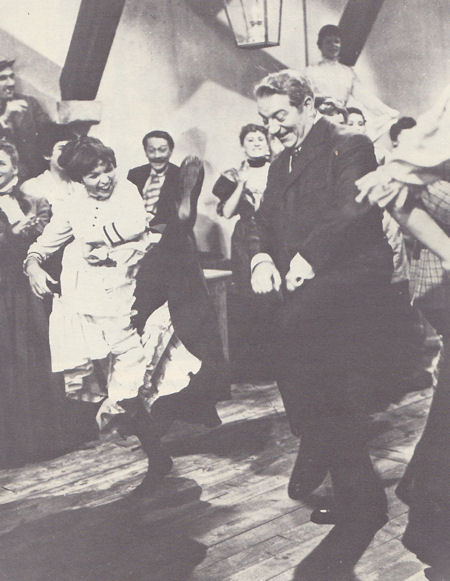 French Cancan is a celebration of the Paris of Auguste Renoir, set in 1888.  Danglard, an impresario (based on the creator of the Moulin Rouge, Charles Zidler) has fallen on hard times, and decides to revive an antiquated folk dance, the chahut, and make it the rage of Paris.  A more recent version, the polka-piquée,  had become popular in the mid-19th century. Dancers kicked their legs as high as they could, showing not frilly lace (too expensive) but their finest cotton drawers. Danglard renames it the French Cancan (because everything English is in vogue, he uses the English word, French).  The only way he can do it properly is in a new nightspot, the Moulin Rouge.  Built in declassé Montmartre, it will give the aristos a frisson of slumming, as well as enticing the locals to enjoy the spectacle along with their betters.  That way he will be removing money from everyone’s pockets.

The real Moulin Rouge was opened on the site of an older cabaret, La Reine Blanche in 1889, but there were at least 4 clubs on the site of old windmills in hilly Monmartre.  Nearby, Nini Patte En l’Air (paw in the air) was the doyenne of a dancing school, where wealthy men could attend rehearsals and “encourage girls with valuable suggestions” perhaps, like the dancing studio portrayed here (Durgnat 302).

Although there had been a story with another director attached at the beginning, the producers allowed him to make any story he wished as long as he retained the title of French Cancan.  He was relieved to work in his native language with artists he was used to and admired. He returned to a favorite theme, the love triangle.  Danglard has three lovers, as does sweet natured but ambitious Nini and the tempetuous star, La Belle Abbesse (played by Mexican diva, Maria Félix).  Yet, they are all really in love with the theater.  The legendary Edith Piaf briefly appears as a cabaret singer, and other popular French singers (less well known today) make appearances. 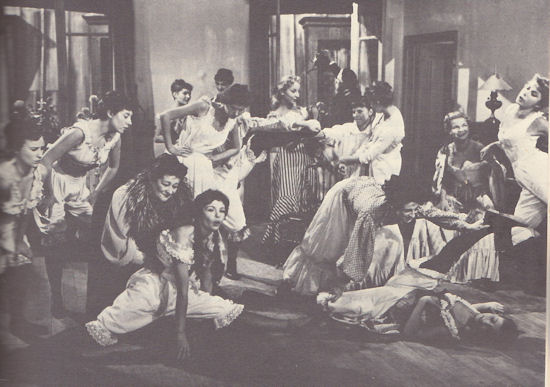 Rehearsing for the French Cancan.

Renoir wrote the screenplay, after an idea of André-Paul Antoine, but the film has an improvisatory feel. “Renoir once remarked that he had spoken the screenplay as much as written it” (Sarris).  The producers dreamed of Charles Boyer as their Danglard, but he was unavailable, and Jean Gabin replaced him.  Renoir embraced the chance to work again with that icon of French cinema, with whom he had worked in Grand Illusion, The Lower Depths and La Bête Humaine, although Gabin was cross with him for having taken American citizenship during the war.  But, they quickly reestablished their old relationship.  Renoir wanted Leslie Caron to play Nini, but that, too, did not work out, and she was replaced by Francoise Arnoul, popular on French screens as an early “sex kitten.” 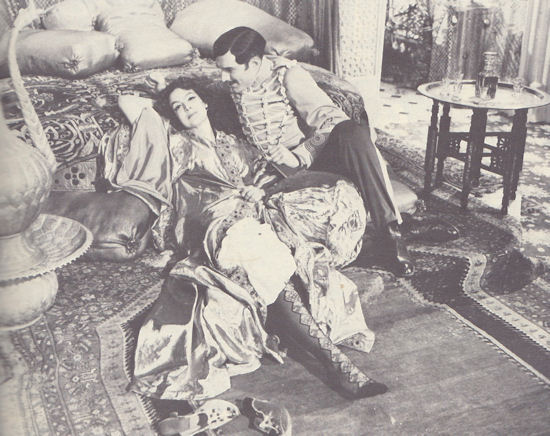 La Belle Abbesse and one of her lovers. The film is so open about sexual relationships that it must not have played widely in US theaters, still under the domination of the Production Code.

Renoir had dreamed for many years of making a film that was the equivalent of a cinematic opera.  The film was shot between October and December of 1954, and premiered in May, 1955.  When first shown in the US, it was without several scenes from the French version, including a scene of Van Gogh, Pissarro and Degas in a café, and a song deemed too difficult to subtitle.  Still, the 35mm print in circulation is rather lightly subtitled, as were many of the original foreign language “art films” of the 1950s and 60s. Many of the visuals intentionally evoke the Impressionist school.  Street scenes seem to be inspired by Utrillo, and the dancers by Degas canvasses.  La Reine Blanche seems to have been painted by Pissarro, and a woman leans against a post in the style of Manet.  La Belle Abbesse’s boudoir is reminiscent of Delacroix’s Orientalism. 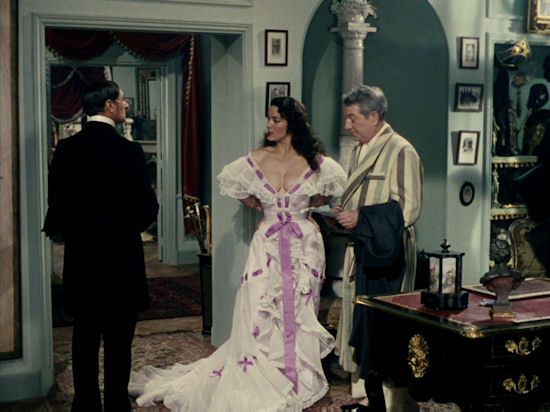 Félix in an outrageously décolleté peignoir, with Gabin.

The sets by Max Douy are no more the real Paris than in  Gene Kelly’s film, An American in Paris.  But, the sets create just the right atmosphere and some of them make you momentarily forget that it IS a set. Didn’t we see that staircase in Monmartre when we were in Paris?  All colors are carefully orchestrated to indicate character “Jean Renoir swallow dives from the historical springboard of the Moulin Rouge’s opening in 1889 into a fairytale Paris…the dive throws off a fountain of painterly damson-coloured corsets, herbaceous hats, milkhue skies, cloaks of goldest lame and vermillion passion couches…the lacy skirts of the dancers surge towards us as prettily as the surf on a windy Edwardian day at Deauville” (Durgnat 312). 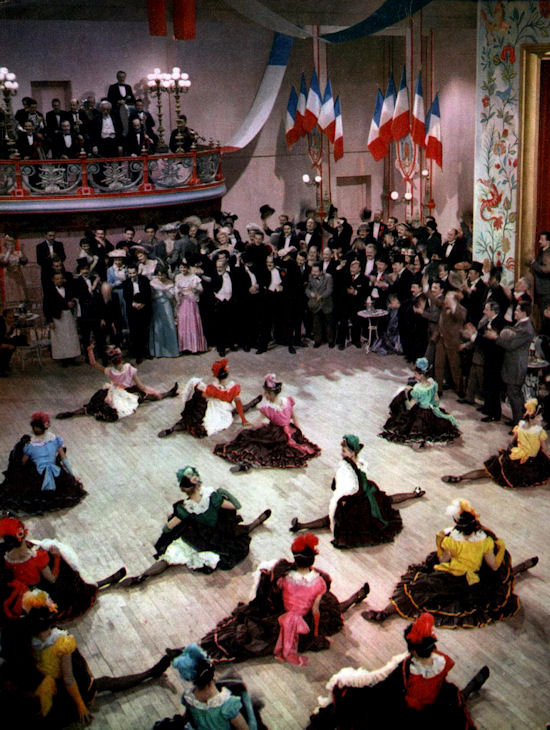 I’m afraid I can’t tell you much about the costume designer, Rosine Delamare.  Her career dated from 1939, and she designed a hundred or so films, mostly French.  She was Oscar nominated for The Earrings of Madame de.  She also did the costumes for Rififi, and the American thrillers, Night of the Generals and The Day of the Jackal.  Everyone “knows” what a cancan dancer’s costume should look like, so it’s an interesting challenge to make something fresh and delightful. But, many of the costumes pay homage to the 19th century, but gowns, like Felix’s below, are pure 1950s, in spite of her earlier appearance in a period appropriate corset. Interestingly, the costumes were constructed by Coquatrix and Karinska. Barbara Karinska began with Serge Diaghilev’s Ballets Russes, and went on to design for the New York City Ballet, where she was head of the costume shop.  Her first film work was for Judy Garland, in The Pirate.  Moviediva, jr. working in the Julliard costume shop, just redid some of Mme. Karinska’s aging tutus for the NYC Ballet, thrillingly linking my daughter to the age of Nijinsky. 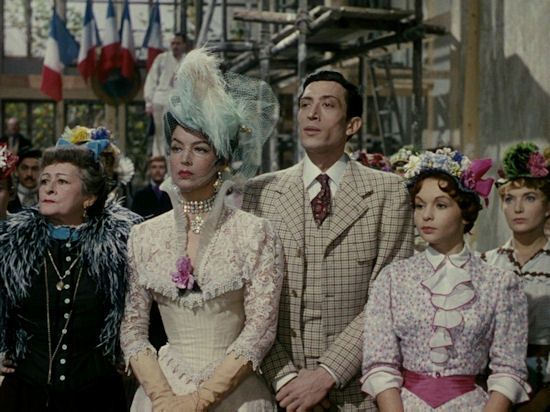 Renoir has a different take on this time period than John Huston’s  Hollywood film, Moulin Rouge, in which “moralizing about artistic promiscuity leading to tragic loneliness and his subplot about a loose living dancer who ends up in the gutter are put firmly in their place” (Durgnat 313).  Instead, “Renoir makes sense of the cancan and its social significance.  The dancers unleash the insolence not only of proletarian energy, but of the aggressive female, and storm the 19th century bourgeois male patriarchy like the light brigade of sexual suffragettes which they are. ..a river of feminine energy flows devastatingly, but not destructively, through society” (Durgnat 314). Needless to say it’s also quite different from Baz Lurhmann’s Moulin Rouge, with its swooping camera and CGI effects and cleverly repurposed pop score. The most notable difference is that Danglard’s affairs are casual, the theater is much more important than any one relationship, and in Lurhmann’s passionate vision, love is more important that life itself.

“The dash and swirl of color of the French Cancan will break down all the barriers, both social and artistic: the world will become a show (Kehr 270). Although the whirl of interlocking love affairs seem likely to derail his magnificent opening, at the last possible moment, out of the chaos, blooms theatrical bliss “what had threatened to be just a glossy polished entertainment is suddenly magically transformed into a profoundly touching tribute to all artists, and all dreamers” (Wilhelm 144).

A backstage musical set in the most delicious of art historical settings, the chaos of the theater comes together, seemingly at the last moment, for an exhilarating storm of liberating dance. The backstage musical is an old formula, in which the drama of putting on a show reflects the courtship of a couple (or more than one couple).   The story of a theatrical performance, always on the verge of spiraling into disaster, with complicated personal relationships and endless technical problems remains a fascinating topic, French Can Can, given could almost be called a Belle Epoque Birdman.

Danglard describes show business as Le plus beau métier du monde, “the most wonderful profession in the world.” Renoir’s film embraces all artistic creativity, “I believe in having your trade. It seems to me that that’s what we should base our lives on, and I think that French Cancan is above all else a homage to a trade.” The film encompasses love and loss, exuberance energy, dazzling color and above all, passion for the theater. 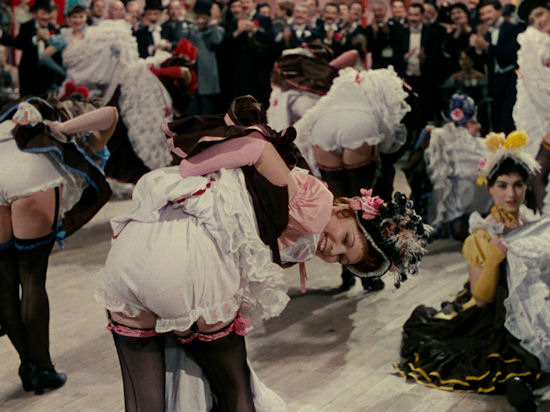 Arnoul in the sexiest giant underpants, ever.