I watched many, many films in preparation for the North Carolina Museum of Art Car Crazy series.  There are so many similarly themed films that I felt I could only choose one in certain categories, one racetrack film, one 70s, “the journey is more important than the destination film.”  I didn’t want the series to be about car crashes, or death by automobile, and seeing crime chase scenes week after week would get monotonous, at least for me.  I hope you enjoy the films I chose, and that you will go to your local library or streamer to expand the series offerings.

We begin with one of the iconic car chases in any Hollywood film, William Friedkin’s The French Connection.  Friedkin’s background was lower middle class, in Chicago.  He ran with a rough crowd, and credited his mother, an operating room nurse, for saving him from being a career criminal after an arrest for armed robbery. He never went to college but shot his first live television show when he was 22, eventually doing over 2000.  He worked for tv’s The Alfred Hitchcock Hour.  He loved Hitchcock’s films, he said, “I went to school on Psycho, I’ve seen it thirty times.”  On his first day on the series, he had to film Hitchcock’s introduction.  He was terrified to meet one of his idols.  But all Hitchcock ever said to him was “Mr. Friedkin, you’re not wearing a tie.  Usually, our directors wear ties” (Stevens 188).

His first film was a documentary about a death row inmate, The People vs. Paul Crump, which, according to Friedkin, himself, resulted in Crump’s sentence being commuted to life. Good Times, his first fiction feature, was a rip off of A Hard Day’s Night starring Sonny and Cher.  Then, he made The Birthday Party, from a play by Harold Pinter, and The Boys in the Band, one of the first gay themed films.  He worried they were seen as too “arty,” and that he would be unemployable.

Phillip D’Antoni, the producer of Bullitt, approached Friedkin, after seeing his documentary on Paul Crump. D’Antoni said, “There’s a book here, about these two crazy guys called Eddie “Popeye” Egan and Sonny “Cloudy” Grosso.  They’re after a guy called Frog One, and they chase him around New York.  He’s got $32 million worth of heroin that he smuggled into the country in the panel of a 1965 Buick.”  D’Antoni gave him Robin Moore’s book to read, but Friedkin never did.  Popeye, Cloudy and Frog One.  That was good enough.  They began writing the script together, and then collaborated with a former crime reporter for the New York Times (Ernest Tidyman, who had just written a novel called Shaft), but they couldn’t get any studio interested.  Finally, Richard Zanuck at Fox called to say he was about to get fired but had a million and a half dollars (or maybe it was $2 million) he wanted to give them to make the film if they could do it for that amount of money.  But it had to be different than a cop show on tv.  “He thought to himself, I gotta put a cop up there like they’ve never seen before, a cop who’s good and evil, as much victim as victimizer.  You don’t see that on (tv’s) Naked City.“ 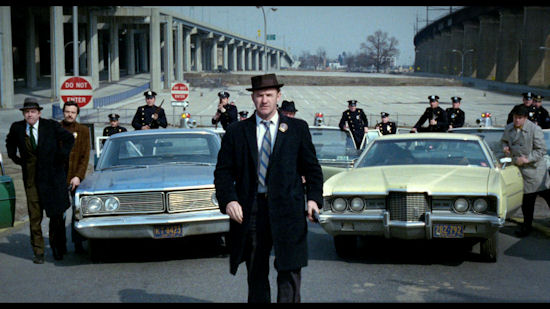 “The film was based on a true story, but of course it was greatly simplified.  In reality, it took place over a year and a half, and dozens of law enforcement people were involved.  ‘Based on a true story’ is just jive.  Everything is based on a true story.  The Creature from the Black Lagoon is as much of a true story as The French Connection” (Stevens 202).  Friedkin rode around with the real-life policemen 3-4 nights a week for a year to steep himself in their world.  Gene Hackman and Roy Schieder spent a month with Egan and Grosso, internalizing their speech and their attitudes. Friedkin wanted the film to SEEM as real as possible.

Friedkin brought his opinionated filmmaking to The French Connection, “I realized I could create my own fictional reality using documentary techniques” (Stevens 187).  The bar bust early in the film was a scene that Friedkin watched the real-life cops do over and over.  In the film, a lot of the extras are bar regulars.  Friedkin used two cameras and just let Hackman and Schieder improvise, choosing the best bits from a single take, as Hackman appropriated the real Popeye, Eddie Egan’s shtick.

Friedkin didn’t want Gene Hackman to play the part, preferring instead a non-actor, newspaperman Jimmy Breslin, who was a great personality, but incompetent as an actor. Jackie Gleason was considered, as were James Caan and Peter Boyle.  Eddie Egan, clearly delusional, thought Paul Newman should be playing him on screen. These days, movies do not have such unpleasant characters as heroes. Antiheroes can be found mostly on tv, on Mad Men, Breaking Bad, Boardwalk Empire. In fact, Gene Hackman, a nice Midwestern fellow, balked at playing Popeye Doyle as he was. Friedkin and Hackman fought over the characterization, Hackman wanted the rough edges softened.  But, watching him on set, the real Popeye, Eddie Egan admitted, “He’s more me than me” (Stevens 204). 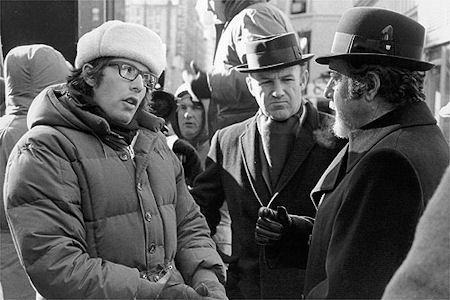 When it came to casting Frog One, there was a mix up.  Friedkin suggested “that guy who was in Belle de Jour” (with Catherine Deneuve).  The casting director looked him up, and said, his name is Fernando Rey, he’s available, and he was cast.  But, when he showed up on set, oops, that was not who Friedkin meant.  He wanted an actor named Francisco Rabal, who was unavailable.  Rey noted that much of the dialogue was in French, and he spoke only Spanish, but Rey made it work.  The great subway scene did really happen, the real person, named Jean Jehan had been a member of the French Resistance as well as the Corsican Mafia, and was well versed in creating diversions.

The film was shot in New York City, during five freezing weeks in the winter of 1970-71.  “I had seen Z by Costa-Gavras.  It made me realize you could take an actual story and make it as exciting as good fiction…it was a big influence on The French Connection. Friedkin called it “induced documentary” essentially a chase from beginning to end. (Mayer 151)

Friedkin did not want to work with any of the old-time cameramen who still held sway in Hollywood.  He found Owen Roizman, who had only done commercials before.  He told him he wanted to shoot documentary style, no lights, or big equipment trucks, and Roizman said he loved to shoot that way. Friedkin thought handheld camera looked “kind of phoney” so he rehearsed the scene with the actors but didn’t tell the cameraman exactly what was going to happen.  He cleared the crew out of the real-life locations (it’s a real police station, not a set) so that the cinematographer had to think on his feet and improvise.  Roizman was nominated for an Oscar for his first film. 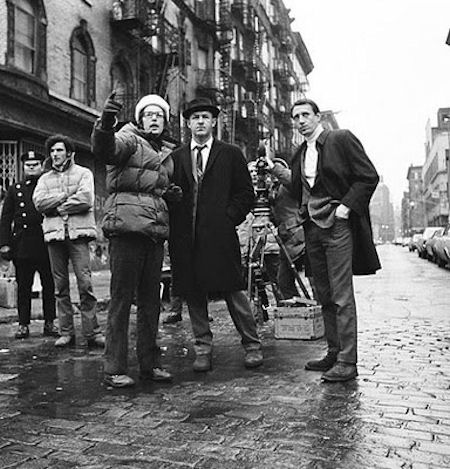 The car chase was meant to top Bullitt. The San Francisco streets had been cleared before filming began in Bullitt’s sequence.  Friedkin and the stunt driver, Bill Hickman, were inspired to have a car chase an elevated train while walking around NYC and brainstorming.  Either, the core of the chase is a single shot, with a camera mounted on the bumper, and Friedkin shooting over the driver’s shoulder.  20 blocks, 90 mph, with a siren on the top of the car, flat out, with the crashes truly accidental; the thrill of the chase constructed in the editing room. Or, Owen Roizman, contradicting the director, said the chase was carefully planned out and filmed over a five-week period. So, you may choose which version of the story you prefer. 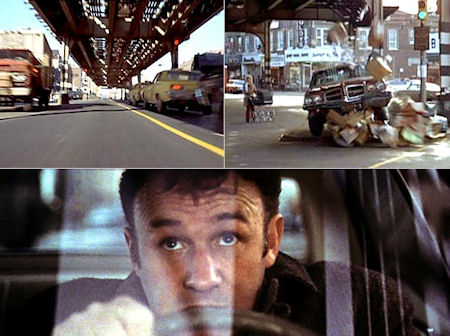 The real appeal of the chase though is not merely the thrills, but the way it illustrates the character of Popeye Doyle.  “At once likeable and bigoted, dedicated and overzealous, dependable and alcoholic, Doyle’s behavior on this chase sequence underlines the qualities of a complex anti-hero, someone whose manic drive creates all manner of chaos in his and other people’s lives” (Borden 191).

The film was a huge hit, making over $26 million in rentals, won Oscars and turned Friedkin, in spite of his abrasive personality, into a bankable director.  It was the third highest grossing film of 1972 and won Oscars for Best Picture, Actor, Director, Editing and Writing, with noms for supporting actor and cinematography.

The irony of the “true” story was that the huge cache of heroin retrieved by Doyle and Egan was stolen from the office of the NYC police property clerk and never recovered.  This fits perfectly into Friedkin’s desire to show the thin line between the policeman and the criminal. The forces of law and order are somewhat reprehensible, and the international drug dealer, who ruins the lives of countless thousands, is “civilized” according to a certain standard of behavior.  And Friedkin wants you to argue about the film’s ending.