Dressed in colorful Tehuana outfits, a part of Mexico that was traditionally matriarchal, Kahlo brought her physical pain and emotional passion alive in surrealist self-portrait canvasses.  A passion project of Hayek’s (she was Oscar nominated) she famously had to compromise for financing on Harvey Weinstein’s bed of nails. Director Taymor (Broadway’s The Lion King) uses magical realism to suggest the imaginative universe of one of art history’s few iconic women artists.  “The movie manages to break free — in bursts of color, imagination, music, sex and over-the-top theatricality — it honors the artist’s brave, anarchic spirit” (NY Times).

How many women artists can you name?  Georgia O’Keeffe and Frida Kahlo; that might be about it for many people without an extensive knowledge of art history.  Yet, Frida joined this pantheon only recently, and thanks to a trio of sources.  And, her image is everywhere now, her recognizable stare, her monobrow and crown of flowers.  There’s even a name for it, “Fridamania.”  The artist has been dead since 1954, but she has become a symbol for women artists, a symbol of protest against the patriarchy, and because of her bisexuality, a queer icon. Her adoption of the dress of indigenous Mexican populations cast her as a champion of marginalized peoples, and it was a bold statement for the privileged daughter of a Mexican mother and German Jewish immigrant father.   Many of her 200 surviving paintings are self-portraits, there is no doubt she wanted to be seen, on canvas and in real life.  You will have many opportunities tonight, during the Frida and Diego exhibit and after to buy objects with her portrait on it.  I will do it, too!  The commercial use of her image is separate from her place in art history.  We want to identify with her bold iconoclasm. 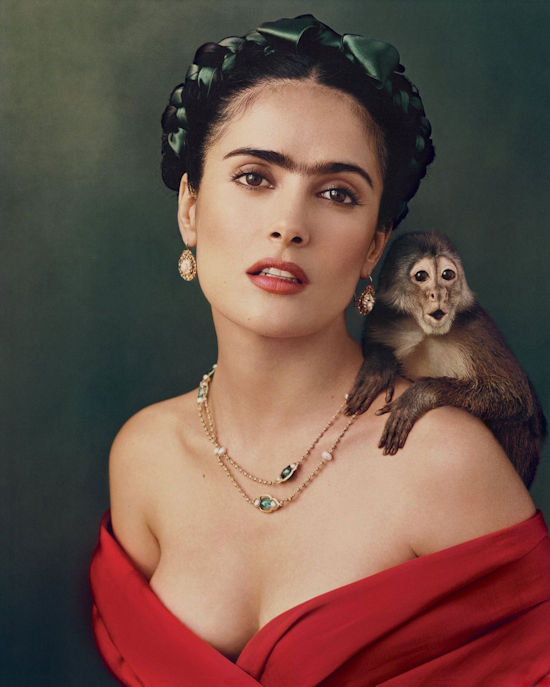 In 1982, there was a London gallery retrospective of her work, in tandem with another female artist, Tina Modotti.  The following year a wildly popular biography of the artist by Hayden Herrera was published. Another strong pop cultural influence was Madonna, who bought several of Frida’s paintings for her collection and cited her as influence and inspiration, saying she identified with her pain.  Herrera wrote an article about Frida for Artforum while she was working on her doctoral dissertation and was invited to write a biography of her.  A lively and readable book, it had a small print run, the author thought it would be of interest to only feminist scholars.  “But Kahlo’s story, one of physical suffering, passion, and emotional turmoil, had universal appeal. To those north of the Mexican border, her life, lived alongside monkeys and pre-Colombian artifacts, looked seductive and exotic. And in Herrera’s book, her art is woven seamlessly into this picture, suggesting a symbiosis between her paintings and the events of her life, much like this film, where live-action scenes often morph into the images of her paintings and vice versa. “This fluid relationship is one that Kahlo herself would attest to—her primary subject matter was herself, her love for Rivera, and her pain” (artsy.net).  Herrera’s biography began to sell, and it kept selling, eventually being translated into 25 languages.  Her skillful synthesis of Frida’s personal story and her art made it a global best seller.  Now, there are two corporations that license her image, which has appeared on cosmetics, tequila, jewelry, credit cards, stamps, fabrics, a Snapchat filter and sanitary protection.  She’s become more than an artist, she’s a brand.

Herrera’s book was first optioned in 1988 by Nancy Hardin, a studio executive who wanted to be an independent producer.  She saw Frida’s story as a striking version of a woman torn between career and personal life, as well as a sweeping love story with Diego Rivera.  When one of Frida’s paintings sold for $1.5 million, the highest auction price for a work of Latin American art, other production companies also started thinking about a biopic.

Supposedly there were twelve different Frida scripts in circulation at one time.  But, Hayek, with Hardin as a producer, was especially determined.  She met a former lover of Rivera’s Dolores Olmedo Patino, who administered the trust of Kahlo and Rivera’s art, to allow her to use images in her film.  She was the person who sought out Alfred Molina for the role of Diego, he gained 35 pounds to play the part.  When financing faltered, Miramax stepped in, attaching Julie Taymor, wildly famous for her stage version of The Lion King, as director.  The screenplay had several hands, including writer/ director Gregory Nava and his wife Anna Thomas (author of The Vegetarian Epicure!) and, uncredited Edward Norton, who plays Nelson Rockefeller in the film.

What seemed like a blessing, quickly turned into a curse.  Weinstein had an ulterior motive.  He sexually harassed Hayek constantly, threatening to give her dream project to somebody else if she didn’t comply.  Eventually, cowed by his rage and threats, she agreed film a sex scene with another woman because without it she would not be allowed to finish the film.  You can read her whole sad story in her New York Times op-ed. Her success with the film is, perhaps the best revenge, even if her trauma lingers (and her account is harrowing).

Frida’s life was urban and sophisticated, but Hayek’s mother and grandmother came from the part of rural Mexico Frida celebrated in her Tehuantepec dress, a part of the country traditionally matriarchal.  And Hayek does identify with the artist, but not with her pain, with her humor.  “I don’t see her as this morbid, sad character and I’ll tell you why,” she says. “To start with, nobody paints their last painting, knowing that they’re dying, and calls that painting Viva la Vida [Long Live Life]. She would wake up in the morning and make an art form of herself; and spend hours decorating herself to go to the market to buy some food, you know, or to stay in the house and paint. This spirit of waking up and transforming yourself into a walking work of art – you’re not telling me this was a depressive, obscure person” (The Guardian).

If we have to wonder what she would have thought about the marketing of her image, she did love the movies, and she probably would have enjoyed having one made about her, especially one as good as Julie Taymor’s Frida.  While Diego was in New York painting murals, as you will see in the film, Frida went to the movies.  She saw Frankenstein twice, watched King Kong and loved Tarzan movies.  The first serious collector of her work was movie star Edward G. Robinson, who bought four paintings for $200 each in 1938.

Salma Hayek first gained fame as a star of the Mexican telenovela, Teresa.  Her mother was from Mexico, an opera singer, and her father a wealthy Lebanese businessman, and she had a pampered home life.  Falling in love with Willy Wonka and the Chocolate Factory, she decided to become an actress.  She moved to Los Angeles in 1991 but was frustrated with her stereotypical parts.  She ranted on a late-night Spanish language talk show, and luckily director Robert Rodriguez was watching.  He gave her a first big hit co-starring with Antonio Banderas in Desperado, which brought her to the Berlin Film Festival, even then, she wore a Frida-like Tehuana costume on the red carpet.  Frida was a hit, and was nominated for six Academy Awards, including for Best Actress; Hayek was the first Latinex actress ever nominated in that category.  Producing Frida led to directing, and other producing projects, including the American tv show, Ugly Betty.

Alfred Molina is a British actor; his father was an immigrant from Spain and his mother from Italy; they worked service jobs. Molina’s inspiration to be an actor was Spartacus.  He went to drama school and appeared on stage, his film debut was as Indiana Jones’ guide in Raiders of the Lost Ark; people still shout at him, “Throw me the idol, I’ll throw you the whip!”  He’s worked extensively on stage and screen, and one can only hope that after playing Doctor Octopus in Spider Man 2, he doesn’t have to worry about money anymore.

“What I respond to with Frida is her courage to be unique; her courage to be different,” says Salma Hayek, who eventually beat out Madonna and Jennifer Lopez to become Hollywood’s Frida, and whose performance in the film she produced herself has just won Hayek an Oscar nomination for best actress. “She lived her life exactly as she wanted and never apologized. She was bisexual at a very young age – well before she was in a group of people with whom it would have been more accepted. I think she got caught with the librarian of her school right before the accident…She herself, the self she made, was a fantastic concoction” (The Guardian).