Funny Face is one of my favorite Audrey Hepburn films and one of my favorite musicals, period. It’s said that more people became fashion designers after seeing this film than any other. It’s a perfect blend of stunning Paris locations, the extraordinary wardrobe designed by Givenchy and the fantastic images by Richard Avedon in the style he pioneered for Harper’s Bazaar and Vogue. The songs are (mostly) by the incomparable George Gershwin, and as a special bonus, comic support is provided by cabaret star Kay Thompson. It’s a compelling fantasy to be able to live in this particular cinema world, although perhaps one would wish for a more age appropriate partner than Fred Astaire (57) for the gamine Miss H (27). But, that was her fate, to be paired with men old enough to be her father in her best films, Humphrey Bogart (Sabrina) Gary Cooper (Love in the Afternoon) Cary Grant (Charade) and so on.

There was a Broadway musical in 1927 called Funny Face, and it starred Fred and Adele Astaire (his sister) in a tale of an Atlantic City jewel heist. The old book was forgotten in this version, but the songs, and Fred himself, remained. Screenwriter Leonard Gershe wrote a stage musical called Wedding Day, based on photographer Richard Avedon, a friend, and a (fictional) reluctant model/wife. Roger Edens and Gershe met when they both collaborated on Judy Garland’s A Star is Born. Edens created much of the MGM musical magic at the studio; he worked on the script, the score and look of the films, and often mentored the stars behind the camera. Edens, who was well versed in what made a musical a hit, saw something in the unproduced script. Then, director Stanley Donan became interested. When they realized some of the old Gershwin songs could be repurposed, the coffee pot began to percolate.

But, who would play Jo Stockton? MGM contract players included Leslie Caron, who had just co-starred in Daddy Long Legs with Astaire, and she looked so young next to him he had been accused of robbing the cradle. Debbie Reynolds or Cyd Charisse weren’t right. Grace Kelly was marrying a Prince and leaving Hollywood. Carol Haney, a Broadway dancer who worked with Gene Kelly was unknown, and her quirky looks kept her mostly behind the camera (except in the wonderful Pajama Game). Gershe read an interview in a magazine where Audrey Hepburn said she’d love to do a musical one day, and negotiations began with Paramount to star her opposite one of her childhood idols, Fred Astaire, who was not under contract to MGM, either.

Hepburn’s agent had turned it down, but luckily someone sent a script to her directly, and she loved it. “I read it in Paris and I fell in love with it. It was a charming story, plus I knew I would get to dance with Fred Astaire” (Keogh 89). Her mother later told screenwriter Gershe that it seemed as though it had been written by someone who really knew her daughter. Astaire, for his part, felt it might be the only chance he would ever get to work with Hepburn. “So, I just told my agents to forget all other projects for me. I was waiting for Audrey Hepburn. She asked for me, and I was ready” (Astaire 315). 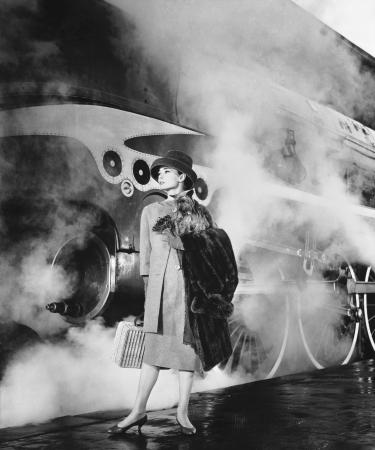 Maggie Prescott, the chic and demanding editor of Quality magazine (based on famous fashion editors Diana Vreeland and Carmel Snow) would provide the screen debut for cabaret star Kay Thompson, long an MGM vocal coach and arranger, a great friend of Judy Garland, and Liza Minelli’s godmother. Today, she is best known as being the author of the Eloise books, about a naughty little girl who lives in the Plaza Hotel. She would coach Hepburn in her vocal technique, and unlike My Fair Lady, Hepburn does sing her own songs, quite delightfully.

The high fashion Parisian wardrobe would not be designed by Paramount head designer Edith Head, who by contract got credit for designing every Paramount A picture. She was an excellent designer, but also a master strategizer, solidifying her position at the studio with her superior relationship and hierarchy skills. She had blithely accepted an Oscar for the clothes in Sabrina actually designed by Hubert de Givenchy, which infuriated Hepburn. But, in this film, he would clearly be credited for Hepburn’s wardrobe, with Head designing Thompson’s and the rest of the cast. Needless to say, behind the scenes, Head fumed. She did not even get to design the camel hair coat that Thompson wears in “Bonjour Paris,” that too was a Givenchy design. She did contribute the Thompson’s suit, “a short skirt and a long jacket” as Cake would say, with a distinctive sailor collar, in several different incarnations. She designed the “Think Pink” number with her characteristic look beyond current fashion, unlike Givenchy, who designed, not for the screen but for the chicest women in the world. The film was nominated for an Oscar for best costumes, but didn’t win! 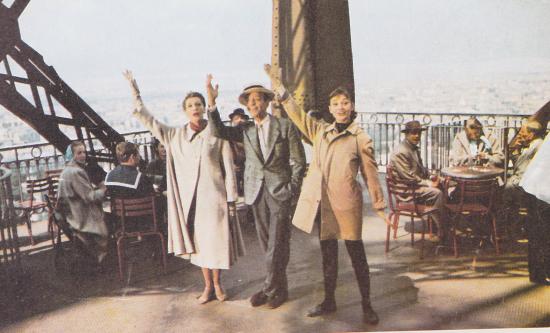 The clothes influenced fashion, but perhaps no outfit as much as the slim black slacks and sweater, worn with black flats and white socks that Hepburn wears as a beatnik. That outfit created an uproar on the set when Hepburn protested, saying the outfit should have black socks. But, Donan knew that she would disappear on screen without the contrasting flag of color. As strongly as she protested, when she saw it on screen, she admitted that Donan had been right. “You were right about the socks. Love, Audrey” (Keogh 97). 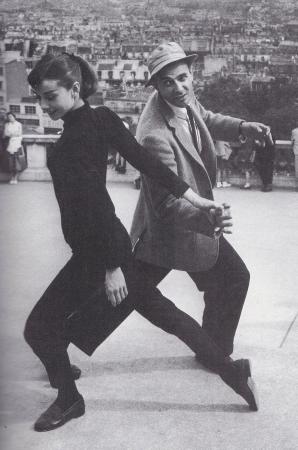 Hepburn was extremely nervous about meeting Astaire, and had been training with a dance coach before she met him to refresh her dormant ballet skills. “I remember he was wearing a yellow shirt, gray flannels, a red scarf knotted around his waist instead of a belt, and the famous feet were clad in soft moccasins and pink socks. He was also wearing that irresistible smile. One look at this most debonair, elegant and distinguished of legends and I could feel myself turn to solid lead, while my heart sank into my two left feet. The suddenly I felt a hand around my waist, and, with his inimitable grace and lightness, Fred literally swept me off my feet. He said, ‘Come on, let’s have a little go together’ and we just danced around together. He just took me and turned me around, or whatever. It was such fun, it was so divine. We were laughing and having fun…”(Harris 138). 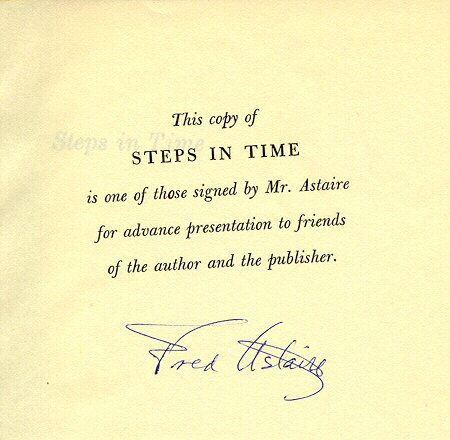 Mr. Astaire’s autograph in his autobiography, which my father obtained for me from one of his accounting clients.

Of course, this was only the beginning. Rehearsals lasted for hours and hours. As you can see from the film, the style of the musicals of this era was to shoot in extremely long takes. That meant the rehearsals were endless, and the camera takes relatively few.

Choreographing his own dances was always a priority with Astaire. “I hadn’t the remotest idea what sort of dances to put in the show at that point. Luckily, I ran into one useful thought while experimenting for a solo I was to do. Arriving at the studio one morning in a raincoat, I was improvising in fron of the mirror, dancing in it, and noticed that the coat moved rather well. I kept on for some time as my friend Walter Ruick ad libbed some Spanish music on the piano, for which I took off my raincoat to use it as a bullfighter’s cape. From that was born the mock bullfight dance solo for the ‘Let’s Kiss and Make Up’ song” (Astaire 315).

Astaire was making his first film since his beloved wife, Phyllis, had died of lung cancer, two years before. He was sensitive about looking so much older than Hepburn, so Donan arranged that there would be a minimum passionate kissing or embracing, that all the romancing would be through song and dance, where Astaire was ageless… ” no one suited Fred better. They were a match. Fred would assure Audrey that she was a wonderful dance partner, and she would assure him that he was not too old for her. What held it all together was the fact that each thought the other was near perfection. They were both right” (Vogue 466). Astaire said, “That picture was such a complete joy that we all hated to see it end” (Astaire 316). The joy appears to translate to the screen.

Richard Avedon was the film’s visual consultant, as well as the photographer of all the stills supposedly shot by Astaire’s character. He did many photo sessions with Hepburn for many different magazines and maintained that she was difficult to photograph, “I couldn’t lift her to greater heights. She was already there. I could only record. I could not interpret her. There was no going further than who she was. She paralyzed me. She had achieved in herself the ultimate portrait” (Harris 140).

The sequence that nobody ever forgets shows her hiding behind the Winged Victory of Samothrace in the Louvre, and skimming down a staircase with a red chiffon scarf floating behind her. “I thought I would slip and break my neck because I was wearing high heels and there were about thirty marble steps to maneuver without looking down at them. I made up my mind I was going to do it in one take, and I did, but I think it was just good luck, actually (Harris 141). 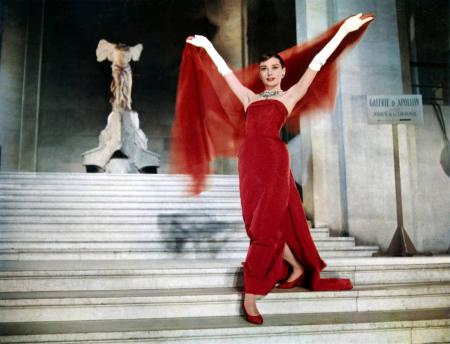 Rainy Parisian weather played havoc with the shooting of “Bonjour, Paris” and the ending scene shot by a misty Chantilly chateau was so wet that everyone became frustrated with slipping in the muddy grass. In the Parisian night club scene, the quarrelling couple is played by MGM’s Roger Edens and Audrey’s mother, Baroness Ella Van Heemstra. Marion is played by one of the 1950s top models, Dovima, who posed for some of Avedon’s most iconic images. She did indeed like reading comic books. Born in Queens, her name was a combination of her three given names, Dorothy, Virginia and Margaret. In the “Think Pink” montage, two of Avedon’s other favorite models appear, blonde Sunny Hartnett and redhead Suzy Parker. 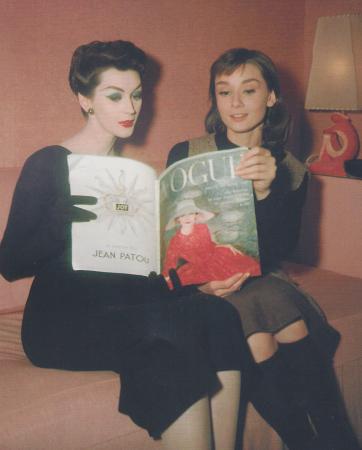 The film cost $4 million and was only a modest hit, perhaps too sophisticated for its day. But, as inspiration for the ultimate in high fashion euphoria, Funny Face has no comparison. Few would dispute the opinion of John Cutts in “Films and Filming” “Funny Face is one of the loveliest musicals ever made” (Nourmand 64).