When I was in junior high school in Cleveland, Ohio, in the late 1960s, I loved Gone With the Wind. I read the book over and over, acted out scenes with my best friend (who could identify any scene by listening to only a few words from any sentence in the book) and longed for the day–before any home video format or cable channels–when I could see the film. I adored the epic romance and the thrilling characters. One year, she and I baked a birthday cake for Clark Gable on February 1–I still remember the embarassment of breaking one of her mother’s mixing bowls. The racial issues didn’t bother me, for in my mostly Italian and Eastern European neighborhood, I had never met an African American person (except for Callie, who cleaned our house) and the history of the Civil War and Reconstruction was pretty much as I had been taught in my classes at school, the textbook dating from before the Civil Rights era.

When the film had a theatrical reissue in 1967, my girlfriend and I dressed up, bought programs (!) and relished every minute of a longed for experience. GWTW was one of the defining experiences of my adolescence (in the turbulent year 1967–so you can imagine my sheltered life!).

I recently rewatched the film for the first time in many years and it was a downright peculiar experience. The text was the same; I knew every scene, every line, every costume. But, the meaning has changed.

Is any film heroine less attractive than Scarlett O’Hara? She’s spoiled, self-centered and conniving. The book review in the New York Times described her as “selfish, unprincipled, ruthless, greedy and dominating, but with a backbone of supple, springy steel. She’s a memorable figure in American fiction.” Her family is Irish, with that motivating Irish love of the land, their plantation, Tara. They are also clearly Catholic (a detail I missed, the Yankees stole her mother’s rosary) and she is portrayed as having a somewhat of a drinking problem. The only time she’s admirable is after she returns home after the war and whips her sorry family back into shape again.

Rhett is dashing, heroic and all that, but his weakness for Scarlett is almost inexplicable since she treats him so horribly. Her obsession with Ashley Wilkes is mystifying, but now I see him less as a character and more of a symbol of the “gallantry” of the Old South, and her love for him indicative of her reluctance to renounce all ties with the enslaved worder-based economy. I also see characters as motivated by sexual denial. When Melanie can’t have any more babies, and Scarlett doesn’t want to, for “nice” girls in the 19th century, that meant no more sex with their husbands. Power and punishment. No wonder both Ashley and Rhett are a little on edge.

The treatment of the African American cast is interesting. Slave owners are kind, slaves are grateful, yadda, yadda, yadda. Yet, Hattie McDaniel (Mammy) the first Black actor to win an Oscar, Butterfly McQueen (Prissy) and Everett Brown (Big Sam) create real characters. Opportunities for actors of color were limited during the studio era, and many played stereotyped roles in exchange for a paycheck in their chosen profession. Or, as Hattie McDaniel said, “I would rather play a maid, than be a maid.”

What was it about Gone With the Wind that resonated so strongly with the 1930s reading public? I pointed out to my daughter that when audiences went to see the movie, they knew every character’s name, and had an image to go with them. She said, “Like Harry Potter” and that is an excellent analogy. It’s hard to believe now that it really mattered who played, not just the lead, but Aunt Pittypat, Belle Watling, India Wilkes, and that the casting of now only fleetingly remembered character actors seemed earth-shaking to 1930s audiences. Perhaps the reading public adored the story because the devastation of the Depression seemed similar to the economic loss and restructuring that occurred after the Civil War. And of course, the last of the Civil War veterans were still alive when the book was published in 1936, and families were treasuring the dwindling oral histories from those who had lived through the experience. Margaret Mitchell, the author of the novel, credited her own family tales for inspiration.

The search for Scarlett was the largest talent search ever conducted for a film role. The process lasted three years, 1400 actresses were interviewed, and there were 90 screen tests. Actresses who often played strong-willed characters, like Bette Davis and Katharine Hepburn were considered front runners, but were soon passed over. Paulette Goddard was at one time the leading contender, but the fact that she was living with, but not married to, Charlie Chaplin presented a moral conundrum to the publicity team. Of course, the fact that Clark Gable was living with, but not married to, Carole Lombard was less of a problem, and when Vivien Leigh was cast, the fact that she was living with, but not married to Laurence Olivier was overlooked. Vivien Leigh is fantastic. She allows you to sense every thought that crosses Scarlett’s mind and resists the impulse to make her too sympathetic. It is impossible to imagine a more perfect actress in the role, as the available screen tests prove. Clark Gable never played a better part. I adored every role he played as a teen, but now prefer him now in his more feral roles, like in Red Dust or in delightful It Happened One Night. He did not want to cry in one scene, considering it to be unmanly, but was persuaded by Olivia De Havilland that it showed strength, not weakness of character. Leslie Howard was another teenaged favorite, but Ashley is so bloodless, and whiny, I just want to smack him. Howard apparently had similar feelings for his character. I admire Melanie much more now, and in fact De Havilland matches Leigh quite well in a blander part. De Havilland felt it demanded more of an actress to play a good girl, and she played enough of them to know. She is particularly appealing in the scene after Scarlett shoots a Yankee marauder. The acting throughout the film is uniformly excellent.

Victor Fleming replaced George Cukor as director shortly after filming began. Cukor was selected because he had done some successful costume films, like David Copperfield, and Little Women, with Katharine Hepburn as Jo. Bob Thomas’s text in my souvenir program states, Clark Gable “felt that George Cukor, although an able director, was devoting more time and attention to the women in the cast. Gable was more at ease after Cukor had been replaced by Victor Fleming, whose style the actor was completely familiar with.” Meaning, Cukor was gay, Gable wanted him off the picture, he was the biggest star, so be it. The actresses continued to consult Cukor in private, and some of his scenes, for example the birth of Melanie’s baby, remained in the final film. At one point, five units were filming, including scenes directed by Sam Wood and Sidney Franklin, not to mention those supervised by Yakima Canutt, who knew more about stunting than anyone in Hollywood. He drove the wagon in place of Rhett Butler during the burning of Atlanta, as well as being Scarlett’s attacker in her drive through Shantytown.

Sidney Howard received sole credit, and an Oscar, for the screenplay. The epic condensation of the 1037-page novel, which had to retain universally beloved dialogue, was in fact crafted by a team that included F. Scott Fitzgerald, Ben Hecht, Charles MacArthur, John Van Druten and many others. Ironically, Howard was unable to accept his Oscar, he died in a tractor accident on his farm before the ceremony. GWTW was the first American film of the Hollywood Production Code era (which began in 1934) to contain the word “damn” because of its status as “a famous line of literature. If you prohibit its use, you will make Hollywood the laughingstock of the world” insisted producer David O. Selznick. And so, Rhett Butler said, “Frankly, my dear, I don’t give a damn.”

Walter Plunkett’s extravagant wardrobe is surely one of the reasons I became obsessed with GWTW. The fancy clothes are great, but so is the dress in which Scarlett flees Atlanta, increasingly worn, later with mismatched buttons. One of the two duplicate bodices made for the earliest of these scenes was in the Real to Reel exhibit at the North Carolina Museum of History, and the print looks authentic. It turns out that producer David O. Selznick bought some genuine Civil War dresses in one of his trips to Atlanta and had a textile house in Pennsylvania reproduce the 19th century prints for the film. The company then sold licensed copies of the fabric to the public. There were 27 different bodices made for this one dress, to show the effects of Scarlett’s hardship. The famous green velvet dress made from Mama’s portières, is imaginative, especially the hat trimmed with chicken feathers and feet–and it that a wishbone? Vivian Leigh has a 1940s hairdo in the earliest scenes, but as the film progresses hairstyles are mostly in period, and distractingly dated makeup is minimal.

The production design was by William Cameron Menzies, who won the first Oscar for production design, and is responsible for the look of many great films, including one of my all-time favorites, the 1924 The Thief of Bagdad. A selection of his storyboard paintings for GWTW are also in the NC History Museum exhibit. Now, I also see how many of the Big Scenes are matte shots–only half a room, half a street, half a landscape, the rest filled in with paintings. In fact, there was a record 87 composite shots, using either paintings or miniatures. The cinematography is most interesting, with a strong use of silhouettes, perhaps to evoke this old-fashioned form of portraiture, and the strong horizon line in many of the sweeping outdoor scenes gives the film its signature visual style. The burning of Atlanta is thrilling (old sets were ignited, including the great wall of Skull Island from King Kong which you can clearly see collapse in flames) the best of the movie is before the intermission; melodrama displaces spectacle at the halfway mark.

I’ve lived in the South for more than 40 years, and the nostalgia for the lost era of the Doomed Cavaliers of the Confederacy is revolting.  Recent emphasis of white supremacy as a foundational basis for this country is a necessary revisionist education for me and many others. The racial politics of this film are abhorrent, and the depiction of the Carpetbaggers and the Klan–shockingly–hasn’t really progressed much past the racism of 1915’s The Birth of a Nation. Thirty years ago, there are many who would have called GWTW the greatest Hollywood movie of all time. When I was thirteen, maybe I would have. But those days are…you know… 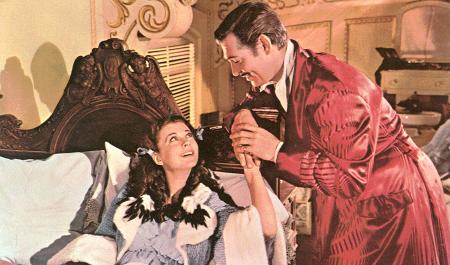 Scarlett and Rhett on their honeymoon, their happiest days. 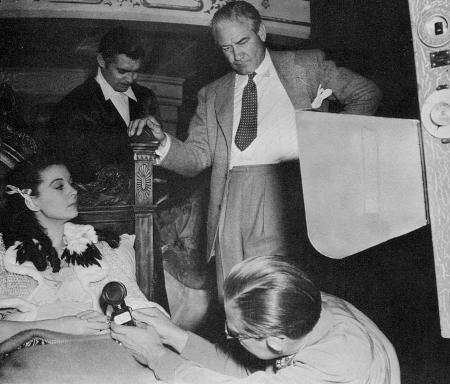 Leigh is checked with a light meter before the shot. Victor Fleming supervises. 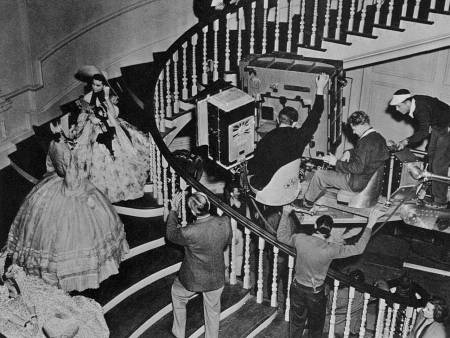 A crane captures the scene during the Twelve Oakes barbeque. 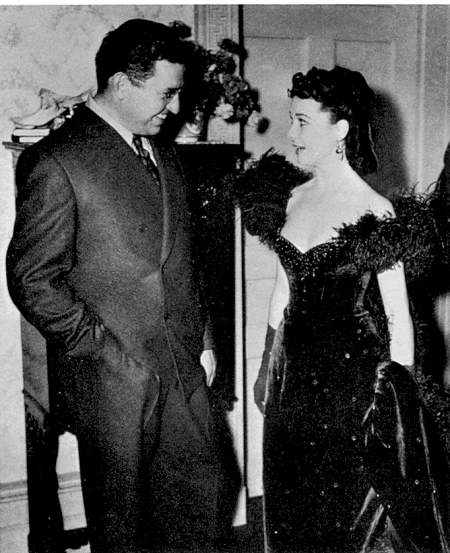 Producer David O. Selznick had the dream to bring GWTW to the screen. Here he is with his star, in her shocking red velvet dress.

All photos from my 1967 program, other sources include Scarlett, Rhett and a Cast of Thousads by Roland Flamini