A con man, not quite as silky smooth as he imagines, recruits a dancer with an unsettling resemblance to a valuable ancient Chinese sculpture for a daring heist.

I adore caper films of the 1960s.  Modelled after Alfred Hitchcock’s To Catch a Thief and Jules Dassin’s Rififi, films like Topkapi, How to Steal a Million and Gambit combined all-star casts, dazzling color locations (even if it’s Santa Barbara, CA, not Hong Kong), gorgeous costumes (Hepburn by Givenchy! MacLaine in Oscar-nominated Jean Louis cheongsams!), and clever plots to maximum effect.  Soon, with the collapse of the Production Code and dismantling of the old studio systems, cinema would get down and dirty in the late 60s and early 70s, and the winds of realism would forever blow away confections like Gambit.

Newly out on Blu-Ray courtesy of Kino Lorber, Gambit was out of print for many years and deserves to be better known.  Hollywood newcomer Caine’s charm is full on, and he is a surprisingly good match with MacLaine who had been around so long, surely, she must be quite a bit older than her leading man but is by only a scant year.

Along with the three stars, featured are Roger C. Carmel, Arnold Moss, John Abbott and other familiar faces from 1960s television, guest villains all, particularly on the original Star Trek tv universe.

Michael Caine was born Maurice Micklewhite in an impoverished area of South London.  His father hauled boxes of iced fish at Billingsgate Market, and his mother was a charlady. He often spent his school lunch money at the cinema, where he preferred American movies because they were about regular people, and not the upper classes, as British movies often were.  At 18 he was drafted into the army and sent to serve in Korea.  When he returned, he decided to pursue his dream of becoming an actor.  He found a job in a small regional theater, occasionally playing bit parts, but mostly doing just about everything backstage. From time to time, a more experienced player would give him some advice on acting, like:  it was important not just to say your lines, but to listen to what the other actors were saying.

He was part of a generation of young British actors which included Peter O’ Toole, Richard Harris, Terence Stamp, Albert Finney and Sean Connery, all of whom he knew, and all of whom found success much earlier than he did.  He thought, after a supporting part in Zulu, that his fortune was made, but he was released from the seven-year contract he had signed because the producer decided, with his curly blonde hair and long eyelashes, he looked too gay (which he wasn’t) to be a star.

Shortly afterwards, he was cast as spy Harry Palmer in The Ipcress File (he was glad to wear his glasses, so to escape the type casting that was haunting his friend Sean Connery, now forever identified as James Bond) and then in the title role as Alfie. He was surprised to be cast as the womanizing cad in the latter, because he had auditioned for the part on stage and been rejected. In fact, he got the movie part only because Christopher Plummer turned it down, so he could play in the decidedly bigger budget The Sound of Music. Caine was beginning to suspect that big plans for Alfie were afoot when he was asked to loop his lines in a Cockney accent the Americans could understand. When the latter two films were released almost simultaneously, Caine became the overnight success he had been laboring towards for thirteen lean years. He was always offended that audiences sometimes thought, especially as Alfie, he was just “playing himself” belying his hard work. 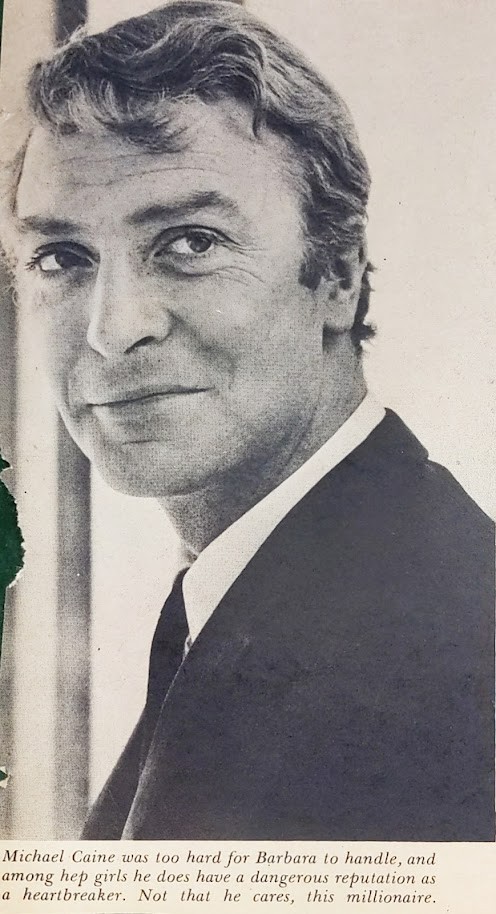 I not only had a scrapbook, but a file full of images clipped from newspapers and magazines.  Here’s an example of a fan magazine photo of Michael Caine.  His romances were intently followed. He was briefly married in the 1950s but has been married to his 2nd wife, Shakira, since 1973, 49 years, as of this writing.

He remembered, “my experience was such that every older actor I asked for advice would say, “Give it up.” Because of the class thing. Everybody thought I was gay or insane. And I just kept going. People say I’ve “retained” my Cockney accent. I can do any accent, but I wanted other working-class boys to know that they could become actors (Hill).

In his autobiographies, Caine writes at length about how, his star rising after The Ipcress File and Alfie he discovered on an American press junket that his two British starring films were widely seen In the US and had been making the rounds of private screening rooms in the movie capital.   Shirley MacLaine had the contractual privilege of selecting her own leading man and she picked Caine, and brought him back to Los Angeles for Gambit.  He modestly offers the opinion that as a relative unknown, he was cheap, but even though he liked the script, he would have done anything to make a movie in Hollywood.  She surely thought the raffish charm he displayed as Alfie would suit the character of Harry in her film.

He speaks with awe, even after so many years, of the Hollywood parties where he was stunned to meet movie stars he had idolized since his youth, and was introduced to them as a rising star, himself.  He stayed in the Beverly Hills Hotel, where he met people like Jane Russell (who invited him to a lunch hosted by the Christian Scientist Church) and John Wayne, who said, “You’re going to be a star, kid.”  Shirley MacLaine hosted a party to introduce him to the A list, starting with Gloria Swanson, Frank Sinatra, Cary Grant and Sidney Poitier.  When he arrived at Universal for the first day of filming, he found his bungalow next to Alfred Hitchcock, a dressing room larger and more luxurious than any place he had ever lived.

Shirley MacLaine was one of the doubtless thousands of children named after child star Shirley Temple.  She was born in Richmond, Virginia. Her younger brother, as you probably know, is Warren Beatty (she was born the differently spelled Shirley MacLean Beaty).  Her mother feared she had weak ankles and enrolled her in ballet classes at the age of 3.  She discovered a passion for performing and in high school also was a cheerleader and acted in school plays.  She auditioned for Broadway, and understudied Carol Haney in The Pajama Game.  In 1954, Haney skipped a matinee because of an injury, and MacLaine filled in, without a single rehearsal.  It was thought an unnecessary waste of time because Haney was famous for never missing a performance.  Producer Hal Wallis was in the audience for one of the shows and, impressed, signed MacLaine to a film contract.

She won a Golden Globe as new star of the year for her first film, Hitchcock’s The Trouble With Harry.  In 1960 she was nominated for an Oscar for The Apartment, Billy Wilder’s scathing sort-of comedy film, which won Best Picture and Best Director, among others.  She starred in Gambit during the peak of her success, although she would not win her Oscar (for her fifth nomination) until 1983 for Terms of Endearment.

Director Ronald Neame began as Alfred Hitchcock’s assistant cameraman on Blackmail, the first talkie made in England.  Neame’s career stretched over 70 years and included being part of the Cineguild with David Lean, he was nominated for an Oscar as a writer on two of their most famous films, Great Expectations and Brief Encounter.  He was an important mentor for Alec Guinness in his film career, won Maggie Smith an Oscar for The Prime of Miss Jean Brodie, and capsized the cruise ship in The Poseidon Adventure winning Shelly Winters her Oscar.

Michael Caine wrote in the introduction to Neame’s autobiography, “It’s a very nerve-wracking thing making your first big movie in a foreign country, when you’re a British actor with a big American movie star.  If I’d had some kind of yelling and screaming director it would have been terrible.  Instead, I had this extremely kind, very sensitive English gentleman, and I thank God to my dying day he directed that picture with me (Neame xi).

The film was based on a short story by Sidney Carroll called “Who is Mr. Dean?”  The screenplay was by Alvin Sargent, who had a background in tv; this was his first feature film.  He would go onto a long career, including the screenplay for the delightful Paper Moon, and winning Oscars for Ordinary People and Julia. MacLaine said it was her idea that her character not speak until almost half an hour into the film.

Her character is described as partly “Eurasian” a politically incorrect term for a person of mixed race.  The major snafu on the film was the decision, now regrettable, to tape MacLaine’s eyelids to give her an Asian look, a common practice at the time, and not her only experience with this racist make-up.  The hot lights melted the glue holding her taped eyelids and production would have to stop for a lengthy make-up redo.  The majority of the film takes place in a mythical French-Arab city.  But the culture is treated respectfully, on the whole.  Is British-Czech actor Herbert Lom in brown-face make-up?  It seems that way, but sometimes the pancake make-up that actors wore for old style Technicolor makes everybody’s skin look strange.

Neame remembered, “It was certainly a happy film, however, I must admit some days it became frustrating when Shirley, Herbert (Lom) and Michael got into laughing mode.  Their humour was vastly entertaining and I realized it was a way of keeping their energy high and of relieving tension, but I had the responsibility of delivering a film that was already behind schedule.  Shirley was the ringleader and there was one occasion I had the awkward task of having to ask her to stop being funny” (Neame 212).

I loved this movie so much when I saw it that I pasted two pages of newspaper photos into the scrapbook I was keeping at the time.  I saw the film not long ago on Turner Classic Movies, and was stunned to discover at one key point, after so many years, I still knew exactly what Michael Caine was about to say. 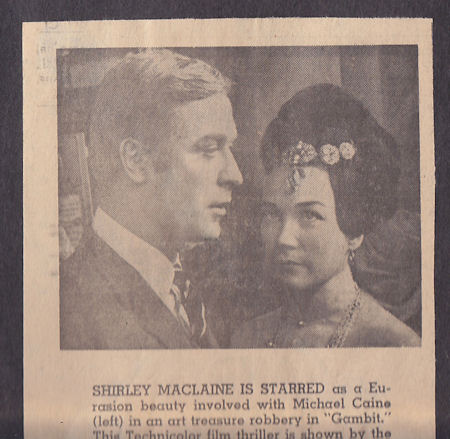 The outdated racist term, Eurasian or, as here Eurasian was used to describe MacLaine’s character Nicole. 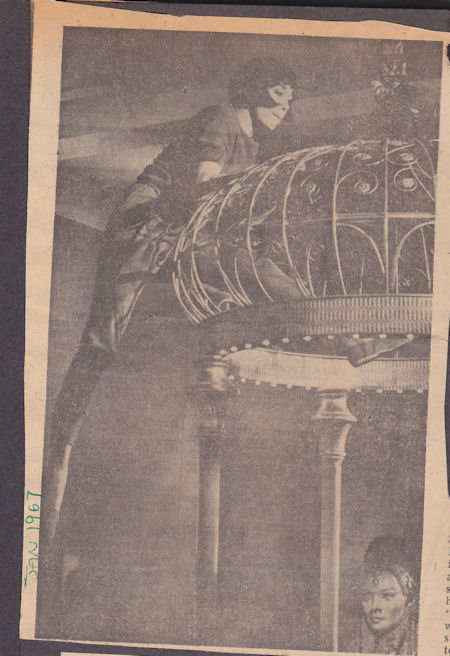 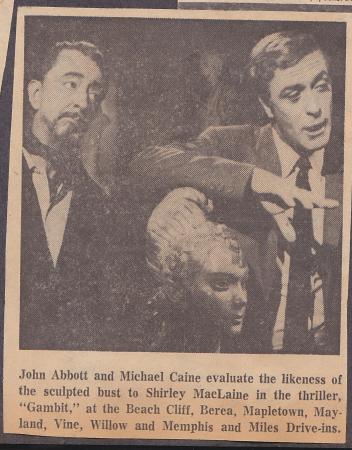 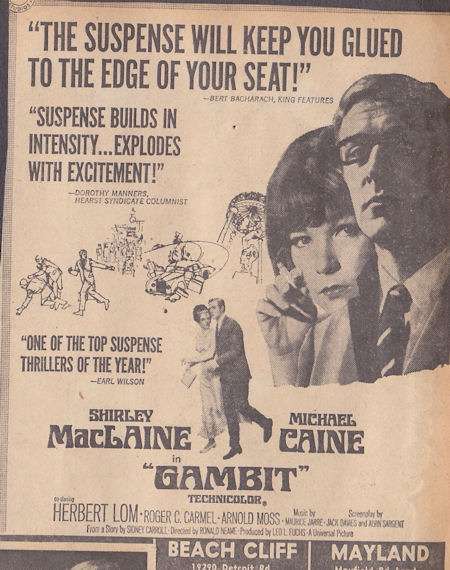 I would have seen this as the Mayland theater on Mayfield Road, one of the two within a mile walking distance of my house. 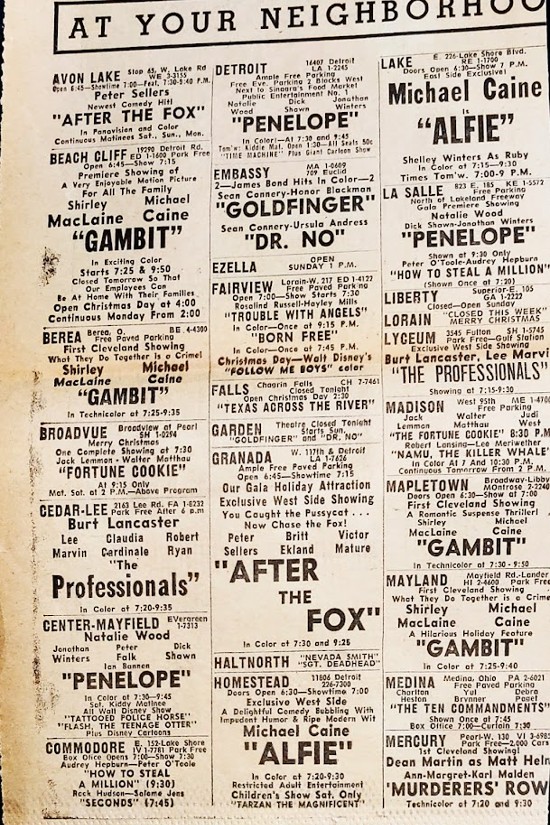 This is only half the daily listing of movie theaters in Cleveland OH on December 23, 1966.  Gambit is first run, but you can still see Caine in Alfie.  There are first runs, but lots of revivals!  Goldfinger is new, but is in a double feature with Dr. No.  Adult films have kid matinees.  A lot of choices!

Moviediva’s teen-aged scrapbook, What’s It All About? By Michael Caine, The Elephant to Hollywood by Michael Caine, www.wikipedia.org, “Influences:  Michael Caine” by Logan Hill in New York April 27, 2009, Straight From the Horse’s Mouth: An Autobiography by Ronald Neame.